Advertisement
Ad
What the UFA market means for the Canucks, Edler’s new deal, the Flames’ offer, and more: Around the League 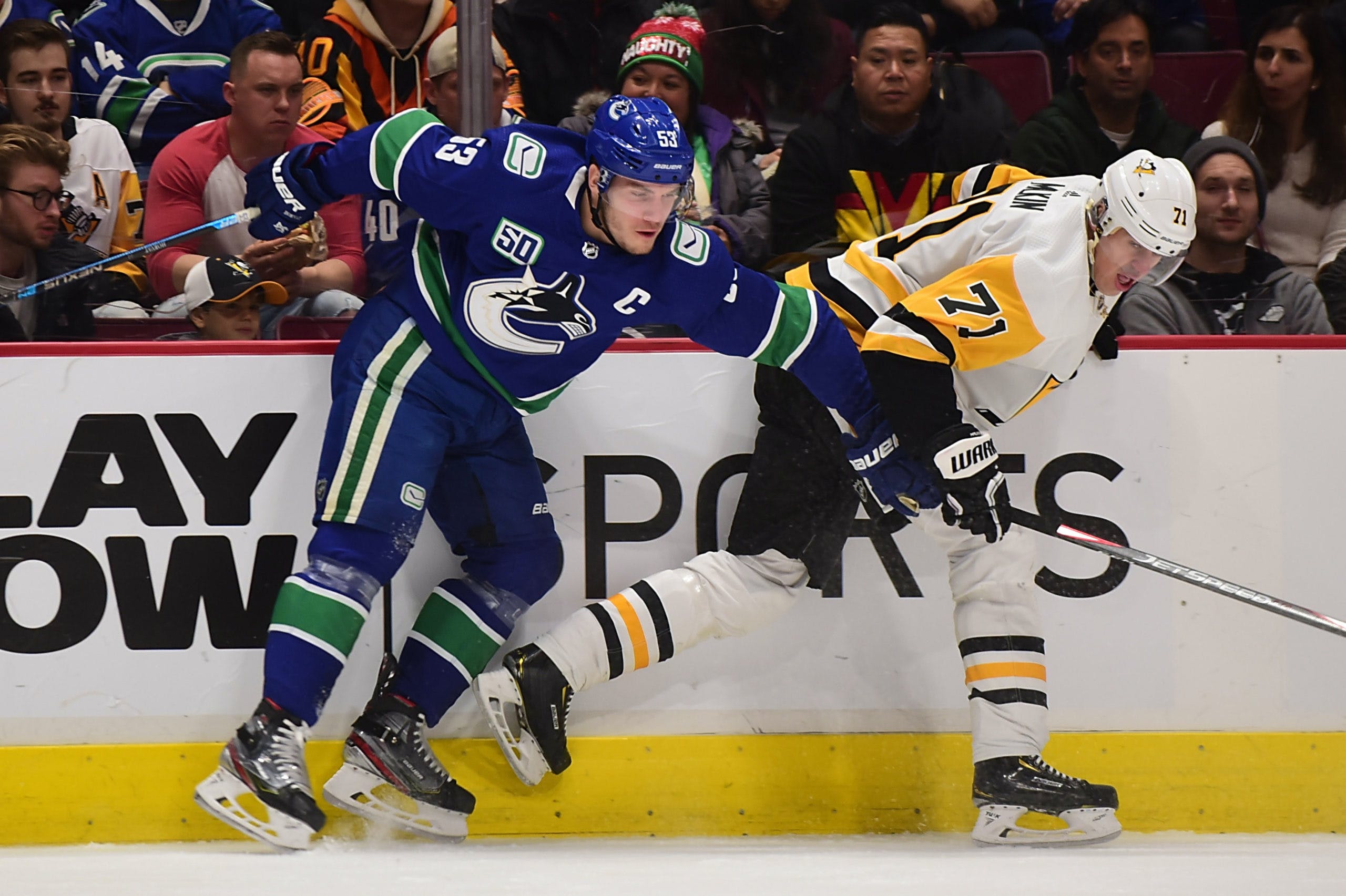 Photo credit: © Anne-Marie Sorvin-USA TODAY Sports
By David Quadrelli
6 months ago
Comments
Welcome back to Around the League, a column in which we update you on all of the happenings around the NHL through a Canucks-focused lens.

For the first time in his already Hall of Fame-worthy career, Evgeni Malkin is set to hit free agency.

Breaking: Sources say Evgeni Malkin has decided to go to the open market on Wednesday. Malkin has never been a free agent before and wants to see what his options are.

Today, Jim Rutherford told Sportsnet’s Iain MacIntyre that he doesn’t think the Canucks will be able to go big game hunting in this year’s free agency, so, despite the Pittsburgh connection, Malkin signing with the Canucks appears to be nothing more than a pipe dream at this point in time.
What’s more important, however, is that the Pittsburgh Penguins, who would like to remain competitive, just entered the market for a high-scoring centre to play behind Sidney Crosby.
You knew we were going to say it.
Could J.T. Miller be a fit?

Tyler Motteis set to hit free agency tomorrow, and didn’t shut down the possibility of a reunion with the Canucks in a recent interview with Don Taylor and Rick Dhaliwal of Donnie and Dhali – The Team.
Advertisement
Ad
Advertisement
Ad
“Yeah absolutely, I think there’s 32 possibilites at this point in time,” said Motte with a laugh. “There’s definitely some that stick out more than others, for many reasons. As you get older, it’s not just about playing hockey — it’s about having a family, lifestyle, and those sorts of things as well. I’m looking forward to going through the process for the first time and finding the right fit.
Canucks goaltender Thatcher Demko attempted to give Motte a “different reason” to return to Vancouver when Motte posted a thank you message to Rangers fans on Instagram:
Demko makes a great point.

Thank you, Duncan, for the invaluable veteran leadership you brought to the team during the 2021-22 season & congratulations on an outstanding @NHL career!

It’s a bittersweet moment for Canucks fans, who didn’t realize that this past season would be their last chance to boo Keith every time the puck graced his stick on Rogers Arena ice.
Advertisement
Ad
Advertisement
Ad
Further, Keith officially retiring means that the Oilers will get out of the last year of his contract, meaning they’ll gain $5.538 million in cap space.
So those are the bitter parts.
The sweet part — which if you think about it, is rooted in bitterness — is that Chicago will now face a salary cap recapture penalty, just like the Canucks did for the past three seasons in the aftermath of Roberto Luongo retiring.

If you were wondering how this works, long-term backdiving deals were outlawed. So Chicago gets hit with a penalty for the years Keith played at a salary cap hit that was ultimately ($7.4 mil total) under what he was actually paid in cash over time.

The Flames’ big offer to Gaudreau

My sense is #Flames have put an offer on the table for Johnny Gaudreau – north of $10 mil x 8 years – that would make him not only highest-paid player in Calgary franchise history, but among richest in #NHL.

If Gaudreau walks, it likely won't be because of money.

Gaudreau put up 115 points this past season and reached 40 goals, making him one of the biggest names out there in free agency, should he choose not to sign with Calgary.
As Seravalli points out, if Gaudreau doesn’t return to the Flames, it likely won’t be because of money. Gaudreau has been linked to a number of teams, including the Philadelphia Flyers and New Jersey Devils.
Advertisement
Ad
Advertisement
Ad
If you’re a Canucks fan, the possibility of Gaudreau being traded out of the Pacific Division probably sounds pretty good, but don’t discount the possibility of the Flames hamstringing themselves by overpaying for a player coming off of a career year, either.

The Rangers are linked to Nazem Kadri

Nazem Kadri has been linked to the New York Rangers in a big way.

Seravalli on Kadri: I think for sure it's an AAV that starts with an 8…I've heard repeatedly that one team that has set Kadri above and beyond on their list is the Rangers.

Here’s what Arthur Staple of The Athletic had to say about the potential of the Rangers signing Kadri and, you guessed it, trading for J.T. Miller:

“The Islanders nearly snuck in at the draft to grab J.T. Miller from the Canucks, but that deal fell apart on the draft floor and the Isles pivoted to acquiring a top-four defenseman in Alexander Romanov. Miller is still a Canuck, and his contract ask is still likely in that Kadri range or above, though Miller has one year left on his deal. If the Rangers can’t figure out a way to make a Kadri contract work, would they give up significant assets in a Miller trade and wrestle with the same problem a year from now?”

So far, the Canucks haven’t been offered anything that’s moved the needle on a Miller trade. They’re being patient, and ultimately, are hoping for a scenario like the one outlined here.
A team loses out on a UFA, and in an attempt to still improve their team and land a big fish, they buck up for Miller.
Advertisement
Ad
Advertisement
Ad
Whether it be an extension or a trade, will something finally happen in this saga in the coming days?

In other news, former Canuck Alex Edler has re-signed with the Los Angeles Kings.
Edler’s new deal is for one year at $750,000 and features a games-played performance bonus of an additional $750,000.
While with the Canucks, Edler exceeded 30 points in a season eight times. He scored eight goals and 33 points in just 51 games with the Canucks in 2010–11 before appearing in all 25 games in the team’s run to the 2011 Stanley Cup Final.
Edler has appeared in 966 regular-season games with the Canucks and Kings during his career, totalling 102 goals and 428 points. He, along with all NHL players older than 35, is eligible to sign a contract with bonuses because of his age.
Advertisement
Ad
Advertisement
Ad
More from CanucksArmy: