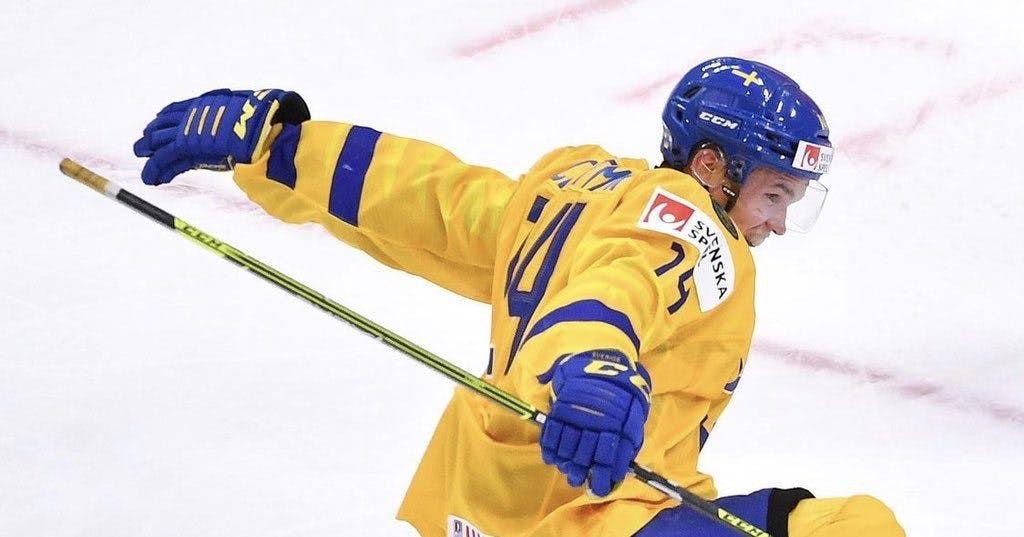 Photo credit: ccmhockeysverige on Instagram
By Stephan Roget
1 year ago
Comments
We’re already three prospects deep into our annual CanucksArmy Prospect Rankings, and we’re not slowing down until the list is complete.
If this were a British or Australian blog, one might say we’re turning the dog days of summer into the sprog days of summer, because we’ve got a bevy of young would-be Canucks to discuss, rank, and analyze.
Next on the docket: Arvid Costmar, whom Vancouver selected at 215th overall in the 2019 NHL Entry Draft.
Height: 5’11”
Weight: 179 pounds
Age: 20
Position: C
Handedness: Right
2021/22 Team: Linköping HC (SHL)
When we last sat around the CanucksArmy campfire to hash out the cupboard, Costmar came in at #15, so he’s moved up a few spots despite another draft class entering the picture in the interim.
That’s testament to a 2020/21 campaign that, although eventually interrupted by injury, gained the Swedish pestilent plenty of positive attention from prospect-watchers — and plenty of negative attention from opponents.
Advertisement
Ad
Advertisement
Ad
We’ve already extolled the upward potential of Lucas Forsell, the Canucks’ most recent seventh round pick and our current 15th ranked prospect. Much like Forsell, Costmar was one of the youngest players in his draft class, still just 17 years old when the Canucks called his name.
At the time, the book on Costmar was decidedly mixed. His defensive instincts were said to be strong, but his offensive skillset left plenty to be desired. He was a quick skater whose feet were always moving, but he didn’t have exceptional top-end speed. He was feisty and competitive with games on the line, but had a tendency to lose focus and wander at either end of the ice.
More than anything, however, scouts talked about Costmar’s intelligence, which ran from his vision right down to his hands and the sticks they held. When he had the puck, Costmar was said to be more than capable of making clever plays and opening the offensive zone up for his teammates. When he didn’t, he had an impeccable knack for gumming up lanes, picking off passes, and turning the puck back in the other direction.
Advertisement
Ad
Advertisement
Ad
He seems a natural fit for the penalty kill, and his particular brand of offence had made him a power play staple at lower levels.
Costmar’s 2020/21 season was one in which he heavily reinforced the good in his game, while also putting in some work to smooth out the questionable.
At the J20 level, Costmar once again dominated. In 2019/20, he’d notched 50 points in 29 games to lead the league in PPG, and in 2020/21 he upped that rate to a nice, even 2.00 with six points in three games. That earned him time with Linköping’s SHL squad, where his production hit a bit of a snag: just one goal through 22 games as a fourth line center. But Costmar adjusted well to the pace of Sweden’s top pro league, and his increasingly apparent capabilities as a matchup pivot earned him a spot on the country’s entry into the 2021 World Junior Championships.
Advertisement
Ad
Advertisement
Ad
The tournament marked the first viewing of Costmar for most in the Vancouver fanbase, and it was certainly a memorable one. He spent much of Sweden’s game against Russia firmly in the grill of the Russian captain — and fellow Canucks prospect — Vasily Podkolzin, earning the ire of the much larger winger on several occasions.

Vasili Podkolzin and Arvid Costmar, both @Canucks prospects, going at it in the #WorldJuniors.

Podkolzin wasn’t the only opponent annoyed by Costmar, either.

Ya, Arvid Costmar is part rat but he’s our rat… #Canucks

Arvid Costmar is such an annoying player to play against.

Costmar played on both special teams for Sweden, picking up additional responsibility when some of his higher-ranked teammates suffered injuries. The coaching staff would go on to award him as one of their top three players in the tournament.
Advertisement
Ad
Advertisement
Ad
Theoretically, this WJC coming-out party should have boosted Costmar into a strong second-half in the SHL, but it was not meant to be. Just two weeks after returning from Edmonton, Costmar suffered a shoulder injury that would ultimately keep him out for the remainder of the season.
Though undoubtedly frustrated and disappointed, Costmar maintained a positive attitude and spent the intervening months rehabbing and adding muscle to his somewhat spindly frame. By the time Linköping began on-ice training again in early August, Costmar was ready to roll, telling our own Chris Faber that “I’ve been working hard to get my shoulder stronger and agile as possible. It now feels really good, it feels like my shoulder and body are in good shape and I am very ready for hockey.”
Back to full health, Costmar hopes to move into a middle-six role for the 2021/22 season, along with becoming a go-to power play option for Linköping. Based on roster projections, he’ll receive those opportunities, and as such should see his SHL production improve by leaps and bounds.
Advertisement
Ad
Advertisement
Ad
Scoring more is something that Costmar will have to do as he tries to earn a contract from the Vancouver Canucks — even shutdown specialists need to put up respectable numbers in lower leagues to have a chance at cracking the big leagues. But any NHL future for Costmar will come in the bottom-six, so he can’t afford to sacrifice any of his defensive prowess in the hunt for goals and assists.
Maintaining that two-way balance is the key challenge for Costmar moving forward, and thankfully it’s one that he seems eminently up for.
Those old worries about Costmar’s game-to-game competitiveness and consistent focus? Out the window. The hockey world at large now recognizes Costmar as a player who brings it on a nightly basis, regardless of the opponent.
The only question left is what “it” is, and if it will be enough to propel him into the long-term picture of the Vancouver Canucks. Questions remain about his footspeed, the upper ceiling of his skill, and whether he’ll be able to keep shutting the opposition down when the opposition becomes universally bigger and faster.
Advertisement
Ad
Advertisement
Ad
If it all comes down to effort, desire, and attitude, however — as it often does — then Costmar is as safe a bet as any other seventh-round pick.
And if not, at least he’ll build up a solid list of enemies along the way.