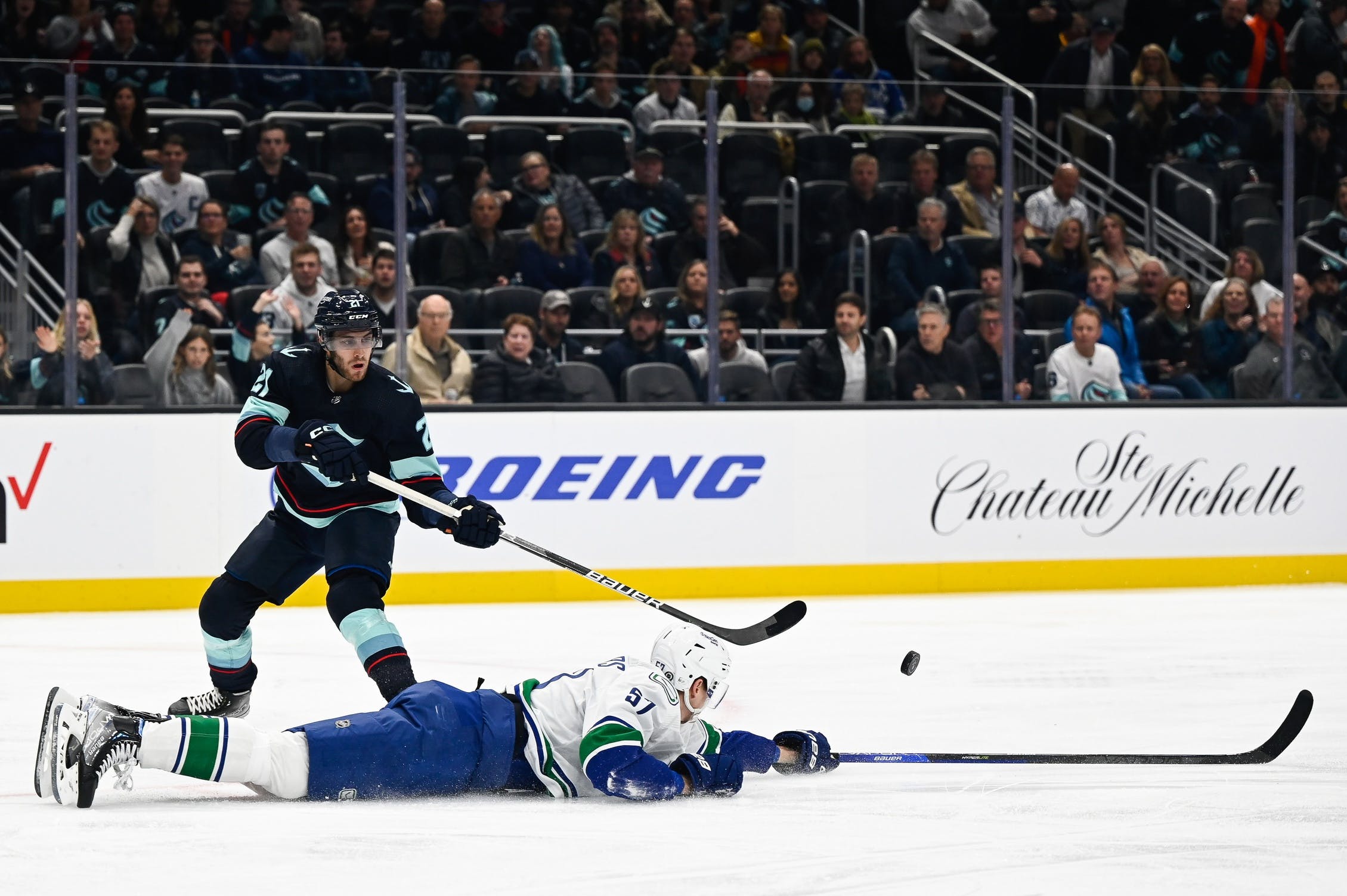 Photo credit: © Steven Bisig-USA TODAY Sports
By Stephan Roget
24 days ago
Comments
Acquired, in part, for the ninth overall selection in the 2021 NHL Entry Draft, Oliver Ekman-Larsson arrived in Vancouver with a significant set of expectations — and, given his prior performance in Phoenix, most of those expectations were more on the negative side than the positive.
In other words, folks were ready and waiting to be disappointed with OEL.
Then, something amazing happened. Against the odds, Ekman-Larsson seemed to resurrect his troubled career for the 2021/22 season, not just providing the Canucks with steady defensive play, but simultaneously pulling up Tyler Myers from his status as franchise scapegoat. Together, the two formed a surprisingly reliable pairing all season long, combining to hold together a patchwork Vancouver blueline long enough to make a late playoff push somewhat possible.
But it’s not 2021/22 anymore. It’s 2022/23, and some of those pessimistic chickens have come home to roost in their pessimistic coop.
Advertisement
Ad
Advertisement
Ad
Oliver Ekman-Larsson is playing about as poorly (overall) as he ever did in Arizona.
Tyler Myers is right back to his old, gaffe-heavy tricks.
And that pairing? The one through which their powers combined to provide 20+ minutes of reasonable shutdown hockey on a nightly basis just one year ago?
It’s toast. Over. Kaput.
The OEL-Myers pairing just isn’t working anymore, and the longer that Bruce Boudreau and his coaching staff continue to put them out there together, the more it’s going to continue to hurt the Canucks on the ice.
Let’s look at the numbers.
All stats courtesy of NaturalStatTrick.com
Like last season, the OEL/Myers pairing is the one that has been together for the most minutes thus far in 2022/23. Also like last season, they’ve played a lot of those minutes against top-six competition — though those assignments have begun to be peeled off and handed to the Quinn Hughes/Luke Schenn pairing as the season has progressed, and with good reason.
Advertisement
Ad
Advertisement
Ad
None of OEL/Myers’ fancy stats are in the black. They’ve got an incredibly low possession rate, let through more scoring chances than they prevent, and they haven’t been providing much in the way of offence, either. Combined, OEL and Myers have just one goal and nine assists through 27 cumulative games.
Now, some might look at OEL/Myers’ actual EV goal differential, which currently sits at +3. They’ve been on the ice for eight even-strength goals for and only five against. That’s good, right?
Well, it’s not bad, but it’s also not nearly as good as it looks at first blush. Ekman-Larsson and Myers have been enjoying a much higher team shooting percentage (10.81%) and team save percentage (94.68%) while on the ice together than the Canucks get under other circumstances. That means that at least part of their success is luck-based so far, and should start to even out as the year progresses.
Advertisement
Ad
Advertisement
Ad
Based on those underlying stats, that evening-out process will not be kind to the OEL/Myers pairing’s bottom line.
And that’s only at even strength. Shorthanded, the two have been even worse, and have combined to be on the ice for 11 of the Canucks’ 20 power play goals against.
As is almost always the case for Vancouver defenders, the eye-test is even more ruthless than any statistical analysis could ever be.
Last season, Ekman-Larsson did miraculous work in minimizing and covering for Myers’ trademark, often comedic gaffes and brainfarts.
In 2022/23, however, OEL has been the Abbott to Myers’ Costello.
The great Lachlan Irvine has been cutting clips of the pairing in action, and the endlessly looping gaffe-GIFs have not been pretty.

The OEL-Myers pairing is off to a start. #Canucks pic.twitter.com/ilKkGcc9Lo

A few things:
1) Great save by Martin.
2) One of OEL or Myers HAS to be healthy scratched if they're gonna keep single-handedly creating grade-A scoring chances like this.
3) Garland buddy you gotta at least hit the net there.#Canucks pic.twitter.com/f6rU9xU13y

By the numbers, by the results, and by the highlights, it’s just not working.
Perhaps even more troubling than the lack of success being found by the Canucks’ most frequent defence pairing is what happens when they are split apart.
All stats courtesy of NaturalStatTrick.com
The contrast couldn’t be clearer.
Without Myers, OEL still looks like a passable defensive presence on the Canucks’ blueline. Just by swapping Myers out for the likes of Ethan Bear or Kyle Burroughs or Tucker Poolman, all of Ekman-Larsson’s analytics jump right back through the roof. All of a sudden, he’s in the black again, suppressing chances and controlling play against better-than-average competition.
Advertisement
Ad
Advertisement
Ad
Take Ekman-Larsson away from Myers, however, and we hit the absolute bottom of the performance barrel. Without OEL, Myers is letting through double the scoring chances than the number his team is generating, and a preposterous number of them are high-danger chances.
Sure, both OEL and Myers have let in more actual goals apart than they have together, but the numbers say that won’t last.
So, what does it all mean?
Not much that we didn’t already know before.
Everyone watching last year could tell that Ekman-Larsson had dramatically elevated the game of Myers. The difference was night and day. Myers didn’t suddenly get any better, he just found a partner capable of supporting him and papering over the many, many holes in his game.
As of 2022/23, however, Ekman-Larsson has taken a step back in his own performance. On his own, the regression is minimal, if still noticeable. But the lower quality of play has made a major difference in Ekman-Larsson’s ability to support Myers.
Advertisement
Ad
Advertisement
Ad
The statistical evidence states that Ekman-Larsson is still doing some fine work for the Canucks in other circumstances. He just can’t do this particular job anymore, and it’s not fair to keep asking him to try — not when there are several other defenders available who are capable of making a non-disastrous pairing with him. Instead of OEL lifting Myers up, Myers is dragging OEL down. A change is needed.
Where does that leave Myers? It’s hard to say. Myers hasn’t found success with anyone thus far in 2022/23 and — as the WOWY stats show — is still better off with OEL than without. It’s quite a conundrum for the Canucks’ coaching staff, but it’s one that will have to be sorted out in one way or another, and sooner rather than later.
Advertisement
Ad
Advertisement
Ad
The old plan just isn’t working anymore, and it’s time to move on.