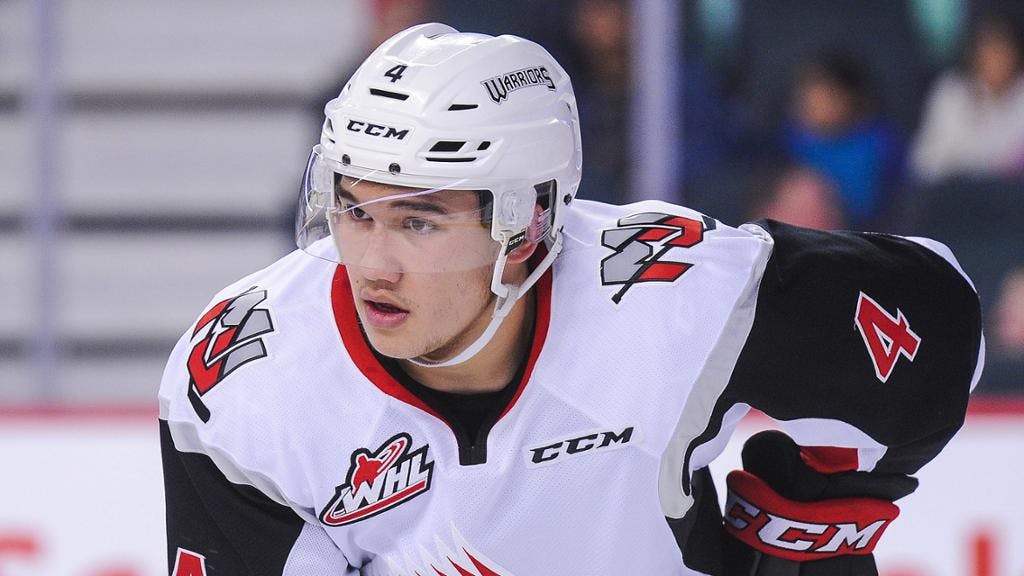 By Stephan Roget
3 years ago
Jett Woo was probably destined to be a fan favourite the moment the Canucks drafted him at 37th overall in the 2018 NHL Entry Draft. Named after actor Jet Li—and possessing the sort of onomatopoeic family name that will play well in Vancouver—Woo represented a unique addition to the prospect cupboard.
What he’s done since then, however, has proven that he’s a lot more than just a cool name and that’s why he comes in at #6 on our annual preseason rankings.
Woo exploded in his Draft+1 season—his third full campaign with the Moose Jaw Warriors—more than doubling his production from the previous year. Moreover, those traits that led GM Jim Benning to select Woo early in the second round—smooth skating, effective positioning, and a punishing physical game—only grew stronger during what proved to be an excellent 2018/19.
Advertisement
Ad
Advertisement
Ad
Adding some impressive context to Woo’s post-draft success is his age—he was just 17 when the Canucks drafted him and will remain a teenager for the entirety of the 2019/20 season. That’s a testament to how much upward potential Woo still has a prospect—but it’s also a bit of a burden, as it’s the reason he can’t be assigned to the AHL’s Utica Comets at the conclusion of training camp.

In keeping with past lists, we’re considering a prospect to be any player who is 25 years of age or younger and who has played less than 25 regular season games at the NHL level. This is a slightly modified and simplified version of the qualifications for the Calder Trophy.
Advertisement
Ad
Advertisement
Ad
As of the 2018/19 season, both Elias Pettersson and Adam Gaudette have graduated from prospect status.

Jett Woo was far enough down the path to success to justify a second-round selection in the 2018 NHL Entry Draft—but what he did in 2018/19 changed the way he was viewed as a prospect. Once touted as a safe, shutdown type with limited upside, Woo is now considered to be a good bet to play a top-four role in the big leagues—and the numbers certainly back up that notion.
Heading into his third full WHL campaign—and fresh off his first training camp with the Vancouver Canucks—Woo suddenly developed a serious offensive bent to his game, ultimately finishing the season with 66 points in 62 games. Woo’s skillful renaissance was most apparent in his expanded vision and increased playmaking abilities, which saw his assists jump to 54 from a previous career high of 17.
Advertisement
Ad
Advertisement
Ad
He scored goals, conversely, at roughly the same rate as his draft year.
That Woo improved in his Draft+1 season shouldn’t come entirely as a surprise, as his 2017/18 was shortened by injuries that continued to affect him even when he did make it into the lineup. Still, even Woo’s biggest supporters probably wouldn’t have predicted that he would become one of the WHL’s highest-scoring defensemen—all the while continuing to develop his game on the defensive end of the ice.
Jett Woo’s career isn’t just trending up in the colloquial sense—it’s very much a statistical fact.
Jeremy Davis’ prospect Graduation Probabilities System (or pGPS for short) is a similarity-based program that seeks to analyze players’ statistical outputs across various leagues and age groups, with the ultimate goal of categorizing those players into cohorts alongside previous prospects in order to predict their likelihood of eventual success.
Advertisement
Ad
Advertisement
Ad
Davis’ system has grown since its inception, and now encompasses up to nine statistical inputs—including a player’s size, era-adjusted projection, and point share—to spit out percentage-based odds on an individual’s likelihood of success, and their likely degree of success, at the NHL level.
Woo’s Year-to-Year pGPS Chart clearly shows that Woo has steadily increased his chances of success at the NHL level through each of his seasons with the Warriors. Upon being drafted, Woo clocked in at 32% odds of success and 23% odds of playing an important role on an NHL blue line—but after 2018/19 those numbers have shot up to 52% and 49% respectively.
Advertisement
Ad
Advertisement
Ad
That’s the kind of progression that would be notable from a high first-rounder—and it’s downright astonishing from someone selected in the second round.
Woo’s brilliant 2018/10 campaign nearly won him a spot on Canada’s entry to the 2019 World Junior Championships, and it certainly accelerated the Canucks’ plans to add him to their blue line. His age means he’ll get another crack at Team Canada in 2019/20, but it also means he’ll probably have to start the season back in the WHL—where he’s been traded to the Calgary Hitmen.
It’s a league that Woo has become pretty familiar with over the years.
Advertisement
Ad
Advertisement
Ad

After a 12-game audition with the Moose Jaw Warriors as a 15-year-old in 2015/16—one that including five playoff games but just two assists—Jett Woo returned in 2016/17 to begin his WHL career in earnest.
Woo’s rookie season saw him establish himself as a hard-hitting, defensively sound player from the get-go—but he displayed limited offensive upside with just five goals and 22 points in 65 regular season games. His scoring pace picked up a bit for the first round of the 2017 WHL playoffs, in which he notched three assists in seven games.

That season also saw Woo play games for Team Canada at both the under-17 and under-18 levels—his first taste of international action. Woo impressed while wearing the red-and-white, racking up a cumulative six points across 11 games in two tournaments—and ensuring that he’d continue to be in Canada’s plans for the foreseeable future.
Advertisement
Ad
Advertisement
Ad
Woo came out strong in his draft season of 2017/18, posting near-point-per-game numbers for the Warriors until a shoulder injury knocked him out of the lineup for a month. The shoulder—and a handful of other ailments—continued to bother Woo even after he returned, which necessitated a lesser offensive role and safer minutes. The end result was a fairly disappointing total of nine goals and 25 points in 44 games, followed by three points in 14 playoff games—an improvement on the previous year, but not the sort of progress he would have needed to be considered for a first-round selection.

Most importantly, however, Woo began make a regular habit of displaying the attributes that would grab the attention of Jim Benning and the Vancouver Canucks—the same skills that would go on to propel him to a breakout in 2018/19.
Advertisement
Ad
Advertisement
Ad
The most eye-catching component of Woo’s game is obviously his physicality—and he’s been described as a “throwback” defender that can deliver devastating open-ice checks. His ability to hit, however, is just an extension of the skill that is at the core of all Woo’s success—his superb skating.
Whether we’re talking edgework, acceleration, vision in motion, or plain ol’ top speed, Jett Woo excels—and that allows him get to where he needs to be on the ice to surprise an opponent with a stiff shoulder.
Even better, Woo is typically able to keep it clean and thus keep his penalty minutes relatively low—though he occasionally crosses the line, like he did when he earned a two-game suspension for injuring Saskatoon’s Kirby Dach.
Advertisement
Ad
Advertisement
Ad

Here is another video of the hit Moose Jaw's Jett Woo placed on Saskatoon's Kirby Dach on Wednesday. He received a 5 minute major, GM and a 2 game suspension. As you can see when the video slows down, the hit was placed before the puck got there. pic.twitter.com/lh2kuK84bS

Woo is also capable of using his speed to join the play offensively, though he didn’t do so regularly until the 2018/19 season. His shot isn’t anything to write home about, but he uses it efficiently and has a habit of getting it on net. His overall vision—particularly in the offensive zone—took a major step forward in Woo’s Draft+1 campaign, and that’s what has allowed him to put his skills to more productive use.
Advertisement
Ad
Advertisement
Ad

Woo’s increased production puts him in some pretty rarefied company according to Davis’ pGPS Cohort Map, with most of Woo’s comparables having gone on to play top-four roles at the NHL level. It’s important to note, however, that Woo plays a fairly unique game and is thus hard to place in any sort of comparative model—and few of his comparables can boast the same sort of physical game that Woo brings to the table.
Advertisement
Ad
Advertisement
Ad
Of course, the core of Woo’s game remains his defensive game—the trait that led to him being drafted as a potential shutdown specialist in the first place. Woo’s skating ability has allowed him to add an offensive dimension to his game without sacrificing in his own end of the ice—and he plays in a way that both frustrates and wears down the opposition’s best players.
It all came together for Woo in 2018/19, where his 66 points in 62 games were good for fifth among WHL defensemen. Moose Jaw bowed out of the playoffs in a four-game sweep in which they were dominated and Woo picked up a single assist—but even that couldn’t put a damper on what had been a career-accelerating season. At its conclusion, Woo was rewarded with a spot on the league’s Second All-Star Team.
Advertisement
Ad
Advertisement
Ad

Woo’s pGPS Tier Chart shows just how much Woo has elevated his status as a prospect—and, subsequently, his odds of finding top-flight success at the NHL level. Davis’ system and the Canucks’ front office staff are both of the mind that Woo has elite potential—and they’re not the only ones.
Mid-way through the year, Woo’s hot start came close to landing him a spot with Canada’s World Junior squad for the 2019 Championships—especially after he had turned heads during the Canada/Russia Series that summer.
Advertisement
Ad
Advertisement
Ad

Again, there’s upside to Woo still being 19 years old, as he’ll get another chance to make Team Canada in the 2019/20 season—with most pundits having already penciled him onto the roster.
His status as a teenager is also what prevents the Canucks from assigning him to the AHL’s Utica Comets, however—and so it’s either the NHL or back to juniors for Woo in 2019/20. That may not seem ideal for a player who is clearly ready to take the next step, but all it means is that he’ll have to take that step with the WHL’s Calgary Hitmen.
Advertisement
Ad
Advertisement
Ad
The Hitmen’s acquisition of Woo means that they’re shaping up to be a contender, which has to be considered a positive from the Canucks’ perspective. It means that Woo’s 2019/20 season will either end with a lengthy playoff run or an early audition with the Comets—either of which should be good for his ongoing development.
Beyond that, it seems like it will only be a matter of time before Jett Woo is filling a full-time role on the Canucks’ blue line and Vancouver fans are more than ready to start regularly serenading him with his own name.