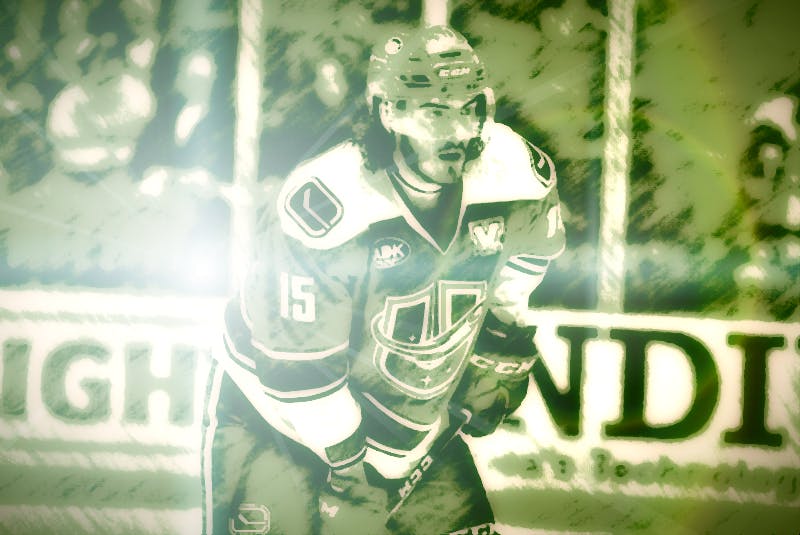 By Cory Hergott
3 years ago
Comments
Standing at 6’4″ and tipping the scales at somewhere around 215lbs, it’s hard to believe that there was a time when Zack MacEwen was told that he was too small to carve out a career as a professional hockey player. Thanks to a growth spurt when he was 17-years-old, TheBigFella, as he has become known, left 5’8″ behind him and took size from a glaring weakness to a significant asset.
It has been a battle for MacEwen as he was not only undrafted by an NHL team, there were no junior teams ready to use a draft pick on him at that stage of his career, either. It is, in part, because of those roadblocks that the big winger was able to beat the odds and sign an entry-level deal with the Vancouver Canucks as a free agent in the summer of 2017. He brings a drive and work ethic that is second to none.
Advertisement
Ad
Advertisement
Ad

In keeping with past lists, we’re considering a prospect to be any player who is 25 years of age or younger and who has played less than 25 regular season games at the NHL level. This is a slightly modified and simplified version of the qualifications for the Calder Trophy.
As of the 2018/19 season, both Elias Pettersson and Adam Gaudette have graduated from prospect status.

Jeremy Davis’ prospect Graduation Probabilities System gives MacEwen an expected likelihood of success of 27.3%, an outstanding mark for a former CHL free agent.
MacEwen is truly a player who beat the odds, going from a one-in-a-hundred shot to be an NHL regular to a one-in-four shot in the span of just a few years.
The vast majority of players in MacEwen’s cohort became fringe NHLers, with most of the successful players going on to carve out careers as bottom-six NHLers. That seems to be in line with what we’d expect based on the eye test. Regardless of where MacEwen ends up, the fact that he’s already played games in the NHL and carved out a career as a solid AHLer should be considered a win for a CHL free agent signing.
Advertisement
Ad
Advertisement
Ad

Zack’s first taste of action in the QMJHL saw him suit up for nine games with the Moncton Wildcats in the 2014/15 season where he picked up a goal and an assist to go along with six penalty minutes. He followed that up with four points in nine playoff games for the club.
In his first full season of action in the “Q” MacEwen got into 66 games with Moncton, scoring 10 goals and adding 30 helpers to give himself 40 points to go along with 56 minutes spent in the box. This time around, MacEwen saw 17 games of playoff action and added another eight points.
TheBigFella was traded to the Gatineau Olympiques for the 2016/17 season and the winger had a breakout year with 31 goals and 43 assists, giving him 74 points in 66 games with the club. In the playoffs that year, Zack piled up nine points in seven games to cap off his junior career.
Advertisement
Ad
Advertisement
Ad
From there, MacEwen fielded offers from 5-6 NHL clubs before settling on Vancouver as his team of choice and beginning his professional hockey career.
MacEwen had a fine first campaign for the Comets, leading their rookie crew with 10 goals and 23 assists to give himself 33 points in 66 games for a half-a-point/game average. He also added one goal in the Comets five-game first-round series with the eventual Calder Cup-winning Toronto Marlies.
Zack saw time as an effective net-front presence on the Comets first-unit power play in his rookie year but didn’t see much if any time on the penalty kill. The winger bounced up and down the lineup, playing anywhere from the first line down to the fourth, but I can’t say that I recall any healthy scratches for TheBigFella. He has seen a plethora of linemates in his time with the Comets but has still been able to bring a consistent effort level/game to the table.
Advertisement
Ad
Advertisement
Ad
MacEwen finished fourth in team scoring behind veterans Reid Boucher, Michael Chaput, and Patrick Wiercioch for his rookie season.
After his first taste of pro hockey, and seeing some early success, MacEwen didn’t rest on his laurels, he got down to work on the areas of his game/conditioning that needed work. In this interview that I did with Zack’s father, Craig at a preseason game last year, I found out that Zack had spent his offseason training with Olympic Gold medalist bobsledder Eli MacEachern to help improve his core strength and his explosiveness in his legs. There was a clear difference in Zack’s skating and conditioning thanks to those efforts.

The Journey To Pro Hockey From The Perspective Of A Parent, With Craig MacEwen https://t.co/AiriQO8Hlb #Canucks #NHL

Advertisement
Ad
Advertisement
Ad
Last season, MacEwen took further steps to make a name for himself with Canucks fans and management alike as he put up 22 goals and 30 helpers to give himself 52 points in Utica, along with 75 minutes in the box. Zack finished third in team scoring behind Reid Boucher and Tanner Kero and tallied eight power play goals to go along with 11 helpers with the man advantage.

It was a tough list to make, but we think we narrowed it down.

MacEwen continued to improve his game and took on more responsibility on the defensive side of the puck as well. The winger was used often on the penalty kill last season and acquitted himself well in that role. I expect to see more of the same this year. As a former centre, MacEwen is able to slide over and take draws which is a handy addition to his already impressive toolbox.
Advertisement
Ad
Advertisement
Ad
TheBigFella isn’t shy about putting pucks on the net as he finished second on the team in shots to Reid Boucher with 176. His hand-eye coordination is fantastic as he has shown the ability to redirect pucks on net while in tight to the goaltender. Zack doesn’t shy away from the dirty areas of the ice, either. He is often found getting his nose dirty in front of the net or the corners battling for pucks.
The Canucks brought in some additional wingers this offseason, making the jump that much more difficult for the young winger, but Zack MacEwen is not a player who should be counted out to make a strong impression at training camp next week. I do not doubt that he has put in the work needed to take his game to the next level after he got his first taste of NHL action late last season.
Advertisement
Ad
Advertisement
Ad
Zack got into four games with the Canucks last year, earning a little under 30 minutes of total ice-time under Travis Green. He saw time up and down the lineup and managed to pick up an assist in his first game. (I happened to be at that game and was sitting with Zack’s father Craig, his mother Julianna, his girlfriend Lindsay, and his uncle Jeff.) This photo was taken right after TheBigFella assisted on Derrick Pouliot’s goal.

Zack also whipped out another one of the tools in his toolbox in his last game with the Canucks before heading back to Utica when he had a pretty spirited tilt with Barclay Goodrow of the San Jose Sharks.
Advertisement
Ad
Advertisement
Ad

#TheBigFella, Zack MacEwen chuckin' them in his first NHL fight. 💪 We'll give him the decision. #Canucks pic.twitter.com/i2vjiMKZaJ

MacEwen brings size, physicality, some silky mitts and a nose for the net to the table, all of which are traits that the parent Canucks could use in their lineup. The skating issues that were a concern early on are no longer an issue, as MacEwen has put in the work to improve an area that was seen as a weakness in the past to the point where it is no longer a concern.

Look at this Six-Foot-Four, 212-pound man move up the ice. #TheBigFella pic.twitter.com/NgIella4zl

This will be a big season for Zack as he is in the final year of his entry-level deal with Vancouver. Although there is a crowd of wingers with the big club, he will be pushing hard for NHL time while rounding out his game in Utica. I expect to see MacEwen take on more responsibility this year for Trent Cull’s Comets, both in terms of offensive production, defensive work, and as a leader with the group.
Advertisement
Ad
Advertisement
Ad
MacEwen has done a great job of putting into practice what the coaching staff has asked of him. He works hard, soaks up coaching like a sponge, and translates that to his on-ice product. If someone were looking for a poster boy for what the Canucks/Comets are trying to do with their prospects, MacEwen would have to be considered a front runner. He has managed to go from an undrafted free agent to someone who is on the tip of management’s tongue when they speak about the good things that are happening in Utica.
Let’s see what he can do this season as an encore.