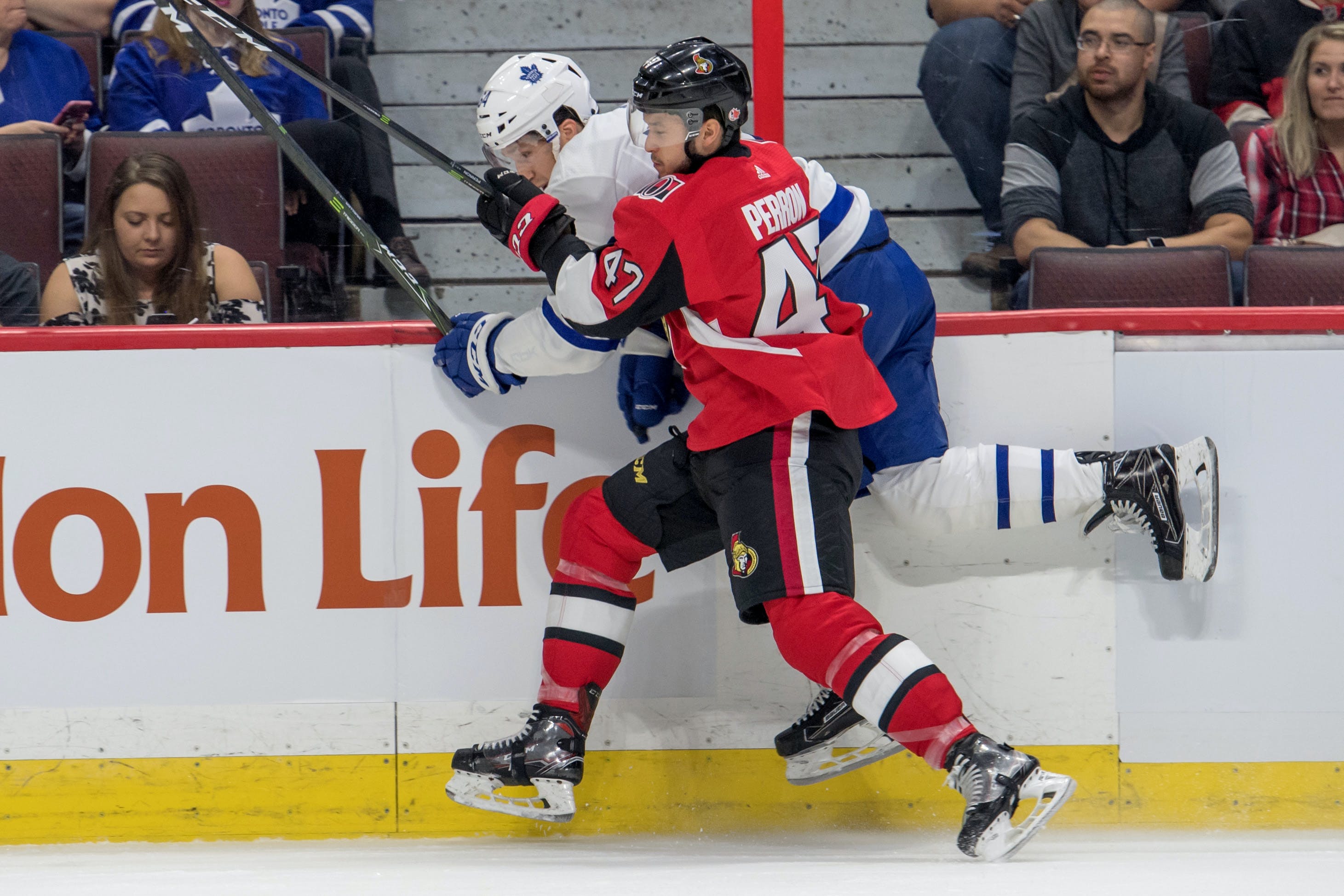 Photo credit: © Marc DesRosiers-USA TODAY Sports
By Jackson McDonald
3 years ago
Comments
It’s that time of year again. Our prospect profile series is back for another year following a brief hiatus during the 2018-19 season.
We’ll be kicking off our rankings with a quick look at some players who didn’t quite make the cut, but still warranted discussion. I thought it would be appropriate to offer the chance for authors who may have had a player ranked while others did not to plead their case for why their player deserved an extra look, so Stephan and Faber will be making cameo appearances later on to help me talk about a trio of players who might make an appearance on next years’ rankings.
Jeremy Davis has been kind enough to offer us access once again to the prospect Graduation Probabilities System (pGPS), and other proprietary data fro NextGenHockey.ca. You can find more information on the ins & outs of the system here.
Advertisement
Ad
Advertisement
Ad
That seems like more than enough preamble, so without further ado, it’s time to play the hits.

Jackson McDonald
Kicking off our list of honourable mentions is 2019 6th round pick Karel Plasek, a winger who spent most of last season with HC Kometa Brno of the Czech Liiga.
Plasek kept his head above water as 19-year-old playing in the Czech Republic’s top men’s league, where he generally had a positive impact on his teammates’ goal-differential, or at the very least, wasn’t a significant liability.
Offensively, Plasek wasn’t a huge producer in the Czech Liiga, possibly due to his youth and limited ice-time. If he’s able to win over his coaches and play a more significant role in the future, I’d expect to see his offensive totals take a jump.
Advertisement
Ad
Advertisement
Ad
Stats courtesy of Jeremy Davis via NextGenHockey.ca
I’ll admit, Plasek isn’t a player I’ve seen a ton of, but based on what little tape I could track down, he’s got good speed, decent vision and hands, and has a willingness to go to the tough areas of the ice despite his 5’11” frame. He’s not the tallest of players by any means, but I wouldn’t call him small, and he appeared willing to engage physical in the instances I was able to watch him play.
Plasek had one 19th-place vote, from myself, and based on his toolkit and the fact he’s played against men for the past two years he is perhaps the biggest sleeper among prospects that went unranked this pre-season. I wouldn’t be surprised if he slowly raises his profile over the next four years and enters the conversation as a legitimate prospect, much like fellow Czech native Lukas Jasek.
Advertisement
Ad
Advertisement
Ad

Stephan Roget
Next up on our list of hounourable mentions is recent acquisition Francis Perron. Perron has undertaken quite the journey to find himself in the Canucks’ prospect cupboard—having been drafted by the Ottawa Senators in the 7th round way back in 2014. After completing four seasons with the Rouyn-Noranda Huskies of the QMJHL—the last of which saw Perron serve as captain, finish second in the league with 108 points, and win QMJHL regular season and playoff MVP—he spent two years with the Senators’ AHL affiliate, though he struggled with both injury and consistency. Perron was made part of a blockbuster trade in the 2018 offseason, accompanying Erik Karlsson to the San Jose Sharks in exchange for Chris Tierney, Dylan DeMelo, Rudolfs Balcers, Josh Norris, and several draft picks.
Advertisement
Ad
Advertisement
Ad
At the time, Perron was buried deep on the Ottawa depth chart and represented little more than a contract swap in the transaction. Perron, however, eschewed his status as a throw-in and experienced a breakout season of sorts with the San Jose Barracuda in 2019/20. The left winger racked up 47 points in 63 games—good for second in Barracuda scoring—and may have reignited his chances at an NHL future in the process. When the San Jose organization indicated that they may not qualify Perron’s contract, Vancouver GM Jim Benning swept in on draft day to acquire Perron for the expiring Tom Pyatt and a 6th round pick, adding a 2019 7th rounder in addition to the 23-year-old forward.
Scouting-wise, Perron is praised for his playmaking talents—though he previously struggled to bring those skills to the table consistently with the decreased time and space available at the professional level. He has also been criticized in the past for being a “perimeter player,” though that seems to have changed with an increase in confidence and opportunity. Now, he seems to have established himself as a top-line scorer in the AHL at the very least—and may just be in line for a callup or two when injuries strike the Canucks’ forward corps—and that’s more than can be said for the average 190th overall draft pick.
Advertisement
Ad
Advertisement
Ad
Francis Perron carries an expected likelihood of success of 24.5% via the prospect Graduation Probablities System, and an expected production rate of 30.9 point per 82 games, indicating that he may have deserved a second look from our contributors during the process of compiling our rankings.
Stats courtesy of Jeremy Davis, via NextGenHockey.ca
Despite not cracking our top 20 this year, Perron is one of the most likely players to earn an extended look with the Canucks this season among prospects profiled this year. While Perron is edging closer and closer to “he is what he is” territory, there’s enough in his profile to suggest he could develop into a bottom-six player for the Canucks within the next couple of seasons.

Faber
The Vancouver Canucks generally look for strongly defined player archetypes in the later parts of the NHL draft. In the case of the 195th overall selection at the 2019 draft, they took a flyer on a power forward type that would likely take some time to develop in NCAA hockey but could yield some NHL potential a few years down the road.
Advertisement
Ad
Advertisement
Ad
At 6 foot 3 inches and just under 200 pounds, Aidan McDonough is a powerful winger who showed a decent scoring touch last season in the USHL for the Cedar Rapids RoughRiders. Aidan was able to pot 21 goals and a matching 21 assists in 50 games. His game took a step forward in the playoffs not only on the scoresheet, but in terms of performing in high-pressure situations as well.

McDonough is attending Northeastern University this season and will be playing with fellow Canucks prospect and former development camp roommate Tyler Madden. A former two-sport athlete who was given the gift of a late growth spurt that saw him grow about six inches over four years of high school now has found himself more comfortable with his bigger frame and plans on using it to round out his game as a power winger. He plans on using that new size to his advantage, an attribute he honed during his time in Cedar Rapids:
Advertisement
Ad
Advertisement
Ad

“We took pride in playing physical, that was one of the things that coach Carlson preached. It is a really tough league, everyone is a real good player, it’s a really physical and defensive league. We wanted to make sure that if you mess with one of us you mess with all of us. We weren’t afraid to throw the body around or drop the gloves if need be.
I had a couple scuffles here and there… I don’t really go looking for anything in terms of fighting, physicality is a part of my game so I like to use my body as an advantage and finish checks and separate guys from the puck. I wasn’t really looking (to fight) but it came across me a few times and I had to defend myself. I only had one official fight but I try to stay out of the box as much as I can.”

Not a ton of 7th round picks make it to the NHL but after McDonough got a taste of what it’s like to be a pro at development camp, he was more committed than ever to step his training up a level and do everything in his power to carve out a career in pro hockey.
Advertisement
Ad
Advertisement
Ad

“You realize that, wow I have so much work to do and I think it kind of excited me to get back to my training. I’m obviously so far away but if I have a good year or two you never know. You got a taste of that life, being treated like an NHL player, after that it’s like ok, jeez, I want to do this for the rest of my life so I’m going to go home and do what I have to do to be able to live like that.”

The drive is there for McDonough, but where he really dominates in in in tight around the net. He has one of the quickest sticks in 50-50 battles in the USHL, but only time will tell if those abilities will translate to the NCAA.
Advertisement
Ad
Advertisement
Ad
Stats from Eliteprospects.com
pGPS doesn’t paint the most flattering picture of McDonough, who carries an expected likelihood of success of just 4.3%, but based on the Canucks’ prior success drafting out of the USHL, it seems unwise to count him out just yet.
McDonough made the top 20 in a couple of CanucksArmy writer’s lists, including mine, but for now he is still far from being considered a top-tier prospect, and he’s well aware of that. With a couple of years at Northeastern to develop, McDonough has a chance to raise his profile, but for now, he remains just intriguing enough to qualify as our final honourable mention.