Advertisement
Ad
Offseason training and social media advocacy: Ethan Keppen’s growth on and off the ice 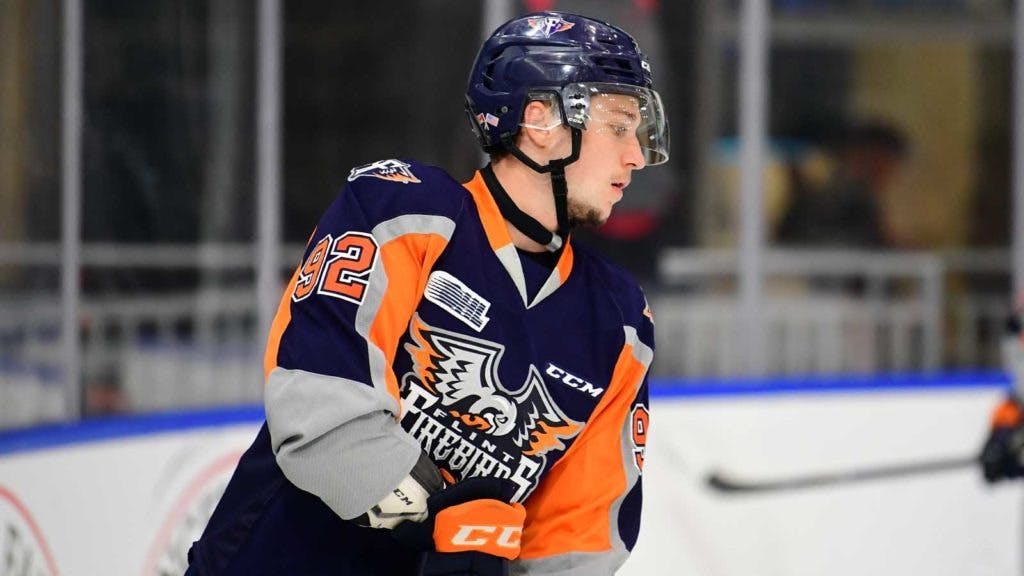 Photo credit: Dan Hickling/ Hickling Images
By Cody Severtson
1 year ago
Comments
On a gorgeous Thanksgiving Sunday, I made the trek down Highway-1 to catch one of the final days of the Abbotsford Canucks’ training camp.
I happened to be the only person in the building not employed by the Abbotsford Centre or the Vancouver Canucks organization.
It was odd.

Thankfully, being the only person in the rink allowed me to speak with the Canucks fourth-round draft pick from 2019, Ethan Keppen.
The 1-on-1 covered everything from Keppen’s seven-game stint with Utica last season to his offseason improvements and social media advocacy.
Taking place after a gruelling practice that upped its intensity the further it went on, I opened up with some fairly generic ‘hockey man’ questions about Keppen’s time at both NHL and AHL training camps.
Advertisement
Ad
Advertisement
Ad
“I’m feeling great,” said Keppen. “Camp’s going well. We had a few practices last week to start out camp and today we had more bodies, had four full lines, and I was practicing with [Will] Lockwood and [Carson] Focht. We were doing well out there and it seemed like the boys were very energetic and excited for this upcoming season — going to California this weekend, so we’re very excited.”

FYI, lines at today’s practice, in no particular order:

With a full complement of players available to Trent Cull, it’s hard not to read into this trio’s look. Quintessential power-forward in Keppen on the left side, a gritty speedy two-way centerman with a great wrist-shot in Carson Focht, and a tenacious wrecking ball of a right-winger in Will Lockwood.
Advertisement
Ad
Advertisement
Ad
“I feel like we gel together pretty good and got some good chemistry going out there,” added Keppen. “We’re pretty similar in ages — I’m just a year younger than both of them and we were together a little bit in Utica last year.”
Last year…
Keppen missed a chunk of his season with the Flint Firebirds due to a wrist injury, with his final OHL game occurring on February 2nd, 2020.
Fifteen months later (439 days to be exact), Keppen made his AHL debut against a powerhouse Providence Bruins team, where it went about as bad as it could get for the rookie forward.

Ethan Keppen’s AHL debut in Game 14 @ Providence Bruins
He knew the question was coming, yet Keppen was refreshingly honest and forthright about his AHL struggles when asked how he felt about his debut.
“It was a brutal wait,” said Keppen with a chuckle. “But first things first, I felt like I wasn’t in my best shape going into the season with Utica. I felt like I was a little heavy just from COVID and everything from sitting around at home.”
Advertisement
Ad
Advertisement
Ad
At this point in the interview, I definitely straightened my posture and sucked in a bit as if I hadn’t been downing Jalapeno Doritos and a twelve-pack of White Claws every weekend for the past 18 months.
“I tried my best to stay in shape at home. There was no ice or anything,” noted Keppen. “Rinks were all closed back in Ontario. But, like I thought I did my best out there, I felt okay. But not 100%. I was probably at 70% of my groove. As the games went on, towards my last game, I felt like I was getting back to it. But it was too short [of a timespan].”
When asked about his biggest takeaways from the seven-game stint, Keppen explained his areas of improvement and his offseason growth (er, slimdown) plans in great detail!
Advertisement
Ad
Advertisement
Ad
“I know I’m a big guy and I felt I was a bit overweight, I needed to get quicker, my shot needed to improve, and my puck-handling down low. This summer I dropped 10-15 pounds, I’m sitting just above 200 right now, before I was 215-220. It was a big summer with a big diet and everything. I switched gyms and trained in Toronto with Dan Noble [to work on] nutrition, explosiveness, speed, and quick feet which helped me a lot.”
“I feel a lot different this year going into my first year as a pro. The feedback from the Canucks, after Utica, was to get quicker and to be better down low; I have to create a lot of space for my linemates, playing up and down, playing a 200-foot game so I had to [focus on that]”
Advertisement
Ad
Advertisement
Ad
Aside from his on-ice growth over the summer, I was especially interested in Keppen’s off-ice growth.
Specifically, an Instagram post that he had shared in September of his and his girlfriends’ visit to the Vancouver Art Gallery’s vigil for Every Child Matters.

In hockey circles, we don’t usually see players going out of their way to create and share wholly unique social media posts of advocacy/support.
Typically, a team will share an advocacy/support post, and players will re-share that to their feed. It’s still a valid and meaningful way of contributing support and letting your followers know you care.
Bo Horvat had a fantastic answer in his 1-on-1 with Thomas Drance of The Athletic with regards to using his following to affect positive change.
Advertisement
Ad
Advertisement
Ad
“With my profile and somewhat following — I don’t think I have a ton of followers or whatever — but it’s important to share and let people know my opinion,” said the Canucks captain. “To have a voice, not just for myself but for people. Obviously everyone is going to have their own opinions, but for me, I feel like with my platform and who I am, I want to be honest and help make change around the community.”
“If I can use my platform to do so, I will.”
Naturally, I had to ask Keppen where his decision to share a unique support post came from.
Writer’s note: when asking Keppen about elaborating on his social media post regarding a very sensitive subject, I offered him the ability not to answer if he felt uncomfortable answering.
Advertisement
Ad
Advertisement
Ad
Keppen didn’t hold back.
“My girlfriend takes this very seriously and I’m [always] there for her. She’s studying Child Studies in University and cares about children and so do I,” said Keppen.
“Just seeing the art gallery, I had to take a picture [and share my support], I feel awful for those kids back in the day. I’m actually reading a book right now called Indian Horse, learning about residential schools and all that. [The 215 empty shoes] was something I’d never seen before and I had to take a picture and share with my family back home and show the world that I do care.”
“My mom is a nurse practitioner back in Toronto at SickKids: The Hospital for Sick Children. My whole family is just all about caring for kids. So, I always want to give back to my community and just show my support.”
Advertisement
Ad
Advertisement
Ad
The Vancouver Canucks have done a tremendous job advocating for real truth & reconciliation since the Tk’emlúps Te Secwépemc discovery of 215 buried Indigenous children at the former Kamloops Residential School.
The Canucks began their 2021-22 pre-season with a moment of silence for the lost and forgotten children. They also incorporated the Coast Salish anthem into their pre-game ceremonies. They invited Chief Wayne Sparrow of the Musqueam Band to speak with players on the impacts of residential schools on Indigenous culture before practice.
Ethan Keppen might not have the biggest following, but his small Instagram post of support touched this writer and hopefully touched others as well.
Signed to an AHL contract this past summer, Keppen has put in a ton of work for on-ice growth as a player.
But it’s also great to see that off-ice work ethic contributing to his growth as a person.
Advertisement
Ad
Advertisement
Ad