Advertisement
Ad
The mysterious Danila Klimovich will answer a lot of questions with his QMJHL play this coming season: CanucksArmy Prospect Rankings #4 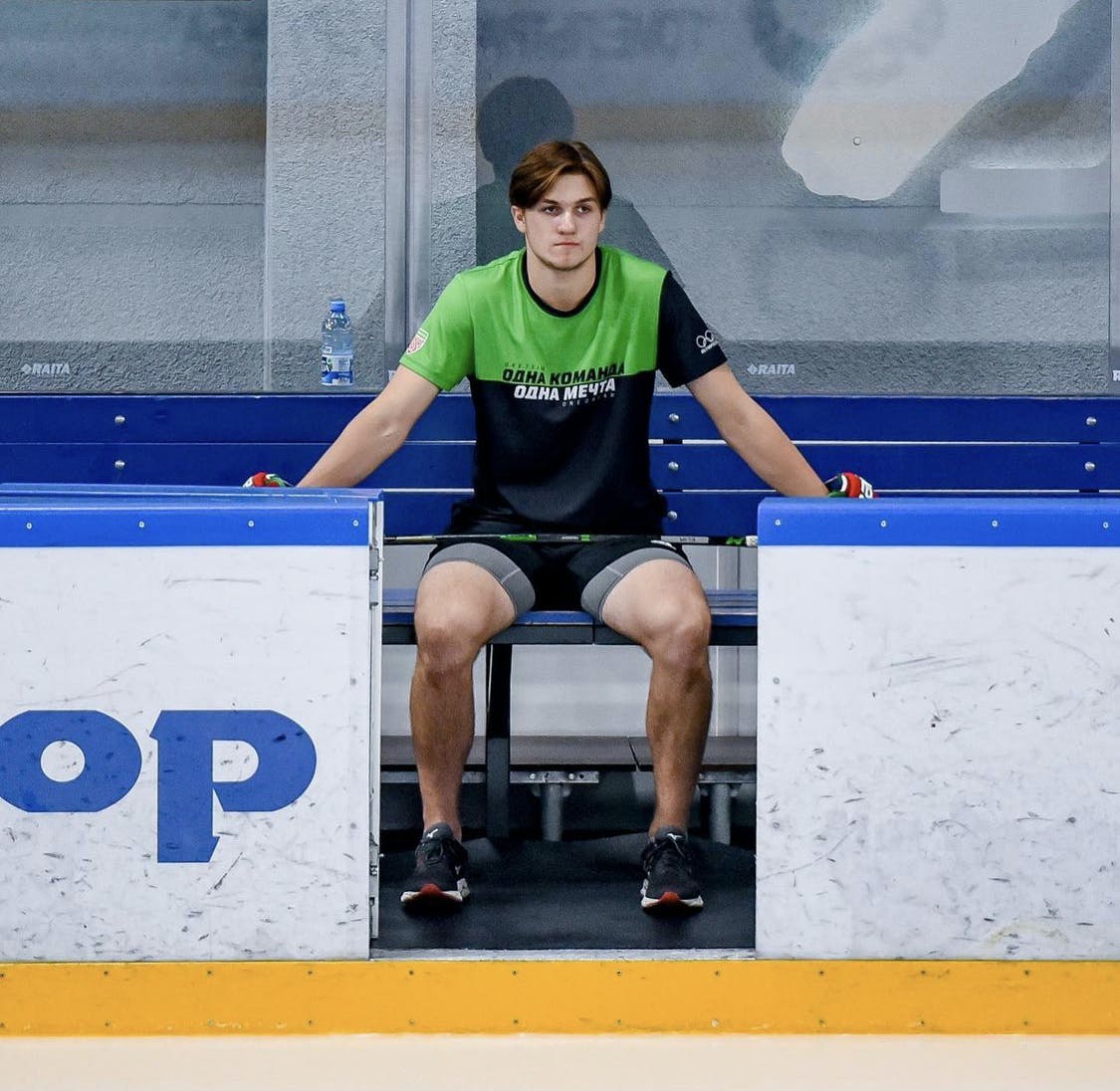 Photo credit: Instagram via @klim_18_
By Faber
1 year ago
Comments
Many in the hockey world were surprised when the Canucks traded away their 2021 first-round pick. Many also knew that Jim Benning was the general manager and were not shocked at all. Say what you want about Benning — he isn’t afraid to take big swings.
That’s exactly what he did with the next prospect on our rankings. When the Canucks traded away the ninth overall pick, there was instantly more pressure to hit on their second-round pick. Benning and his scouting staff are hoping that he can turn that pressure into a diamond with their home run swing on a Belarusian sniper.
Let’s get into number four on our rankings, the mystery man, Danila Klimovich.
Height: 6’1”
Weight: 203 lbs
Age: 18
Position: RW
Handedness: R
2021-22 Team: (Probably) Rouyn-Noranda Huskies (QMJHL). (Unlikely) Abbotsford Canucks (AHL)
Advertisement
Ad
Advertisement
Ad
Let’s address his 2021-22 team off the hop.
Klimovich’s agent tells CanucksArmy that “Danny is 100% coming to [Canucks training] camp” and that “he is coming to win a job with the Canucks.”
Rick Dhaliwal of Donnie and Dhali confirmed that Klimovich will be on his way to Vancouver the week before training camp. It’s going to be great to see how the kid can stack up against NHL competition and he’s got a shot to impress the coaches with his dashes of offence that he has shown throughout summer hockey in KHL exhibition games with Dinamo Minsk.
Though he has impressed and the AHL could be a landing spot, all signs are pointing towards Klimovich heading to the QMJHL to play with the Rouyn-Noranda Huskies. Klimovich was selected with the 29th pick in the 2020 CHL import draft.
Advertisement
Ad
Advertisement
Ad
An interesting tidbit about Klimovich is that at the time of the import draft, he was listed at 5’11”, 163 lbs. That means that in one year, he put on 40 pounds and grew two inches in height. That sounds like my growth spurt in grade six:
Actually, maybe I grew more than two inches in height that year…
Jim Benning told Harman Dayal of The Athletic that Klimovich will likely be in the QMJHL this season. He has two more years of CHL eligibility but can opt-out to turn pro after the 2021-22 season.

Advertisement
Ad
Advertisement
Ad
With the skillset that Klimovich possesses, he should be one of the most exciting players in the QMJHL and will add a major boost to the Huskies this fall. Making the jump from the Belarusian second division to the CHL is great for his development as he will have steady practices with some of the best developmental coaches in North America.
That last sentence is very important as well — the fact that he will be playing in North America is great for the Canucks organization. They can now keep a close eye on how he is adjusting and prospering through very important years of a hockey player’s career. I’d hope that the Canucks have someone out east who will be a close contact with Klimovich and make sure that the adjustment goes as smooth as possible.
Advertisement
Ad
Advertisement
Ad
His strengths are clear from the game tape. Klimovich loves to shoot the puck on the power play and at even strength, he loves to play between the circles and hunts for open nets in tight where he shows no hesitation to fire the puck.
Another part of his game that has consistently shown up is his intelligence in breakouts. He makes himself available for passes and has strong spatial awareness about where he can find open ice in the neutral zone.
It’s a different hockey world in the Belarusian second division and more structure and better coaching in the QMJHL will help Klimovich iron out some of the knocks on his game. Klimovich has a bit of a temper when he loses the puck on a rush and will deliver a slash almost every time a defender takes the puck from him. Those slashes are going to be called early and often in the QMJHL and his coaches will surely have a talk with him about harnessing his anger.
Advertisement
Ad
Advertisement
Ad
He’s a strong kid and uses his body enough but once he gets into a league where he is playing against kids his age, I’d expect his physicality to show even more on tape. If Klimovich is to hit his ceiling as a prospect, he could end up being a pesky middle-six right winger who can get power play minutes and bring offence at five-on-five.
There is also a good chance that Klimovich doesn’t live up to expectations.
If you were to take away his performance at the U18s tournament at the beginning of May, Klimovich was likely to be a 4th-7th round pick. Benning was down in Frisco, Texas for the tournament and saw Klimovich put on a show in a few games including a hat trick that had all the scouts buzzing about him.
Advertisement
Ad
Advertisement
Ad
I look at his performance at the U18s in two ways. First off, it was just one 10-day stretch where he showed that he should be in the conversation to be a top 60 draft pick in the 2021 draft. You can’t do all your scouting from one tournament, but my second point is that this was the biggest stage that Klimovich had played on in his whole hockey career and he showed very well.

A nice little rush and follow-up shot on net against Canada at the U18s from Danila Klimovich.

We will see Klimovich at Canucks training camp in two weeks. pic.twitter.com/PlSg2TFMA0

We decided to go with Klimovich at number four on our rankings because of the offensive potential and the mystery behind his game. A full season in the QMJHL will be great for him and for us as per coverage. Klimovich has a long way to go when it comes to being comfortable with the English language and he will now be thrown into a French-speaking province. According to the most recent census, 96% of Rouyn-Noranda’s population are primarily French-speaking residents.
Advertisement
Ad
Advertisement
Ad
Depending on how he performs and develops through the 2021-22 season, Klimovich may end up being number one on our rankings or could even fall down a few spots next year if he struggles in the QMJHL. With Jack Rathbone and Vasily Podkolzin likely graduating off of our prospect rankings, there is a lot of pressure on Benning and his scouting staff that they did their homework on Klimovich instead of just being impressed at one tournament that he and John Weisbrod were in the building for.
It’s hard to form an opinion on the kid with how much of a limited viewing we have been able to see on him. Believe it or not, the tape from the Belarusian second division is pretty hard to track down.
We will keep a close eye on Klimovich in the QMJHL this coming season and hope to see him succeed in the way that the Canucks’ scouting staff believes he can.
Advertisement
Ad
Advertisement
Ad
I’m leaning towards the side that he will rip that league up. Some of the KHL exhibition tape that I watched this summer showed me a powerful skater who needs to work on his form but is physically gifted with good size and loves to shoot the puck. I believe he will do well in the CHL and will be at the end of many Huskies highlights. I’ll definitely be writing about him a lot over the next six months.
Keep an eye out for my Klim in the Q series all throughout the 2021-22 season!
Previous Rankings Articles:
15. Lucas Forsell, W
14. Arturs Silovs, G
13. Viktor Persson, RD
12. Arvid Costmar, C/RW
11. Hugo Gabrielson, LD/RD
10. Dmitri Zlodeyev, C
9. Joni Jurmo, LD
8. Jonah Gadjovich, LW
7. Jett Woo, RD
6. Aidan McDonough, LW
5. Will Lockwood
Advertisement
Ad
Advertisement
Ad