The Thatcher Demko contract keeps getting better, and will go down as the best Jim Benning ever signed 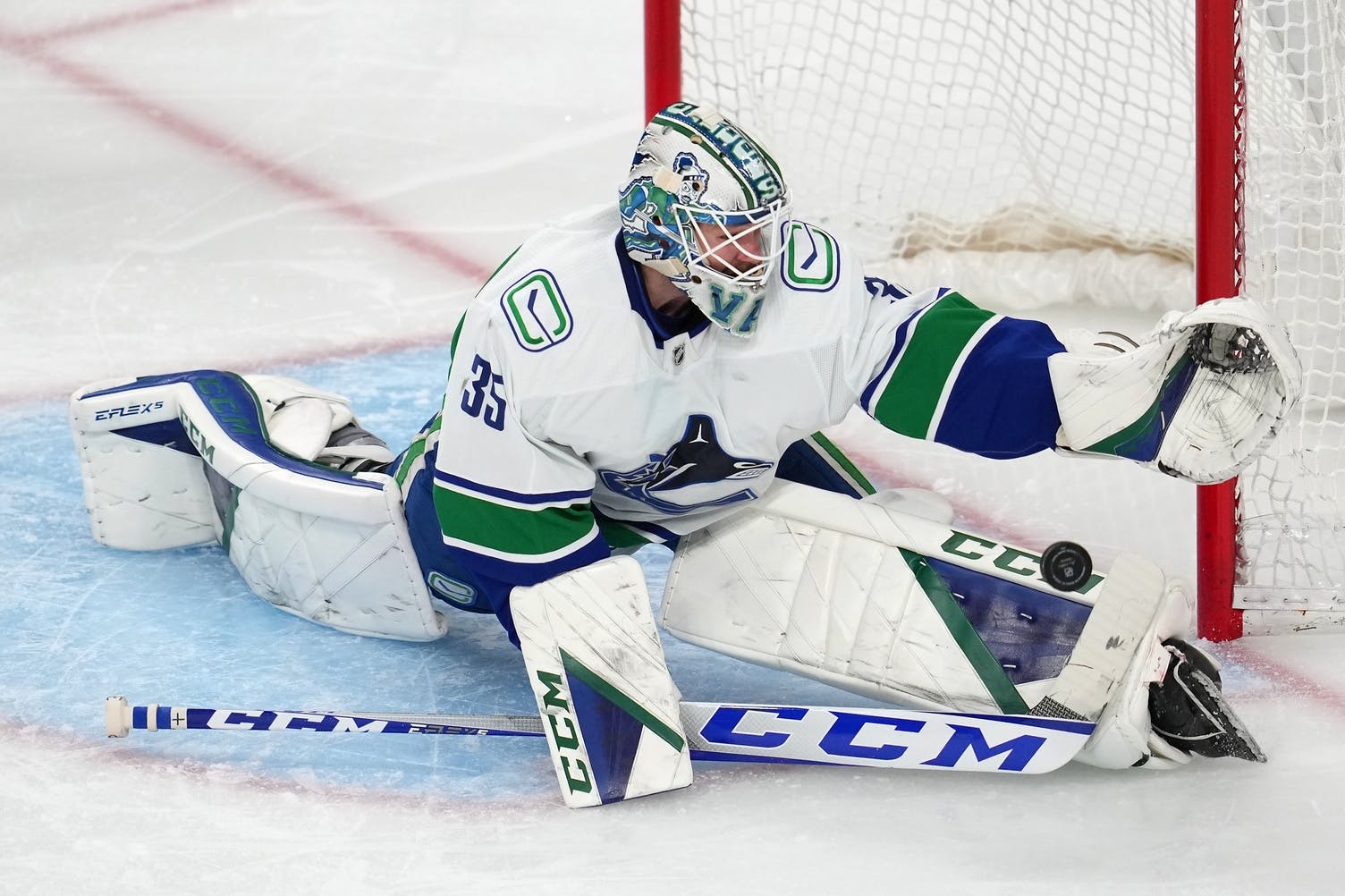 By Stephan Roget
5 months ago
Heading into the 2022/23 season, Thatcher Demko is still signed with the Vancouver Canucks for an additional four seasons at an average cap hit of just $5 million, having completed one year of his current five-year contract.
Since Demko signed that deal, eight other NHL goaltenders have signed contracts at the same cap hit or higher (with another potentially added to the list whenever Jake Oettinger signs an extension with the Dallas Stars).
That means that, as of this writing, Demko sits in a tie as the 14th -highest paid goalie in the league with six other players. In other words, he’s both the 14th highest paid goalie AND the 20th highest paid goalie.
But most would agree that, in terms of actual ability, Demko ranks much, much higher.
Last season, Demko was one of nine goalies to pick up Vezina Trophy votes, finishing in a tie for seventh place with a single third-place vote.
The other goalies receiving votes? Igor Shesterkin, Jacob Markstrom, Juuse Saros, Frederik Andersen, Andrei Vasilevskiy, Ilya Sorokin, Ville Husso, and Tristan Jarry.
Drop those last two off the list, perhaps, and this feels like appropriate company for Demko’s current ability level.
In fact, Markstrom makes a great basis for comparison. Vancouver fans got to watch Markstrom tend goal for parts of six seasons. Demko is now entering his sixth partial season with the Canucks. Did anyone see anything in Markstrom that they haven’t already seen in Demko? Is anyone still doubting that Demko is, at the very least, an equally-talented goaltender?
It’s important to remember that Demko accomplished everything he did in 2021/22 while playing behind a patchwork defence and an oft-injured lineup. Did he wear down a little bit by season’s end? Sure. But even when the wheels fell off for the Canucks as a whole, Demko’s faltering was minimal, at best. His GAA and Save % may have suffered by the end of it all, but his underlying numbers remained inconsistent.
Just take a look at this fancy statline from MoneyPuck, which shows that, although Demko may have ultimately let in more goals, it was largely as a result of the quality of play in front of him. In terms of Goals Above Expected and Save % on unblocked shots, Demko and Markstrom were in lockstep all the way through 2021/22.

From MoneyPuck
And again, we don’t even need to rely on analytics to make this point. Last year, Demko played behind a blueline consisting of Quinn Hughes, Oliver Ekman-Larsson, Tyler Myers, Luke Schenn, and a handful of other, lesser lights.
Markstrom played behind Chris Tanev, Rasmus Andersson, Noah Hanifin, Oliver Kylington, Nikita Zadorov, and Erik Gudbranson.
Does anything else really need to be said about how much more difficult Demko’s job was than Markstrom’s?
In fact, there’s a very serious argument to be made that much of the praise handed out to the Vancouver blueline in 2021/22 — the team did finish with the seventh-fewest goals-against per game — probably belongs to Demko, whose excellence made everyone on the ice look a little bit better at keeping pucks out of the net.
The best news of all? Demko is just 26 years old, and entering his goaltending prime. So long as he can avoid injury troubles and the breakdown of his joints and ligaments, he should continue performing at this level for at least the length of his current contract, and probably well beyond that point, too.
During that time, assume that more goalies will be signing contracts equal to and above Demko’s $5 million AAV. Also assume that a lot of those goalies won’t be anywhere near as good as Demko.
Some of the goalies that signed $5 million+ contracts this past year are Philipp Grubauer, Elvis Merzlikins, Darcy Kuemper, Jack Campbell, Linus Ullmark, Cal Petersen, Shesterkin, and Saros.
Aside from Shesterkin and maybe Saros, is there any other goalie on that list that you’d consider swapping out for Demko? Consider for even a second?
No, we didn’t think so.
By the time Demko enters the final season of this contract in the 2025/26 season, his cap hit will rank somewhere in the high-20s for NHL goaltenders. In the present moment, he makes about as much as the average starting goalie, despite being well above-average. By 2025, he’ll be one of the lowest-paid starting goalies in the entire league.
Conveniently enough, that’s right smack in the middle of when the Canucks hope to reach a more competitive status. Having such a bargain in the crease during that time will be an enormous boon, and allow the roster to be bolstered elsewhere.
Which brings us all back to our initial praise of the contract. Thatcher Demko’s current deal isn’t just one of the best goalie contracts in the NHL right now. It’s also probably the single best contract that former GM Jim Benning ever signed, and it’s one that is going to still be impacting the Canucks in a positive way a half-decade after Benning’s dismissal.