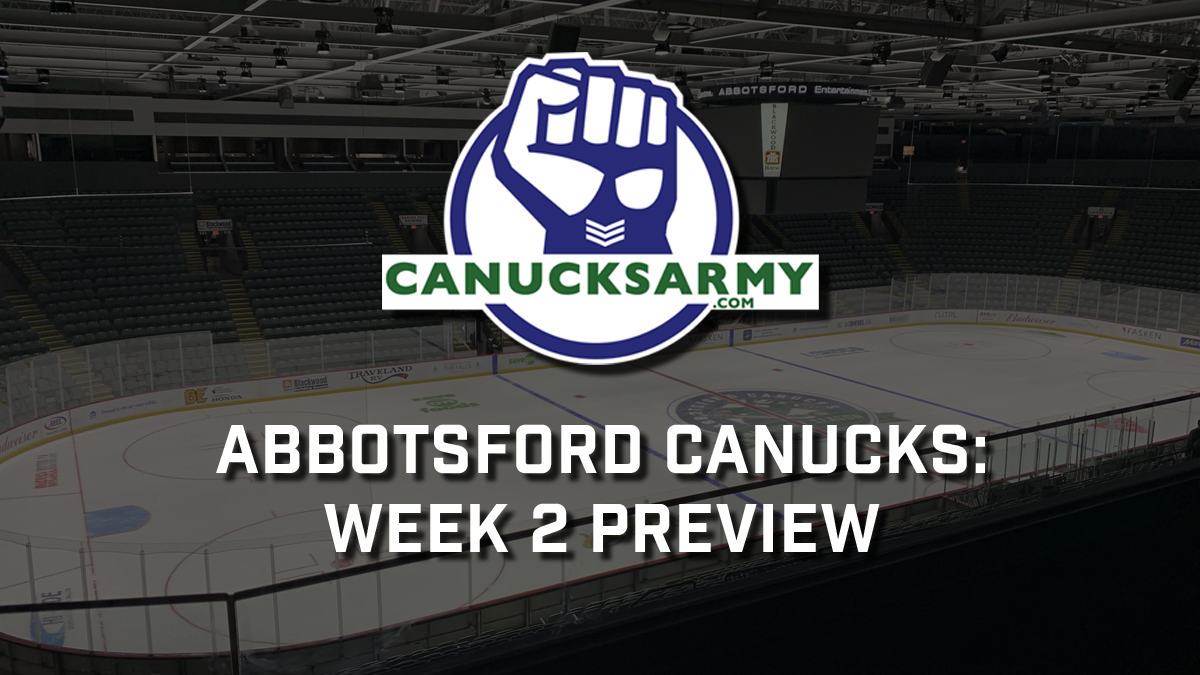 By Cody Severtson
3 months ago
Comments
In a match-up between baby-faced AHL franchises, the Abbotsford Canucks are set to take a weekend road trip down the I5 to battle the Coachella Valley Firebirds.
Because the Acrisure Arena isn’t quite ready for the season, the Farm will first battle the Firebirds Friday at the Kraken’s practice facility, the Kraken Community Iceplex.
On Saturday, they will duel inside the Climate Pledge Arena. The timing is rather unfortunate, as the Farm will only play Coachella Valley four times this season, none at their brand-new facility in Palm Springs. It’s a bit of a bizarre schedule where two brand-new franchises, geographic and divisional rivals, only face each other just twice in each other’s home rinks.
CanucksArmy will have post-game coverage for both games.

After making his debut against the Ontario Reign, Justin Dowling remained absent the next day against the Condors.

GM Patrik Allvin announced today that F Phillip Di Giuseppe has been placed on waivers for the purpose of assignment to Abbotsford (AHL).

With Noah Juulsen and Phil Di Giuseppe assigned to the Farm, Abbotsford looks to have their deepest roster of the season available to them for this two-in-three weekend.
Sheldon Dries was re-assigned to Abbotsford at the same time as Noah Juulsen’s recall to the club for their game against the Washington Capitals.

The Firebirds currently sit in second place in the Pacific Division, sharing matching 2-0-0-0 records with the San Jose Barracuda.

The Canucks and the Firebirds are neck-and-neck on the special teams battle, with the Firebirds narrowly edging them in penalty-killing effectiveness but sharing an identical powerplay success rate.

Leading the Firebirds in scoring is none other than former Canucks prospect Kole Lind. During Coachella Valley’s season debut against the Calgary Wranglers, Lind produced two goals and two assists in a wild 6-5 regulation win.
Advertisement
Ad
Advertisement
Ad
The Valleybirds followed up their debut victory with a second regulation win over the Wranglers by a score of three to one.
Abbotsford struggled to match the speed of the Ontario Reign, leading to a dismal 8-2 loss in their debut. However, despite being considerably out-experienced by the Bakersfield Condors, the Farm put in a valiant, skillful effort en route to a 3-2 overtime victory. While not without errors, the Farm found success through their ability to create offence off of a suffocating forechecking presence. Expect Abbotsford to try and repeat that gameplan by utilizing their tenacious forecheck to exploit the Firebirds’ lack of backend footspeed.
With Di Giuseppe and Dries’ addition to the Farm’s top six, the Canucks’ should be able to match the Firebirds’ (pardon the pun) firepower. With such comparable special teams, this series will likely be a 5v5 war of attrition that relies heavily on goaltending.
Advertisement
Ad
Advertisement
Ad
Despite recording two victories on his ledger, Joey Daccord starts his AHL campaign with a 3.00 goals-against-average, and an .892 save percentage for the Valleybirds.
The Canucks’ goaltending trio has seen a mixed bag so far. Collin Delia’s Abbotsford debut resulted in a 7.80 goals-against-average and a .837 save percentage. Arturs Silovs leads the Farm in wins with a 2.61 goals-against-average, and a .900 save percentage. Depending on the coaching staff’s faith in Delia, Canucks fans could see a season debut for Mikey DiPietro sooner than later.
Or not.
I don’t know.
Hockey’s dumb and weird.