Advertisement
Ad
Canucks’ Truscott gets into a game and creates offensive chances, Jurmo settles in after a tough start: 2022 WJC day one recap 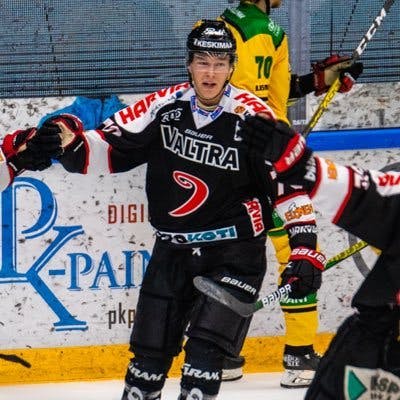 Photo credit: Twitter Via @Jonijurmo
By Faber
3 months ago
Comments
The 2022 World Junior Championships officially began on Tuesday with three games to kick off the tournament.

Czechia controlled a lot of the possession in the first period but was down by two goals after the first period. Servac Petrovsky opened up the scoring just 3:20 into the period. His goal was quickly followed up by Matej Kaslik firing another goal past Czechia goaltender Jan Bednar.
It felt like Czechia was deserving of a goal from their strong control of scoring chances in the early part of the game. Czechia got their first goal 2:22 into the second period with the shot count at 20-6 in their favour. Jakub Kos cut into the lead and brought Czechia within one goal.
2022 sixth overall pick David Jiricek had a shorthanded breakaway with 15 minutes left in the second period but Slovakian goalie Simon Latkoczy was up to the task and maintained Slovakia’s one-goal lead.
Advertisement
Ad
Advertisement
Ad
Latkoczy continued to play well for Slovakia but late in the second period, Czechia was able to tie the game on their 30th shot of the game. Michal Gut was able to get his stick on a loose puck and score the equalizer.
Czechia continued to dominate offensively and had a two-on-two rush that ended with Matyas Sapovaliv giving his team their first lead of the game. We sat with a 3-2 Czechia lead after 40 minutes of play and they were more than deserving of a lead as they were outshooting Slovakia by a 36-14 count.
Jan Mysak scored at the halfway point of the third period to give Czechia a 4-2 lead and it felt like that insurance goal was going to be enough to get through Slovakia.
Slovakia disagreed as they drew a five-on-three power play and scored with 6:04 remaining in the period. The goal from their captain Rayen Petrovicky cut the lead down to 4-3 and just like that, Slovakia was right back in the game. Czechia took another penalty with just 18 seconds remaining in the five-on-four and we were back with another quick two-man advantage for Slovakia.
Advertisement
Ad
Advertisement
Ad
Jiricek came out of the box when the two-man advantage ended and the defenceman had his second shorthanded breakaway of the game. He was unable to score on his second attempt and Slovakia went to work on tying up the game in the final few minutes.
Slovakia struck again with another power play goal that sent the game to a game tied up at four goals a piece. Kaslik scored his second goal of the game and that was exactly what Slovakia needed to make it a 4-4 tie.
Just when it felt like we were going to get our first overtime of the tournament, Czechia quickly struck with Gabriel Szturc streaking down the right wing and cutting to the net, where he went to the forehand and gave Czechia a 5-4 lead.
Advertisement
Ad
Advertisement
Ad
Despite a frantic final attack from the Slovakians, Czechia was able to hold on for a one-goal win.

Game two of the day was the first time we got to watch one of the Canucks’ prospects in action.
Left-shot defenceman Joni Jurmo got into Finland’s top-four as the left-side defenceman on the second pairing.
It was a rough start to the tournament for Jurmo. His nerves were showing as he made multiple turnovers in his first few shifts and iced the puck with an inaccurate breakout pass. You can see the physical potential in Jurmo’s game but his decision-making and inability to make simple plays continue to hold him back.
Jurmo was basically benched for the period after his first three shifts. He had one short shift in the final 14 minutes of the period and appeared to be replaced by Aleksi Heimosalmi on Finland’s second pairing.
Advertisement
Ad
Advertisement
Ad
The good news for Finland was that they came out of the first period with a two-goal lead. Joakim Kemell scored both goals in the period and Finland took care of business without Jurmo.
Let’s hope we have more positive things to say about Jurmo as the tournament goes on. He is already on thin ice when it comes to being a player who is in the lineup every game and his first few shifts of the tournament were definitely noticed by Finland’s head coach Antti Pennanen.
The second stanza had a much better start to for Jurmo. He drew a holding penalty early on and Finland capitalized on the power play when Brad Lambert scored to make it 3-0.

Canucks prospect Joni Jurmo out for an early shift in the second period.

Jurmo uses his speed to draw a holding penalty. 👍👍

Brad Lambert scores on the ensuing power play to make it 3-0 for Finland.

Advertisement
Ad
Advertisement
Ad
Finland was much better in the second period as they controlled a large majority of the offensive zone possession time.
It appeared as Jurmo’s pairing was being rotated through three different defencemen. Aleksi Heimosalmi and Jurmo each took turns with Kasper Puutio on what began to look like the team’s bottom pairing.
Jurmo had a couple shots on net in the period.

Nobody questions Joni Jurmo’s physical abilities and his acceleration shows on this skate around the offensive zone that ends with a shot on goal.

His movement in the offensive zone showcased the better parts of his game.

Good movement from Joni Jurmo to get another shot on goal — this one comes from the slot.

Probably want to one-time that slot shot but I like the quick step to the left to create an easier passing lane to him.

Advertisement
Ad
Advertisement
Ad
Finland added one more goal in the second period and went to the second intermission with a comfortable 4-0 lead.
Latvia got on the board early in the third period with a power play goal to cut Finland’s lead down to 4-1.
The Latvian goal didn’t faze Finland and they were able to add two late goals and secure a relatively easy 6-1 victory. The Latvians played hard and didn’t roll over for the much stronger Finnish team. Latvia won’t be knocked for their effort level this tournament but they do lack the skill to hang with the top teams.
As for Jurmo, he definitely improved as the game went on. His worst plays came during his first few shift so you could believe that his struggles came from nerves or rust.
Advertisement
Ad
Advertisement
Ad

Another shot on net for Joni Jurmo.

He finished the game with three shots on net and 10:30 of ice time.

He is excited to get his feet wet in the #WJC

"Had pretty bad first shifts because I wanted to show i can play so I kinda tried "too hard" but i felt good after that."

Finland’s next game should be a bit more of a challenge as they face Czechia on Thursday at 11 am.

We were pleasantly surprised to see another Canucks prospect in their junior team’s lineup for this game.
Advertisement
Ad
Advertisement
Ad
Left-shot defenceman Jacob Truscott made the cut to be one of USA’s starting six defencemen and would be on their second-pairing. Truscott was in the pregame lineup as the right-side defenceman with Wyatt Kaiser as his partner.
It was a quiet period for Truscott, and we kind of expected that. There’s a simple, no mistake play-style in his game and he didn’t make any mistakes but also didn’t blow us away with skill like Luke Hughes did.
Hughes was damn good with the puck and it helped that Germany took a five minute major penalty to close out the final few minutes of the period. Hughes walks the line with such confidence and in a similar way to Quinn — Luke uses the blue line to his advantage when shaking the opposition.
Advertisement
Ad
Advertisement
Ad

The eagle is back. #WorldJuniors 🇺🇸 pic.twitter.com/9wRaRMmqGn

It was Hughes who opened the scoring and then Logan Cooley added a power play goal late in the period.
USA was dominant in the opening 20 minutes as they outshot Germany 25-4.
They were in the driver’s seat for most of this game, but Truscott started to be a lot more noticeable in the third.
He was leading breakouts, carrying the puck through the neutral zone, and wasn’t afraid to attempt shots from the point down the stretch in this one.
He was noticeable in the offensive zone more than anywhere else, which is probably a good thing as a defenceman. Truscott even had a nice little sequence where he got a shot on net from the point, then regained possession after a failed Germany clearing attempt and slid the puck across to his partner Luke Hughes for a quality chance.
Advertisement
Ad
Advertisement
Ad
We will be back soon with coverage of day two, as Jonathan Lekkerimäki and Team Sweden get set to face off against Switzerland at 11 AM Pacific.