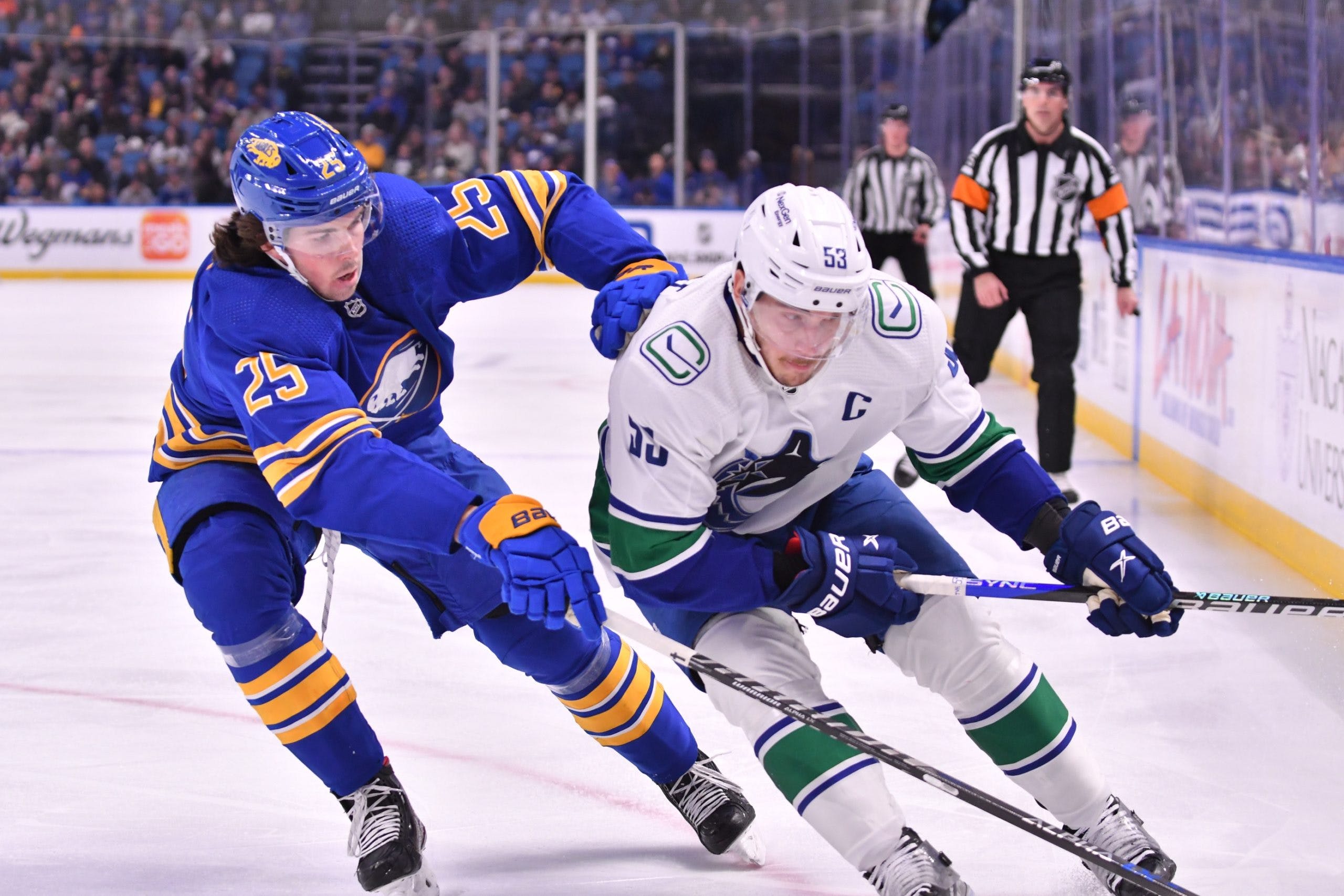 Photo credit: © Mark Konezny-USA TODAY Sports
By Michael Liu
2 months ago
Comments
Welcome to The Statsies, brought to you by NHL odds site Betway!
That was some way to close out this road trip.
The Vancouver Canucks hang on to beat the Buffalo Sabres 5-4 in an action-packed game. It’s a far cry from the effort seen in Vancouver’s home opener just a couple of weeks ago, and there’s a lot to unpack in this victory. The important part is that the Canucks got the win, and managed to get some great games individually along with it.
Here’s the game by the numbers.
As always, you can find our glossary guide of advanced stats here.

This is an example of what happens when this team plays for a full 60 minutes. Though it was at the tail end of the road trip, it was probably the most complete game the Canucks were able to put together in a long while. Through the first two periods, they had the ice tilted in their favour, dominating puck possession and expected goals. Through the first two periods, Vancouver held a slight 53.85 CF% edge over Buffalo, but were heavily outchancing them (55.55 SCF%, 68.42 HDCF%).
Advertisement
Ad
Advertisement
Ad
The third period was a display of excellent defensive hockey as well. Though Buffalo managed to push back with puck possession, they didn’t manage to get a lot out of it. In fact, the Sabres finished the period with a mere 0.69 xGF though they were getting a massive 68.42 CF% in the third. These metrics suggest the Canucks were able to limit their opportunities effectively with the lead at hand, even after giving up the goal to cut it to a one-goal game. Vancouver also posted a tremendous 1.65 xGF in this period, suggesting that they were able to get grade-A opportunities when given the chance. 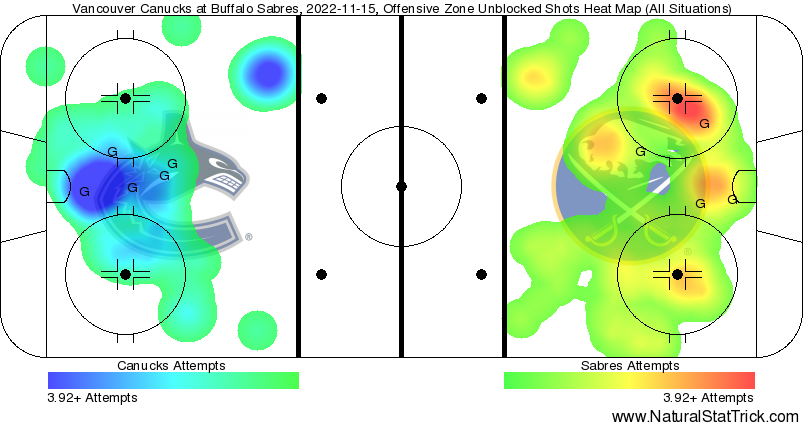 An excellent heat map for the Canucks. Defensively, there isn’t much to complain about at all. If the most chances you’re giving up on a given night come from the left faceoff dot, you’re doing something right. Vancouver appears to have forced the Sabres to be too selective in their shots, taking them from areas that aren’t likely to lead to goals. No deep red is observed, meaning that there was a singular hole the home team was able to exploit in their defence.
Advertisement
Ad
Advertisement
Ad
Offensively, the Canucks got the chances they were looking for. It’s been a pattern as of late for there to be a hot spot from the right point, perhaps a coaching choice to generate defections and rebounds. In whichever case, Vancovuer also established their presence in the slot, a large majority of their shot attempts coming from that area. All of their goals were scored in these high-danger areas, which is always a good sign for team success.

Corsi Champ: Bo Horvat made mincemeat of the Sabres. The captain of the Canucks was all over the ice last night making plays, and it showed in the advanced metrics he turned in. Horvat led all Canucks in CF% (61.11) while playing the most minutes against the Sabres’ top line. He made it look easy out there last night, generating 23 scoring chances while only allowing 8 against. Horvat’s price tag just seems to climb higher and higher with each game, showing how valuable he is to this team.
Advertisement
Ad
Advertisement
Ad

Ethan Bear scores his first #Canucks goal off a great shot. Bo Horvat with a strong setup as well. The Canucks have another dreaded two goal lead. pic.twitter.com/BF8fQCRzVs

Corsi Chump: Even in this game full of positives, someone’s got to take home the chump award. Nils Åman earns it with his 25.93 CF%, easily the worst on the Canucks roster. That being said, Åman didn’t have a poor game. A function of his poor Corsi is caused by the fact that he only started 4/19 faceoffs in the offensive zone, as well as handling a shutdown role on Buffalo’s second line. While Åman gave up a lot of Corsi against, he didn’t concede a single high-danger chance against, showing his effectiveness as a matchup player.

The #Canucks fourth line gets the ball rolling with some terrific passing between call-up Will Lockwood and Nils Åman before Dakota Joshua rips the puck past Craig Anderson. 1-0 Vancouver pic.twitter.com/Il7McSLhBo

xGF: This one is also taken home by Horvat, and in somewhat commanding fashion. He was absolutely incredible at both ends of the ice, putting up a team-leading 3.06 xGF while only giving up 0.68 xGA the other way. His xGF% of 81.78 is second to Conor Garland’s 83.28, but Horvat definitely is the deserved winner of this award. He recorded 7 HDCF with 2 HDCA, with a 77.78 HDCF% on the night.
Advertisement
Ad
Advertisement
Ad
GSAx: For the first time in a while, Spencer Martin has recorded a negative GSAx. With Buffalo only putting up an expected goals for of 2.66, Martin’s 4 goals against means that he is a -1.34 GSAx on the night. Not that it matters much for the result, but it was probably the first game in which the netminder wasn’t saving the Canucks’ bacon heavily. On the bright side, not a single goal Martin gave up was a low-danger chance.

who would have ever imagined at outset of season that Spencer Martin would have 4 of #Canucks first 5 wins?

Locking down the fourth line: Will Lockwood made his season debut and looked to be a perfect fit alongside Åman and Dakota Joshua. Though their line’s CF% wasn’t the greatest (38.46, second worst on the team), Lockwood-Åman-Joshua led the Canucks in xGF% (75.39) with no high-danger chances against, and were the best line in xGA (0.11). Lockwood himself had the lowest xGA (0.12) of any Canuck. It might only be the Buffalo Sabres, but this unit had good energy all night and were able to get results when it mattered. Hopefully, this is a sign of things to come from Will Lockwood’s impact.
Advertisement
Ad
Advertisement
Ad

Will Lockwood shuts down not one, not two, but *three* Sabres breakout attempts late in the third. #Canucks pic.twitter.com/5V5gVA1W0W

Mikheyev and Kuzmenko’s struggles: The two Russians were not doing too great alongside Elias Pettersson. Andrei Kuzmenko was coming off of his first career healthy scratch, while Mikheyev wasn’t particularly impressive against the Bruins. Both wingers posted significantly lower CF% than their centreman (Mikheyev – 41.94, Kuzmenko – 46.15). This difference could be attributed to Pettersson’s power play time, but even when looking at 5v5 play, Pettersson’s 48.15 still comes out ahead of his wingmen. Together, they recorded the second-worst xGF% on the team (56.47) and the second-worst HDCF% (66.67). It’s not the end of the world, but it is concerning to see. Kuzmenko only saw 11:06 minutes against the Sabres, putting him behind even Dakota Joshua (11:21).
Ethan Bear’s big night: Not only did he get his first goal as a Canuck, Ethan Bear was posting some really good defensive metrics throughout the night. He did the heavy lifting alongside OEL (CF% with: 60.00, CF% without: 75.00), generating good chances and retaining the puck well. Bear actually led all Canucks at 5v5 play in CF% (62.07) and xGF% (74.42), which is rare to see from a defenceman. Things are looking good for the newest Canuck defenceman, with Bear playing a key role at the end of the game last night to help see this result through.
Advertisement
Ad
Advertisement
Ad

some really interesting ice times for #Canucks. OEL just 17:40 on night. Didn't play final 3:21. Hughes final shift was with 2:47 to go. Nux leaned on Schenn, Bear, Burroughs and Myers to see game though

CF% – 46.34% HDCF% – 68.18% xGF% – 61.72%
The Canucks played a smart game against the Sabres. They got their lead through good puck possession and chance generation, making efficient use of the opportunities they got. When the Sabres pushed back, they defended well, conceding possession to make use of dangerous counterattacks. It’s a rare 60-minute effort from Vancouver, one that’s been hard to come by this season. They’ll be hoping that this is the start of a new norm.
The Canucks return home with a couple of days rest, before taking on the LA Kings at Rogers Arena on Friday.
Stats provided by naturalstattrick.com