Advertisement
Ad
‘National Concussion League’: Matthew Highmore’s agent calls for ban to all hits to the head after Canucks vs. Avalanche game 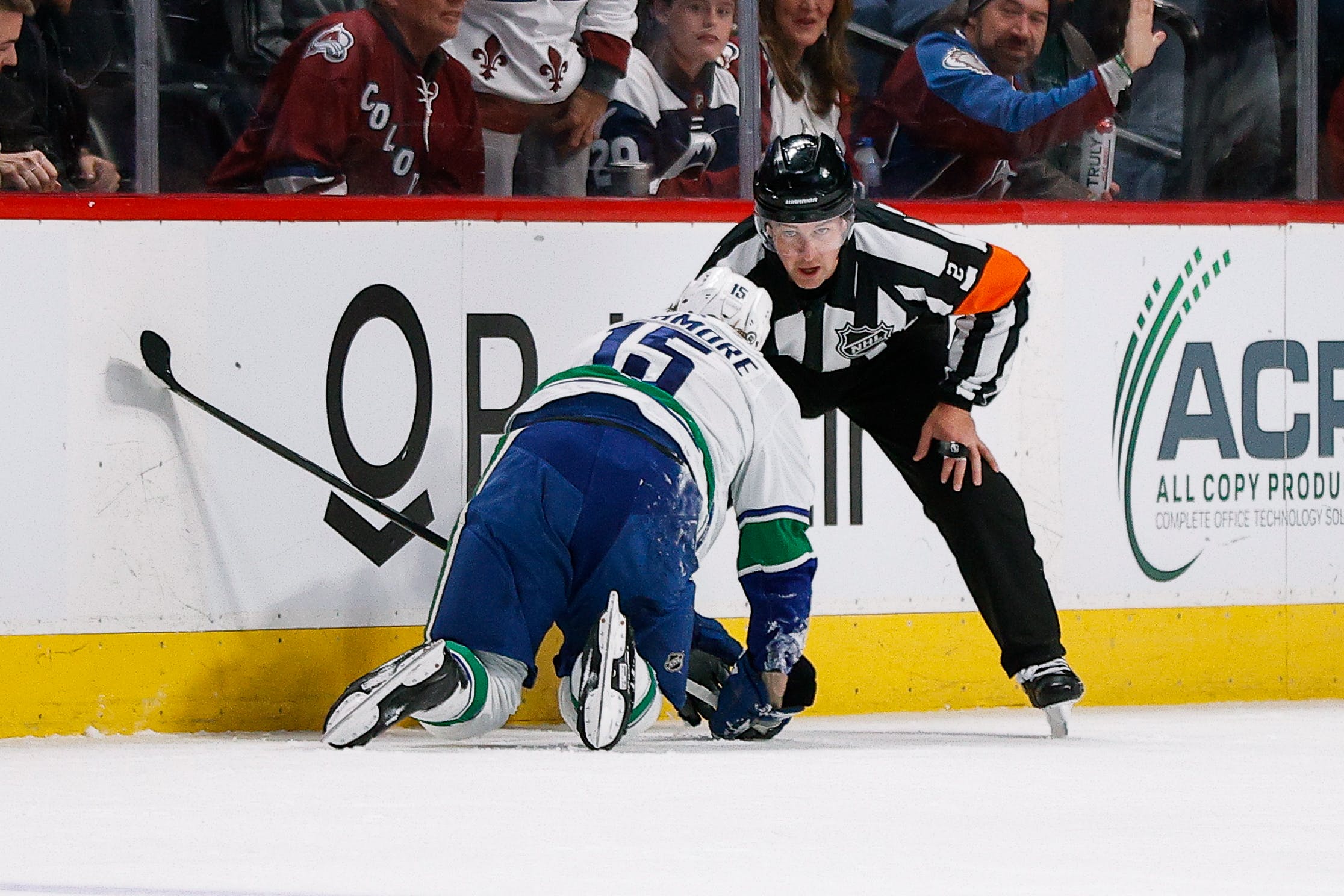 Photo credit: © Isaiah J. Downing-USA TODAY Sports
By David Quadrelli
8 months ago
Comments
Wednesday night’s tilt between the Colorado Avalanche and Vancouver Canucks was memorable for a lot of reasons.
The Canucks were the clear underdogs heading into the game and had their backup goaltender Jaroslav Halak — who has struggled as of late — in net against one of the NHL’s most potent offences.
But fans may have felt that their team also overcame another challenge en route to their victory.
NHL refs.
The Canucks were called for six penalties in the game and the Avalanche just two, but hey, that happens, and every fanbase feels like the refs are out to get their team.
But there were a few hits to the head on Canucks players that went uncalled, and Canucks fans — along with Matthew Highmore’s agent Alan Walsh — weren’t too impressed by them.
Advertisement
Ad
Advertisement
Ad
“The National Concussion League is having another predictable evening,” Walsh, who is part of the Octagon Hockey Group that represents Jonathan Drouin, Victor Hedman, and others, wrote in a tweet. “Head shot after high hit. Mark my words, this will all snap back on the NHL for ignoring player safety. BAN ALL HITS TO THE HEAD.”
Here’s what Walsh was likely talking about.
First, there was this hit to the head on his client, Matthew Highmore.

Tough to know what to make of this one. MacDermid may have caught Highmore up high but Highmore was reaching for the puck. Didn't look like MacDermid elevated at all. #Canucks pic.twitter.com/T1J8L9Xk92

Totally missed this in the scramble to do Armies, but @mbassi22 is right, Logan O'Connor ran through Podkolzin's head and extends his elbow. Refs had zero interest in calling anything against the Avalanche tonight.

In the first clip, Highmore was making a play on the puck and was lower to the ice as a result. Under the current rules, this typically isn’t called a penalty — even though Highmore had to go to the quiet room to be evaluated afterwards, which appeared to be head coach Bruce Boudreau’s main gripe with the lack of a call.
But Walsh isn’t complaining about refs missing a call — he’s bringing something much more serious up: The NHL allowing hits like this to go completely unpunished and therefore welcomed in their league.
Advertisement
Ad
Advertisement
Ad
This definitely isn’t the first time Walsh has criticized the NHL for their handling of concussions. Earlier this season, Walsh highlighted Avalanche defenceman and B.C. native Bowen Byram’s ongoing situation with concussions.

A young NHL player was diagnosed with a concussion, suffered symptoms for 19 days. His 1st game back, he’s hit in the head, leaves the game and is allowed to return?? When he gets home that night, his mother says she immediately knew he didn’t look right. https://t.co/gC9u9smU1A

Walsh also spoke candidly with ESPN in 2017 about the NHL’s concussion lawsuit, saying the following:

“Many retired players in hockey are suffering from serious neurological issues that impair their day-to-day quality of life on a spectrum where players are dealing with severe depression, memory loss, anger and anxiety issues, seizures — to the point where they cannot keep a job.
I had a former client who I represented for years call me last year, and he said, “Allan, I need some help. I was driving home from the supermarket — I live two miles from the supermarket and I got lost and couldn’t find my way home. I called my wife in tears, ‘Help me come home. What street do I turn on?’ I’ve been doing this drive for 10 years and I can’t get home anymore.”
That’s the kind of stuff that is going on, and that’s what people need to know and understand. When Gary Bettman wants to challenge the medical consensus out there now and say the study of CTE and concussion is still in a nascent state, he’s wrong. The medical consensus out there now amongst all serious medical researchers, neurologists and doctors — peer-review studies — is that subconcussive blows to the head have a causation factor with the future development, potential development of CTE. There’s a lot we don’t know. We do know this: CTE does not exist except in the brains of athletes or people who had concussions. It’s not something found in the general population amongst people who have never had a blow to the head.”

Advertisement
Ad
Advertisement
Ad
Walsh is certainly not the first person involved in the game to suggest banning all hits to the head, and he won’t be the last, either.