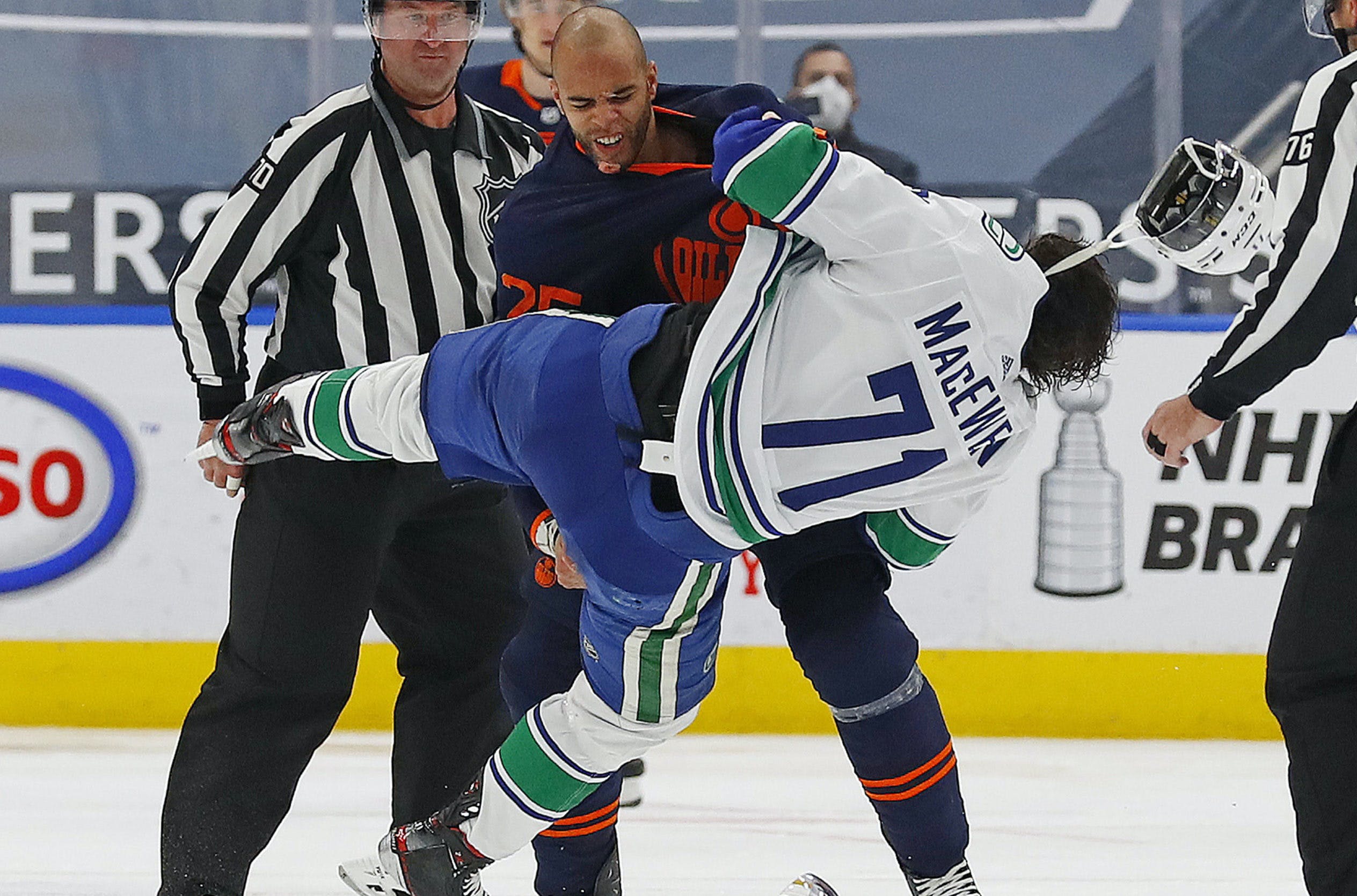 Photo credit: © Perry Nelson-USA TODAY Sports
By Sean Warren
1 year ago
Comments
After a wild week of NHL action that featured what can only be described as a debacle between the New York Rangers and Washington Capitals, the NHL’s Department of Player Safety has been under heavy scrutiny. As many waited on bated breath to see the outcome of a public statement from the Rangers stating that George Parros should be removed from his position due to a “dereliction of his duties”, it felt inevitable that we were on the precipice of change in the NHL. For better or worse.
Although the results in the short term have been power moves made by the NHL to protect Parros which resulted in a $250,000 fine to the Rangers for their statement, this story is far from over.
The Rangers statement may not have resulted in immediate change but it did pour Miracle Grow all over the seeds of doubt on the department’s credibility. It is nearly impossible to read that statement and not wonder how many other teams feel the same way but aren’t bold enough to speak up.
Advertisement
Ad
Advertisement
Ad

Commissioner Gary Bettman would go on to defend Parros adamantly.

Bettman would go on to share that “several NHL executives have provided a rally of support” for Parros and the disciplinary department. Yet, every team has had players that are poorly protected by Player Safety.
With the current system gathering more and more distrust, how can that be corrected and how can players be protected more effectively?
The NHLPA needs to take over disciplinary decisions for the NHL. These decisions should not be held with the league itself as it creates a conflict of interest. There have been credibility issues with disciplinary decisions for years, and it’s time for a change.
Advertisement
Ad
Advertisement
Ad
The NHLPA is an obvious choice as they represent and have vested interests in both parties so would want to act fairly without acting too harshly with an offending player while still providing enough safety and justice for the victim. The current CBA runs through the 2026 season so the NHLPA has a while yet before they could start negotiating a proposal like this into the agreement but it gives them plenty of time to work out what it would look like and how to push for that change.
First, the NHLPA DoPS should have someone that is qualified to oversee the department rather than another former NHL player that likely was on the delivering end of many suspendable offenses, such as hockey violence advocate George Parros. The department should be headed by a doctor that specializes in brain trauma and CTE. This way, the NHL could show real development in protecting player’s heads and have someone qualified to identify dangerous head contact involved in protecting against such contact. Assisting the department head should then be a former player that could help advocate for the players by sharing experiences on in-game decision making and situations. This way, the decision process is as fair and uncorrupted by outside sources as possible.
Advertisement
Ad
Advertisement
Ad
Second, punitive measures should be meaningful and bring cause for potential offending players to think more before acting. With the example of Washington Capitals forward Tom Wilson and his sucker punch to Rangers forward Pavel Buchnevich, Wilson’s incurring of a $5,000 fine is hardly an impactful deterrent for the repeat offender. In fact, Wilson made more money than that while sitting in the penalty box. So why would he be concerned with the results of his actions on the ice? What prevents this from happening to another player again?
The solution is to continue suspending based off severity of the incident and history, but in cases where fines are issued, the fine should be a percentage of the offending player’s annual salary rather than a flat capped fine that is of minimal consequence. Fines, like suspensions, would increase in severity based on the incident in question and the history of the player.
Advertisement
Ad
Advertisement
Ad
Ultimately, the goal is for more than just fair judicial decisions that can impact the team and player in question. It’s about actually protecting the players on the ice. If there aren’t meaningful and uncorrupted measures in place to force players to consider their actions, then there will always be instances where a player shows a complete lack of control, respect, and liability on the ice. In the city of Vancouver, we know all too well what that can result in and yet it feels as though the NHL hasn’t learned anything over the last 17 years since the dreaded Todd Bertuzzi-Steve Moore incident took place on March 8, 2004.
The NHL players need and deserve more consistent safety protocols and measures put in place. Hockey as a whole needs it. It’s time for the NHLPA to step up and be more involved in protecting the players on the ice rather than just their escrow off of it.
Advertisement
Ad
Advertisement
Ad

Put the blame squarely where it belongs. This is on Gary Bettman. If he truly cared about “player safety”, violent acts on the ice intending to injure opponents would be appropriately punished. The NHL has learned absolutely nothing since the Steve Moore travesty. 1/2

Same with traumatic brain injury. If Gary truly cared about “player safety”, there would be a strict liability rule against hits to the head. Find another name for the “Dept of Player Safety” and end the charade. It’s time for more than just talk, it’s time for action. 2/2