Advertisement
Ad
Carolina’s Ethan Bear has been given permission to talk to other teams, should the Canucks be interested? 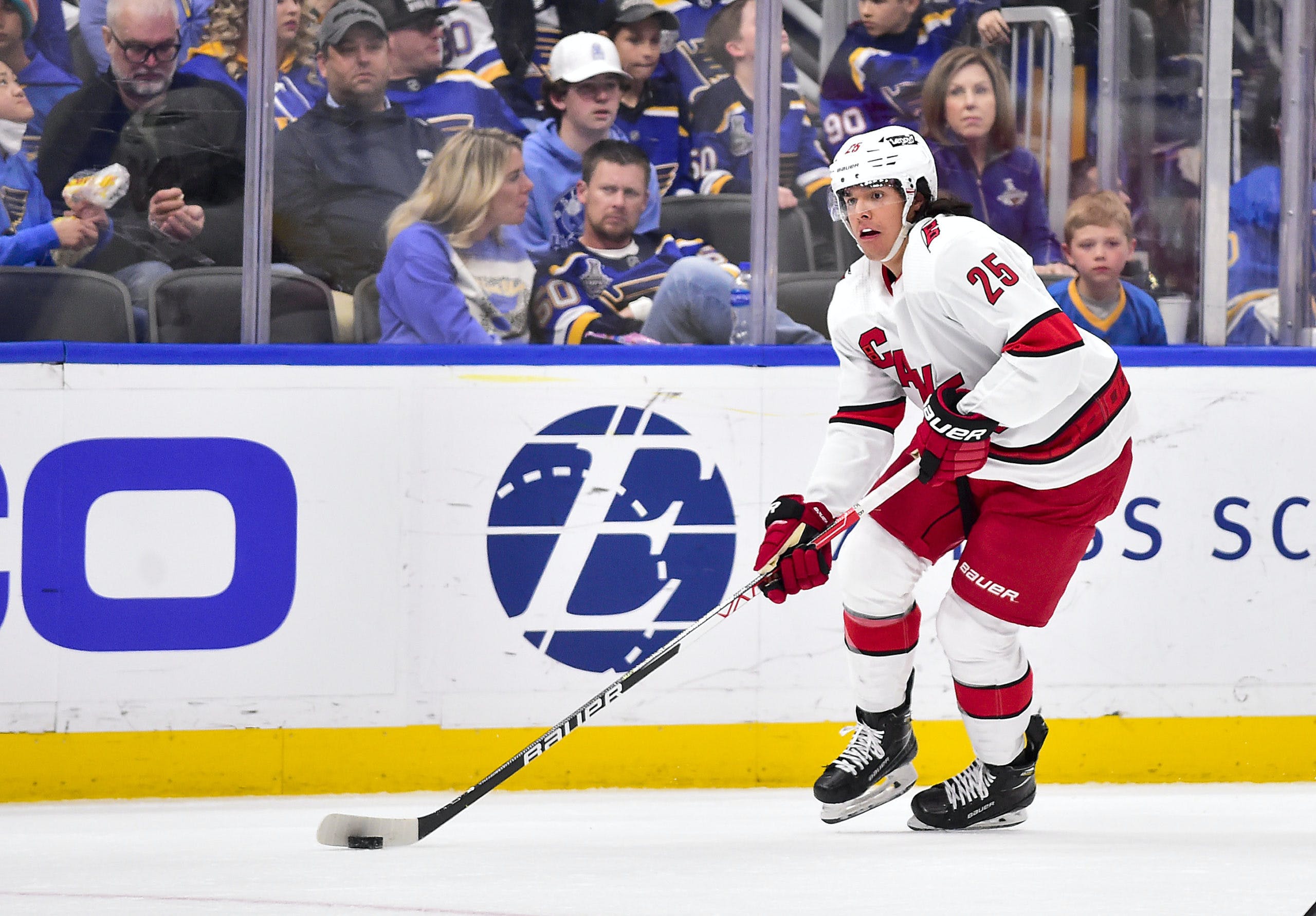 Photo credit: © Jeff Curry-USA TODAY Sports
By Michael Liu
5 months ago
Comments
After a disappointing second-round exit to the New York Rangers, the Carolina Hurricanes are looking at an offseason full of questions. One of them has already cropped up in the form of Ethan Bear. Arriving last season in exchange for Warren Foegele, the former Edmonton Oiler was expected to be a solid option on Carolina’s backend. That didn’t exactly happen, and now, the team’s given him permission to speak with others as a pending RFA.

CAR has given RFA Ethan Bear permission to talk to other teams. From what I hear, Hurricanes still wish to sign Bear, but two sides are not close on an agreement. Remember, nothing can happen before July 13 without Carolina approval.

A look at Ethan Bear

Standing at 5’11 and weighing 197 pounds, Bear might not be the biggest defenceman on the market. However, he does have a very important physical attribute: he’s a right-handed shot. For a Vancouver team that’s been needing some solidification on the right side, this alone is already an intriguing proposition.
Bear was drafted in the 5th round of the 2015 NHL Entry Draft by the Oilers, appearing in 190 games and putting up 47 points across four seasons so far into his career. The defenceman spent the first three seasons in Edmonton before being dealt to Carolina last summer.
Last season was not easy for Bear. He started the year off in the top four with Jaccob Slavin, putting up 6 points in 16 games and averaging 18 minutes of ice time. However, Bear tested positive for COVID-19 on November 22nd, putting him out of commission for a week. He never really looked the same when he returned, losing his spot in the lineup by season’s end and being scratched during the playoffs.
Advertisement
Ad
Advertisement
Ad
As Bear got dropped down to the third pair, his shot suppression unfortunately went with it. Just take a look at the heat map comparing his 2021-22 season with the season before.

Ethan Bear’s defensive heat map from @HockeyViz looks frightful after this season but he was outstanding defensively the season before. I’d be willing to take a chance on him getting back to his previous form. pic.twitter.com/gLqoK1riEb

That being said, most of that ugly red is on the left side of the ice, suggesting that his partner wasn’t exactly holding up their end of the bargain. In fact, some underlying numbers point to Bear as being one of the more effective defencemen on the Canes roster. He posted a 56.4 CF%, putting him second on the team among defencemen who played more than 50 games, as well as leading in the least giveaways. Ironic, considering that he’s best remembered for a giveaway that allowed the Jets to even up game 4 in the 2021 playoffs.
Advertisement
Ad
Advertisement
Ad
Something that jumps off the screen when watching the tape on Bear is his skating. While he’s no Quinn Hughes, Bear is quick and constantly keeps his feet moving, allowing him to walk the line and stay with attackers in the defensive zone. His tenaciousness and ability to keep forwards to the outside, forcing them into the boards and coming up with the puck is downright impressive. He isn’t afraid to play physically even if he isn’t the biggest player on the ice. Couple that with a quick stick and good defensive instincts, Bear can make a positive impact on the back end.

Small complimation of Ethan Bear's play over the past few games

Note how a lot of them are against players on the 1st line like Schiefele, Gaudreau and Connor, and also note how he's doing this with little time with the top 6. #LetsGoOilers pic.twitter.com/dkb7L3TW9X

Advertisement
Ad
Advertisement
Ad
He also has untapped offensive potential. Yes, 47 points in 190 NHL contests isn’t the most impressive, but Bear’s demonstrated that he has a great shot. During his time with the Oilers, he was able to exploit the weak side of the ice with an excellent wrister or slapper whenever given the chance. Bear’s head is constantly on a swivel, pinching at opportune times to make life uncomfortable for the defence.

Bear also has the potential to be a fan favourite. He’s been a role model for Indigenous communities all across Canada, overcoming systemic barriers with his patented work ethic. UNINTERRUPTED produced an excellent short video about Bear’s struggles, which can be watched here.
Advertisement
Ad
Advertisement
Ad
It’s important to take last season in context with his career. Bear showed that he could handle himself in heavy minutes. In his rookie season of 2019-20, Bear played the third-most minutes amongst Edmonton defencemen, averaging 21:58 TOI a game. This came with matchups against top lines from opposing teams, playing against the best that they had to offer.
The improvement he’s shown year after year is encouraging, even if the offensive totals aren’t exactly there. The advanced analytics show that his CF%, xGF%, GF% and SCF% are all at or above 50, meaning that Bear’s controlling the play in a positive manner when on ice. It also should be noted that Carolina’s systems result in their players being analytic darlings, but the eye test matches with what it shows in the case of Bear.
Advertisement
Ad
Advertisement
Ad

Ethan Bear has been given permission by CAR to speak to other teams about a new RFA contract.

Results were okay in a depth spot but he had better two-way results in a bigger role in EDM. Easy to forget he played some of the biggest minutes in the NHL in 19-20. #LetsGoCanes pic.twitter.com/AtewopucMt

This begs the question, why would Carolina let Bear talk with other teams if he’s shown himself to be a potential top-4 option? It’s a combination of his qualifying offer and his fit with the Canes. Bear’s QO is set at $2 million, which isn’t much, but the Hurricanes also have 10 players to sign with around 19 million in cap space. That includes the likes of Martin Necas, Max Domi, and Tony DeAngelo, not to mention any improvements they would want to make on the roster.
Advertisement
Ad
Advertisement
Ad
There’s also been a reported gap in Bear’s valuation of himself and the team. It makes sense, with Carolina deeming him healthy scratch material, while he’s shown that he can fit in a team’s top four. This could also be a result of his fit in the Carolina system, just not being the right type of defender for the team.
So, should the Canucks be interested?
They absolutely should be in the mix. Bear is still young, at 24 years old there’s still plenty of development to be had. He’s a right-handed defenceman that’s capable of playing in the top 4 and has shown himself to be a good, responsible defender with offensive upside. He’s a buy-low candidate that could prove to pay dividends really soon.
Evolving Hockey projects Bear’s next contract to be at around $2.8 million. It’s good value for what a team will get from him. If the Canucks decide to offer sheet him at or around that price, a second-round pick will be given up in compensation. Only 35% of second-round picks have gone on to play more than 100 NHL games historically, so there is something to be said about giving up a lottery ticket.
Advertisement
Ad
Advertisement
Ad
Otherwise, a trade could be within the realm of possibility. Consideration has to be paid to Carolina’s cap situation and the players that have and want to resign. It’ll be a juggling act to balance that and the Canes want for a win-now piece, especially after these past playoffs.
At the end of the day, I think the Canucks should absolutely be interested in getting Ethan Bear. He’s demonstrated that he can be a decent top 4 option and has room for improvement. A young, cap-friendly right-handed defenceman is a rare commodity in the NHL, and Vancouver could benefit greatly from having cap space to play with.
And who knows? Bear could end up being the perfect fit alongside one of the many talented LHD in the Canucks lineup.
More from CanucksArmy:
Advertisement
Ad
Advertisement
Ad