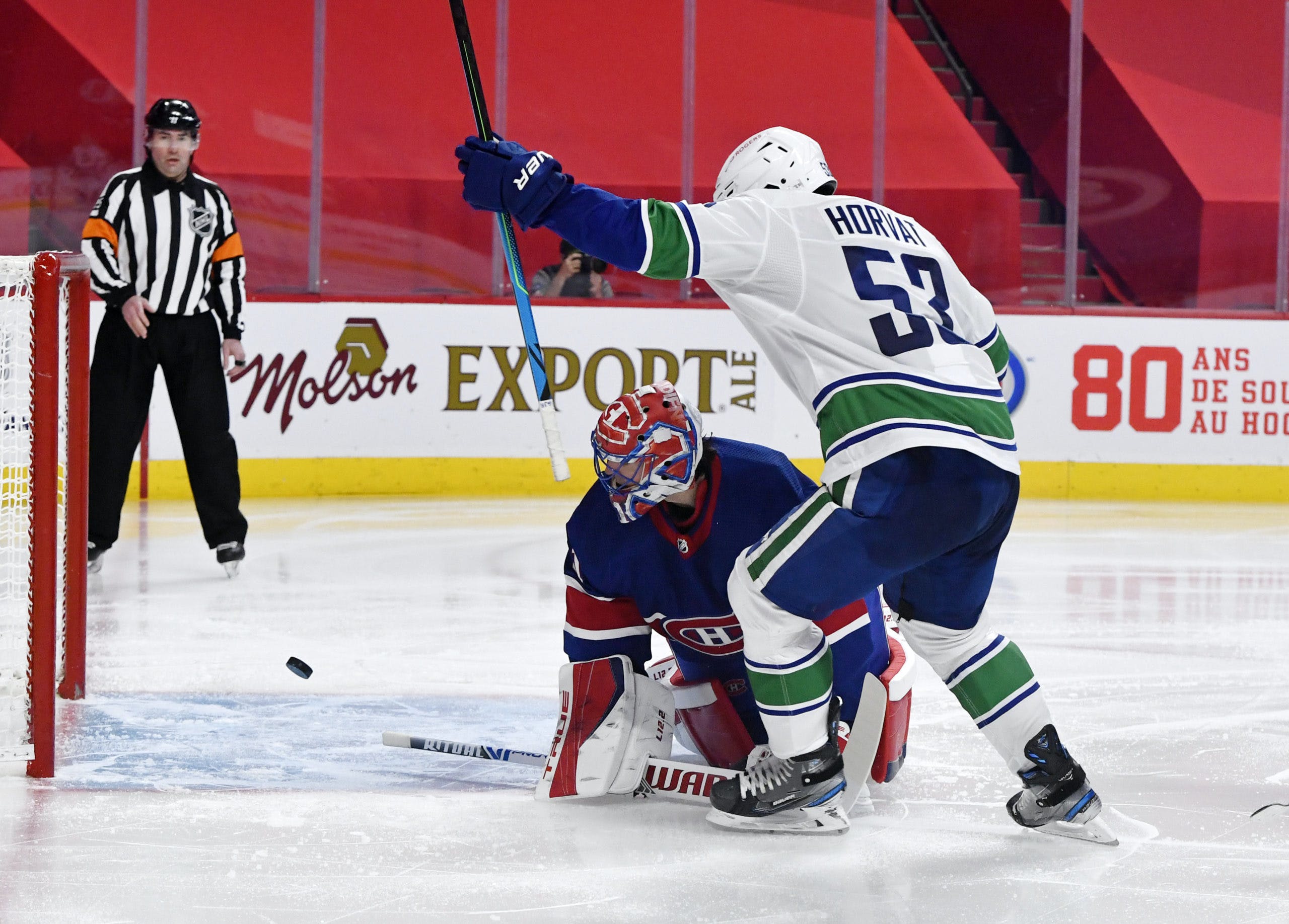 Photo credit: Eric Bolte-USA TODAY Sports
By Clarissa Sabile
1 year ago
Comments
Coming off a 3-2 OT dub yesterday, the Canucks confronted the Canadiens in the back half of a critical pair of back-to-back games. While game one went in the Canucks favour, game two was snagged by the Habs 5-4 in the shootout and both teams ended the series with three standings points.

The game marked both teams’ ninth and final meeting in the regular season, and they sit right next to each other in the standings. The Canucks’ four-game win streak isn’t convincing most fans though, as they’ve been caught with phantom penalties, dropping their leads late, and causing me extraneous stress.
Elliotte Friedman disclosed that Tyler Toffoli was Day-to-Day with a lower body injury, so that’s a few less breakaway chances against the Canucks (hopefully). His buddy from their LA Kings days in Tanner Pearson also still sits with a lower body injury, for at least four weeks. Additionally, Elias Pettersson was officially placed on Long Term Injury Reserve last night after the game, meaning he won’t be able to play until April.
Advertisement
Ad
Advertisement
Ad
And, of course, both Toffoli and Pettersson are on my fantasy league team. Pain.

Braden Holtby gets the start, which is probably the best decision long-term on their Eastern Canada road trip to make sure Thatcher Demko gets his rest. Let’s see how Travis Green’s shuffled lineup works its magic again.

It’s never a good sign when Tyler Myers takes an interference penalty. But we also wouldn’t be experiencing classic Canucks hockey without it!

The Canucks’ PK was decent, until Nick Suzuki picked a corner to beat a screened Holtby. Amazingly, he scored around the same spot yesterday on Demko to tie up the game, so at least he’s consistent with it. 1-0 Canadiens.
Advertisement
Ad
Advertisement
Ad

#Canucks went 16:32 without a shot on goal to end the first period.

The dreaded “No Shot” counter popped up at a point, stating that they didn’t have any shots on goal for more than half of the period. Which made sense, because the Habs maintained possession and the Canucks struggled to start anything when they managed to get into the offensive zone.
Vancouver ended the period with two shots on goal (both from defencemen), outshot by Montreal with ten and a goal. Let’s get something done in the dreaded second period, shall we?

Vesey and Miller turn the puck over on the forecheck and find #ShotGunJake in the slot who beats Price to tie the game at 1 early in the 2nd period! #Canucks pic.twitter.com/PQCgnedsWW

Advertisement
Ad
Advertisement
Ad
Twenty-two seconds in, the Canucks indeed got something done. A proper neutral zone transition, forechecking from new waiver pick-up Jimmy Vesey and quick pass from J.T. Miller to a charging Jake Virtanen led to the game equalizer.
Suddenly, I forgive Big Tuna for that punch yesterday. 1-1 Tied.
The neutral zone opened up, tilting the ice in favour of Vancouver. Then, Brett Kulak gave them their first power play of the night for holding. Who shoots a lot of rockets?

You guessed it: our goal leader Brock Boeser scored his seventh PPG of the season, giving the Canucks the lead. Captain Bo Horvat also secured an assist, achieving his 300th NHL point. 2-1 Canucks.
Shortly after, a streaking Victor Mete tried to go right-side above Holtby’s blocker, but he remains the wonderwall he is. After more than thirty minutes of play, both teams were playing with grit. Myers was just about to get sent back to the penalty box for getting into it with Brendan Gallagher, until the Canadiens did… this.
Advertisement
Ad
Advertisement
Ad

Tomas Tatar's shot gets through some bodies and beats Holtby to tie the game at 2. #Canucks #GoHabsGo pic.twitter.com/HofgpWNA21

The Habs pressured the Canucks behind the net, getting the puck to Tomas Tatar at the point. He found the back of the net after a line of friendly screens blocked Holtby’s line of vision. Maybe don’t blind your goalie if you don’t want to risk your body to block the puck. 2-2 Tied.
The Canucks struggled in their own zone following the goal. I had a bad feeling about it, and my gut was right.

Joel Edmundson's shot gets through the traffic and beats Holtby. #GoHabsGo retake the lead on the #Canucks pic.twitter.com/mvICEhdieE

A distracting Gallagher and Tatar at Holtby’s doorstep and a tricky wrist shot from Joel Edmundson gave the Habs the lead within the final few minutes. 3-2 Canadiens.
Advertisement
Ad
Advertisement
Ad
So the Canucks were down by one and had to play catch-up going into the next period. Again.

If I told you the Canucks scored two goals in thirty-three seconds, would you believe me? I wouldn’t, but that’s exactly what happened.

The Canucks score early once again: Horvat won the faceoff (as he usually does) and Quinn Hughes’ shot is tipped by the Captain. 3-3 Tied.

Some seconds later, Tyler Motte walked in and buried it past Price. MotteGirlSpring definitely in full swing. 4-3 Canucks.

Advertisement
Ad
Advertisement
Ad
But wait, there’s more! Another clean face off win, this time by Phillip Danault, goes straight to Gallagher, beating Holtby left-side. He always finds a way to pick violence, even against his hometown NHL team. 4-4 Tied.
That was all before the halfway point of the third period. I know, it’s one of those games.
In the final five minutes of the period, the Canadiens continued to outshoot us, but the Canucks managed to hold on for sudden death 3 on 3 in overtime… again. I’m offering $1 to anyone that counted how many times I said ‘again’ in this post-game.

Holtby and Price both make some great saves on Drouin and Boeser to send this game to a shootout #Canucks #GoHabsGo pic.twitter.com/8wAhsUr1wB

Both teams played carefully, the Canadiens specifically turning back and throwing the puck back to Price several times to keep possession.
Advertisement
Ad
Advertisement
Ad
Just as I was about to say it was getting boring, Danault and Drouin had some dangerous chances on Holtby and Price made a beauty save on a Boeser breakaway on the other end. Shootout it is.

Look at the hands on Corey Perry #GoHabsGo
🎥 @Sportsnet pic.twitter.com/Z9T6oalfSY

Corey Perry faked and Holtby bit. The second SO goal for the Habs in the season. ✔️
Thankfully, Brock Boeser said “au contraire” and got Price to react first, scoring in retaliation. ✔️
Round 2
Jonathan Drouin shot wide on Holtby, trying to go right blocker side. ❌
J.T. Miller was our hero last night… but not today. Price rejects him. ❌
Round 3
Nick Suzuki tried a backhander, but was stopped by Holtby. ❌
Advertisement
Ad
Advertisement
Ad
Bo Horvat tried to go stick-side on Price, but it went wide. ❌
Round 4
Kasperi Kotkaniemi’s first attempt of the season… missed the net. ❌
Adam Gaudette made a shifty move, but Price stretched out for a flexible stop. ❌
Round 5
Paul Byron tried going between Holtby’s blocker, but he was tracked all the way. No goal. ❌
Newest Canuck Jimmy Vesey had a chance… but his backhand was gloved by Price. ❌
Round 6

Tomas Tatar, evidently on fire this game, had some hands to prove and scored on Holtby. ✔️
So the rookie Nils Höglander had the game on his hands and he… shot wide. ❌
Final score: 5-4 Canadiens

Bo Horvat doing Bo Horvat things, nothing to see here. His goal and assist made him become a neighbour to the likes of Trevor Linden and Pavel Bure, in points recorded under the age of 25.

Brock Boeser can score, we knew that already. If we can get more power play action… Elias, get well soon. We need you in the drawing penalty department.
Advertisement
Ad
Advertisement
Ad

good news: #Canucks just a shot away.
bad news: getting that shot may be an issue.

By retweeting this Tatar goal, you can help raise awareness to end the practice of screening your own goalies. #Canucks pic.twitter.com/To8VVU1WG0

In the last 48 hours #Canucks twitter has jersey’d the Twitter account for the biggest podcast in hockey media, and located Jimmy Vesey’s abandoned vehicle in Kanata. https://t.co/pUFzM1qG5d

No context for this last one, sorry. If you know, you know.

If you ever visited Playland at the Pacific National Exhibition in Vancouver, you probably rode the wooden rollercoaster. It’s literally falling apart and I feel like I’m about to fly out at every peak. That’s what this game felt like. The ice was tilted back and forth so many times, and both teams held out.
Advertisement
Ad
Advertisement
Ad
Overall, the Canucks still have a shots on goal problem. Which doesn’t really matter if the few shots they manage to shoot actually become goals, but the Habs had way more opportunities. It also seems like the Canucks really wake up in the latter half of the game, then always fall short near the end.
The veteran goalie show featuring Holtby and Price at the shootout was fun, at least.

The Canucks now head home to face the Jets at 7PM (PST) on Monday March 22 and 7:30PM (PST) on Wednesday March 24, then they *double-checks notes* have a 6-day break, after almost 3 months of continuous action.
Their last longest rest period was 3-days back in February, and they continue to reign with most games played in the North Division and entire NHL with 35 including tonight. I think it’s safe to say they deserve this downtime.
Advertisement
Ad
Advertisement
Ad