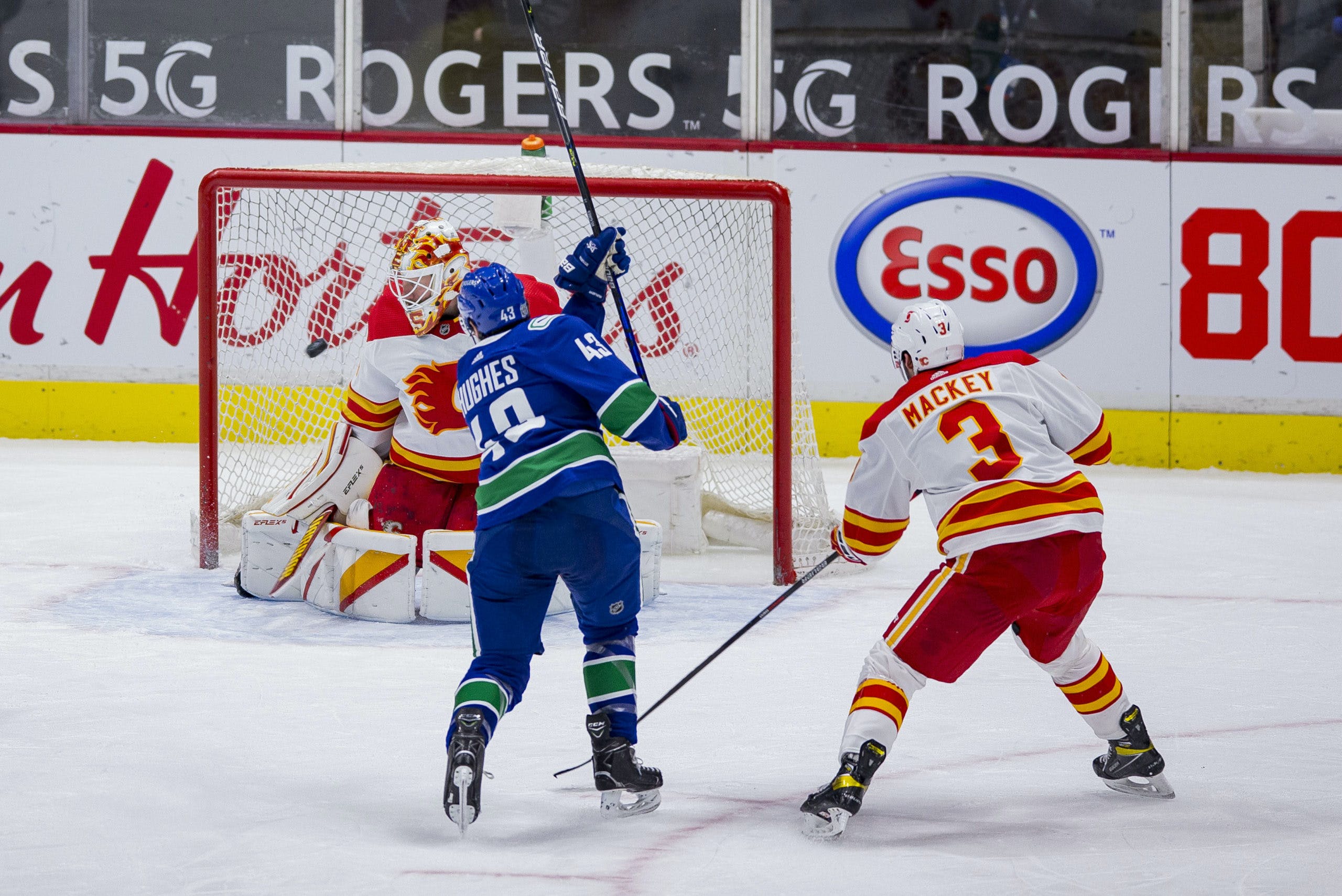 After a tough loss on Thursday, the Vancouver Canucks re-engaged with the Flames in the second of four consecutive games. Heading into tonight’s game, the Canucks carried a six-game losing streak.

Elias Pettersson As Cats
[a thread you didn’t know you needed ] pic.twitter.com/FrvnkUFKtY

To divert from the negativity, a Twitter thread of Elias Pettersson as cats was something a lot of Canucks fans needed to see. It was definitely a sight for sore eyes after seeing them comfortably hang out at the bottom of the Canadian division with the Ottawa Senators. Don’t look at that @JFreshHockey tweet about Quinn Hughes either.

Arrivals looking a little different tonight, mixing it up. pic.twitter.com/PJe3hmc5tj

The gang went no dress code prior to puck drop. I hoped they would casually stroll into a win tonight as well.

Here’s to the first Canucks win in a while. Happy Hockey Day in Canada!

Thatcher Demko was given the net against Jacob Markstrom once again. Tyler Motte and Justin Bailey were both placed on IR. Both are tough losses based on Motte’s physical contributions and Bailey’s grade-A scoring chances he was generating alongside Adam Gaudette. Jayce Hawryluk was activated from the taxi squad, but he wasn’t in the lineup tonight.

I know the Lotto line is seemingly reunited, but there’s a lot of eyes on that fourth line too…

The Canucks were spending a good amount of the first twenty minutes in the Flames’ zone thanks to faceoff wins, but Markstrom remained solid and stopped air-wristers easily with his glove.

Shot attempts were definitely a good thing, but both teams weren’t giving each other alarming opportunities either.

What’s immediately noticeable tonight is the third forward on the forecheck staying higher in the zone. That support has allowed Vancouver defenders to play tighter and defend the red and blue line. I wasn’t able to watch last game but this looks a lot better than the TOR series

Brett (@MirokiOnDefence on Twitter) makes a key point, explaining why the Flames weren’t able to take advantage of vulnerable puck passes as previous teams did (cough Canadiens, ahem Maple Leafs). The Canucks were keeping their heads up and maintained spatial awareness whilst forechecking.

If anything means fewer giveaways, I’m all for it.

Spicy chances when Höglander is on the ice! Horvat goes down hard while tied up#Canucks
3/ pic.twitter.com/jg8uZsgPtu

Near the end of the period, J.T. Miller made space for himself fresh off a line change. His shot found its way to Alex Edler, who tried putting it back to the net for a hungry Bo Horvat. Unfortunately, Horvat didn’t get the shot off after falling down to the ice with a Flame.

Elias Pettersson also had a chance off a turnover after Loui Eriksson put a backhand pass on his tape, but Markstrom stopped him up close as well.

There just wasn’t enough traffic in the Flames’ crease through the opening 20, allowing Markstrom to easily pick off the Canucks’ blue line shots.

Edler takes the penalty, loses his stick, drops for the shot-block. Demko with a big save late in the period!#Canucks
5/ pic.twitter.com/p5foXhX3vd

Of course, the first penalty of the game came in the last few seconds against Edler. It was a hooking call pulled by a chicken-winged Matthew Tkachuk (typical).

They end the period scoreless but are left to stay vigilant.

The period that Canucks fans rightfully dread began on a crucial penalty kill that carried over from the first, leaving both players and fans on their toes. The boys built impenetrable walls at their blue line, shutting Flames players down on entries and causing the Flames power play to struggle to get set up all night long.

Again, the Canucks went full artillery mode with their shot attempts. Horvat had a few good chances again, but nothing cracked Markstrom. Except, well, this:

Quinn Hughes looks pass all the way and then top shelf with the snipe pic.twitter.com/I9wVUShVgs

The first goal of the game goes to the Canucks player who inspired my Twitter username: Quinn “Wolverine” or “Huggy Bear” Hughes. Again, forecheck pressure forced Sean Monahan to fan on his pass, leading Hughes to walk straight to the goal, fake a pass to Pettersson that made both Juuso Valimaki and Markstrom bite, and whip it into the net.

Sam Bennett with a huge response for the @NHLFlames.

Well, I spoke too soon. A minute later, Sam Bennett pounced on a puck that bounced to him and buried it as Monahan screened Demko. 1-1 Tie.

The momentum could have gone either way at this point. Both teams had relatively identical opportunities on both ends. Demko made a big save on this point-blank Monahan shot.

Thatcher Demko stretches it out to rob Sean Monahan in the slot #Canucks #CofRed #HockeyDay pic.twitter.com/OluLrI9Q0V

Good to know he’s still the brick wall I knew him for.

The period ends with two more penalty kills; one drawn by Mangiapane on Edler, and another on Tanner Pearson for tripping former teammate Josh Leivo. Fortunately, the Canucks barely allowed lanes for the Flames. They had good sticks to deflect passes, forcing the Flames to rely on dump and chases in order to gain the zone.

Personally, I’d prefer to not end the period on another penalty, but Demko made another great save on a tic-tac-toe play with Lindholm between the hash marks. Brick. Wall.

Shots were 35-12 for Vancouver after 40 minutes, leading into a critical final period for both teams.

The Canucks played with a rightfully frantic pace in the first five minutes. A Pearson pass to Miller nearly found the back of the net, and Demko made a big save on a Monahan tip. Everybody was gunning for that GWG, but the goalies were zoned in.

Nils Hoglander moves to the slot and rips a backhander off the pipe and out #Canucks #CofRed pic.twitter.com/PmcTHGHvuy

Hoglander (yeah, I’m not tired of hearing his name either) created another grade-A chance, skating through two Flames and backhanding the puck above Markstrom’s shoulder. It hit the top left bar with that extremely rude ping sound, to all of our amazement and disappointment.

Markstrom stopped even more dangerous opportunities, including but not limited to a few pad saves on Boeser and Adam Gaudette’s bouncing puck attempt (shown above). Demko stole the spotlight too, with an insane save on Valimaki.

It’s crazy to think the Canucks had both of these goalies just last year.

Olli Juolevi has been making humble, beneficial plays. He was bashful during his first goal, but he conducted several key defensive moments. Like this one, standing up his 2016 draft buddy in Tkachuk.

And who had this on their bingo card? Tyler Myers with the heart-lifter, carrying the puck into the Flames’ zone alone and flicking it through a screen. Pettersson was there to tap it in as insurance. 2-1 Canucks.

Myers cuts into the Flames zone and his shot gets through Markstrom for the goal! Pettersson might have tapped it home but the #Canucks have a 2-1 lead pic.twitter.com/LznoC5kk0x

And, to make matters even better, Sutter picked off a pass and launched it to the empty net. I wish he gave it to Eriksson, but we’ll take what we can get. Final score: 3-1 Canucks.

Commentary terms used to describe Hoglander: impressive, shifty, exciting. I said this once, I’ll say it again: if he plays like that without the umlaut on his jersey, imagine how he’d play with it?

Juolevi has been very steady, a number of subtle and smart plays all night. His best game in the NHL so far

Juolevi has been making his spot on the roster known, with careful defensive plays and maintaining a noticeable physical presence. You can’t hide from us, Olli.

a win they desperately needed. Good for Demko. Not as busy as Markstrom, but couldn’t afford to blink at 1-1. And didn’t.

The Flames didn’t make it easy for him, but Demko got his deserved win tonight. Although the final SOG were quite tilted, Demko snatched several dangerous opportunities away from his opponents and didn’t have to worry about deflections off his own teammates. Happy for him.

Why aren’t we talking more about the fact @kbieksa3 has Ryan Kesler’s ESPN body issue photo in the background 😂 @Sportsnet @hockeynight pic.twitter.com/017VCVvBmT

Juolevi moving Tkachuk out of the way like he did at the 2016 draft pic.twitter.com/SIBPMkzrnd

Terrific team effort tonight! Now let’s get on a roll.

At this point, every game is a must-win. In a Sportsnet 650 interview from Thursday’s postgame, Markstrom said he’s semi-rooting for the Canucks anytime they’re not playing Calgary, so why not let in a goal for Swedish buddies Pettersson or Edler (give! him! goal 100!), just for old times’ sake? The boys figured something out, which had a lot to do with winning faceoffs, gutsy puck controlling, and entry denials.

If all the Canucks fans in Vancouver let out a big, exasperated sigh of relief out our windows, I’m sure the players would hear us from Rogers Arena. This win was, as every win is, very needed, and broke the six-game losing streak that has effectively disappointed both the players and fanbase.

After the final horn, some rough stuff between the #Canucks and #CofRed with Tkachuk grabbing Edler and Giordano and Beagle pairing off as well. pic.twitter.com/YfdldVtmrt

A little animosity never hurt anyone… well, sometimes it does, but this scrum at the end of the game didn’t. I’m secretly hoping history repeats itself with an opening line brawl, but we’ll see how this carries over to Monday’s game, set for 7 PM PST at Rogers Arena once again.