Where should Andrey Kuzmenko play in the Vancouver Canucks’ lineup? 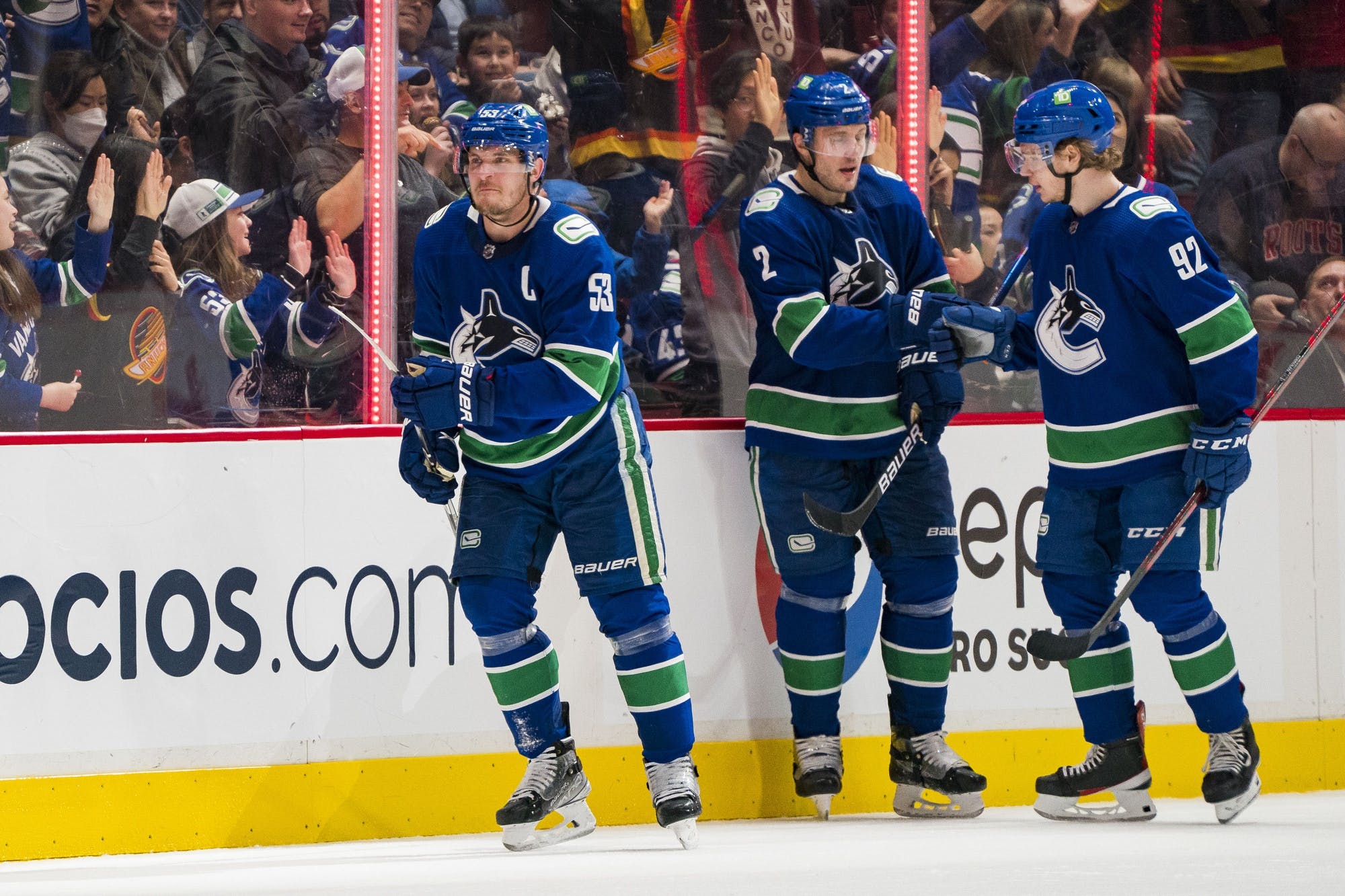 By Stephan Roget
7 months ago
Andrey Kuzmenko is coming to Vancouver.
And make no mistake; despite the fact that the 26-year-old is going to be on a sub-$1 million entry-level contract for his first year, and is still waivers-exempt, Kuzmenko is going to be on the Canucks’ opening night roster for the 2022/23 season.
The only real question is where.
Obviously, where Kuzmenko slots into the Canucks’ lineup is dependent on a lot of factors, including the play of he and his linemates through training camp and the exhibition schedule. But that doesn’t mean we can’t try to project, anyway, especially since a few of the factors are already known.
For one, it stands to reason that Kuzmenko will mostly stay on the left wing. It’s his primary position, the one he’s played almost exclusively before, and the spot in which the Canucks currently need the most help. That’s a no-brainer.
It also stands to reason that Kuzmenko will probably be given a shot in the Canucks’ top-six. Or their top-nine, if they decide to try to roll three relatively even lines again. Whether or not he was promised such a role during contract negotiations, he’s got the skill level to earn one, and the Canucks will want to put him in a position to succeed. Kuzmenko’s game seems far more suited to a top-six job than one in the bottom-six, and, again, that’s probably where the Canucks are going to need him, especially if they trade one or more established top-six forwards.
The odds are good that Kuzmenko will at least begin the season on the left wing in the top-nine, and probably the upper-six of that top-nine, too.
Beyond that, the choices and options are less important, but still worth considering. Should Kuzmenko line up with Podkolzin, with whom he has history back in the KHL? That would seem to be a wise idea, but it’s not set in stone. Prior chemistry can make a difference, but so can newfound chemistry.
Far more relevant will be the pace and style of play of whatever line Kuzmenko finds himself on. Kuzmenko has the skating and stickhandling ability to beat some defenders one-on-one and create his own chances, though his playmaking game tends to rely on possession down low and protecting the puck. He’ll make opportunities for himself through the neutral zone and opportunities for others in the offensive zone. He can shoot almost as well as he can pass, and his defensive skills have also gained him ample praise. But it’s the setting up of other players that scouts keep coming back to, and that bodes well for finding a spot that works.
The reality is that Kuzmenko could probably fit with just about any line combination within the Canucks’ top-nine.
But which fit is best?

Under the continued assumption that Kuzmenko makes the team as a left wing in the top-nine of the Vancouver Canucks, here’s some potential line combinations that he could find himself a part of.
Kuzmenko-Horvat-Podkolzin
All the talk of Kuzmenko’s ability to control the game down low and generate chances on the rush might remind some of Horvat’s own offensive style. The two might be too similar to mesh, but if it works out, you can throw Podkolzin on the other side of them and end up with a two-way possession-dominating line.
Kuzmenko-Pettersson-Podkolzin
If Pettersson is going to be a full-time center this season, he’s going to need a quality left wing in his life, and if JT Miller is traded, Kuzmenko might just be the next best candidate. We can envision both Pettersson and Kuzmenko being multifaceted threats all over the ice, but a line with Podkolzin would make its money in the offensive zone, with Kuzmenko down low, Pettersson in his usual office, and Podkozlin working the slot.
Kuzmenko-Miller-Podkolzin
The addition of Kuzmenko probably presages the trading of Miller, but if both end up on the roster, it’s probably worth trying them together. Slotting Kuzmenko and Podkolzin on either side of Miller creates an ad hoc top line while still leaving room for Pettersson- and Horvat-centered units, granting the team more depth down the middle.
Kuzmenko-Horvat-Boeser
This is the sort of line that would crush in an EA Sports NHL game. You’ve got a playmaking winger, a two-way power center, and a designated sniper all in one combo. Playing Horvat on this particular line, however, would probably mean reducing his shutdown minutes, and who’s going to take those?
Kuzmenko-Pettersson-Boeser
Assuming Miller is traded, could the next version of the “Lotto Line” include Kuzmenko in his stead? A line like this would be dangerous from everywhere, and nearly perfectly balanced. All three can create space, make plays, and finish set-ups to a high degree, and each of the three has their own unique speciality. Expect to see some form of this combo on the power play, too.
Kuzmenko-Miller-Boeser
With Miller still in the mix, there’s a possibility for another “Lotto Line” revamp, but this time it’s Pettersson’s spot being occupied by Kuzmenko. This combination could be the one that maximizes Kuzmenko’s numbers, especially if Miller has another 99-point season in him, and should allow the Canucks to roll three lines.
Kuzmenko-Horvat-Garland
Despite a general lack of height, this unit would be a lot for opponents to handle in the offensive zone. Picture Kuzmenko and Garland using their edgework and puck possession to dominate in the corners while Horvat bulls through the middle of the ice. The addition of Kuzmenko could spell the end of Garland, but if both stick around there’s some intriguing collaborations possible.
Kuzmenko-Pettersson-Garland
This is the sort of line that would normally only come out of a third period blender, but we can see some logic in throwing together three highly-skilled players to see what might happen. Let Pettersson carry the puck into the zone and then let Kuzmenko and Garland set him up for some bombs. Sounds like fun.
Kuzmenko-Miller-Garland
Same sort of story here. Miller and Garland had some success together last year with either Tanner Pearson or Alex Chiasson on their other wing. Kuzmenko gives them an offensive upgrade and another relentless play-pursuer to overwhelm opposing team’s defensive sensibilities. Under this scenario, however, someone like Boeser has probably been moved already.
Kuzmenko-Miller/Pettersson-Pettersson/Miller
Here’s a combination that would require the Canucks to keep Miller, but not for the purposes of rolling three top centers deep. And while there’s some draw in really loading up a line like this, it knocks one of Miller or Pettersson to their least-preferred forward position on the right wing, and that’s probably to be avoided.
Kuzmenko-Horvat-Höglander
If multiple top-six forwards are dealt, Höglander could find himself back into the scoring line mix rather quickly. Höglander and Kuzmenko don’t have terribly dissimilar profiles, and putting Horvat in the middle of them could create a true two-way, middle-six line capable of playing all sorts of different deployments. Each of these players can create plays out of nowhere on their own.
Kuzmenko-Pettersson-Höglander
Call us skeptical about this combination. There’s not much size to speak of, but there is an abundance of skill and possessive ability. Give this line the puck, and the other team might not be able to get it back. It’s the meshing that needs to come afterward that might be difficult, as Höglander has failed to combine well with Pettersson in the past.
Kuzmenko-Miller-Höglander
Höglander has had some success on Miller’s right side before, and Kuzmenko sliding in on the right makes some sense. It’s hard to imagine Miller being happy to stay in Vancouver but play on what suddenly looks a lot like a third line, but if they receive quality offensive deployment, maybe he won’t mind?
Kuzmenko-Dickinson-Winger
Those aforementioned defensive qualities possessed by Kuzmenko could lend themselves to a pseudo-shutdown line, even if that’s really not the best way to have him succeed in his rookie campaign. This sort of setup could leave a top-six consisting of some combination of Pettersson, Miller, Boeser, Horvat, Garland, Podkolzin, Pearson, and Höglander, while handing tough middle-six matchups to a Kuzmenko-Dickinson unit. Of course, this would require quite a bounceback from Dickinson, who did not succeed as a 3C last year.
Kuzmenko-Horvat-Dickinson/Pearson
This is an alternative Kuzmenko shutdown line. In this scenario, you’ve got Miller and Pettersson centering more offensively-driven units up top, then Kuzmenko and Horvat handling the tougher matchups on an ostensible third line. Dickinson or Pearson could play out of position on the right side to complete the line, but it’s far from perfect.
Where would you like to see Andrey Kuzmenko in the Canucks’ lineup? Let it be known in the comment section.
More from CanucksArmy:
Uncategorized
Recent articles from Stephan Roget