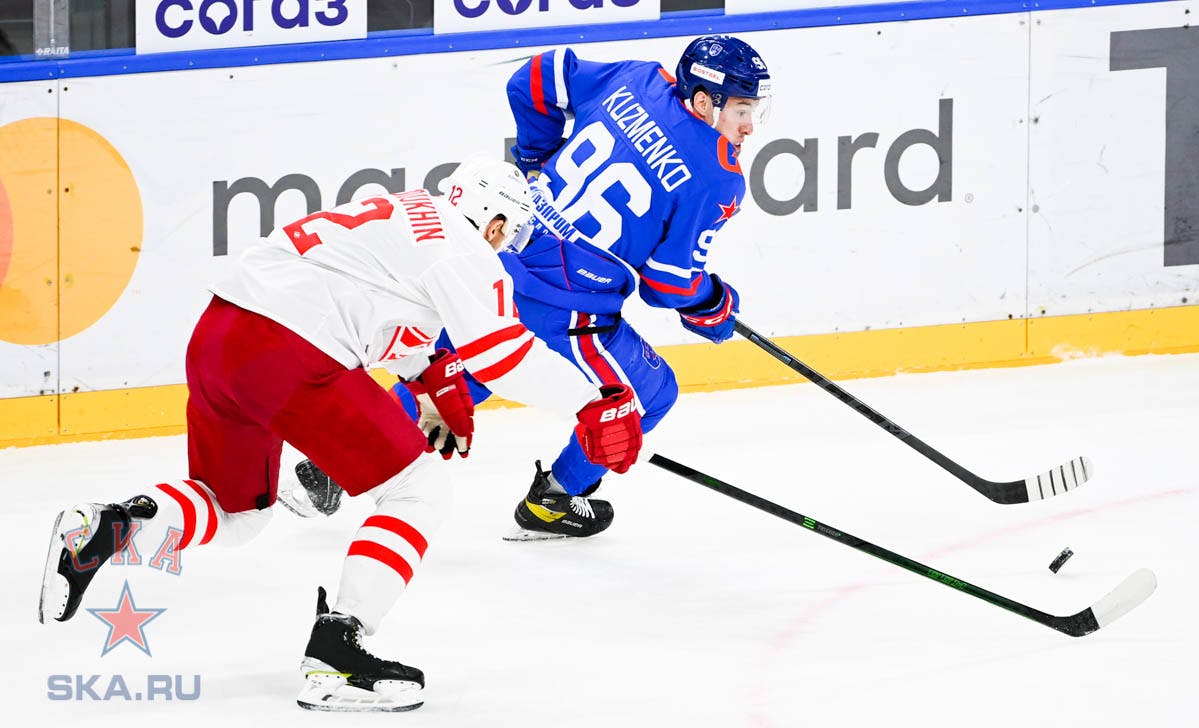 By Faber
7 months ago
It was a long process but the Vancouver Canucks were able to get their guy in the end.
Top European free agent Andrey Kuzmenko is committed to the Canucks and will sign his deal as soon as free agency opens up on July 13th.
Let’s explore the type of player that Kuzmenko is and where he fits with the Canucks.

Coming off a KHL season that saw him put up 53 points in 45 games, he showed well in terms of production, finishing the regular season as the KHL’s second-leading scorer. We only saw one other teammate of his at SKA show up in the top 25 of KHL scoring, so, he was creating a lot of offence without being on a powerhouse SKA team like we’ve seen in Saint-Petersburg in the past.
Kuzmenko did an excellent job of creating offence at five-on-five. He scored 15 of his 20 goals at even-strength and a decent amount of those goals were created from him forcing turnovers and quickly capitalizing on those changes of possession. He appears to be at his best when he has the puck in space through the middle portion of the ice. His intelligent movement through the neutral zone can take KHL defenders out of position and open up good, quality scoring chances for his linemates during odd-man rushes.
His hands look great at the KHL level and his offensive skills look to be at a level where there is no worry about if he will be able to transition the offensive side of his game to the NHL. With some KHL players, you worry about the ability to make quick decisions because the NHL has better defenders, and there is less time and space. The good thing about Kuzmenko is that he thinks the game very well in the KHL and decision-making is rarely questioned when he has the puck on his stick.
He moves well on his cuts but his full stride speed will likely be tested at the NHL level. He is able to gain a step on KHL defencemen but KHL top-four defencemen are comparable to an NHL team’s 7-11th defencemen. Kuzmenko is going to get some tough matchups if he slides into the Canucks’ middle-six and could see a big test if he does slot into a top-six line.
The way he thinks the game in the offensive zone is impressive and he does have the hands to finish. It’s not to say that he was always a step ahead of his teammates at SKA but he was never lagging behind the play, he was the driver on every line that he played on and could look like an even better player when he gets two NHL-calibre players as his linemates. Though he is going to be facing tougher competition, you also have to look to his stronger teammates being able to help carry some of the weight.
Kuzmenko’s finishing will be tested if he gets a chance in the top-six and is playing with players like Elias Pettersson, J.T. Miller, Brock Boeser or Bo Horvat. He finished his season with a shooting percentage that nearly crested 20% and showed that he is not just a one-trick pony who relies on something like having a bomb from the left half-wall or being a bumper specialist.
The 26-year-old right-winger can score from a variety of locations on the ice.
He is very skilled with his spins while possessing the puck and the speed and quickness are at a pace where they should transition nicely to the NHL. He may not be able to spin away from every defender in the NHL as easily as he made it look against KHL competition but he surely will be able to create space with his athleticism in the offensive zone.

The big worries we have are his ability to defend NHL competition. Simply put, we don’t know what Kuzmenko is going to look like when facing NHL top-six lines. He doesn’t lack effort in the KHL and that is a great sign of things to come for his work in the defensive zone once he lands in North America.
The problem still remains that we don’t know how he will fare once he’s opposite Connor McDavid, Nathan MacKinnon, or even Johnny Gaudreau. He likely won’t be strong enough to out-muscle NHL competition as easily as he was able to in the KHL.
Being an effective defender is going to be more about how he uses an active stick, leverage, and quickness to create turnovers. This is why we ultimately think his defending in the neutral zone will not be an issue but still have questions about how he will look inside of his own blue line.
Kuzmenko has a high-end motor and you can probably notice it in some of those goal highlights as he creates turnovers at a high rate. We just need to see how he looks in a stationary defence once the opposition has gained the zone on the Canucks. We liked how he was aggressive to cover the point this past season in the KHL and a high level of effort will be required for him to find similar success in the NHL.
An area where immediate success is imminent will be on the power play unit. We expect to see Kuzmenko get time on the first or second unit as a guy who can chase down loose pucks and be used behind the net as a playmaker. He was a magician behind the net for SKA in the KHL this past season and should be able to transfer a lot of that skill to North America.
All in all, we have confidence that Kuzmenko should fit right in with the Canucks in the attacking two-thirds of the ice. His high-running motor will be effective on the forecheck as well as being disruptive between the blue lines. His skating looks like it won’t be a worry in the NHL and the only thing we don’t know is how he will look defending against opposing top-six lines.
The worst-case scenario we see is Kuzmenko being a power play specialist who plays 7-10 minutes a night on the fourth line. Our high-end, rose-coloured glasses prediction is that he hops right into a top-six role alongside Elias Pettersson and ends up being a 50-60 point player.
Our actual projection is that Kuzmenko will be somewhere in the realm of 12-18 goals and should find himself somewhere in the 32-40 point range. If he is able to pot 20 goals this season, we will be pleasantly surprised.
For a player who is making the league minimum — Kuzmenko will simply add great value to the Canucks for the 2022-23 season.
Kuzmenko absolutely makes this team better and there is basically no risk. If he reveals himself to not be an NHL player, his total contract will be buried in the AHL or maybe he makes his way back to Russia. We believe Kuzmenko will be in the Canucks’ middle-six on opening night and have to imagine that his hands, vision, effort level, and agility will help him find success when he puts on the blue and green jersey as a Vancouver Canuck.
We broke down what the Canucks have in Kuzmenko on the latest episode of the Canucks Conversation Podcast, and gave a four-minute rundown in the video below.
More from CanucksArmy:
Uncategorized
Recent articles from Faber