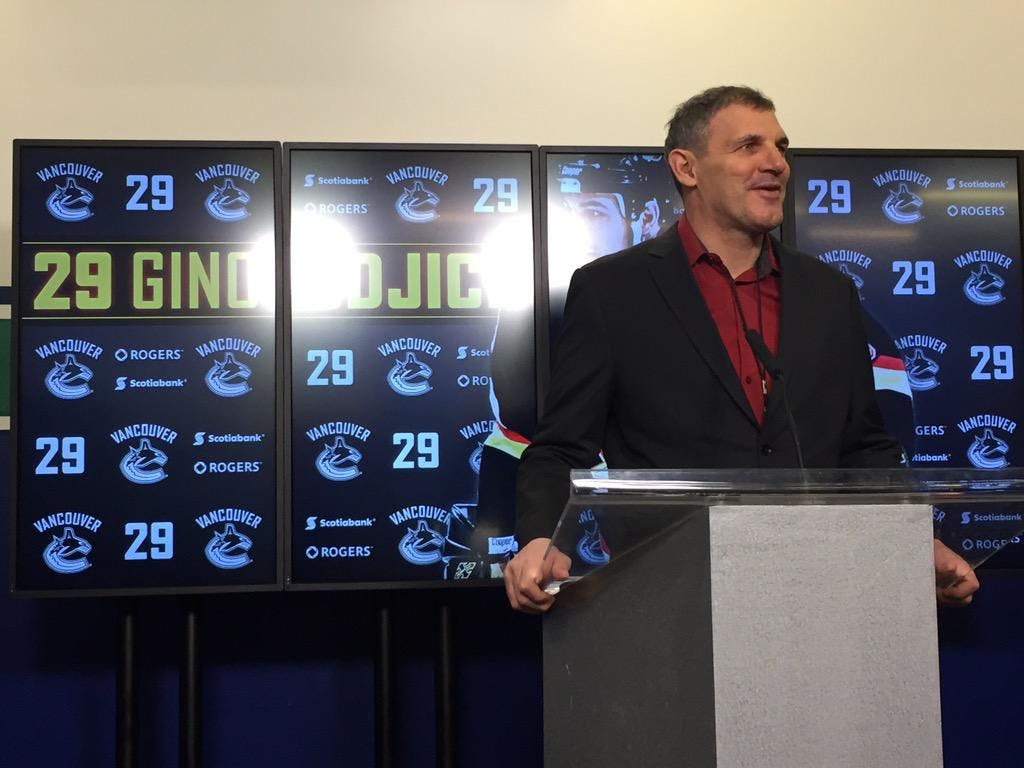 By Mike Gould
13 days ago
Tributes continue to pour in from around the hockey world commemorating former Vancouver Canucks forward Gino Odjick, who passed away Sunday at age 52.
Odjick spent the first eight seasons of his NHL career with the Canucks. He set career-best marks in goals (16) and points (29) during the memorable 1993–94 season, in which the Canucks reached the Stanley Cup Final for the second time in team history.
Hockey Hall of Fame inductee Pavel Bure led the 1994 Canucks with 60 goals in the regular season and 16 in the playoffs. Bure spoke with Russian outlet Sport Express earlier this week about Odjick’s passing.
“Gino’s departure is a huge loss,” Bure said (translated from Russian). “For me personally, for Vancouver, for the entire hockey world. It was a unique player that everyone loved. But first and foremost, he was a true friend. My true friend.
“52 years old is a very young man,” Bure continued. “Gino was selfless, always ready to help on the ice. He did not spare himself for the sake of his partners, helped them, protected the guys from his team. He was a tough guy – it’s a very hard hockey job.
“But he was exactly the same in real life. Always helped friends. Gino was very friendly, funny, loved life. Huge loss.”
Fellow 1994 Canucks teammate Cliff Ronning expressed similar sentiments on both Twitter and Instagram, sharing a post on the latter platform with the caption: “I was very fortunate to have Gino as a friend. He was the greatest teammate anyone could ever ask for. Rest in Peace Gino — Ring of honour!”
Ronning reiterated the call on Twitter for Odjick to become the eighth member of the Canucks’ Ring of Honour, joining Orland Kurtenbach, Kirk MacLean, Thomas Gradin, Harold Snepsts, Pat Quinn, Mattias Ohlund, Alex Burrows, and upcoming inductee Roberto Luongo.
Garry Valk, who played with the Canucks from 1990 to 1993, posted to Twitter: “Sure wish I had a chance to say goodbye. RIP GINO.”
Finally, the Canucks’ current captain weighed in on Gino’s passing after Tuesday’s practice.
“That’s a tough loss, not only for his family and friends but obviously the Canucks organization,” Bo Horvat said. “Everything that he did in the community, for the Indigenous community, for the Canucks organization whether it was charity events and always coming to games, he meant a lot to this organization and to the Vancouver community and all around BC.
“Just seeing highlight clips and fights — he just seemed like the type of person that would do anything for his teammates and that’s the kind of culture we want to have here,” Horvat continued. “Everybody doing it for the guy beside them. He definitely did that, brought it every single night. He would’ve been a heck of a teammate, that’s for sure.
“He was loved by Canucks fans and from what I hear, his teammates as well. He will be greatly missed.”
Horvat and the current iteration of the Canucks will return to action — surely after a tribute to Odjick before the game — on Wednesday against the Tampa Bay Lightning at Rogers Arena.
News
Recent articles from Mike Gould