Jonathan Lekkerimaki arguably has the best shot in the draft: Realistic draft options for the Canucks at 15 By Faber
5 months ago
As we approach the NHL Entry Draft, we at CanucksArmy want to preview some of the realistic options for the Vancouver Canucks to draft if they end up using their 15th overall pick in the draft.
We will explore 10 players who could be available for the Canucks and will take a look at the upside in each prospect that we preview.
Let’s begin with Swedish winger Jonathan Lekkerimaki.

Lekkerimaki is a 5’11”, right-winger who still has some room to fill out before he gets to the NHL.
Though a lot of players Lekkerimaki’s age tend to play a bit of centre, he is purely a winger. Lekkerimaki split last season between the Swedish J20 league and the SHL. He played 26 games in each league as a part of the Djurgårdens organization.
As a pure 17-year-old, Lekkerimaki very much impressed talent evaluators at the SHL level. He finished with seven goals in 26 games in Sweden’s top league and added two assists to his production. As expected, he was much more productive in his J20 play as he totalled up 20 goals and 15 assists in his 26 junior games.
On top of what he produced in Sweden, the numbers that explode off the stat sheet are from his play at the U18 World Championships. Lekkerimaki was far and away the points leader at the tournament with 15 points in six games. 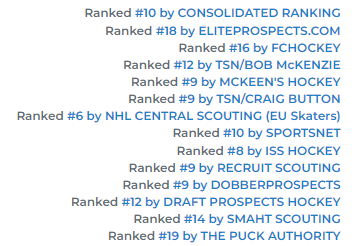 The best part of Lekkerimaki’s game is his shot. When it comes to firing the puck, he without a doubt has a top-three toolbelt in this draft. Lekkerimaki has a tremendous release on his wrist shot, he can fire a one-timer that has pace, and he is dangerous in multiple areas on the power play.
When it comes to skating, Lekkerimaki isn’t the fastest skater at full stride but he looks fluid with his movement through the neutral zone and uses his agility to do an excellent job of carrying the puck in the offensive zone. He has a nice touch in the neutral zone and even in the SHL, he shows an ability to have multiple ways of beating defenceman at the blue line. Lekkerimaki shows a lot of skill when he chips a puck around a defenceman or simply sneaks by a defenceman on the boards by using his agility.

All seven of Lekkerimaki’s SHL goals:

Grade if Canucks draft at 15: A

Getting arguably the best shot in the draft would be a great addition to the Canucks’ prospect pool. Lekkerimaki is consistently showing up in the top-10 of a lot of prospect rankings for this draft and his performance against his age group at the U18s combined with his scoring prowess in the SHL project him to be a top-six winger in the NHL within the next two-four years.
If Lekkerimaki is able to get stronger and build on his already NHL-level shot, he could be a major piece of an NHL team’s power play.
The only reason we are not giving this pick an A+ is that Lekkerimaki is a pure winger. He could very easily be the best player available at 15th overall and the Canucks would get a great prospect if they end up landing Lekkerimaki. He is a tremendous prospect and will be fun to follow as he develops in Sweden for the next one or two years.
More from CanucksArmy:
Uncategorized
Recent articles from Faber