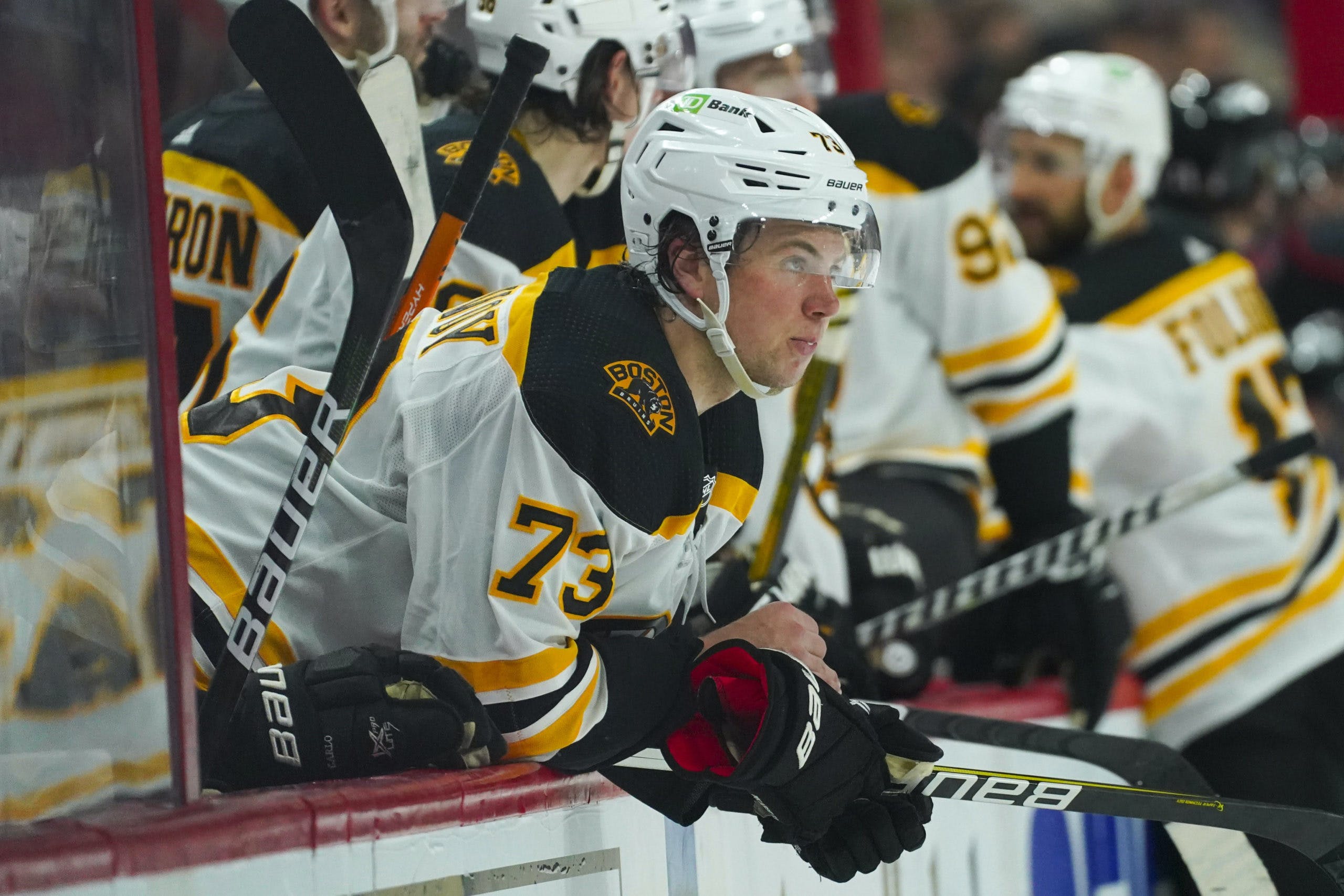 By Noah Strang
7 months ago
After a long stretch of dominance, including a 2011 Stanley Cup victory over the Vancouver Canucks, the Boston Bruins look to be finally headed towards the basement.
Despite a strong 2021–22 campaign, in which they finished with 107 points and pushed a very good Carolina Hurricanes team to seven games in the first round, the start of the Bruins’ 2022 off-season has been nothing short of catastrophic.
One of the largest factors behind the Bruins’ continued success has been the franchise’s ability to surround its core with a rotating cast of solid contributors. Patrice Bergeron and Brad Marchand are the team’s two pillars and have been for over a decade. However, Father Time is finally starting to catch up to the two Canadian superstars.
After winning the Selke Trophy this past season, new reports indicate Bergeron is contemplating retirement. The 37-year-old centre recently underwent surgery on his elbow and is solidly in the twilight of his career, even if you can’t always tell by his play on the ice.
Marchand is dealing with a hip injury that will have him miss the start of next season. The injury issues don’t stop there: Charlie McAvoy, the Bruins’ superstar defenceman, will miss several months while recovering from shoulder surgery.
All these injuries act as the backdrop to the glimpses of chaos recently seen within the Bruins’ front office. Things are shaky in Boston and we might finally be seeing the collapse of one of many Vancouver fans’ most hated opponents.

Earlier this week, the Bruins fired head coach Bruce Cassidy after six strong seasons behind the team’s bench.
Cassidy helped the Bruins reach the 2019 Stanley Cup Final and had no losing seasons during his tenure. Bruins upper management allegedly informed Cassidy that he was safe in his end-of-season exit meeting two weeks ago.
Nevertheless, Bruins general manager Don Sweeney ultimately decided it was time to move on.
“After taking some time to fully digest everything, I felt that the direction of our team for both this season and beyond would benefit from a new voice,” Sweeney said on Monday in the press release announcing Cassidy’s firing.
There were initially some rumours swirling that Bergeron didn’t want Cassidy to be the head coach if he was going to return for one more season. Those rumblings have since been shot down by both Sweeney and Bergeron.

David Pastrnak on the block?

As if the surprising firing of a quality head coach wasn’t enough, it now seems as if David Pastrnak might soon be on his way out of Boston.
The 26-year-old forward is set to become an unrestricted free agent next summer after his six-year, $6.67 million-AAV deal expires.
Pastrnak has established himself as one of the top scorers in the entire NHL. The two-time 40-goal scorer racked up 77 points (40 goals, 37 assists) in 72 games with the Bruins in the 2021–22 regular season.
With the future murky in Boston, will Pastrnak be willing to re-sign after his current contract expires? If not, that makes a trade away from the Bruins — potentially as soon as this summer — more likely. Pastrnak would undoubtedly command a massive return to help the Bruins start a rebuild.

Is the Bruins’ reign over?

A lot has happened in the first few weeks of the Bruins’ off-season. With so many moving parts, there are lots of questions that have yet to be answered. The team clearly lacks a cohesive plan to transition from this core to the next.
The Bruins seem destined to land in the basement of the National Hockey League before long. When it happens, Canucks fans can take pleasure in the downfall — even if the Bruins did manage to eke out another Stanley Cup Final appearance after 2011.
There are still plenty of decisions to be made in Boston, but make no mistake: things are getting treacherous for Sweeney. If he can’t maneuver his way out of this mess, Bruins fans might find themselves running a draft lottery simulator sooner rather than later — and Sweeney might find himself out of a job.