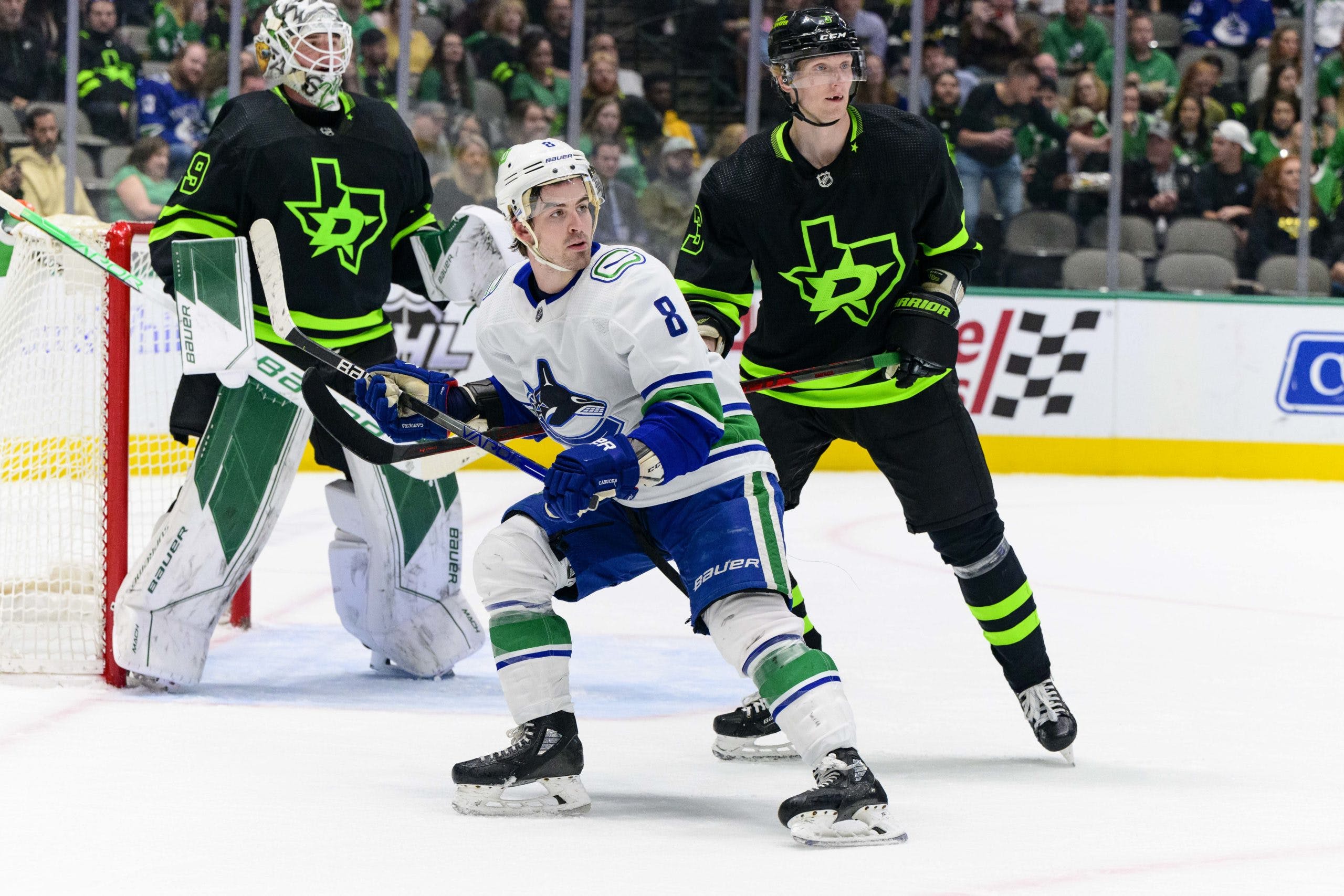 By Noah Strang
5 months ago
Everyone knows that the Canucks need to revamp their defence core and that one way they might do that is to sign free agents this offseason. However, not every free agent defenceman is going to be a good fit with the team. That’s why we’re doing away with the long overview of defencemen and instead, we’re going to look at how compatible they are with the Canucks.
Ideally, the Canucks would be able to find a long-term partner for Quinn Hughes. That player should be right-handed, big, mean, young, defensively responsible, and not cost a fortune, all while being skilled enough to make plays while the opposition is focused on Hughes. There are no players in this offseason’s free-agent class that fit that description.
While the Canucks aren’t going to sign Hughes’ partner for the next decade, there are still serviceable defencemen they could sign. Let’s take a look at some of the names that will be available and if they would be a good fit for the organization.

There are a few big names available this offseason. However, neither appears to be the best fit for the Vancouver Canucks.

P.K. Subban has experienced a sharp decline since his glory days and is no longer one of the league’s top offensive defencemen. He scored 22 points in 77 games last season, a far cry from the 50 and 60-point seasons he recorded in the mid-2010s. He is right-handed, meaning he would instantly slot into the team’s top-four alongside Hughes, Oliver Ekman-Larsson, and Tyler Myers.
He’s never been known as the best defensive player and that hasn’t changed as he’s aged. Subban’s best days are behind him and it’s more likely that he ends up commentating on ESPN than being an impact player for the Canucks.

The most sought-after free-agent defenceman this offseason will be John Klingberg. The 29-year-old Swedish defenceman has played his entire career for the Dallas Stars but now will hit the open market. He’s shown a remarkable ability to create offense from the backend, recording 374 points through 552 games in the Lone Star State.
Klingberg would slot nicely on the Canucks’ right side. However, his play style isn’t something that the Canucks need. With Hughes and Ekman-Larsson already on the roster, and Rathbone in the pipeline, Klingberg would have to fight for PP1 minutes. The price will be too high to make sense for the Canucks.

After those two big names, there’s another tier of defencemen.  Let’s take a look at how they would fit on the Canucks.

Josh Manson is currently playing in the Stanley Cup Finals with the Colorado Avalanche. He’s right-handed, 6’3″, and will be 31-years-old when next season starts. He’s developed a reputation as a good defensive player, especially in Anaheim where he played before being traded this season, but has also shown the ability to put up points during this playoff run.
Manson would add that size to the right side that the Canucks are looking for. He would likely cost the team somewhere in the $3.5-$4.5 million range, a price that the organization might not want to pay considering his age and the team’s cap struggles.

A player that the Canucks have been interested in for a long time, Justin Schultz was born in Kelowna and could make his return to BC this summer. He played just under 17 minutes per game for the Capitals this season on the right side at a cap hit of $4 million. He had 23 points in 74 games, a far cry from the offensive production he managed a few years ago.
However, while his offensive production has declined, he’s become a more defensively responsible player. He’s posted a positive CF% relative to his teammates in each of the past three seasons, showing that his team controls more of the play than average while he’s on the ice at 5-on-5.
Schultz is not a long-term solution to any of the Canucks problems. However, he could be a nice stopgap while the team waits for a draft pick to develop over the next two seasons.

One of the more intriguing names in this weak class of free-agent defencemen is Colin Miller. The 29-year-old, right-handed Miller has been a steady contributor in Boston and Buffalo, posting great analytics in both places. Miller finished second among all Sabres’ defencemen in shot attempts allowed per sixty at 5-on-5, proving that he does a good job at suppressing offence.
Miller would be a steady presence to add to the blueline. One concern is that he has missed a lot of games during his career. Over the course of seven NHL seasons, he’s only topped the 65-game mark once, though that does include a COVID-shortened season.

If the Canucks are looking for something at a bit of a cheaper price point, one of these three players might be a good choice.

A former first-round pick, Olli Määttä has now bounced around a few teams during the last couple of seasons. Last season he played in Los Angeles and managed 8 points in 66 games. Prior to that, he played for the Chicago Blackhawks and the Pittsburgh Penguins, winning a Stanley Cup.
He would slot in as a third-pairing, depth defenceman for the Canucks. As a left-handed player, Määttä would fit best if Ekman-Larsson slid over to the right side to pair with Hughes. This would then open a position for Määttä to play in a third-pairing role and offer the coaching staff a bigger body.

A midseason acquisition of the Toronto Maple Leafs, there is a chance that he decides to re-sign in Ontario. However, if he does make it to free agency, this is a player that would suit the Canucks’ needs well. Lyubushkin is a one-sided player boasting strong defensive play while being a black-hole offensively.
With so many smart, talented, offensively-inclined defencemen on the left side, like Hughes or Jack Rathbone, Lyubushkin could make the perfect partner. Still just 28 years old until the end of next season, the Russian could join fellow countrymen Vasili Podkolzin and Andrei Kuzmenko on the west coast.

Last but not least, Will Butcher is a left-handed defenceman that has a bit of a redundant skill set for the Canucks, but could be worth taking a cheap flyer on. After scoring 44 points in 81 games as a rookie, Butcher’s numbers have declined and he managed just 8 points in 37 games this past season. He continues to show flashes of brilliance but has struggled to put it together.
A change of sceneary could be exactly what the doctor ordered for Butcher. However, with Hughes and Rathbone already on the roster, there won’t be much room for Butcher if everyone is healthy.

Which of these defencemen would you most like to see the Canucks pursue this offseason?
More from CanucksArmy:
Uncategorized
Recent articles from Noah Strang