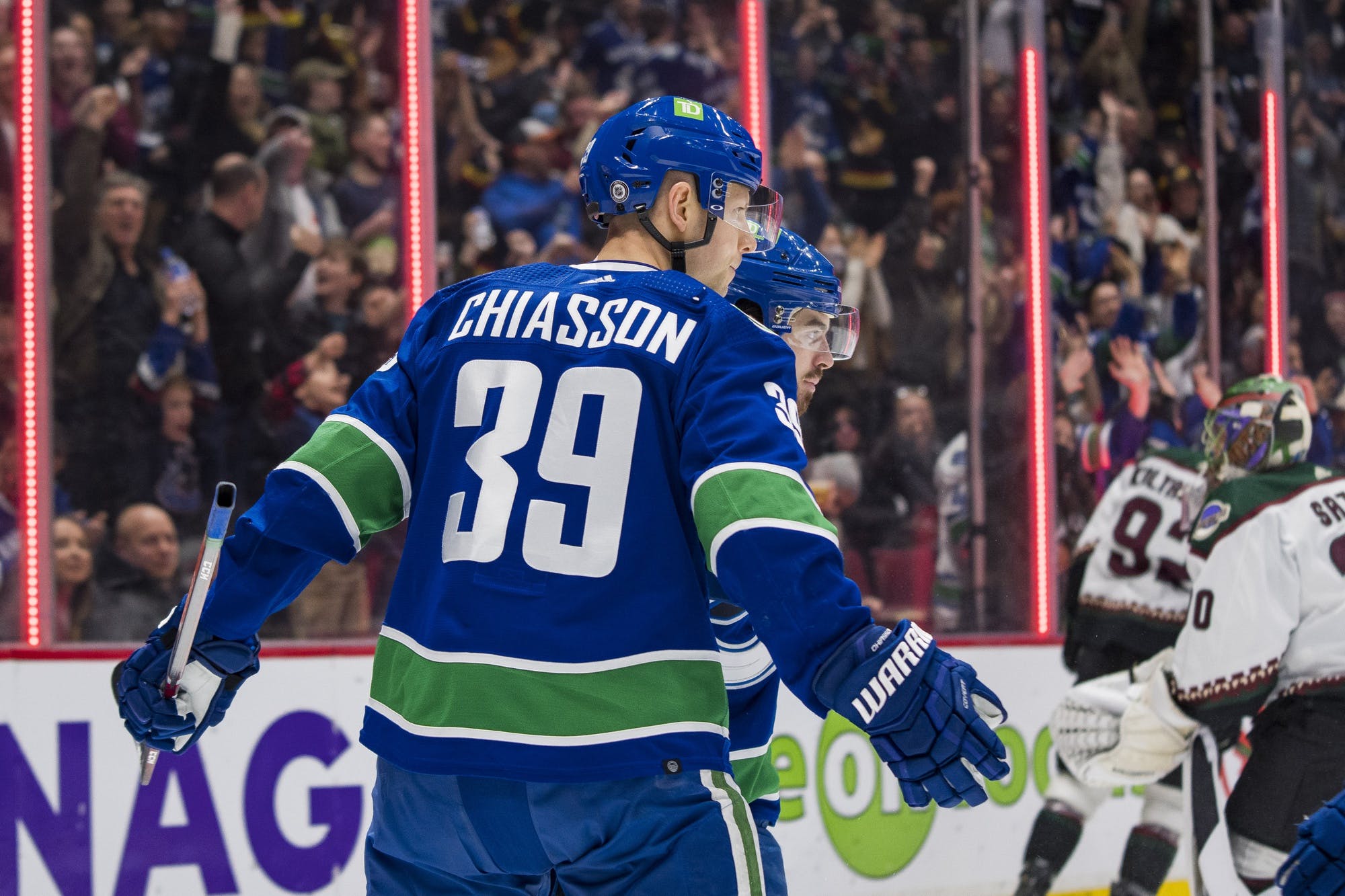 Photo credit: © Bob Frid-USA TODAY Sports
By Michael Liu
6 months ago
Comments
Alex Chiasson arrived at training camp with a PTO and left with a league minimum contract for one year. It was thought of as a depth signing, though the 31-year-old was definitely not expected to push Zack MacEwen onto waivers. But as the season began, things just seemed to get weirder and weirder.
It also included a jersey fail in his second game with the club.

The veteran was brought in to shore up the team’s depth but found himself thrust into a bigger role than many first thought. Travis Green was trying him on the first powerplay unit as a net-front presence, a role he took on in Edmonton the seasons before. It allowed Chiasson to really pump his point totals up, with 10 out of his 22 points coming on the man advantage. Realistically though, Chiasson should be nowhere near the powerplay.
By no means was Chiasson awful. However, he also couldn’t be called… excellent. Not much was expected of him and honestly, the winger delivered as much. Through the first 6 months of the season, Chiasson had 12 points. That’s 56 games during that span.
Advertisement
Ad
Advertisement
Ad
There’s not much upside to speak of when digging deeper into the advanced stats. Chiasson’s shooting percentage this year was 13.3%, around par for his career. That also came with incredibly favourable deployment, with 62.1% offensive zone starts. It shouldn’t come as any surprise that Chiasson’s possession numbers were good because, well, they should’ve been with how he was used.
Defensively, Chiasson was alright. There were moments where he would get lost on his assignments, leading to a goal against and making his defenders look pretty bad. However, Chiasson also managed to use his body well, forcing attackers wide or playing the man to take him out of the play. It was about a break-even impact, with an expected +/- of -0.5.
The thing is that Chiasson wasn’t just a bottom 6 staple. He found himself in the top 6 for extended periods of time, on a line with JT Miller, Bo Horvat, or Elias Pettersson at any given moment. It wasn’t all bad, especially in April. For some odd reason, playing with Petey unlocked the Boston University edition of Chiasson.
Advertisement
Ad
Advertisement
Ad

Welcome to the Elias Pettersson and Alex Chiasson Show. 🧪 pic.twitter.com/1yW3wyt5G3

Yes, the veteran clicked in the final month of the regular season, going on a tear to end the year. Chiasson tallied 6 goals and 4 assists in his best stretch of Canucks hockey and really found his place beside Pettersson.
There’s no questioning the effort that Chiasson brought to each and every shift. A bottom 6 veteran presence like him sets the tone for the flow of a game, and he was able to step up even when the annual injury bug plagued the Canucks.

Every Canucks desperately trying to push the puck out over the blue line, what an effort by Alex Chiasson to finally move it out. #Canucks pic.twitter.com/ff1R6NuJRc

With his contract up, there were rumours early in the offseason that Chiasson would be heading over to Europe. That has since been refuted by his agent, saying via text, “It is his first intention to resign with Vancouver if there is reciprocal interest… or failing that continue his career with another NHL team.”
Advertisement
Ad
Advertisement
Ad
So do the Canucks resign Chiasson? While his last month may have tinted the glasses a bit rosy, it’s important to look at the whole season when making a decision. Honestly, it’s not terrible business to bring the winger back for another go-around. He’s had a season with the team and has been versatile and dependable when called upon.
And hey, he outperformed MacEwen and Jonah Gadjovich, two young players he beat out. Chiasson’s 22 points come solidly ahead of MacEwen’s 9 and Gadjovich’s 3.
However, the biggest sticking point would be nailing down his role. On a contending team, Chiasson should be a fourth-liner. If the Canucks are looking to be a better team next year, they can’t have players like him flirting with time in the top 6. Don’t get me wrong, Chiasson is a great bottom 6 forward. The problems arise when he’s playing alongside the big guns.
Advertisement
Ad
Advertisement
Ad
Ideally, Vancouver brings him back as a depth piece, one where he’s either in the bottom 6 or rotating in. Fans would probably like to see the Canucks bring in some younger options on cheap contracts, where there’s potential for offensive development down the road instead of Chiasson.
There’s nothing wrong with bringing Chiasson back after the season he’s had in Vancouver. He ended up in a weird spot and achieved a measure of success when thrust into a bigger role. Coming back on another league minimum contract might just be in the cards as management looks to shore up this roster.
More from CanucksArmy: