Advertisement
Ad
After being a scoring machine in the AHL last season, Jonah Gadjovich is ready to break through as an NHLer this season 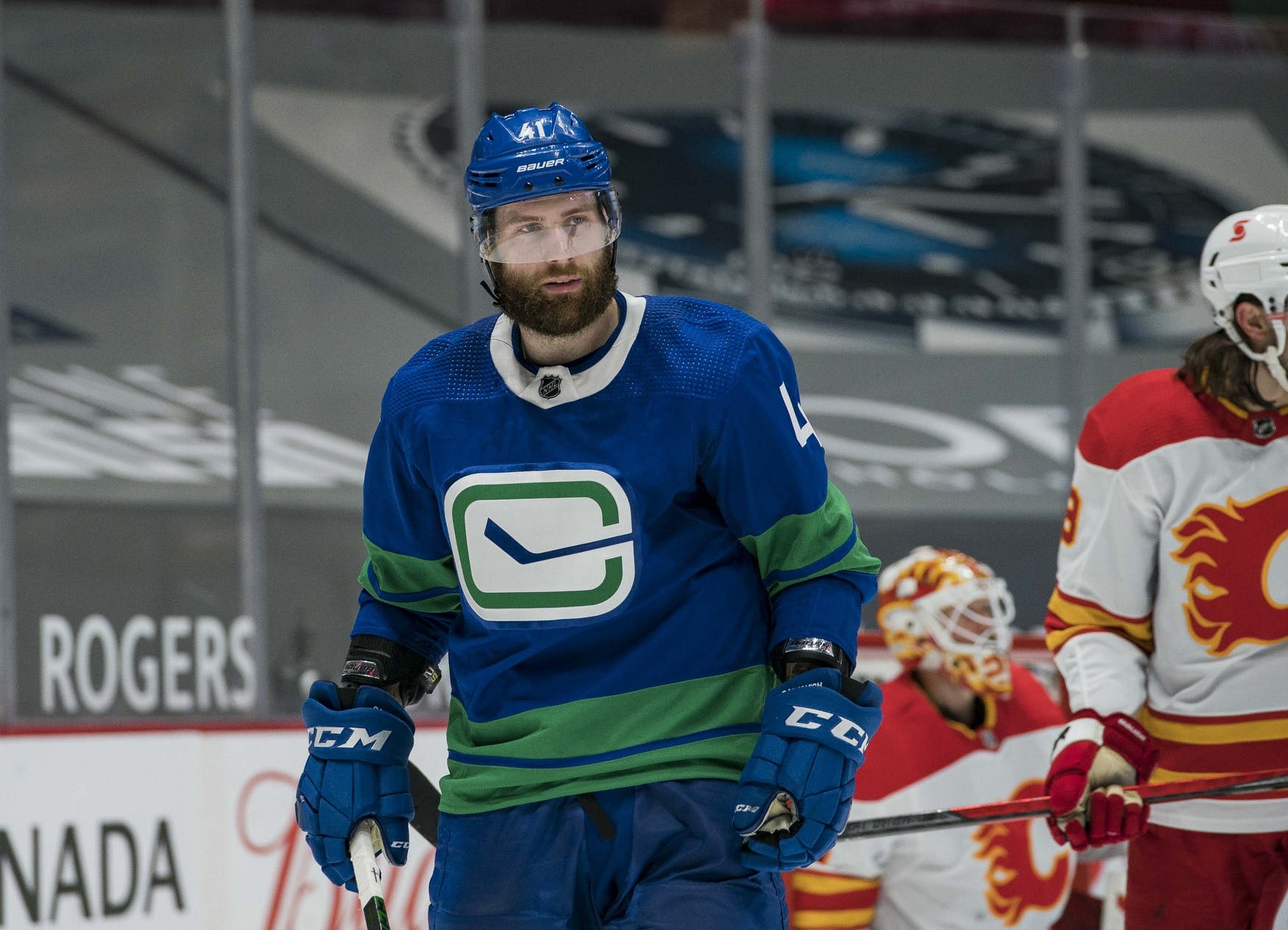 Last season couldn’t have gone much better for Jonah Gadjovich in the AHL.

The Vancouver Canucks’ 55th overall selection in the 2017 draft got a taste of the NHL and wants that to be where he plays next season.

I caught up with Gadjovich as he was (surprise, surprise) leaving a workout. The 22-year-old power forward has been spending his offseason working with Bryan Marshall, the Canucks’ Director of Applied Sports Science. This is the third offseason in a row where Gadjovich has spent time with Marshall and he has helped Gadjovich move on from the injury-ridden past that hurt him in his final season in the OHL and first year as a pro.

This offseason has a much different feel to it than last year. Gadjovich has a plan. He has a great team around him for his workouts and he is consistently on the ice three to four times a week while being in the gym every day with a day off mixed in every couple of weeks. There’s a reason why he looks so strong around the crease or on the boards and that’s because he is an absolute monster in the gym.

“Last offseason was like eight or 10 months or something ridiculous like that so, obviously this offseason feels much more normal,” said Gadjovich. “I’ve been training hard for three months now and am excited that camp is approaching. It’s really good. It’s been a great summer for my development.”

This summer saw Gadjovich get married just one day after COVID-19 restrictions moved to stage three in Ontario.

“We found out about six days before the wedding that Ontario was going to be opening up a bit, so, as soon as we saw that, we were just calling and texting all the people that couldn’t get the original invite and we got to add about 40-50 more friends and family at the last minute. It ended up being an awesome day for our family.”

Another interesting tidbit about Gadjovich’s family is that his brother-in-law, Spencer Martin, was traded to the Canucks to help bolster the goaltending depth of the organization and will likely get games in with the Abbotsford Canucks.

“Man… It was pretty wild,” said Gadjovich. “We were camping, my wife, her family and I, we were up in northern Ontario, and we’re sitting at the picnic table and his phone starts ringing. It was the Lightning GM or assistant GM and he runs around the corner to take the call and we’re like ‘okay, what’s going on?’ Then, he comes back around the corner a few minutes later just freaking out, he’s like ‘I got traded to Vancouver!’ and we just started going crazy. It was pretty funny because the weather was brutal. It was pouring rain on us for two days and we didn’t care, we were all in the best spirits just because of that trade. It didn’t matter what the weather was like or how cold and wet we were, it was just so exciting that we’re going to be in the same organization, pretty special.”

Moving into the summer, Gadjovich learned a lot from a challenging year. He scored 15 goals in 19 AHL games last season with the Utica Comets and believes that this is his time to break through and becomes a true NHL calibre player.

“I mean that’s what I’m planning for,” said Gadjovich. “I think that I’ve shown every year that I’ve improved my game and I’m hoping to continue to do the same. I’m working my butt off this summer, I’m doing everything I can so that I can be a full-time NHL player. That’s my goal coming into the year and I think that I can make that happen. I’m super pumped for camp and can’t wait to get out there. I got a little taste of what the NHL was like at the end of the season. I got to travel with the team and have some practices, I obviously got a game in and it was incredible. That’s where I want to be. I want to be a full-time NHLer this coming year and I know that it’s going to be super tough but I want to make the team out of camp. That’s been my goal ever since the end of the last season.”

It is going to be a tough road to the NHL with the number of players who were brought in to provide depth but we should not forget about Gadjovich’s ridiculous scoring touch at the AHL level last season nor should we write him off after one NHL game. I mentioned that not a lot of Canucks fans are talking about him on social media and he said, “I’m fine with that, I’m okay flying under the radar up until camp.”

One thing that won’t fly under the radar is Gadjovich’s play. He’s big, physical, tough and has great hands around the net to finish on loose pucks. It’s still likely a long-shot that Gadjovich makes the (Vancouver) Canucks out of camp as there has been a lot added to the forward group. If sent to Abbotsford, he is excited to know that he is just down the road and if he is scoring 15 goals in 19 games, the decision-makers will be very aware of it compared to being across the continent in Utica.

“Being right there in Abbotsford, I think that maybe they’ll be able to keep an eye on the team a little bit better,” said Gadjovich. “Management and coaches [from Vancouver] can watch more games or see things that maybe were difficult to see from across the continent. If I end up going to Abbotsford, my goal is to get right back to Vancouver. I’m hoping to pick up where I left off last season. I just felt great last year, I thought I was playing the style of game that I needed to play to have success and for me now it’s just about tweaking a few things and then keep improving and getting better at those things every day. That’s kind of been my goal from day one. I’m not going to stop improving now.”

Even though he only got into one game last season, the time practicing and travelling with the NHL team made a huge impact on Gadjovich’s drive to improve which is already at a high level.

“Just being around the NHL guys during the morning skates, practices and obviously the games, the intensity that they practice at when they’re on the ice, it’s just different,” said Gadjovich. “So, that’s kind of been my goal, whenever I’m on the ice, whenever I’m in the gym, I’m doing everything to the best of my ability and really working my butt off. I know now that if I’m making a pass in the NHL it has to not just be accurate; it has to be hard, it has to be on the tape and sometimes in summer skates, you’re kind of just throwing it up the ice to a player because it doesn’t really matter.”

“That’s not been my mentality this offseason, I’m trying to execute every second of offseason practices like I would if Travis Green was watching at a pregame skate deciding if I was going to be in the lineup or not. So that’s how I’ve approached this summer and I’m hoping to roll into Vancouver and earn a spot out of camp.”

It’s clear that the taste of the NHL is motivating Gadjovich. He knows how tough it is going to be to make the NHL team out of camp. If he is sent down to Abbotsford, he will be used in a top-six role with plenty of power play time. His skating was a weakness that many noticed last year and Gadjovich is well-aware of this being a knock on his game. It’s something he has keyed in on this offseason and he is ready to prove the doubters wrong.

His combination of being a big physical presence while also having good hands in tight to bury dirty goals make him an exciting potential bottom-six player for the Canucks and Gadjovich knows what role the Canucks want to use him in.

He will have to affect every shift with his physical play and score goals when the chances present themselves.

“I wish I could have played more and contributed more for the NHL team, but that’s just the way it goes sometimes. In my second NHL game, when I get another one, I’m sure I’m going to be just as excited as my first one. So, yeah, for me, my mentality is one more game, one more game, one more game and just keep proving that I’m ready but also always earning every next game.”