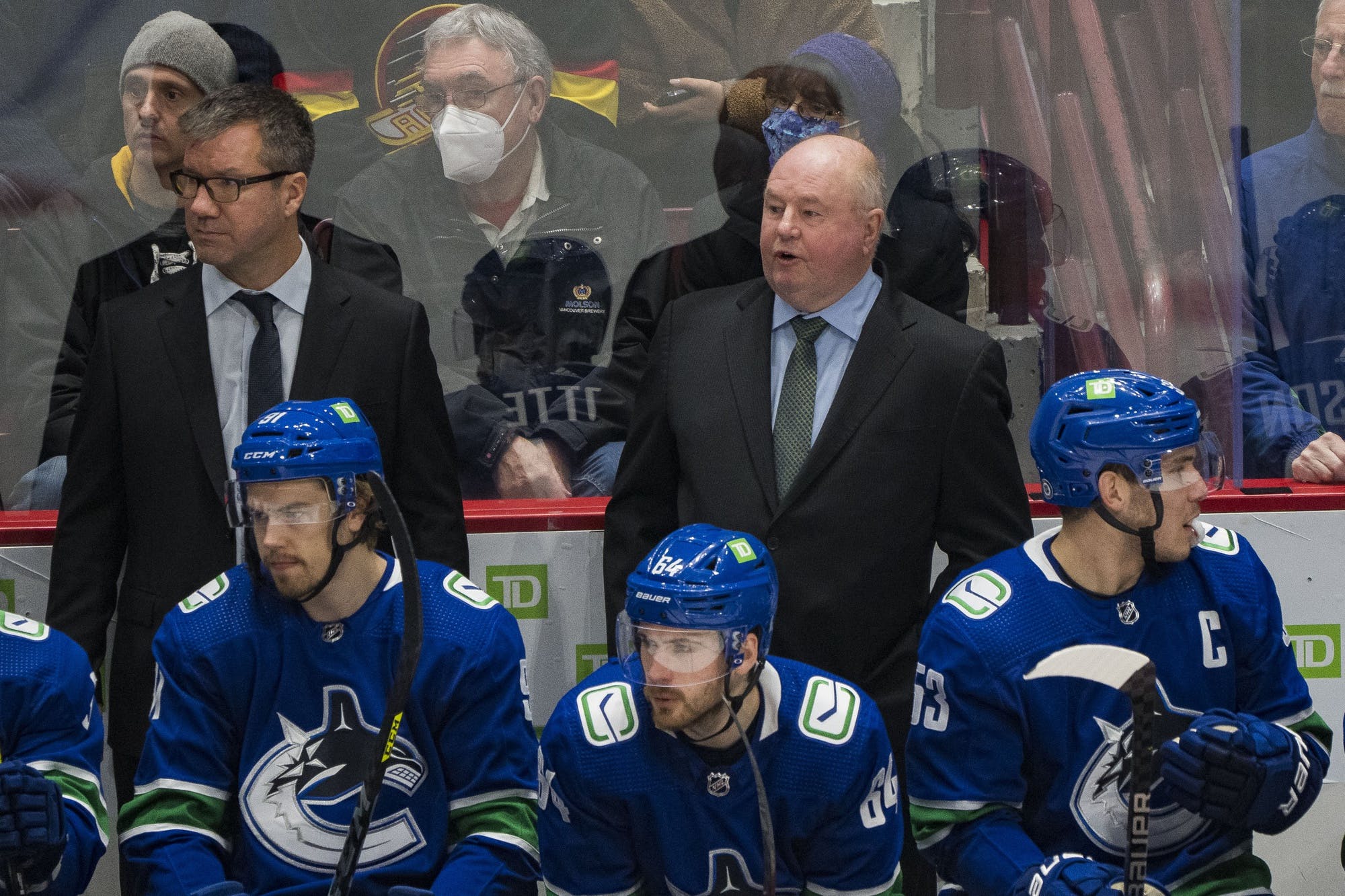 Photo credit: © Bob Frid-USA TODAY Sports
By Stephan Roget
1 year ago
Comments
Do not be alarmed, and do not adjust your internet browser. What are you are experiencing right now is mental phenomenon known as cognitive dissonance, and it’s completely understandable, given the circumstances.
Mere days ago, you were dead certain that the Vancouver Canucks’ 2021/22 season was a total write-off. With the team a third of the way into the season and way down at the bottom of the Pacific Division, it was a reasonable belief.
Now, you’re not so sure. Mass dismissals have occurred, and while we don’t yet know who will be helming the front office in the long-term, we do know that Bruce Boudreau will be taking over as head coach.
Yet, is that really reason enough to hope again? To start checking the standings? To start budgeting for playoff tickets?
Maybe. Maybe not.
Boudreau is, after all, just one man. But what a man! And what a perfect fit for the bizarre and unfortunate — but not yet unsalvageable — situation that the Canucks now find themselves in.
Advertisement
Ad
Advertisement
Ad
No matter what, it’s going to be an uphill climb, and an uphill climb with a countdown, at that.
But should you choose the path of optimism — if you choose to believe — below you will find nine compelling reasons why Boudreau might just be able to turn this ship around in the nine weeks left before the 2022 Olympic Break.
And isn’t it nice to believe in something?

First and foremost on this list is the fact that Boudreau has been in a situation like this before. Back in 2007, Boudreau was promoted from the AHL’s Hershey Bears to the Washington Capitals for his first NHL coaching gig.
At the time, the Capitals were sporting a 6-14-1 record under Glen Hanlon, and drastically underperforming most preseason expectations.
Under Boudreau, the Capitals turned it all the way around, going 37-17-7 and bursting back into the playoff picture.
Boudreau was awarded with the Jack Adams Award for his efforts.
Advertisement
Ad
Advertisement
Ad
He would go on to be let go by the Capitals a quarter of the way through the 2011/12 season, and then picked up immediately afterward by the Anaheim Ducks.
When he joined them, the Ducks were 7-13-4. Under Boudreau, they went 27-23-8 to close out the season. Anaheim still missed the playoffs by 15 points, but they bounced back all the same.
The next year, the Ducks won the Pacific.
Boudreau joined the Minnesota Wild at the outset of the 2016/17 season. The previous season, the Wild had squeaked into the playoffs with a respectable 38-33-11 record. In their first season under Boudreau, the Wild upped it to 49-25-8, good enough for second in the Western Conference.
In other words, when Boudreau arrives, teams tend to improve their records — no matter how shoddy they were before he showed up.
Advertisement
Ad
Advertisement
Ad

If one were asked to describe the Canucks’ 2021/22 offensive output, they would probably start with “impotent” and only get crueler from there.
The numbers don’t lie. As of this writing, the Canucks rank 6th worst in the league with a paltry 2.32 goals per game.
Boudreau has never coached a team that has scored fewer than 2.50 goals per game, and about a third of the teams he’s coached — including three of his four last Minnesota Wild squad — have scored at a rate over and above 3.00 goals per game.
More than that, however, Boudreau has a reputation as an “offence-first” coach, and that’s music to the ears of a fanbase that has watched the Canucks struggle to put up any offence — never mind consistent and systemic offence — over the past two calendar years.
Advertisement
Ad
Advertisement
Ad
Heading into the season, the Canucks were clearly built to be a front-loaded team, with one of the best top-sixes on paper in the entire NHL.
Boudreau is the kind of coach who can really work with that.

With full credit going to @LeafRollin on Twitter for pointing this out, the Washington blueline that Boudreau inherited when he first made it to the NHL — the same blueline he’d eventually lead into the playoffs — consisted of Mike Green, Tom Poti, John Erskine, Jeff Schultz, Brian Pothier, Shaone Morrison, and Milan Jurcina.
If you don’t recognize a lot of those names, don’t worry. That’s kind of the point.
While Boudreau’s offensive instincts are obviously at the forefront of his game-planning, he’s got an underrated reputation for coaching defensively-sound teams, too — no matter how his bluelines are constructed.
Advertisement
Ad
Advertisement
Ad
Without a doubt, this will be his greatest challenge in Vancouver. He can wake up the offence and motivate his players all the live-long day, but he can’t do much about a defence corps that was poorly-constructed from the outset. Turning the current blueline — which has arguably overperformed to this point in 2021/22 — into a consistent success will be a true testament to the strength of Boudreau’s system.
Or, you know, not.

#4: He’s All But Guaranteed To Improve The Special Teams

#5: SO Many Players Were Underperforming For Travis Green

When one player is having a bad season, it can usually be blamed on that individual. When the whole team is having bad seasons, it’s probably something to do with the coach.
Just looking at raw, point-per-game production, the following Canucks were performing at below their career average for Travis Green thus far in 2021/22:
Bo Horvat, Elias Pettersson, Brock Boeser, Tanner Pearson, Oliver Ekman-Larsson, Tyler Myers, Jason Dickinson, Alex Chiasson, Travis Hamonic, and even Juho Lammikko.
Advertisement
Ad
Advertisement
Ad
Speaking in the past tense, that was a lot of early-season disappointment.
Speaking in the present tense, that’s an awful lot of untapped offensive potential waiting to be unleashed.
And speaking in the future tense, if anyone’s going to unlock that potential, it’s going to be Boudreau.

If Boudreau were hired sometime before the 2021 offseason, there may have been some room for debate as to whether or not a “win now” coach like him was appropriate.
In this very moment, however, it’s a moot point.
Benning was all-in on the 2021/22 season. He dealt the 9th overall pick for Oliver Ekman-Larsson, Conor Garland, and Arthur Capspace. He signed multiple free agents. He traded for Jason Dickinson.
Benning may be gone, but the Canucks are still all-in.
To pull the chute now and start a re-tool on the fly would be counter-productive and inefficient. The club doesn’t have many tradeable assets that would bring back significant futures-based returns. There are no notable UFAs to rent out.
Advertisement
Ad
Advertisement
Ad
Clearly, this roster was built with the 2022 postseason in mind, as wrongheaded as that might have been.
The most sensible thing to do in the wake of Benning and Green’s dismissal was to find another coach who might be able to salvage the Canucks’ playoff hopes. And that’s exactly what they’ve found in Boudreau.
A longer-term vision can wait until the summer of 2022, at least.

#7: Boudreau Has Never Finished A Season Below .500

As of this writing, the Canucks are holding down a perfectly rotational .360 point-percentage.
That’s bad.
But it’s not likely to continue under Boudreau.
In his 13 seasons as an NHL head coach, Boudreau has never finished a season with a record below .500.
His highest ever was .738 with the 2009/10 Capitals. His lowest ever was .506 with the 2018/19 Wild.
Getting the 2021/22 Canucks back up to .500 hockey will  be an almighty challenge for Boudreau and staff — they’re about seven straight wins back of that right now.
Advertisement
Ad
Advertisement
Ad
But staying above .500 from here on out?
That’s a historical guarantee.

#8: He’ll Have A Positive Impact On Elias Pettersson And Brock Boeser, Regardless Of Team Success

Earlier in the season, this author opined that it might be time to make a coaching change just for the sake of a coaching change. More specifically, the argument went that having the likes of Pettersson and Boeser only ever learn from a single head coach through their entire developmental phase might not be the best strategy.
A month later, it’s all the more clear how true that was.
Pettersson and Boeser, meant to be the top-two of the Canucks’ top-six, are each mired in the midst of some dreadful offensive production. They both look lost out there, and in desperate need of some reinvigoration.
Well, here comes Coach Boudreau to save the day. As we stated before, he’s well-known for his utility belt full of o-zone tips and tricks — and, surely, he’s got something to teach Pettersson, Boeser, and all the rest of the Canucks’ struggling forwards, too.
Advertisement
Ad
Advertisement
Ad
Superstars like Alex Ovechkin, Niklas Backstrom, and Ryan Getzlaf put up some of the best numbers of their careers under Boudreau. He practically resurrected Eric Staal’s career in Minnesota. Heck, Boudreau even turned Jason freakin’ Zucker into a 30-goal scorer one year.
Again, if we’re talking an absolute worst-case scenario here, you’ve still got Boudreau coming in and giving Pettersson and Boeser some additional offensive versatility. Even without much team success, the both of them — and presumably several other players along the way — are better off for having learned under him.
And the notion of Pettersson and Boeser, refreshed, reinvigorated, and now even more multi-talented? That’s something that’s going to matter in the long-term, no matter the immediate context.

If there’s one thing the Canucks need right now, it’s positivity. The last few years have not been easy on the players or the fans, and though much of the reasonable negativity has been abated by the widespread organizational changes, there’s still a real need for some “feel good” content to turn it around.
Advertisement
Ad
Advertisement
Ad
In a year when Vancouver fans have hear about how undesirable their market is from such luminaries as Brad Marchand, Anson Carter, and Kevin Epp, Boudreau is practically gushing at the prospect of coaching in Canada.

"I think it's a great opportunity, I've been dying to get back. I thought this is perfect, I've always wanted to coach in Canada."

🗣️ Bruce Boudreau on this opportunity with the Canucks pic.twitter.com/o86qywSHOi

But it’s not just his home country that has Boudreau excited.

Here is what new #Canucks Head Coach Bruce Boudreau said when I asked him what excites him the most about coaching this team, moments ago on @Sportsnet650 pic.twitter.com/jcMTpRtEDG

He spoke in detail about why he’s so enthusiastic to be named coach of the Canucks, and his list started with the players themselves — and, in particular, the young core that once had the Vancouver fanbase similarly stoked.
Boudreau isn’t just what the Canucks need right now. He’s what the whole damn province needs right now.
And he can’t wait to get started.