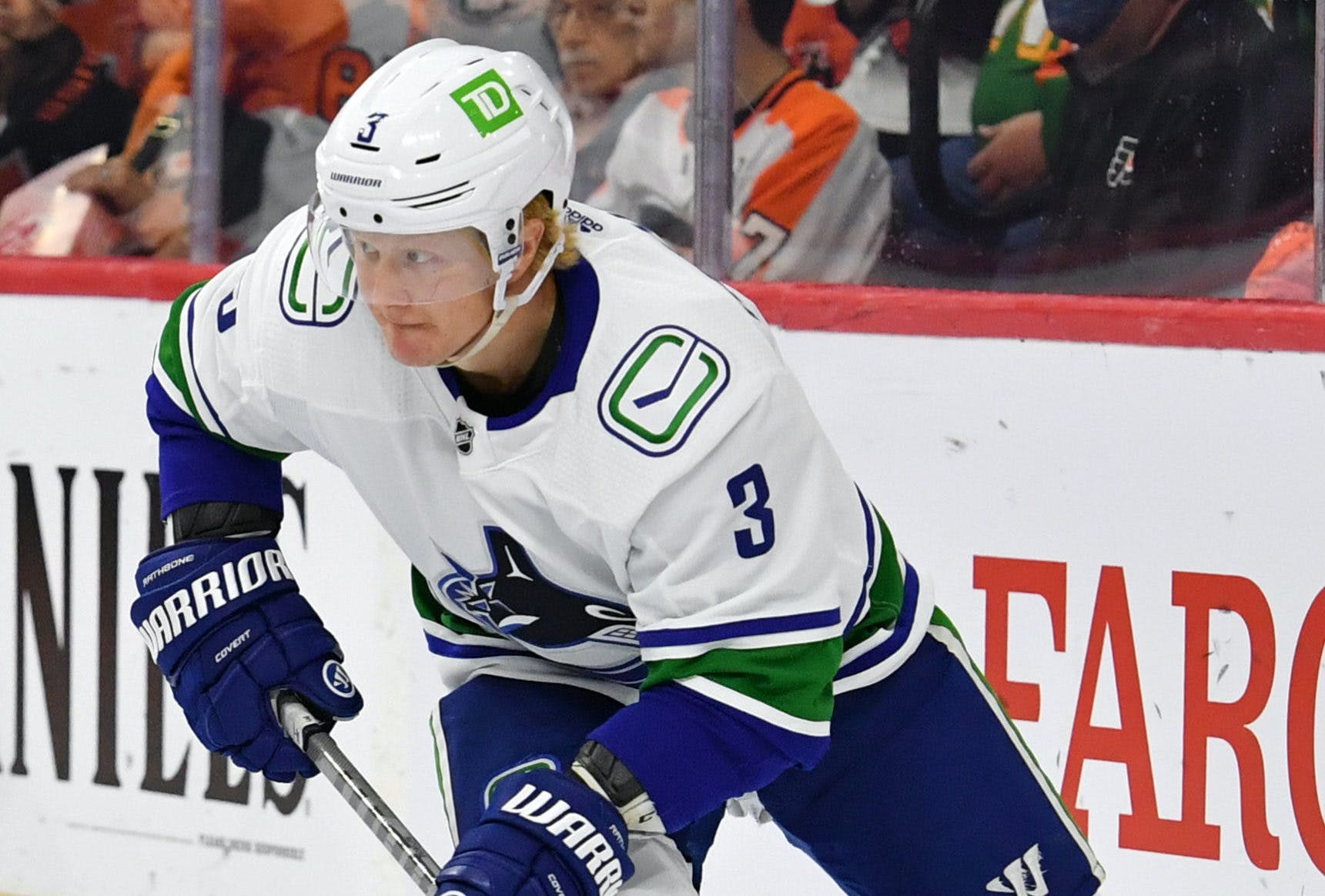 Photo credit: Eric Hartline-USA TODAY Sports
By Faber
2 months ago
Comments
21-year-old Vasily Podkolzin and 23-year-old Jack Rathbone were both assigned to the AHL on Monday evening.
It’s a move that will certainly lead to them logging more ice time than they were receiving with the NHL team.
“Young guys need to play,” said head coach Bruce Boudreau when he met with the media on Tuesday morning. “I mean, that’s the biggest thing. We love both of those guys, but right now when we’re playing fairly well, it’s no good for Podz or Rathbone to sit in the stands.”
“In Washington when we had really good young players, they had to play and they developed to the point where they became the Capitals for 15 years,” said Boudreau. “That’s what we’re looking at, Podz is going to be an NHL player for a long time and he’s going to be back, and so is Jack. If we’ve got enough guys, and they’re not playing, let’s get them some ice time and get their confidence back up.”
Advertisement
Ad
Advertisement
Ad
Confidence was high for both Podkolzin and Rathbone going into the 2022-23 season.
Podkolzin was touted as one of the top candidates to have a breakout season and Rathbone was being called an NHL player by management in the summer.
21 games into the season, neither of those predictions has come true.
Rathbone has struggled to find his way into the lineup and when he has been pencilled in to play, he hasn’t shown the offensive flash that he demonstrated in Abbotsford last year. Rathbone has only played in six NHL games this season and is long overdue to get back to the NHL to simply play games.

The goal that punched our ticket to the playoffs ✅

As for Podkolzin, he has played in 16 games over the year but hasn’t seen game action in over a week and with the team on a winning streak and the AHL team just down the snowy highway, moving him to the AHL is the right call at the moment.
Advertisement
Ad
Advertisement
Ad
“For Podz, his confidence was probably at a little bit of a low ebb there,” said Boudreau. “I think going down there (to the AHL) and playing all situations, I think will really help him.”
Podkolzin’s assignment to the AHL is definitely a new scenario for the youngster, as he played the entire regular season in the NHL last year before being sent to the AHL at the end of the year to participate in the AHL playoffs.
Abbotsford head coach Jeremy Colliton is surely going to be excited to add both of these players to his lineup, but more specifically, being able to use Podkolzin for 20+ minutes a night and use him in on both special teams units and as a top-six forward.
Sending Podkolzin down to the AHL also presents an interesting opportunity if the Canucks want to test their most interesting prospect.
Advertisement
Ad
Advertisement
Ad
Danila Klimovich has not had a great start to his sophomore season, it’s actually something that he and Podkolzin have in common. My thought over the next week is to give Klimovich a bone and play him in the top six alongside Podkolzin.
As reported by Rick Dhaliwal on Donnie & Dhali, Klimovich’s agent Dan Milstein is in town to chat with the Abbotsford Canucks and though he hasn’t necessarily earned top-six minutes with Abbotsford, Klimovich playing with and learning from Podkolzin is a great opportunity.
It’s not likely that Podkolzin is going to be with the Abbotsford Canucks for a long time, so I like the idea of seeing if Podkolzin can help Klimovich be a more engaged player. Mental mistakes are a big problem that Klimovich has, and if Podkolzin has a major strength as a hockey player, his mental game is likely up there as his top trait.
Advertisement
Ad
Advertisement
Ad
In his 74 AHL games, Klimovich has lined up in the top six once.
He’s been used with bottom-six AHL linemates for all of his pro career here in North America.

Nice little sequence from Danila Klimovich on the power play. Fires a shot at the end that required a blocker side save from the goalie.#CanucksProspect pic.twitter.com/NwV9vWAbCP

What is the worst that could happen with playing the 19-year-old alongside the best man from his wedding in Vasily Podkolzin?
This situation presents an exciting challenge for Klimovich, and Podkolzin is a good life vest to keep Klimovich afloat in this sink-or-swim situation. On top of all this, Klimovich has 74 AHL games under his belt. It’s not like he’s in his first two weeks as an AHLer, he has to have a decent understanding of what it takes to be successful in the AHL but needs to be challenged.
I get that ice time should be earned but this is a rare situation where you can throw a test at a young prospect who hasn’t seen a lot of success in his young career. If he succeeds, it would do wonders for his confidence moving forward. If Klimovich were to fail in this challenge, it likely wouldn’t hurt him in the long haul as I don’t believe he will be picking up any more bad habits from watching Podkolzin play.
Advertisement
Ad
Advertisement
Ad
Podkolzin is a leader, and this stint in the AHL could come with the challenge of bringing out the best in Klimovich as well.

Danila Klimovich finds some space during a 2-on-1 and rips home his first GOAL of the season.#CanucksProspect pic.twitter.com/ygeNUG06bq

It’s not likely to happen in the end and Klimovich is likely going to find himself on the outside looking in with Podkolzin’s addition to the forward group. Klimovich has already been healthy scratched four times this season but with his agent in town to chat with Abbotsford about the development of his client, there is a chance we see this interesting outcome come to fruition.
I don’t think it can hurt either player and presents a fun challenge for both the Russian and Belarussian youngsters.
No matter the case, Podkolzin and Rathbone are going to get a ton of minutes in the AHL and the Abby Canucks have back-to-back games on Tuesday and Wednesday nights before back-to-backs on Saturday and Sunday.
Advertisement
Ad
Advertisement
Ad
We will be out in Abbotsford on Wednesday to take in the game and will bring more info and quotes from the game. Be sure to follow along on CanucksArmy for all the latest news about the AHL team.