Advertisement
Ad
Through the Boudreau fiasco and beyond, the Canucks have sunk below rock bottom 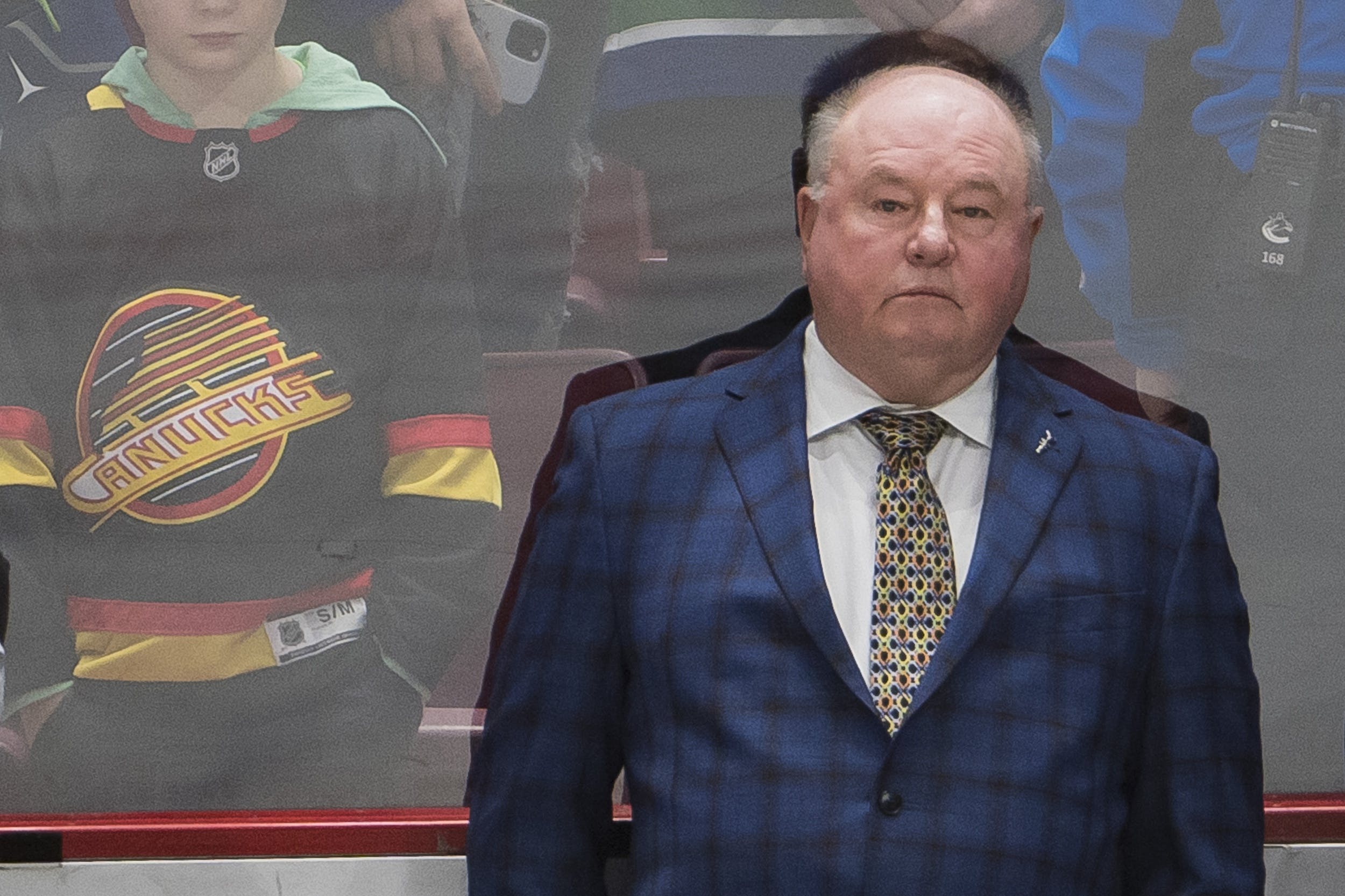 Photo credit: © Bob Frid-USA TODAY Sports
By Lachlan Irvine
12 days ago
Comments
As Bruce Boudreau took in the view at Rogers Arena last night for the final time as Canucks head coach, his gaze drifted to the fans across the rink at centre ice, each saying goodbye in their own way.
Hanging just above them is the arena scoreboard. It’s the same one that’s been in use since October 2006, and it’s clearly well past its expiry date.
Lately, it’s started to look a lot worse. The upper LED ring has been glitching all year, requiring the building’s ops people to restart whatever system operates those round video boards midgame to try and fix them.
But as The Province’s Patrick Johnston noted last week, the replacement parts for it are no longer in production. Fully repairing it is out of the question, which leaves them with just a couple of options.
The best decision they could probably make in this scenario would be to admit the two boards are broken, permanently turn off the system running them, and cover the rings with themed wrapping until the season ends. Then in the offseason, they’d be able to take it apart and rebuild a new scoreboard in its place.
Advertisement
Ad
Advertisement
Ad
Instead, the team has insisted on trying to keep using the broken panels like there’s nothing wrong with them. And every single game, what few fans remain are subjected to watching as the LEDs inevitably break down in front of them and the operators are forced to pull the plug again.
“Just try it again! Maybe it’ll work this time! Besides, who cares if a few people see?”
Perhaps there’s no better metaphor for the current state of the Vancouver Canucks than their own busted scoreboard.
How did we get here? How have the Canucks found multiple ways to hit rock bottom, each more embarrassing than the last?
We’re not even going to spend time rehashing the various ways the Canucks have been mentioned in a negative light over the past couple of years, but Cody Severtson did a good job of listing more than a few in last night’s Stanchies.
Advertisement
Ad
Advertisement
Ad
The way the Canucks organization dragged Bruce Boudreau through the most public and messy head coaching divorce in NHL history has given them a public black eye they won’t be able to recover from any time soon. It began with quotes from President of Hockey Operations Jim Rutherford sewering Boudreau’s coaching tactics early in the season.
Those quotes eventually escalated into a national news story on both sides of the border, headlined by a seemingly complete lack of empathy from Canucks ownership, led by Francesco Aquilini, or upper management, run by Rutherford and GM Patrik Allvin, for their own head coach.
And Canucks fans knew it. That’s why not even losing eight of the last ten games was enough to silence the ‘Bruce There It Is’ chants that engulfed the arena several times on Saturday night. The final set of chants as the horn sounded brought the 68-year-old coach to tears, in a moment so raw and emotional that you’d be forgiven for feeling like you were trespassing through a family’s private moment of grief.
Advertisement
Ad
Advertisement
Ad

Bruce Boudreau is brought to tears by the #Canucks crowd as they give him one last 'Bruce There It Is'.

In many ways, you weren’t supposed to see that. If Rutherford, Allvin and their staff had managed this situation properly, Boudreau would’ve been quietly let go weeks ago and an interim head coach would’ve taken his place until a permanent replacement could be found. No other NHL team seems to have trouble with this, so why should the Canucks?
Instead, they made every single wrong move possible, to a point where it eventually went from dumb decision-making to outright cruelty towards Boudreau. And in doing so, they created a whole lot of collateral damage for the players and fans to work through.
On Friday Tyler Myers spoke candidly about how the ongoing saga surrounding Boudreau’s future had made it hard for the players to concentrate on hockey. More and more Canucks fans have been electing to stay away from Rogers Arena out of apathy, and it came to head on Saturday when Oilers fans seemed to make up over half the building’s attendance figures.
Advertisement
Ad
Advertisement
Ad

The crowd is chanting 'Let's Go Oilers'. At a game in Vancouver. This is the state of the #Canucks right now. pic.twitter.com/N5wrdIcRLV

This whole situation has completely torpedoed whatever good reputation the Canucks still had left in NHL circles, and huge portions of the fanbase have taken to social media to voice how embarrassed they are to call themselves a supporter of the team. And that’s before getting into all of the bad decisions in hockey ops that led them to what they are now: a 27th-place team that refuses to admit they need a complete rebuild to ever have a shot at a playoff spot again.
As Boudreau says goodbye and Rick Tocchet enters the picture, the on-ice results will be a distant second priority in the eyes of the public. Because right now, the reputation of the Vancouver Canucks in hockey circles is that of the most dysfunctional, heartless, and mismanaged franchise in the National Hockey League. And until they recognize that for themselves, or someone else forces them to, there’s no telling how much lower this team can sink.
Advertisement
Ad
Advertisement
Ad
Bruce Boudreau will never get true justice for how the Canucks treated him all season. But that just makes it all the more important for Canucks fans to get theirs from the organization they pour their hard-earned money into. And hopefully, they’re able to get that in the near future.