Advertisement
Ad
The Statsies: Everything is pain for the Canucks right now 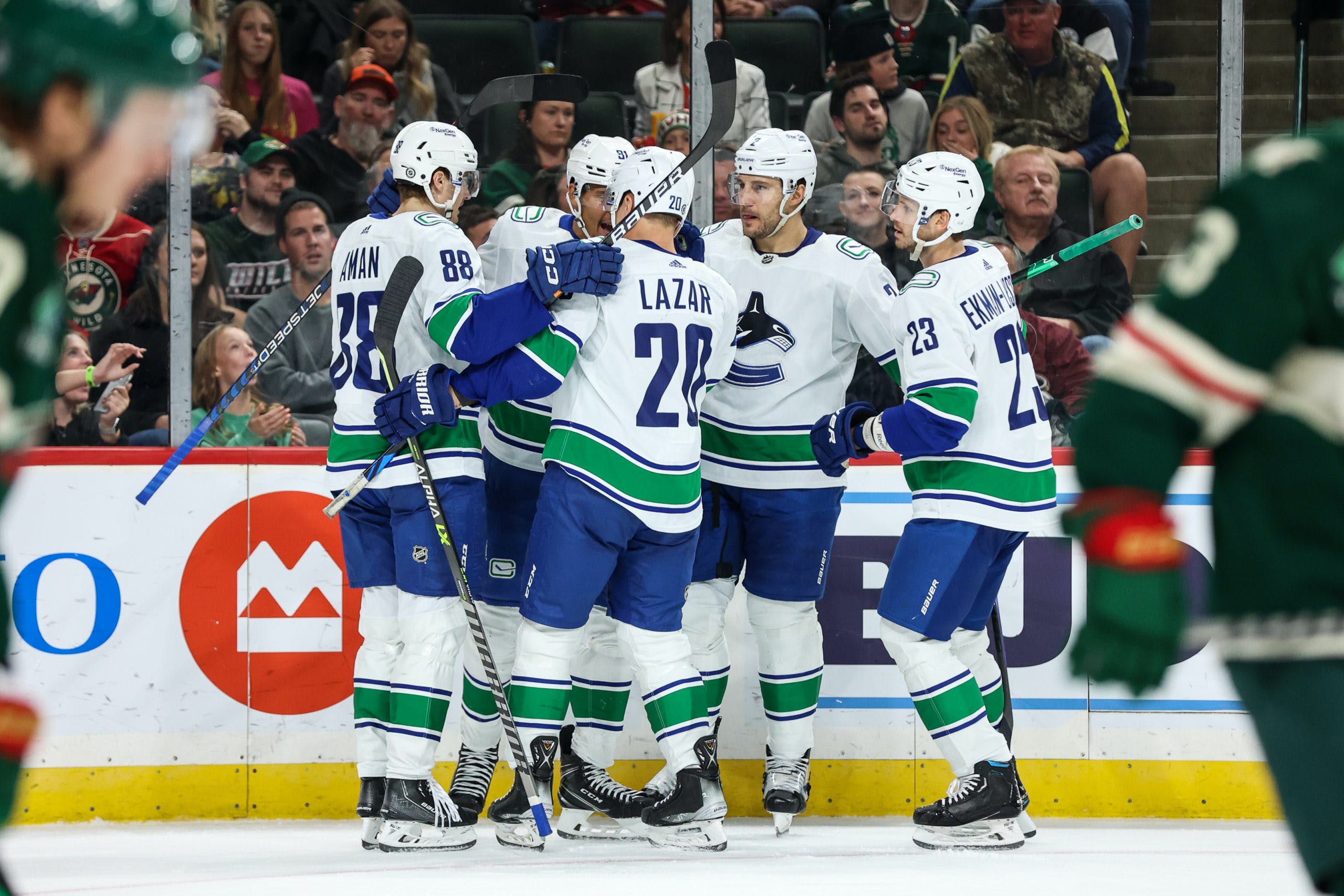 me coming back to the party after secretly throwing up pic.twitter.com/8ZSvkWj48E

The Canucks went up against a winless team for the second straight game. They gave that team their first win of the season for the second straight game. For the 5th straight game, they gave up a lead to lose. The Canucks are now the only winless team in the NHL. There’s really not much more to say, as Vancouver records a 4-3 OT loss to Minnesota.
Here’s what the numbers had to say about this result.
As always, you can find our glossary guide of advanced stats here.

From the outset, it looked like the Canucks were feeling the effects of a five-game road trip. The fatigue caught up as Minnesota came out of the gates fast in front of their home crowd. The entire first third of the opening frame was dominated by the Wild in xG and possession. However, the Canucks managed to battle back, chipping that advantage down after knotting the game up.
Advertisement
Ad
Advertisement
Ad
Potentially the most frustrating part of this team is that they are capable of playing well. Halfway through the second, Vancouver played another stretch of dominant hockey, seizing the initiative to take a lead into the third. But once again, the momentum stalled out, and in the end, it was the home team that secured their first win of the season. 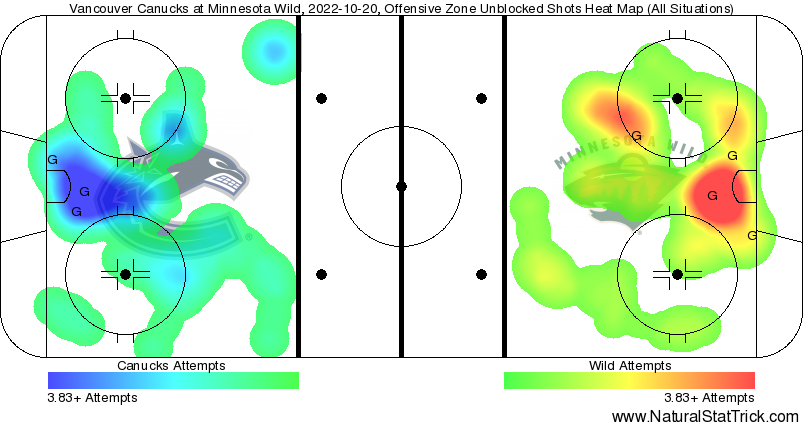 This heat map suggests a much better showing from Vancouver both offensively and defensively. They got that thick patch in the slot area, deep blue meaning that a high density of their shots came from one of the best areas to do so. The chances weren’t lacking for the Canucks, to say the least. In their own end, they managed to keep the Wild’s high-danger opportunities relatively limited. Of course, the majority of Minnesota’s shots also came from the slot, but theirs is lighter in comparison with the Canucks.
Advertisement
Ad
Advertisement
Ad

Corsi Champ: After two games out of the throne, Andrey Kuzmenko regains the crown as the Corsi champ of the Canucks. The chances have been there for the Russian forward, mainly because he’s able to retain puck possession so well. Finding himself back on a line with Pettersson, Kuzmenko posted a 73.33 CF% to easily lead his team. He also recorded 12 scoring chances with that CF% advantage, with 7 of them high-danger. In fact, Kuzmenko didn’t concede a single high-danger chance against during his 15:22 TOI.

Pettersson and Kuzmenko continue to be super fun together. Feels like they’re always dangerous.

A special shoutout goes to Luke Schenn on the Corsi front for this game. Usually, he’s one of the ones that gets absolutely shelled possession-wise, but against the Wild, Schenn was second on the team in CF% (66.67). Schenn led all defencemen with over 10 minutes played in scoring chances against (5) as well.
Advertisement
Ad
Advertisement
Ad

Corsi Chump: So much for a triumphant return. Tyler Myers earns this game’s Corsi chump with an abysmal 25.00 CF%. Giving up 36 Corsi against ended up giving him a -39.11 CF% rel to his teammates, something that doesn’t bode well when he’s playing 24 minutes per game. Myers was bottom of the team in xGF% (18.01), xGF% rel (-51.72), SCA (17) and HDCA (6). Essentially, the team was 1.5 times more likely to concede a goal when Myers was on ice. Multiply that over 24 minutes, and it’s not a pretty picture that it paints.
xGF: As for the player that led the way in terms of xGF, that would belong to Kuzmenko again. He’s clearly not been lacking in chances, and you gotta think that the points will come sooner rather than later. His 89.38 xGF% was 12 points clear of second place, putting his xGF% rel at 58.19. As for raw xGF, Quinn Hughes was able to record a 2.11 but was pulled down by an 1.3 xGA.
Advertisement
Ad
Advertisement
Ad
GSAx: Thatcher Demko is mortal. At least, so far into the season. It was yet another negative goals-saved above expected for the netminder as he conceded 4 goals on 37 shots. With Minnesota recording an expected goals of 3.04 through the game, that means that Demko posted a -0.96 GSAx. If there’s one promising thing so far, Demko has not conceded a goal on a low-danger shot. All four goals that beat him were mid or high-danger, meaning that though he’s looked average, Demko hasn’t let in any soft goals.

It's honestly hard to be too mad about this one. Mats Zuccarello with an elite deflection under Demko's arm on the power play to tie the game at 3 apiece. #Canucks pic.twitter.com/tM0NqAX4ua

Statsies reverse-jinx: Last recap out, I ragged on getting the fourth line replaced or switched out. Guess what, they were the best Canuck line statistically against the Wild. In their time together, Lazar-Åman-Joshua led all Canucks line at 5v5 adjusted in CF% (80.05), xGF% (82.41), SCF% (79.78), and HDCF (5.26). They were also a close second in xGF and xGA, suggesting the fourth line did more than what was asked of them in breaking even. Their positive impact on the game comes as a welcome surprise after the mixed reaction Bruce Boudreau got for scratching Nils Höglander. Both Åman and Joshua managed to record their first as Canucks in this game too.
Advertisement
Ad
Advertisement
Ad

The rookie making moves for his FIRST @NHL goal! pic.twitter.com/9wva1UKAeZ

JT Miller’s struggles: The $8 million dollar man is playing like an $8 dollar man. Okay, that’s probably an exaggeration, but JT Miller simply has not been very good. The game against Minnesota is a microcosm of that, where he was rock bottom at 5v5 adjusted play in CF% (31.84), and second-last amongst forwards in HDCF% (37.18). Miller struggled the most against Mats Zuccarello, Kirill Kaprizov, Calen Addison, and Ryan Hartman, conceding double-digits in Corsi-against whenever they were on ice at the same time. While this is understandable due to the talent of the opposition, it also leaves quite a lot of question marks as to his defensive capabilities against that calibre of opponents. Miller unfortunately shouldn’t be sheltered in his minutes, with all things considered.
Soft-match results: The Pearson-Horvat-Boeser line statistics don’t look pretty this time around. They were last in CF% (42.43), xGF% (12.33), and HDCF% (36.64). However, this should be taken into context as this line was matched up against Kaprizov-Hartman-Zuccarello. Playing against the opposing top line throughout the entire game, the advanced stats suddenly make sense as to why they didn’t perform as well as they probably should’ve. The matchup ended in one goal for and against, which isn’t the worst all things considered.
Advertisement
Ad
Advertisement
Ad

CF% – 48.28% HDCF% – 57.14% xGF% – 50.15%
Vancouver battled evenly for possession and had their grade-A opportunities throughout the game, but once again come up short for their first win of the season. Time is running out to turn this start around, as they head back home for their home opener on Saturday against the Sabres. What will it take for this team to win a game?
Stats provided by naturalstattrick.com