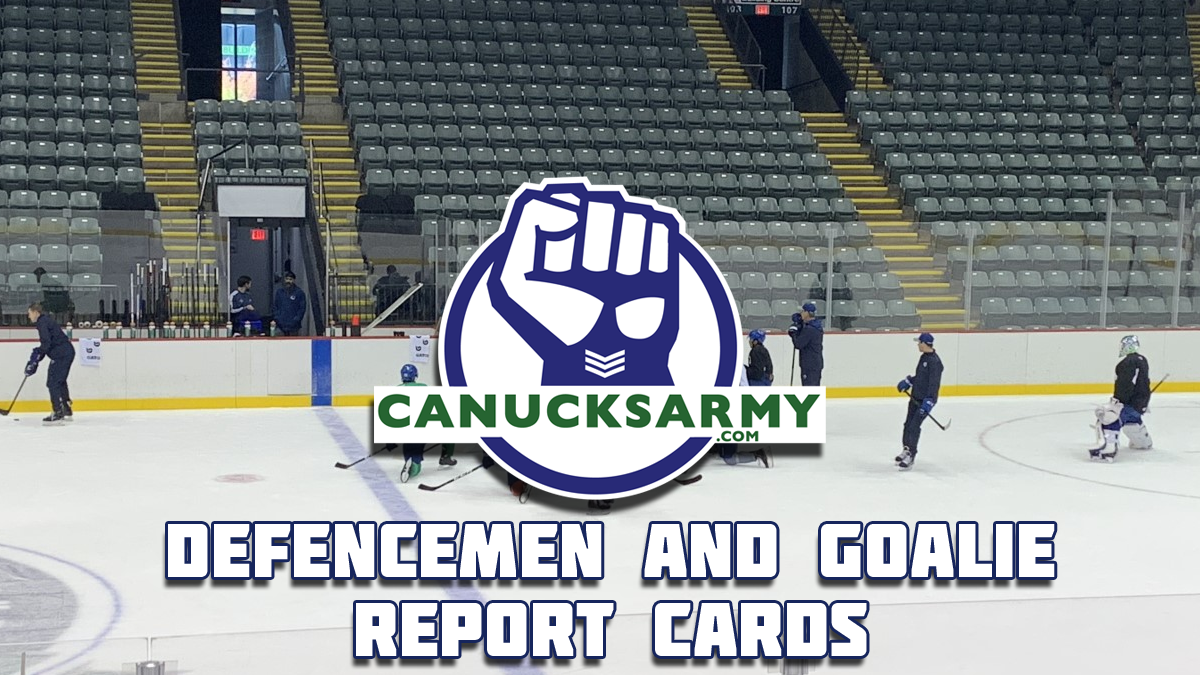 By Cody Severtson
4 months ago
Comments
With our defensive grades out of the way, let’s get to the section I know Managing Editor David Quadrelli scrolled to first for editing.
Abbotsford’s goaltending platoon was a bit of a rollercoaster for all involved. No goalie’s start looked remotely similar to how they finished. Michael DiPietro began the year as the odds-on favourite to wrestle away NHL backup duty from Jaroslav Halak. Arturs Silovs started the year expecting to be the de facto number two to DiPietro. Even though he finished the season having secured a two-year NHL contract extension, Spencer Martin’s season began with only two starts through the team’s first two months of play!

Michael DiPietro’s final year on his ELC couldn’t have gone worse. After wasting a season collecting cobwebs on Vancouver’s taxi squad in 2020-21, DiPietro entered training camp looking to somehow steal the NHL backup position from Jaroslav Halak. At camp, the fluid-moving DiPietro turned heads and convinced many that Halak would be gone before the deadline to make space for DiPietro.
Advertisement
Ad
Advertisement
Ad
Sadly, training camp would be the high point of DiPietro’s season for quite some time. DiPietro registered just two regulation wins through his first twelve starts and another via overtime. While his season rebounded after the new year, the memories of his stirring training camp performance were far in the rear-view mirror, and critics’ eyes turned towards the organization’s handling of DiPietro through the pandemic-shortened season as the reason for his struggles.
Ryan Johnson joined CHEKTV’s Donnie & Dhali and highlighted the positives of DiPietro’s adversity, “It was an important year for Mikey. He hasn’t faced a ton of adversity in his playing career — this year, to be pushed by two other very good goaltenders…created a very competitive environment. I’ve had some good talks with Mikey about his year and how I think this will make him a better player in the long run…he’s a mentally strong player as is, but this will only help his process and his ability to deal with adversity in the future”
Advertisement
Ad
Advertisement
Ad
DiPietro was instrumental in Abbotsford’s nine-game winning streak toward the end of the season, starting in six of the team’s nine wins while posting a 0.920 save percentage.
Unfortunately, most fans will have forgotten the win streak. Only to remember the abysmal back-to-back losses against the Manitoba Moose that foretold impending doom for the Farm’s two-game playoff series against the Bakersfield Condors. DiPietro allowed twelve goals against and authored a .794 save percentage during those two final games.

Oh DiPietro.. it has NOT been your weekend

Think I could hear Ian Clark breaking pencils at RA from my house#AbbyCanucks #Canucks pic.twitter.com/To2H68eFXr

It was ugly.
Fortunately, it wasn’t all like that! DiPietro remained his usual ultra-athletic self, throwing every body part he could towards shots to make godly highlight-reel saves.
Advertisement
Ad
Advertisement
Ad

Still working my way through the first period

Klimovich gives away the puck inside the d-zone and immediately stops chasing the play…coaches are going to have some things to say about that.

DiPietro’s athleticism carries him a pretty fair distance at the AHL level. His wild and flashy approach seems to mesh quite well with the chaotic nature of the “every rush is an odd-man rush” brand of AHL hockey. DiPietro kept his team alive this season with countless “clutch” saves, only to let the “easy save” past him.

DiPietro’s weakness has always been his size, with puck-tracking through screens being a significant disadvantage this season. While he does a great job of tracking pucks in action around the crease, it’s the shots from a distance that killed him repeatedly.
Advertisement
Ad
Advertisement
Ad
It was clearly a frustrating season for DiPietro, marked by some decent highs and some incredible lows. At twenty-two years old, DiPietro still has plenty of time to round out his game. It depends on whether the current management group sees DiPietro as someone with more to give than what Canucks fans saw this past season.

Spencer Martin only started two of Abbotsford’s first fifteen games this season. The first was a 33-save overtime loss against the Ontario Reign. The second was a 25-save regulation win against those same Ontario Reign.
Through his first ten starts, including three at the NHL level, Martin earned the Canucks organization points in every game. It wasn’t until his AHL return, on February 7th, that Martin failed to pick up points for his team, a 22-save regulation loss to the Western Conference-leading Stockton Heat.
Advertisement
Ad
Advertisement
Ad
He was great! His NHL performances were the stuff of legend! Three wins, two overtime losses, and one shutout loss. Three games kept Vancouver’s playoff chase alive, and three that closed out garbage time on another disappointing Vancouver season. Martin absolutely earned his contract extension. The first one-way deal of his career!
Martin finished the year with a stellar 0.944 save percentage at 5v5 and an overall save percentage of .915 in Abbotsford.
I remain skeptical that Martin can repeat his .950 NHL save percentage or his 0.75 points-earning percentage, but what he accomplished in Abbotsford after being picked up for future considerations is incredible.

Like DiPietro, rookie netminder Arturs Silovs entered the 2021-22 season looking to catch up on lost playing time.
After a lukewarm OHL debut in 2019-20 with the Barrie Colts, Silovs spent the bulk of 2020-21 scrounging for ice time. All told, Silovs finished the pandemic-shortened season having played only seven games of professional hockey, six of which came in his home country of Latvia, one while on loan with the Manitoba Moose.
Advertisement
Ad
Advertisement
Ad

Arturs Silovs 2021-22 record as starter
Silovs’ rookie AHL campaign began with a thirty-four-save shootout victory against the Ontario Reign, followed by a twenty-six-save shutout against the Henderson Silver Knights. Including his pre-season game against the Seattle Kraken, Silovs played safe, conservative, and employed many of the principles common in Ian Clark-trained netminders: calm, cool, collected, glove out front, never selling the save, and quick foot movements while also staying high and tight on posts while tracking cross-ice movements.
As Ryan Johnson said, “Artie Silovs, he’s got ice in his veins. Nothing phases him.”

Canucks passing on the powerplay has been trash the past 4-5 games… Gulls' Adams-Moisan handed a dangerous shorthanded scoring chance. Fortunately, Silovs comes up huge with the stop.#Canucks #AbbyCanucks pic.twitter.com/8Rz3qKWN1f

Unfortunately, despite the hot start, Silovs’ play fell off dramatically afterwards when five straight losses spelled an end to his tenure as Abbotsford’s AHL backup. With Silovs’ regression, Martin saw an uptick in his spot duty, eventually wrestling the starter duty away from DiPietro and Silovs.
Advertisement
Ad
Advertisement
Ad
It’s worth noting that during Silovs’ run as the starter, the Abbotsford Canucks provided run-support of 2.33 goals-for per game. With DiPietro in net, the Canucks provided an average of three goals-for per game! With Martin, the Canucks provided 4.16 goals-for per game in run-support! Not sure what Silovs did to deserve such poor run support, but that will have to change next year. Maybe he should bring the team donuts on the first day of camp?

Artūrs Šilovs with an uncharacteristic misplay behind the net! He's been strong all night, but had to clip this for the lulz

Areas that Silovs stands to improve on are his five-hole coverage on east-west movement, his blocker-side coverage, and his composure under pressure. For the latter, it didn’t happen often. But, Silovs’ occasionally panicked while attempting to settle dump-ins behind his net, leading to dangerous own-goals or egregious giveaways into the slot.
Advertisement
Ad
Advertisement
Ad

"Arti, in his young time playing for me, has done nothing but show *really* well. He looks like a great young prospect for the team and I thought he played really well again tonight."

After a 31-save loss to the Ontario Reign on October 29th, Silovs would start just six of the Canucks’ next sixty-two games played. Silovs final AHL game came on January 30th, in a 5-3 loss to the Manitoba Moose. It wouldn’t be until forty-seven days later, after being sent down to the Trois-Rivieres Lions, that Silovs started his next game of hockey.
The Canucks organization are reportedly quite high on Silovs’ potential as a future NHLer. On CHEKTV’s Donnie and Dhali, Abbotsford GM Ryan Johnson emphasized the need moving forward “to make sure [Silovs] has a lot of reps at the AHL level.”
Advertisement
Ad
Advertisement
Ad
However, the effort to get Silovs AHL reps has been alarmingly lacking to this point. While on loan to the ECHL, Silovs started as many games in thirty days as he had in Abbotsford over four months. Even factoring in his struggles at the start of this season, such little playing time doesn’t scream “good development process” for a twenty-one-year-old goaltender.
If the Canucks wish to avoid repeating the haywire development of Michael DiPietro, they will have to get Silovs playing more than a handful of games in the AHL next season. They need to let him work through his slumps at the AHL level instead of letting him sit idle in the press box. Fortunately, with Martin’s promotion and DiPietro’s uncertain status as a pending RFA, Silovs stands to inherit a decent improvement in his workload where he can iron out the kinks in his game.
Advertisement
Ad
Advertisement
Ad