Advertisement
Ad
P Is For Playoffs 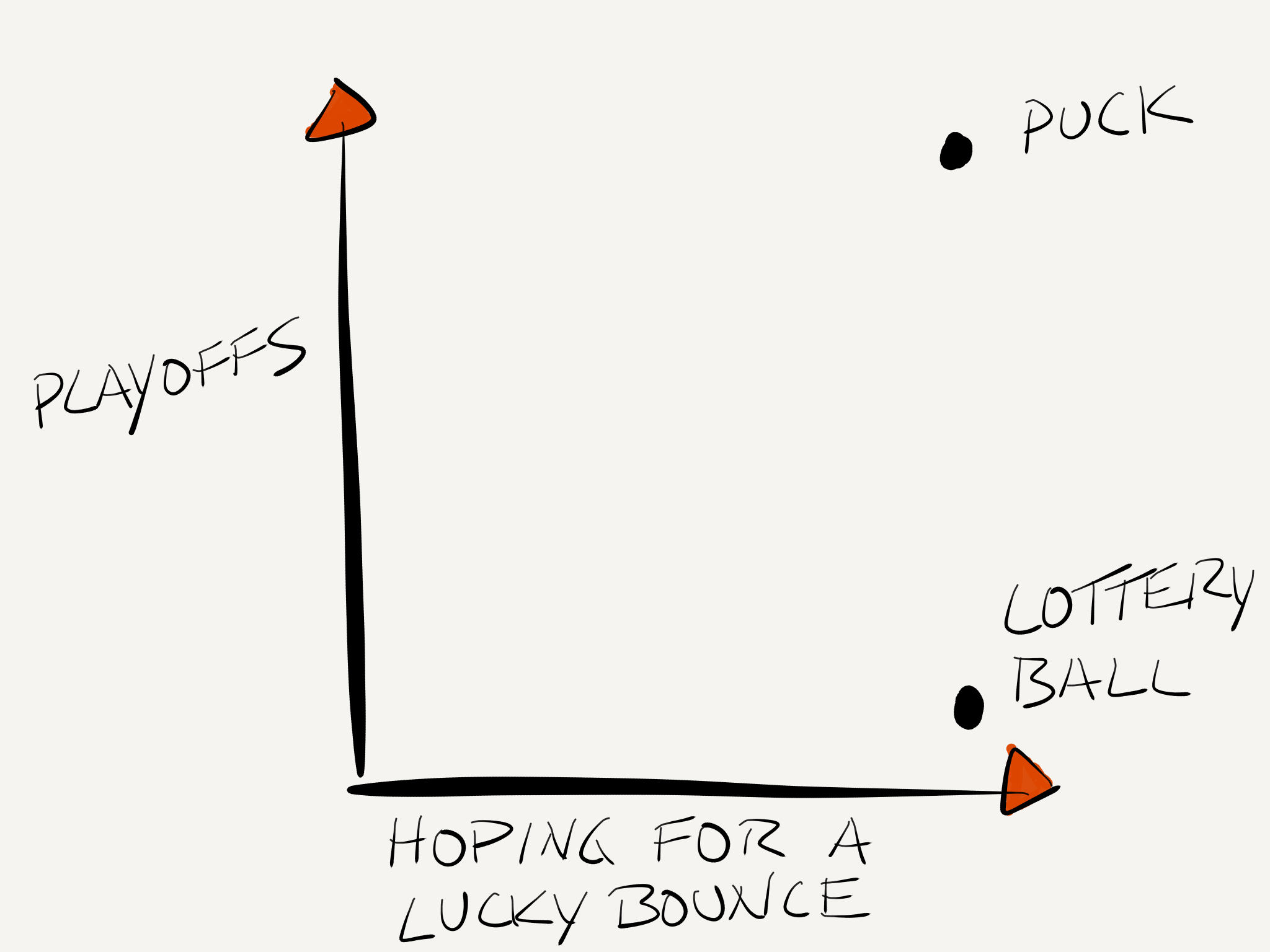 By Graphic Comments
4 years ago
Comments
Well, it’s that time of year again. When Canucks Army turns to prospect profiles while the rest of the league focuses on the playoffs.
It wasn’t that long ago that these pages would be teeming with wild-eyed optimism about the prospects of a Canucks’ playoff run. But as we put the third year of Brandon “I’m not comparing him to Patrice Bergeron” Sutter’s contract behind us, we can take solace in the fact that we are half-way there.
I’ve singled that particular tweet out because the all the actions, some big, some small, between the Sbisa extension and the Sutter trade and extension were enough to make me realize what Jim Benning was as a GM. And just how long it was going to take this team to get back to the playoffs under his direction.
Advertisement
Ad
Advertisement
Ad
But I’m not here to re-hash old criticisms. There will be plenty of time for that in September when Benning and Linden trot out their familiar tropes.
The fact is, there are plenty of other GMs around the league that have made the types of mistakes that are the difference between hoping for bounces in a playoff game or hoping for bounces in a lottery machine.
And there’s no better case study in all this than the first ever draft pick of the Vancouver Canucks, Dale “back in the saddle” Tallon down in Florida.
The Panthers are in the unenviable spot of missing out on the playoffs by the narrowest of margins and winding up with only a 1% shot at winning the draft lottery. With but a single point between Florida and either of the two Wild Card teams in the east, the Panthers were a timely goal or two away from finding their way back to the post-season following an injury-riddled 2016-17 campaign.
Advertisement
Ad
Advertisement
Ad
In fact, this past season it took about +2.5 in goal differential to get one standings point:
Next time anyone says there’s no tanking in hockey, show them this chart ask them to explain that gap.
As an aside, we can flip this chart around and look at it in terms of lottery probabilities:
If we ignore the three teams that were clearly still trying at the end of the season, the trend is very clear: on average, every -3.7 in goal differential increased the lottery teams’ odds by 1%.
But nerdy observations aside, the notion that there’s a link between goals and the standings, at either end of the spectrum, shouldn’t come as a surprise to anyone.
This brings us back to the Panthers, who find themselves exactly where you don’t want to be: out of the playoff picture and with only the slimmest of lottery probabilities. And they have no one to blame but themselves their GM.
Advertisement
Ad
Advertisement
Ad
As I’ve covered before, not only are the 200 hockey men resilient, they are also vindictive. And if there’s one thing Tallon was hell-bent on doing after he was “back in the saddle“, it was to undo everything that had been done during the year or so that he had been sidelined. Or to put it another way, the counter-revolution led to the Reign of Error.
Given how a couple of timely goals may have been the difference between at least two playoff home dates or an early tee time, it seems like the Panthers really could have used a couple of guys like Jonathan Marchessault and Reilly Smith. But alas, they were casualties of the expansion draft and have just led the Vegas Golden Knights to a sweep of the LA Kings.
Advertisement
Ad
Advertisement
Ad
Because of the timing of the Smith trade to coincide with the expansion draft, the accepted wisdom is that it was linked to leaving Marchessault exposed. Even Bob McKenzie reported it that way at the time:

I'm presuming FLA had to reduce its budget. In order to move Smith's contract, Marchessault had to be used as inducement. A $ deal IMO.

But just earlier that same day, McKenzie offered up a slightly different take on the situation:

Counter-intuitive as it may seem, there's been talk FLA was trying to move both Marchessault and Smith even before VGK entered the picture.

But as I looked into this a little further, it sure seems like there was more to this than meets the eye.
Advertisement
Ad
Advertisement
Ad
In March of last year, long before the protected lists had been decided, let alone made public, ESPN had their hockey columnists do a mock draft of players they thought would be available for the Vegas Golden Knights. They then put together potential 23-man rosters from each columnists picks. Here is Pierre LeBrun’s 23-man roster:
So at the end of March, with Jonathan Marchessault having a monster breakout year and on a very team-friendly contract, NHL insider Pierre LeBrun thought he would be left exposed by the Panthers. Yes, there are some other contentious selections on his list, but there was legitimate discussions over whether players like Mathieu Perreault in Winnipeg and Jonas Brodin in Minnesota would be protected given the roster decisions those teams would have to make. Ultimately, those contentious selections didn’t matter because the respective teams worked out deals with George McPhee either to take or lay off certain players, making their respective protected lists moot.
Advertisement
Ad
Advertisement
Ad
But the idea of leaving Marchessault exposed really was out of the blue. Absolutely no one was talking about it going into the expansion draft, let alone before the season was even over. And yet, that’s exactly what LeBrun was thinking, apparently. So, did he really look at the Panthers’ roster and come to the conclusion that they would be willing to let their only 30-goal scorer on the year, making $750,000 for another season, go for nothing? Or did one of his contacts tell him that’s what they were considering?
My money is on the latter, which means Tallon was dead set on purging the Panthers of anything the “computer boys” had done while he had been sidelined the previous year, regardless of whether it harmed the team in the long run. Even Reilly Smith, who was ostensibly dealt as an order from ownership to dump salary, was persona non grata long before the deal was done under cover of the expansion draft:
Advertisement
Ad
Advertisement
Ad

You look at Reilly Smith from Vegas. There was a game last year where Florida basically decided they were getting rid of Reilly Smith. It was late in the year, they were still competing for the playoffs, and they played Dallas and they lost 2-1. And Tom Rowe, who was coaching Florida at the time, called out Smith on both of the Dallas goals. And if you watch them, Rowe was totally right – he was at fault.

Same with Demers. Dale Tallon couldn’t move him fast enough once he had solidified control of the team. So fast, in fact, that he had to trade him twice after Demers refused to waive his NTC to come to Vancouver for Erik Gudbranson.
The latest computer boy asset to get the Dale Tallon purge treatment is Adam Mascherin, who scored 75 goals for the Kitchener Rangers since he was drafted 38th overall in 2016, but is now poised to re-enter the draft:
Advertisement
Ad
Advertisement
Ad

12. The Panthers are trying to trade 2016 second-rounder Adam Mascherin of OHL Kitchener. A 40-goal scorer for the Rangers, he informed Florida he would not sign there before he can re-enter the draft in June. It’s unfortunate, as it appears there was some broken telephone that made things worse than they needed to be. This will not be easy for the Panthers, since interested teams won’t want to give up something if they think they can just draft him in three months. Their best hope is that someone who lacks draft choices where Mascherin might be taken decides it really wants him. [emphasis added]

Funny, but Tallon’s phone seemed to be working just fine just a few months earlier:
So why didn’t Tallon do everything he could to check in on one of his top prospects and try to get him signed before getting too close to the two-year mark, where it might be tempting to just re-enter the draft? Maybe it’s because Mascherin wasn’t his pick.
Advertisement
Ad
Advertisement
Ad
And through it all, his friends in the media are still pushing the same version of events:

The John Shannon hit on Oilers Now RE: FLA is must listen. BIG Dale Tallon fan. "Analytics guys set that team back 2 yrs & now they just have to let Dale Tallon fix it." ?

Yes, to hear the hockey men tell it, it was the “computer boys” that set the Panthers back two years by adding Marchessault, Smith, Demers, Yandle, Pysyk, McCann, Reimer, and numerous high-quality draft picks, including Mascherin, while ridding the team of Gudbranson, Kulikov, Crouse, Marc Savard’s contract, and Dave Bolland’s corpse contract.
They know this because, you see, the Panthers missed the playoffs last year. So, it must be because of the “analytics guys”. Definitely not because of the injuries to Huberdeau, Barkov, and Ekblad. I mean, no real hockey man would use injuries as an excuse for missing the playoffs, right?
Advertisement
Ad
Advertisement
Ad
Oh. This is awkward:

Dale Tallon: "If [the goaltenders] were healthy, we probably would've made the playoffs."

The fact is, you can trace the Panthers missing the playoffs back to Dale Tallon’s need to “fix” the moves made by the computer boys.
In Tallon’s case, it turns out that P isn’t for playoffs after all. P is for pettiness.
Follow @petbugs13
Follow @GraphicComments