Advertisement
Ad
CC is for 200 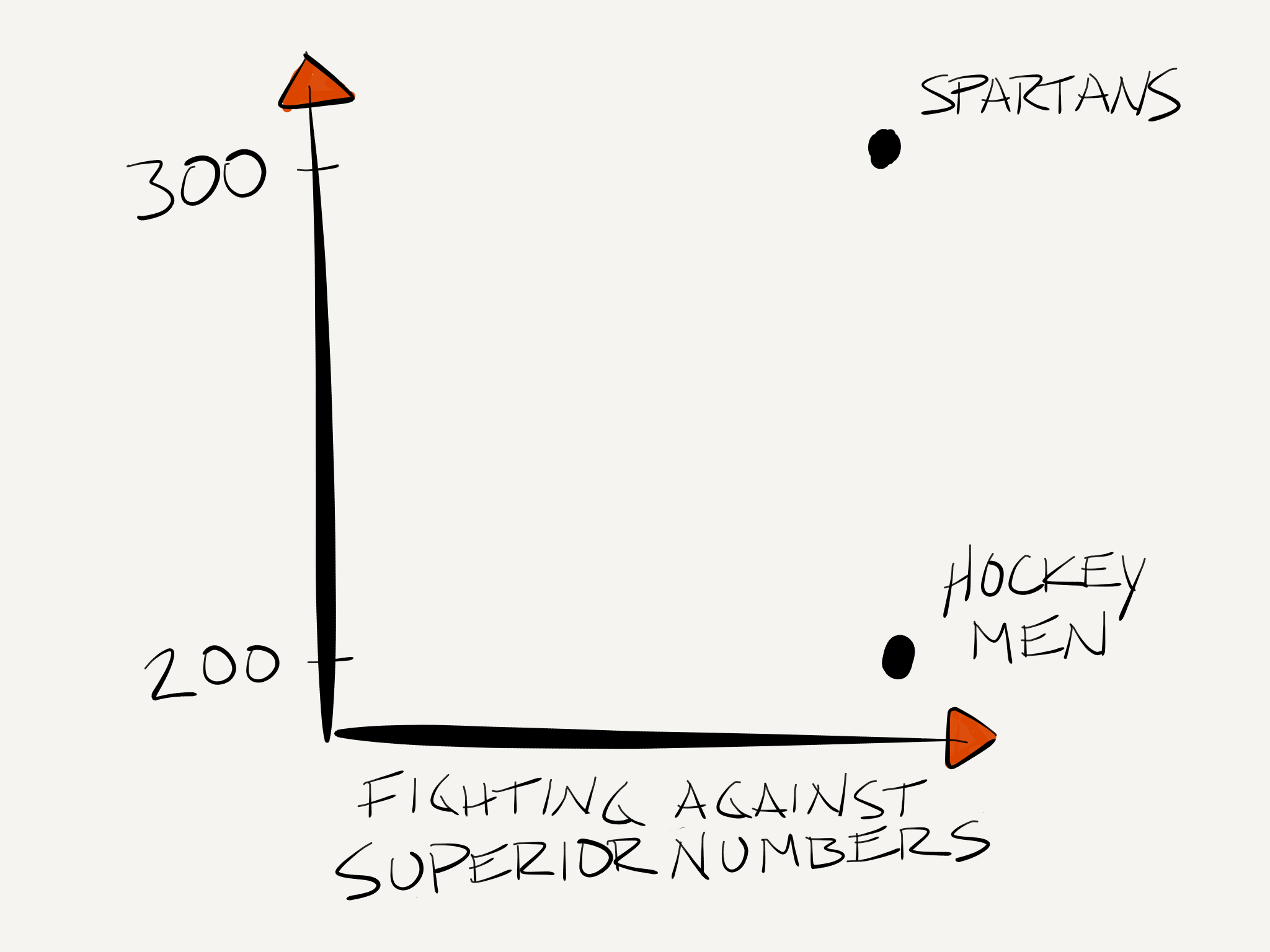 By Graphic Comments
5 years ago
Comments
In 2016 AD a state of war existed between a loosely organized alliance of hockey men running the NHL’s city state-like franchises and Big Corsi, with their overwhelming numerical advantage. Big Corsi’s first attempt to gain a foothold in the established hockey world ended with a decisive victory by the hockey men at the Battle of Edmonton.
But we all know that Big Corsi plays the long game. So in 2016 they again sent an invasion force to capture Florida with numerical superiority.
And it is here, that the 200 hockey men achieved their greatest victory over the Computer Boys…
Ok, enough of that. I’m not going to re-write the entire screenplay for 300 here.
But what I am going to do is talk a little about the resilience of the hockey establishment and how they keep the outsiders at bay.
You need look no further than the last 12 months in Florida to see how the establishment mobilizes to defend against an outside threat.
A year ago, Dale Tallon had been pushed aside as GM and was effectively on his way out of the decision-making process:
Advertisement
Ad
Advertisement
Ad

Sounds like Dale Tallon will be moving to a President of Hockey Ops-style position in Florida. Tom Rowe as GM. Eric Joyce as AGM.

To be clear, he wasn’t completely out of the decision-making process. He was still officially in charge of hockey operations for the franchise, but the day-to-day running of the team was now ostensibly a three-man operation:

I can confirm. Has been in the works; Told Dale will continue doing what he does, with more input from Tom/Eric https://t.co/ERnPXcKvwb

That said, getting pushed upstairs and having to share the decision making power with GM Tom Rowe and AGM Eric Joyce was clearly the first step to pushing him out of the way entirely.
But the NHL’s old guard isn’t pushed aside so easily. Following a disastrous run of bad injuries, bad luck, and bad press, Tallon was back in the driver’s seat by Christmas. Or should I say back in the saddle:

Several GM's have confirmed Tallon reached out this week to advise them he's "back in the saddle." https://t.co/DfFIis6vOJ

And boy was there was much glee in the mainstream hockey press when this happened. You see, the 200 hockey men aren’t just working for the league and its teams. No, some of those 200 are in the media. You need look no further than the media reactions from the old guard when first Tallon was sidelined and then Gallant was unceremoniously fired to see just how interdependent they are with the men running the teams.
Advertisement
Ad
Advertisement
Ad
C, it turns out, is also for ‘collusion’.
I mean, it’s an open secret that Dreger had a direct line into the Leafs’ front office while Dave Nonis was there, and he has the a similar arrangement with Tallon in Florida. It shouldn’t be a surprise that Dreger was the first one to come out with the news of Tallon’s fall and rise in Sunrise. It’s not just that he was that first one out with it — I mean, that’s his job as an NHL “insider” — it’s the slant that he put on his scoops, which was always from Tallon’s perspective. But again, that should not be a surprise:
When you bring that critical analysis to the information that some of these insiders put out, things start to make a whole lot more sense. Sometimes comically, so:
Advertisement
Ad
Advertisement
Ad
And the collusion isn’t just with front office staff. It’s also with NHL executives.
Remember when Dreger was brazenly inserting himself into the NHL’s disciplinary process?
All this to say that hockey’s old guard, the so-called “200 hockey men”, span NHL front offices, league management, and the mainstream hockey media. And when they perceive a threat to their fiefdom, they circle the wagons, look out for each other, and scratch each other’s backs.
This can run the gamut from avoiding the use of Offer Sheets on RFAs to helping an old friend solidify his power base by making a rival look bad to team ownership. And when one of your fraternity is out of a job, you do what you can to get them back in the game. Sometimes, you even going to extremes. In one mind-blowing example, a little bird told me that an expansion franchise was contingent on the hiring of a specific GM!
Advertisement
Ad
Advertisement
Ad
Seriously, the NHL is only a funny handshake away from being a secret society.
The thing about secret societies in general, and the old boys’ club running the NHL in particular, is that they are relics of the past. And as such, they lack the imagination to understand what the hockey fans of tomorrow want, and how to draw them in and grow the game:
Ultimately, the NHL will come around — whether it’s the use of advanced statistics, addressing the unnecessary violence in the game, or dealing with concussions. One way or another, the inexorable march of progress and numerical superiority will overcome the resistance to change. Just this week, yet another organization recognized the value of applying data analysis to their sports business:

Thrilled to announce that my dear friend @DTMAboutHeart will be working with Kroenke Sports (who own the Avs) as a multi-sport analyst!

It is only a matter of time before the Computer Boys and Big Corsi are running the show. Until then, all we can do is sit back, grab another bag of popcorn and wait for the sequel. Maybe we can call it 200: Fall of an Empire.
Advertisement
Ad
Advertisement
Ad