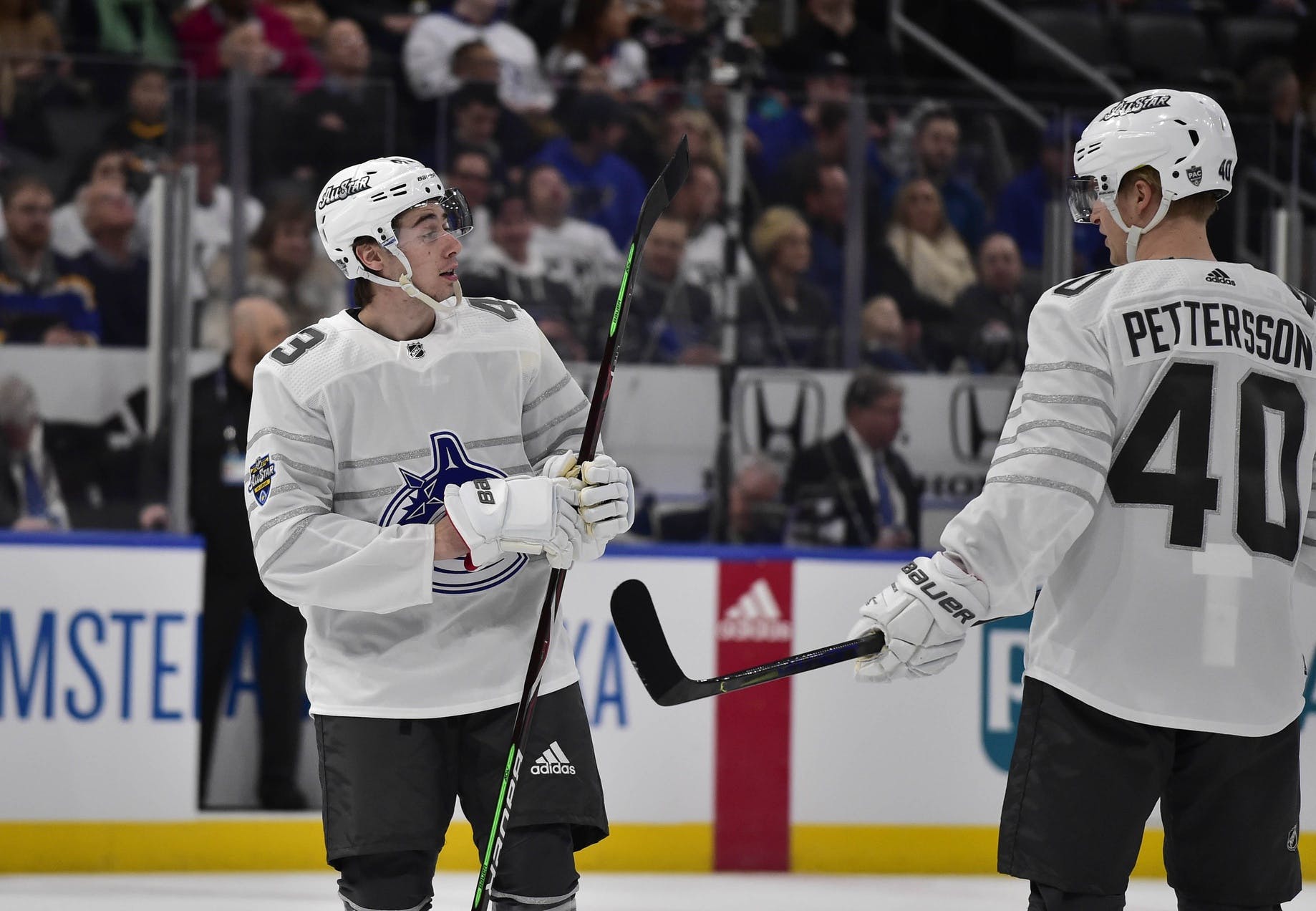 Photo credit: © Jeff Curry-USA TODAY Sports
By Faber
1 year ago
Comments
We’ve reached the dog days of summer for hockey news but still have a few things to talk about when it comes to the Vancouver Canucks.
Let’s check out what happened over the past week.

Olli Juolevi has inked a one-year deal league-minimum deal with the Canucks. The team announced the deal on Monday afternoon and after seeing the league minimum salary, this should be looked at as a good deal for both Juolevi and the organization.
Obviously, Olli Juolevi has not lived up to his 5th overall selection in the draft and still appears to struggle with defending the rush as his body is simply limiting what he is able to do on the ice. That being said, I still believe that last season was a big step for the young defenceman as it was the first season in three years where he was able to stay healthy.
Juolevi was used in very sheltered minutes last season while primarily playing against bottom-six competition while also being saddled with the Canucks’ bottom-six forwards for most of his ice time.
Advertisement
Ad
Advertisement
Ad
Teammates and Competition chart provided by HockeyViz.
He spent 77% of his time alongside Tyler Myers and though it was against weak competition, the Juolevi-Myers pairing had decent counting stats when it came to shot share and even possessed a positive control of the goal share while being on the ice for nine goals for and eight goals against in 207 minutes.
The trouble with Juolevi is the toll that his past injuries have taken on his body. It’s clear to see that he struggles while defending the rush and when you are getting beat by guys like Milan Lucic and Josh Leivo, you’re just not quick enough in the neutral zone to stick around in the NHL.
I still hold out hope that Juolevi can bring something to the Canucks’ bottom-four defence. He’s only 23 years old and we are finally now seeing what a healthy Juolevi looks like. This offseason is key for his development and he will need to come back in better condition than he was last season.
Advertisement
Ad
Advertisement
Ad
With players like Jack Rathbone and Brad Hunt expected to make a push for the Canucks’ roster, Juolevi will need to have a strong camp to be one of the 23 players who isn’t sent down to the AHL. The piece that he has on his side is that he will require waivers to go to the AHL and a team may potentially take a shot on the former 5th overall pick if he hits waivers. He hasn’t shown enough to be a lock to get picked up but the situation may present itself if Rathbone and Hunt have good camps.

We are now in a world where news gets broken on Instagram and that is how we found out that Conor Garland will be wearing Chris Tanev (2012-2020), Taylor Hall (1986-87) and Willie Mitchell’s (2007-2010) old number eight.
Advertisement
Ad
Advertisement
Ad

Looks like Conor Garland will be the Canucks’ new #8 #Canucks pic.twitter.com/O4UYy1pDzl

Garland has only worn number 83 through his NHL career.
He will be one of the biggest stories to begin the season as there is a lot of pressure for him to perform as a top-six player. Garland signed a five-year, $24,750,000 contract with the Canucks on July 27th.
In other Garland news, it’s unfortunate that we won’t be able to see this rocking stache on opening night.

Conor Garland: "The moustache won't be there come opening day."

Say it ain't so! That thing is majestic. #Canucks pic.twitter.com/kcY5kTWDh5

It’s unlikely that we get to this point as a deal should be reached between the Canucks and Jason Dickinson’s agent before the August 20th arbitration. Dickinson is represented by Pat Morris, who is also Bo Horvat’s agent.
Most projections have Dickinson coming in between $2,250,000 and $3,000,000, depending on the years on the deal.
Advertisement
Ad
Advertisement
Ad
I imagine he comes in on a three-year deal with somewhere around a $2,550,000 average annual value. This feels like a good deal for the Canucks if they truly have found their third-line centre for the next few years. Dickinson is going to bring his defensive style of play to the Canucks and it will be interesting to see which two wingers are on his side once we start the season. It feels like it’s going to be Tanner Pearson and Vasily Podkolzin and if so, that will make up a strong shutdown third line that will open up offence for the other three lines.
As long as the Canucks can keep Dickinson under $2,750,000, it looks like a fine deal to me.

As expected, Micheal Ferland told The Athletic’s Thomas Drance that he will not be playing pro hockey in the future.
Advertisement
Ad
Advertisement
Ad
Ferland will be joining the Western Canada Hockey Academy to help develop the next generation

The former Wheat King star that played 357 NHL games with the Calgary Flames, Carolina Hurricanes and Vancouver Canucks has accepted a position as the new On-Ice Development Coach!

Welcome to the WCHA Mike! pic.twitter.com/WrBW5lXMpy

Thatcher and Lexie are engaged and make a goalie power couple

The goalie couple officially has a ring on it. Thatcher Demko proposed to his now-fiancee Lexie Shaw this past week and the duo is likely the most powerful goalie couple in the world.

Big congrats to Thatcher Demko and his fiancee, Lexie, on their engagement!

Shaw was an excellent goalie during her time in the NCAA at North Dakota. She posted a career 0.920% save percentage over her four years at UND while having an astounding six shutouts in 35 games with a 0.928% save percentage and 1.68 goals against average in her senior year on a team that went 15-13-6. It seems like both Lexie and Thatcher know the pain of carrying a bad team to wins.

No news on the Elias Pettersson and Quinn Hughes contracts

Everything is quiet on the contract talks between the Canucks and their two superstars. This feels like a good thing as any day here we could have a new deal for the two cornerstones of the franchise. If we get into late August or September, there may be worrisome fans wondering what is going on with Elias Pettersson and Quinn Hughes.
You don’t want these deals to go into training camp but we have seen Jim Benning do that with his stars in the past. Brock Boeser was not signed at the time of training camp for the 2019-20 season and even Bo Horvat’s deal went late as they signed him on September 8th before the 2017-18 season.
I’m not worried about the deals getting done, I just hope that one can be locked down for longer-term and the rumblings from the agent and sources are saying that it will be Hughes potentially getting the longer deal. It will be interesting to see if the Canucks choose to perhaps give Hughes a six-year deal and go very short with Pettersson on a two or three-year deal.
Advertisement
Ad
Advertisement
Ad
This may be a way to balance the cap but could set up Pettersson for a mega-deal that sees him make more than $10,000,000 a year on his third contract.
Time will tell with this one, as things are quiet now and that may be a good thing…
That wraps up a quick little hit about the news of the week in Canuckland.
What do you think Pettersson and Hughes’ contracts will look like?
Let me know in the comments and be sure to check out my latest prospects report where I spoke to nine Canucks prospects on what their current and future situations are for each of their 2021-22 seasons.