Advertisement
Ad
Is Travis Green Holding Virtanen Back – Or Are Low Minutes The Secret To Shotgun Jake’s Success? 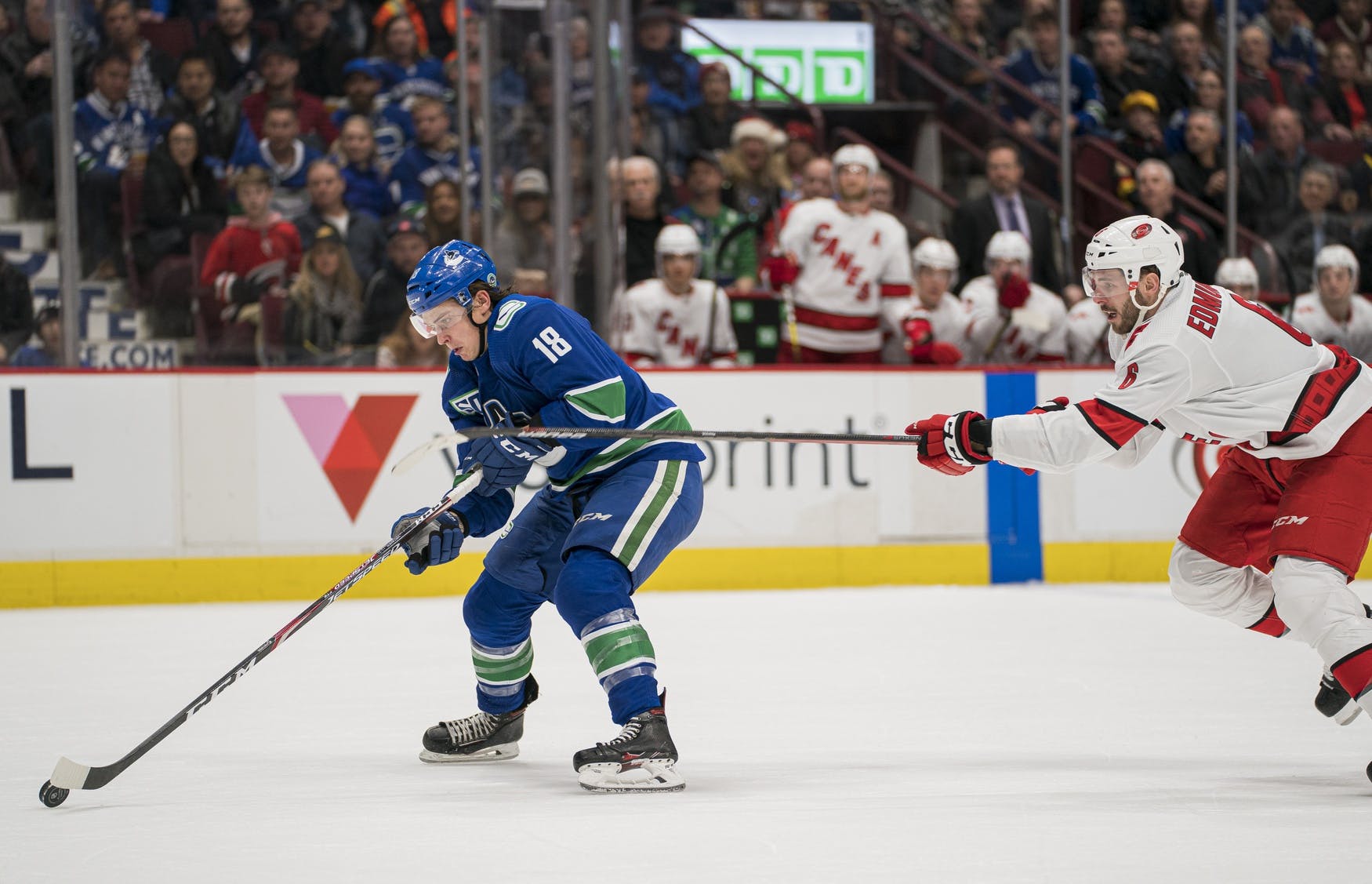 This article was originally going to be titled something along the lines of “Is There Any Reason To Believe Jake Virtanen Isn’t A Top-Six Forward?” And while that ended up hewing a little too closely to our own Chris Faber’s excellent work from last week, it’s still an argument that’s worthy of retreading.

On the surface, Virtanen is definitely putting up some top-six numbers. As of this writing – the morning of Monday, December 23 – he sits tied for 131st overall among forwards with 20 points in 37 games. Under the simple maxim that there are 93 first-line forwards (three for each team) and 186 second-liners leaguewide, his base production would already seem to indicate that Virtanen is a mid-tier second line forward.
From NHL.com
To wit, he’s only one point back of Phil Kessel with a game in hand, and one point ahead of Jeff Skinner. That’s the sort of territory Virtanen has vaulted himself into this season.
From NHL.com
Virtanen also sits exactly sixth in scoring among Vancouver forwards, though both Josh Leivo and Adam Gaudette edge him out in terms of points-per-game. In short, Virtanen is producing like a top-six forward – even if he isn’t being played like one quite yet.
Advertisement
Ad
Advertisement
Ad
From NHL.com
Virtanen currently sits 11th on the Canucks’ forward corps in terms of average time-on-ice, with a seemingly paltry 12:21 average. That puts him behind such illustrious names as Brandon Sutter, Tyler Motte, and Jay Beagle – and only a scant few seconds ahead of Tim Schaller.
It gets even worse once one considers powerplay time-on-ice, where Virtanen ranks 12th among forwards with just 23 seconds per game. Say what you will about the treatment of Sven Baertschi, but it could definitely be argued that he’s received more of a genuine top-six opportunity when in the lineup that Jake Virtanen has all season – without generating the same results.
Even Virtanen’s busiest games – like the 15:55 he skated against Pittsburgh last Saturday night – put him in the range of what Leivo and Tanner Pearson have been pulling down on a nightly basis.
Advertisement
Ad
Advertisement
Ad
With all this being said, it’s easy to see how and why the notion has emerged that coach Travis Green has been holding Virtanen’s development back from perhaps bigger and better things. This author, however, would like to submit an alternate line of thinking  – that Virtanen is succeeding because of, not in spite of, Green’s limited minutes.
Below, we’ll dive deep to determine which narrative, if either, rings more true.

Jake Virtanen’s raw on-ice minute totals would lead some to conclude that Travis Green is currently deploying him as a third line winger, but that comes with a caveat. When hockey fans hear “third line,” they’re conditioned to think of a checking role – but that’s not at all the job that Virtanen has been given this year.
Advertisement
Ad
Advertisement
Ad
From NaturalStatTrick.com
Though we wouldn’t go as far as to call Virtanen’s minutes “sheltered,” he has started the majority of his shifts in either the offensive or the neutral zone – when he isn’t being put onto the ice on the fly in an attempt to keep momentum going. He’s also being asked to play against below-average competition in terms of both the forwards and defense pairings he regularly skates against – which makes sense on a roster where Elias Pettersson’s line is going to draw the toughest matchups while Bo Horvat and Jay Beagle eat up hard defensive assignments.
From HockeyViz.com
Both Virtanen’s offensive zone time and his quality of competition have only become more favourable since being put on a line with Adam Gaudette and Antoine Roussel. It sure looks as though Green is using the trio as one of those vaunted third scoring lines – something that has been clamoured for by fans and analysts alike, including again our own Chris Faber, for years now – and the results speak for themselves.
Advertisement
Ad
Advertisement
Ad
But doesn’t that also suggest that Virtanen could be doing even more, if he were given an even greater opportunity? Perhaps not!

It’s easy to look at Jake Virtanen’s scoring pace, extrapolate it into greater time-on-ice, and suggest that he could easily be putting up close to 30 goals this season – but it isn’t quite so simple as that. In fact, there are several reasons to believe that more minutes could be a detriment, rather than a boon, to Virtanen’s production – despite a per-minute scoring rate that is on par with anyone on the team not named Elias Pettersson.
From FoxSports.com
For one, both of Virtanen’s Expected Goals For and Against statistics are right in line with his current production. His possession numbers also rate just short of even, which suggests that Virtanen could be a bit overwhelmed under heavier minutes against tougher competition.
Advertisement
Ad
Advertisement
Ad
From NaturalStatTrick.com
In other words, the lesser minutes Virtanen has been given by Travis Green may be hampering his offensive totals, but they’re also limiting Virtanen’s chances to make defensive miscues – which, by their very nature, have a detrimental effect on one’s production.
To take a less scientific approach across a small sample size, Virtanen also hasn’t noticeably increased his production rate when he has been given additional minutes by Green in the 2019/20 season. Across the six games in which Virtanen has played around 14 minutes or more this year, he’s notched just three points – exactly on par with his overall pace.
One area in which there does seem to be more opportunity to grant Virtanen more minutes is on the powerplay. Among players who have skated the entire season with Vancouver, Virtanen is easily the most efficient powerplay scorer, despite having received very few chances on the man advantage.
Advertisement
Ad
Advertisement
Ad
From NHL.com
Fortunately, this is a bridge that coach Green seems to have already crossed, with Virtanen having earned a spot – and several points – on the second powerplay unit as of December’s latter half.

Virtanen and Miller scored, while Markstrom didn't face a shot in the 1st.
Solid start to this one! pic.twitter.com/1Gq4JRXKbY

While more powerplay time seems like the perfect way to juice Shotgun Jake’s stats a little bit, that might be the limit of the additional minutes Green should be granting to the 23-year-old – and there’s a couple of reasons for that.

Workin’ On My Fitness

The clash between Travis Green and Jake Virtanen over personal fitness was perhaps the most controversial story to come out of the 2019/20 preseason – or, at the very least, right up there with the dual demotions of Sven Baertschi and Nikolay Goldobin.

Got a feeling that this whole Jake Virtanen thing is going to get blown out of proportion, so here's my take:
1) Green and JV agree on aggressive fitness goals, with consequences if they're not met.
2) JV barely misses the goals.
3) Consequences applied, deal is a deal.#Canucks

While those troubles appeared to be in the rear-view mirror long before training camp concluded, it’s entirely possible – and perhaps logical – to still draw a connection between Virtanen’s cardio and his ongoing lack of ice-time. In fact, it could in all likelihood remain a factor for the rest of Virtanen’s career.
Advertisement
Ad
Advertisement
Ad
Virtanen is slowly but surely developing into a genuine power forward, and that puts him – as an individual that has traditionally struggled with fitness – in a tough position. From here on out, Virtanen will have to walk a tight line every offseason between adding strength and maintaining speed, which is about as easy as it sounds.

#Canucks Virtanen hits Letang and the linesman ends up in the bench pic.twitter.com/3CJDG7qvou

Trying to continually add bulk while staying fleet of foot will be a yearly challenge for Virtanen moving forward, and the end result may very well be that he will never be capable of playing his style of game for an excessive amount of minutes.
By limiting Virtanen’s ice-time, Green is ensuring that Virtanen can play his hardest each and every shift – and that’s exactly what he needs to be successful. We’ve already seen what it looks like when Virtanen starts to fall a step or two behind, and it certainly isn’t the same Shotgun Jake that the entire Lower Mainland has come to know and love.
Advertisement
Ad
Advertisement
Ad

To conclude, we’re going to leave the realm of objectivity and wade into the murky waters of the “eye-test.” After all, is there anyone out there who wouldn’t attest that Jake Virtanen appears to be playing an altogether different game in 2019/20 than he has in years past?
The key difference, at least to this author’s testy eye, has to be engagement. Virtanen seems to be more keyed in to each and every game than he has been before – leaping on loose pucks, jumping into post-whistle scrums, and hopping at every opportunity to put an opponent on their backside. As is true of most power forwards, Virtanen plays his best when he’s been “woken up” – and his sleepy games are starting to become more and more infrequent as he matures.
Advertisement
Ad
Advertisement
Ad
Explanations for this increased engagement are many, and include some personal development on Virtanen’s part and no doubt the motivational tactics of coach Travis Green. The infectious energy of both Antoine Roussel and Adam Gaudette is also an important factor to Virtanen being more involved in the game on a nightly basis.

Adam Gaudette with a toe drag to gain the zone and then he sets up Jake Virtanen who beats Dell with the wrist shot. #Canucks pic.twitter.com/Gyp2nejs9R

Whatever the cause may be, it should be obvious to anyone watching Canucks games this year that Virtanen plays better when he’s fully engaged in the game and able to give his fullest effort each and every shift – and that’s something that’s just not sustainable under the heavy minutes of a designated top-six forward.
Again, by limiting Virtanen’s minutes, Green is making it so that the team is getting a lot more out of those minutes. Vancouver fans might just have to get used to the idea of Virtanen as an elite third-liner – the kind of player who consistently puts up strong production from the bottom-six while also fulfilling the role of energy provider and chief agitator.
Advertisement
Ad
Advertisement
Ad
Or, to put it in more hype-worthy terms, the kind of player that every team needs in the playoffs.
And if that’s the sort of forward that Virtanen settles into in the long-term, then Travis Green deserves a lot of the credit for facilitating the transformation.