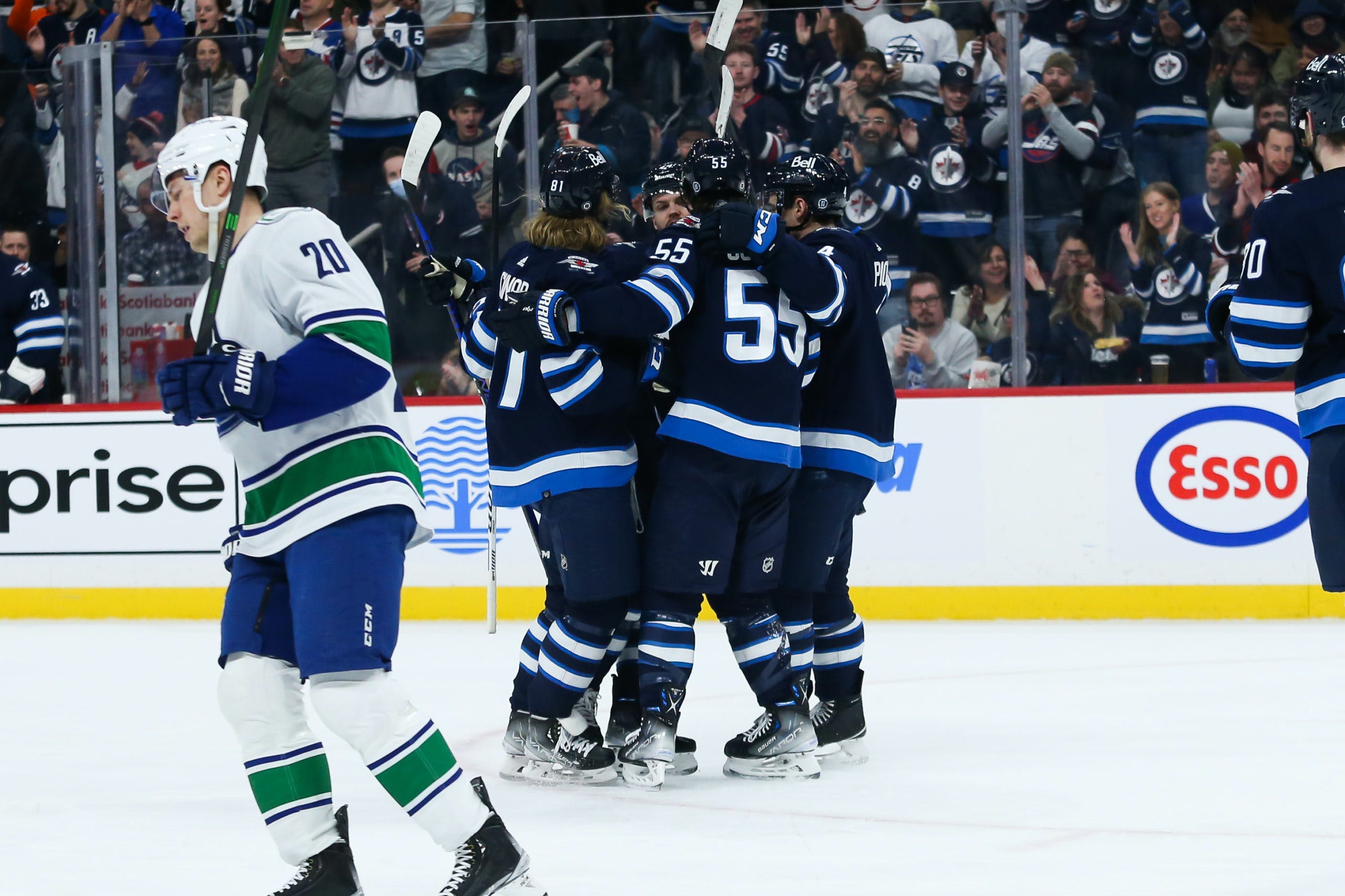 Photo credit: © Terrence Lee-USA TODAY Sports
By David Quadrelli
1 month ago
Comments
Welcome back to Instant Reaction — the series at CanucksArmy where we give our instant reaction to the game and ask our readers to give theirs in the comments section below! The Stanchies by Wyatt Arndt will be posted later tonight and The Statsies — CanucksArmy’s analytics-based post game report by Mike Liu — will be posted later tomorrow.
It was fun while it lasted. Tonight, the Canucks’ three-game winning streak came to an end, as did the Winnipeg Jets’ three-game losing streak.
The Winnipeg Jets are a good hockey team, and the Vancouver Canucks don’t seem to be quite there yet.
The Canucks went toe-to-toe with the Jets in the first period, but it was all bad in the second period, as the Canucks bled chances left right and centre and had to be bailed out on multiple occasions by Collin Delia.
You’ll see it in The Stanchies at least three times I’m sure, but this Elias Pettersson read and subsequent takeaway to set up Andrei Kuzmenko to open the scoring 40 seconds into this one was too good not to show again:

Elias Pettersson uses his oracle powers to intercept a Jets breakout pass and feeds Andrey Kuzmenko for a perfect one-timer. #Canucks lead 1-0 less than a minute into the game. pic.twitter.com/cP0NE8Uqa8

The Canucks then held the Jets back for the rest of the period, entering the second frame up by a goal.
Advertisement
Ad
Advertisement
Ad
They may have gone toe-to-toe with the Jets in the first period, but it was all bad for Vancouver in the second period, as they bled chances left right and centre and had to be bailed out on multiple occasions by Collin Delia.
Despite Delia’s best efforts, the Canucks looked like a shell of the team we’ve seen play lately, and gave up three goals in the second to dig themselves a hole to climb out of in the final 20 minutes of play.
Delia was one positive for the Canucks tonight, as he followed up his solid performance in Edmonton last Friday with another strong showing tonight in Winnipeg. It didn’t lead to a win, but it did lead to the Canucks not allowing the Jets to score five goals like they did the last time they faced the Canucks. That’s got to be some sort of moral victory, right?
Advertisement
Ad
Advertisement
Ad
Delia finished the game with 35 saves on 38 shots. The Canucks didn’t test Hellebuyck nearly as much, as the Jets’ netminder skated away with 20 saves and the 4-2 victory for his team.
That’s my instant reaction for tonight. Short and sweet. The Canucks blew this game in the second period with lackadaisical play and couldn’t claw their way back in the third despite their goalie keeping them in it.
Also, this seemed weird, and I’m interested to see what you all thought about it:

Delia keeps hesitating to go to the bench, and J.T Miller loses it on his teammate. #Canucks pic.twitter.com/nh5zE6P4dA

What’s your instant reaction to tonight’s game? Let it be known in the comments section below!