Advertisement
Ad
Elias Pettersson showed resilience this past week, and that’s what will ultimately break him out of this slump 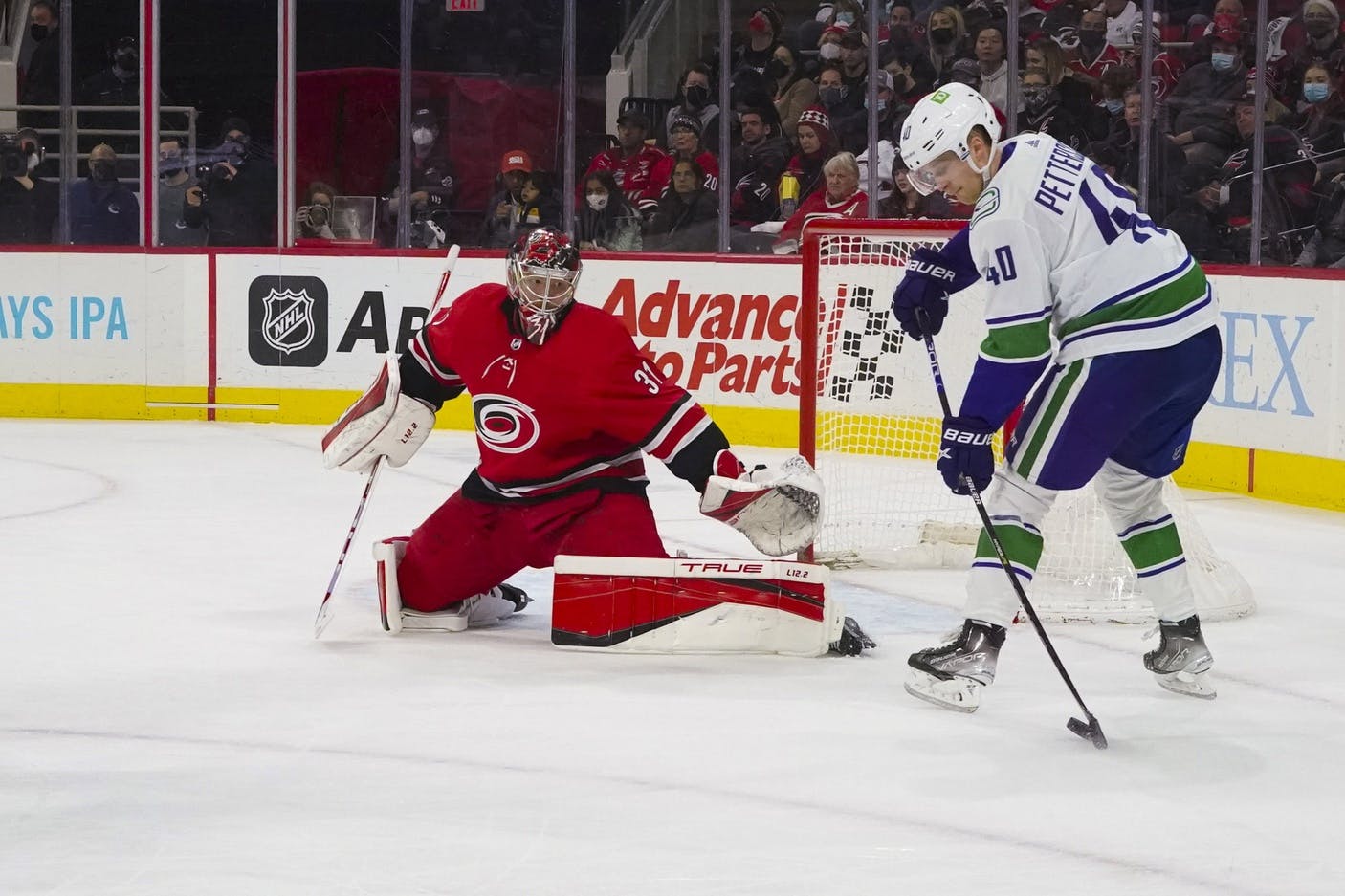 Photo credit: © James Guillory-USA TODAY Sports
By Stephan Roget
10 months ago
Comments
It was an interesting week in what has been an interesting year in the life of Elias Pettersson.
At first blush, Pettersson’s four games for the Vancouver Canucks across six nights don’t look like anything to write home about. Sure, he capped the week off with a two-goal performance against the Washington Capitals, but he went scoreless and registered a -4 in the three games prior.
A closer look at the exact circumstances of Pettersson’s play leading up to that two-goal afternoon, however, reveals something that is, at the very least, a little bit of a pleasant surprise: some serious resilience.
And resilience is what Pettersson is going to need if he’s going to break out of this slump and put the opening half of this season firmly in the rear-view mirror.
Advertisement
Ad
Advertisement
Ad
Pettersson opened the week with a fairly poor performance against the Florida Panthers, but then so did most of the rest of the Canucks. It was, after all, the team’s first game in ten days due to COVID-19-related postponements, and there was some considerable rust to shake off.
Still, the frustration in Pettersson was apparent.
Thursday’s loss to the two-time defending champion Tampa Bay Lightning was a different story.
Yes, the Canucks were still defeated to the tune of 4-2, and yes, Pettersson went pointless and -1. But the stats don’t paint an accurate picture of what was truly one of Pettersson’s most dominant games of the season.
In just 10:07 of 5v5 ice-time against Tampa and now playing left wing instead of center, Pettersson posted an outrageous advanced statline of 77.27% Corsi For, a 75.96% xGF, an 80% control of scoring chances, and an 80% control of high-danger chances specifically. He played a further six minutes and change on the power play, generating several more chances and narrowly missing on a few shots, but was not able to convert.
Advertisement
Ad
Advertisement
Ad
Again, the frustration in Pettersson was visible, but this was a different brand of frustration. This was the frustration of coming damn close, and not quite being able to pull it off.
If Pettersson was hoping to build on that momentum, however, the Saturday morning matinee against the Carolina Hurricanes had other ideas.
It was, on the whole, another pointless night with a -1 on Pettersson’s record. It wasn’t a bad night, necessarily — Pettersson still put up an xGF of 65.68% despite starting only 25% of his shifts in the offensive zone — but it definitely wasn’t a fun one, either.
At one point, Pettersson got smacked in the nose by the flying blade of teammate Vasily Podkolzin, barely avoiding a serious injury.

Scary moment as the skate of Podkolzin catches Elias Pettersson up high in the visor/face. pic.twitter.com/nVjKrHkKYu

Advertisement
Ad
Advertisement
Ad
On a subsequent play, Pettersson lost his own stick on a shot attempt, and was then dumped into the boards by a late poke check attempt by the Carolina netminder. Pettersson’s exasperation in that moment spoke volumes — it was more than an embarrassing moment, it was emblematic of everything Pettersson had been going through all season long.

But moments of frustration and embarrassment are a part of life, and it’s really what we do in the wake of them that matters. And in the case of Elias Pettersson, he really came out on Sunday morning determined to do something meaningful.
From the get-go, the Pettersson who stepped on the ice against the Capitals looked like a different player than the one who’d been skating around in the 37 games prior. Again, his advanced stats were stellar, and Pettersson continued to drive play from the left wing.
Advertisement
Ad
Advertisement
Ad
But this time, he was rewarded for it.
The first goal came on the power play, as Pettersson held the puck patiently, waiting for Martin Fehervary to slide out of position, and then took two steps toward the slot before ripping it home.

Pettersson with some ✨patience✨

It was cathartic, but it wasn’t just cathartic. It almost looked like vintage Pettersson.
The confidence gained from that singular play seemed to stick with Pettersson all night. His second goal of the game came after he cleverly and intentionally banked the puck off Ilya Samsonov from behind the goal-line.

It’s a neat trick, and it’s also the kind of thing that one suspects Pettersson might not have even tried earlier in the year. The confidence to improvise creative plays is the bread-and-butter of Pettersson’s uniqueness, and that confidence has been decidedly lacking.
Advertisement
Ad
Advertisement
Ad
But the great thing about mentality-related problems like confidence, frustration, and snakebittenness is that they can sometimes turn themselves around in the blink of an eye. That’s what makes what Pettersson accomplished here so important.
He gained some momentum playing against the best team in hockey, even though he wasn’t rewarded for it. He then attempted to carry that forward into the Carolina game, only to be sideswiped by issues largely outside of his control.
That’s a maddening experience in what has been a maddening year, but Pettersson did not let it get him down. Instead, he showed resilience, got right back on the horse the very next morning, and put together his single best performance of the 2021/22 season.
He maintained his momentum clean through a Saturday game that was a real kick in the teeth, both figuratively and literally.
Advertisement
Ad
Advertisement
Ad
He pushed through, and came out the other side stronger for having done so.
The 2021/22 season is still going to have some ups and downs for Pettersson from here on out. Don’t expect him to start potting two goals a night on a regular basis. Clearly, there’s still some work to be done in order to fully rebuild his game.
But if he can keep fighting through the downs, and pushing to make the ups a more regular occurrence, he’ll get where he needs to be eventually.
Sunday’s game against Washington Capitals wasn’t the be-all and end-all of the Pettersson restoration.
But it was a damn good start.