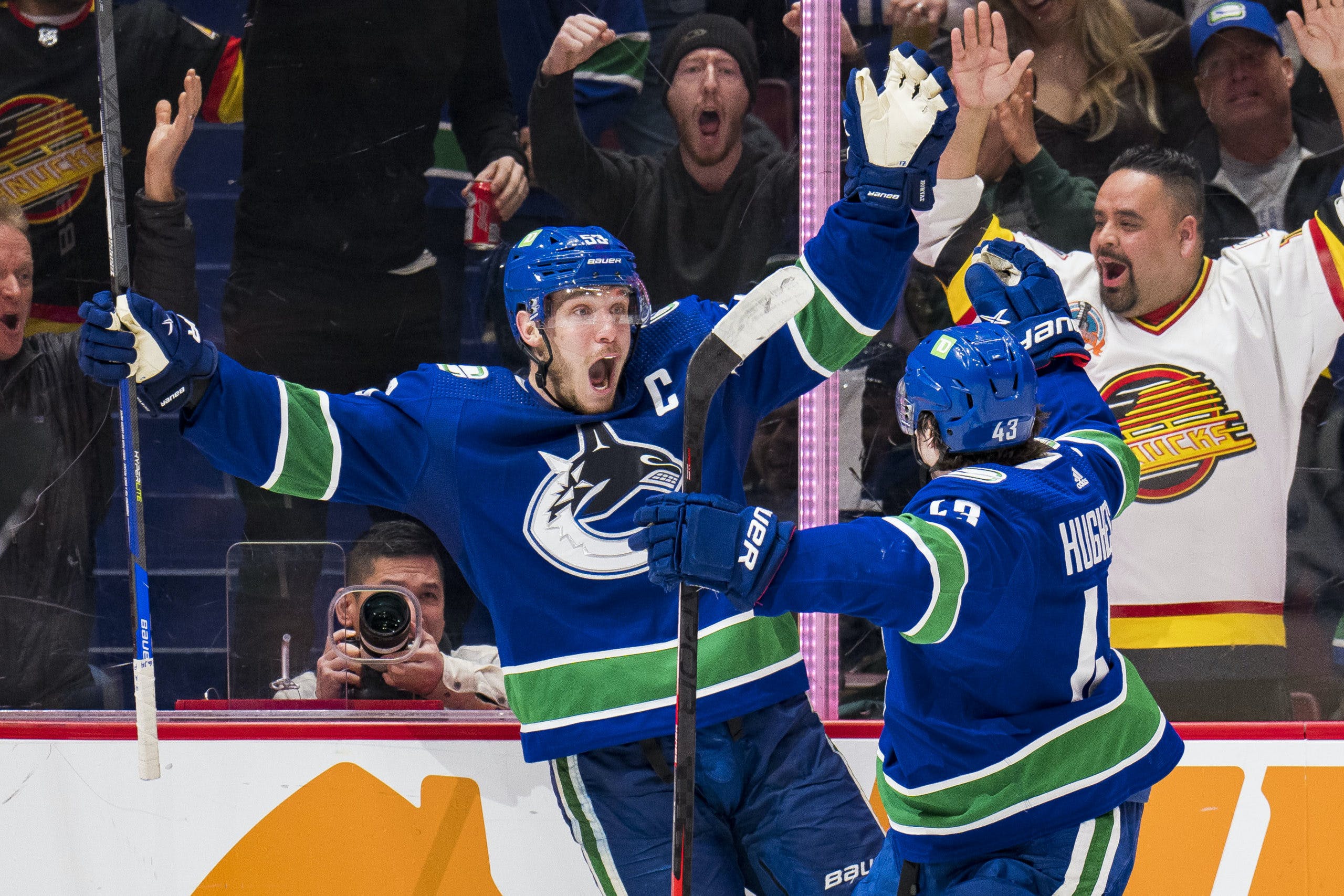 Photo credit: © Bob Frid-USA TODAY Sports
By Michael Liu
10 months ago
Comments
It’s a pretty good time to be watching the Vancouver Canucks. Bruce Boudreau has breathed new life into the franchise, going on a 21-8-5 run since December 6th. Along with the change behind the bench has come sweeping overhauls of the front office, with a new face in nearly every position.
On the ice, the Canucks have been a much more entertaining product as well. Though not immune to old habits, they’ve definitely looked a lot more like the team that was expected to outscore all their defensive woes. Of course, getting some stellar goaltending from Thathcer Demko has helped cover up many flaws.
Vancouver now sits 2 points out of the last wild card spot with three more games played than Dallas and 3 points back of the Golden Knights with a game in hand. With Vegas slumping and Edmonton spinning their wheels, there’s no time like the present to charge into the playoff race, something that’s been sorely missing in this market.

dear canucks fans,
it appears your team was missing one (1) point from my simulations somehow and your playoff odds this morning are slightly higher. that has been rectified and we apologize for the error. those responsible have been banished to the shadow realm pic.twitter.com/mBrwsWeAf1

However, the Canucks have also played themselves into an uncomfortable situation. Their surge has largely flipped the script from the start of the year but has also made the direction of this team a lot harder to discern. The old adage of anything can happen in the playoffs is true. Just as much, stacking the odds in your favour is much better than banking on an underdog run to the cup.
Advertisement
Ad
Advertisement
Ad
So are the Canucks ready to compete? Objectively speaking, this roster is flawed in its construction. It’s potentially the greatest accumulation of young talent in franchise history, yet it’s weighed down by contracts that limit the ability to be flexible and improve. There’s not much that can be done about the glaring holes on the right side of the defence, or a reliable left-handed defenceman that doesn’t cost $7 million a year. Little assets remain both in the prospect cupboard and draft pick stash.
It’s a far cry from the abundance of riches that the heavyweights of the league possess. The Avalanche can roll four lines to bury you in offense, while teams like Tampa or Florida can drown you in depth. If Vancouver makes it into the playoffs, chances are that they’ll have to face one of these teams early thanks to their rough start. And if they do, it might not be very pretty.
Advertisement
Ad
Advertisement
Ad
Are the playoffs just going to cause harm to the Canucks in the long run? Especially if they bow out early with nothing to show, it becomes the argument of a lottery pick against playoff experience, one of which is hard to assign a value to. Whereas a lottery pick is something that is tangible, the aspect of the playoff intangibles is hard to measure, if at all. Players like Jay Beagle were heralded for their cup experience but it never seemed to translate to sustained success with the Canucks. For a team that has only experienced the bubble playoffs of 2020, it is difficult to imagine exactly what difference making the playoffs this year will do for the club.
With the trade deadline rapidly approaching, this dilemma has to weigh heavily on the front office. Do they buy or sell? It was a much easier decision to make back in November, but now, there are a lot more factors feeding into it. Does management show that they have faith in the team, or do they make the tough decisions for short-term pain and long-term gain?
Advertisement
Ad
Advertisement
Ad
It’s not as easy as it sounds as well. Looking back to the 2020 offseason, much was made about the Canucks losing key players and figures in the dressing room. It showed on the ice with the disaster that was the 2021 year. Arguably, if Vancouver were to become sellers at the deadline, it would crater the morale of a group that has already been through this spin cycle once before.
Not to mention the tough task of being sellers means finding teams to trade with and for the right price. JT Miller is probably the most alluring figure with the most trade rumours surrounding him, but is there realistically a team that would both want him and have the pieces to acquire him without damaging their core? With how well Miller has played, how indispensable he’s been for the team on and off the ice, what sort of message would trading him send to the rest of the room?
Advertisement
Ad
Advertisement
Ad

GM Patrik Allvin is rightfully holding out for a king’s ransom, one that he probably won’t get. A team like Colorado could very well use Miller, but the pieces they’re sending back will probably be underwhelming compared to his current perceived value. The Rangers have many appealing prospects and picks, but will they be willing to part with them for a good shot at a cup run? It’s very hard to say, and that’s for Miller alone. With talk swirling around Boeser, Motte, and even Conor Garland, there’s always something that is being proposed as a possible trade.
In the case that Vancouver does look to sell, then they would have to look for pieces that can contribute within the next four years. At that point, Horvat will be 30 years old and Demko’s team-friendly deal is up as well. Is that something possible especially if they’re only recouping late first-round draft picks? Will teams give up players that are this close to being full-time, high-level contributors in the NHL? As well, a discussion has to be made about moving on from the established core if the Canucks continue to be mediocre by then.
Advertisement
Ad
Advertisement
Ad
Buying at the deadline doesn’t appear to be viable either. It’s hard to envision any team giving up significant value for what the Canucks have to offer. If they were to part with Myers, for example, Vancouver would have to add a lot more to sweeten it, and would also be trading for assets that might not make the immediate impact they need. And with little draft picks and even fewer NHL-potential prospects, it may be wise to hang onto what is left.
The worst possible outcome of this strange no-mans-land is indecisiveness. Just look at the Flyers, who’ve flipped from retool to rebuild to contending more often than Michael Scott’s gotten vasectomies. It’s a mishmash of ideas that don’t coalesce, from aggressive trades to bringing in contending talent before preaching patience for a rebuild. It’s also how they bought into the idealized image of Rasmus Ristolainen at $5.1 million a year.
Advertisement
Ad
Advertisement
Ad
Hey, that kinda sounds familiar.
The Dan Hamhuis non-trade. Not admitting the team needed a rebuild. Nate Schmidt for a year then takes backsies. Erik Gudbranson. Loui Eriksson. Rebuilding, then not rebuilding, then having one of the worst years in franchise history.
Canucks fans are well familiar with their own brand of indecisive purgatory. It’s what has led up to this point. Rutherford and the team he has brought in have been quiet in terms of the transaction front, not making moves just for the sake of making them. It’s somewhat of a relief, but it also leads to some intrigue. There is no way to gauge their outlook on the team simply because they haven’t done anything to indicate what it is.
Perhaps this push is what management is evaluating them on. Holding their cards close to their chest is something that’s also been missing in Vancouver. Being quiet at the deadline might not necessarily indicate indecisiveness, but perceptiveness to see what exactly the Canucks are in this limbo. A run to the playoffs might not be so bad either, helping them identify key pieces and differentiate between players that can be moved on from. It also gives them a summer to really set the tone, a draft and free agency period to shape the team in their image.
Advertisement
Ad
Advertisement
Ad
For the Canucks, the end goal has always been the Stanley Cup. To reach it, a team has to be nearly perfect, with no holes in any part of the lineup. The first step will be to achieve sustained success. Then, and only then, can the Canucks aspire to be true contenders. Right now, at least on paper, there’s still yet a ways to go. That being said, we live in the here and now. Vancouver is on a good run of form. Why not enjoy it?
After all, in the words of Herm Edwards, the greatest thing about sports is that you play to win the game.