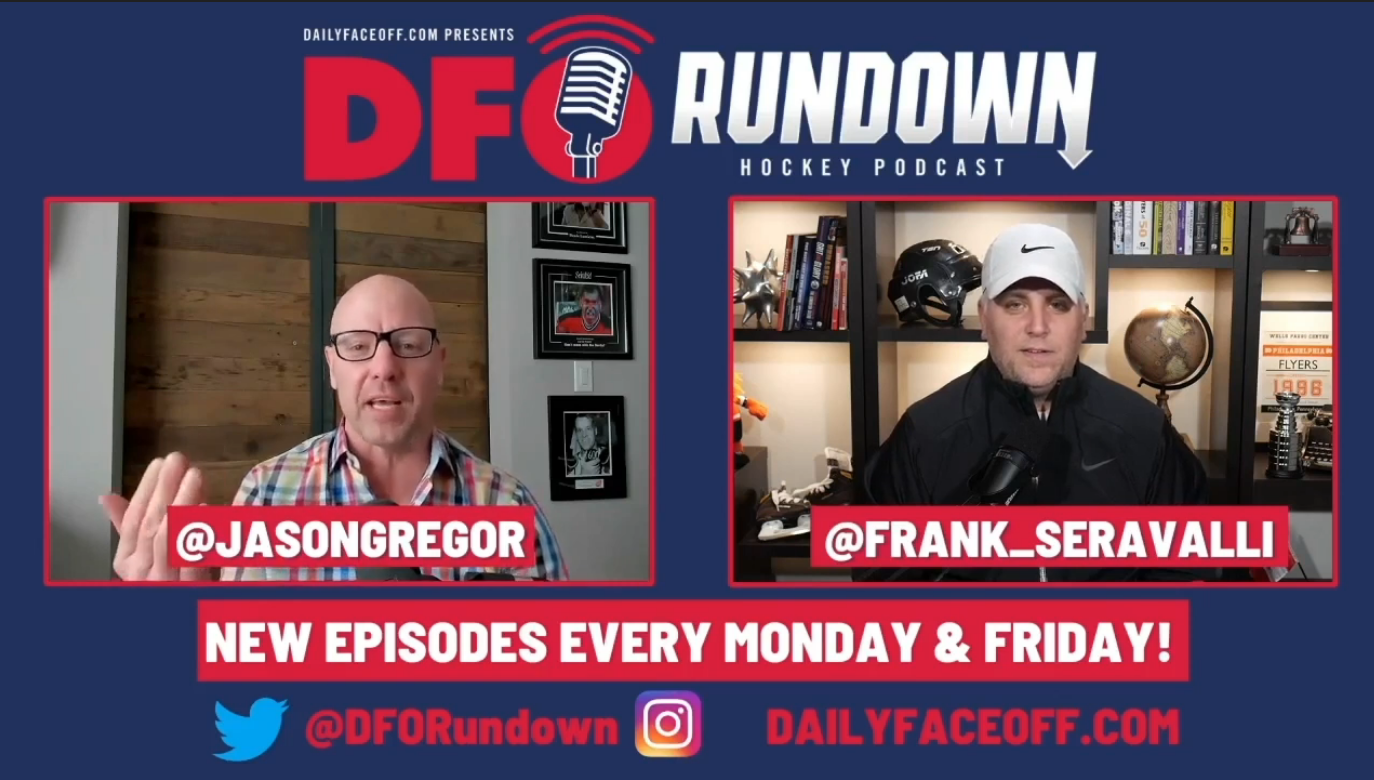 By Zach Laing
1 year ago
Comments
Provincial health authorities across the country are watching the NHL’s COVID-19 situation “with a hawks eye,” Frank Seravalli said on The Nation Network’s DFO Rundown podcast Monday.
The comment came when co-host Jason Gregor asked if the league’s latest set of protocols to prevent the virus’ spread would work:

Jason Gregor: We’re going to welcome back some teams to the National Hockey League this week. The Sabres are coming, New Jersey is coming, Minnesota — you haven’t seen them in a while. For a brief time maybe people through COVID was coming to the North Division. Jesse Puljujarvi had an inconclusive test on Thursday, he didn’t play against Montreal. Mikko Koskinen was held out as a close contact. Puljujarvi then had three consecutive days with negative tests, he’ll be playing tonight against Winnipeg. They took overprecaution, which I agree with doing, but do you think we’re going to see another run of teams here where we have four or five teams out of action, or do you think the new protocols are going to help?
Frank Seravalli: I hope not. I hope the protocols that are in place and as they begin to roll out some rapid testing for the North Division, which they hadn’t really to this point. The NHL has gone through this process, these docking stations, it’s a funny term. You’re like “what the heck is a docking station?” but it’s a little pharmaceutical device that processes the test. The league needs more than 500 of these — 22 per team is their goal to roll out. They’ve got a very limited number they’ve gotten to all 24 U.S. teams where they can rapid test, but not nearly enough where they can do the whole team, staff and personnel, it really would just be limited to players at this point.
The goal is to get rapid tests in the hands of all these 31 teams so that they can do it on gamedays in addition to the normal tests they do that’s way more accurate that takes 24 hours, or 18 hours to get back. It wasn’t working — there was a hole in the NHL’s testing protocol and that’s my opinion saying that. If you take a test in the morning and you don’t get results until the game is over what’s the point in doing it? The league’s response, my guess would be “well, there’s an incubation period that exists before that test exists where players are contagious and they’re not showing up as positive.
In this case, that doesn’t make much sense to me. If you test in the morning and get the result after the game, and you know that player is positive, they wouldn’t be allowed to participate in the game and they would be forced to sit out and you’d have a chance to stop the spread. I think that’s the idea — it’s to stop the spread. The fact it hasn’t really gotten going yet in the North Division is a huge sign for the league. That would really grind, I think, things to a hault with the provincial health authorities who are watching this with a hawks eye.

Here’s what else they talked about:
3:00 – Frank & Gregor talk about the Canucks Owner’s recent tweets
5:00 – They go more in-depth on the Canucks struggles
7:00 – Could some Head Coaches test the free-agent market?
9:00 – Recent news around COVID in the NHL
11:25 – A great ‘Frankly Speaking’ as Frank goes off on whether or not it’s time for big changes in Nashville & San Jose.
17:00 – Interview with Tyson Nash!
18:30 – The Coyotes recent schedule
21:00 – A good take on Tochett & his work as Coyotes HC
30:40 – Nash’s transition into media
Zach Laing is the Nation Network’s news director and senior columnist. He can be followed on Twitter at @zjlaing, or reached by email at [email protected]
Advertisement
Ad
Advertisement
Ad