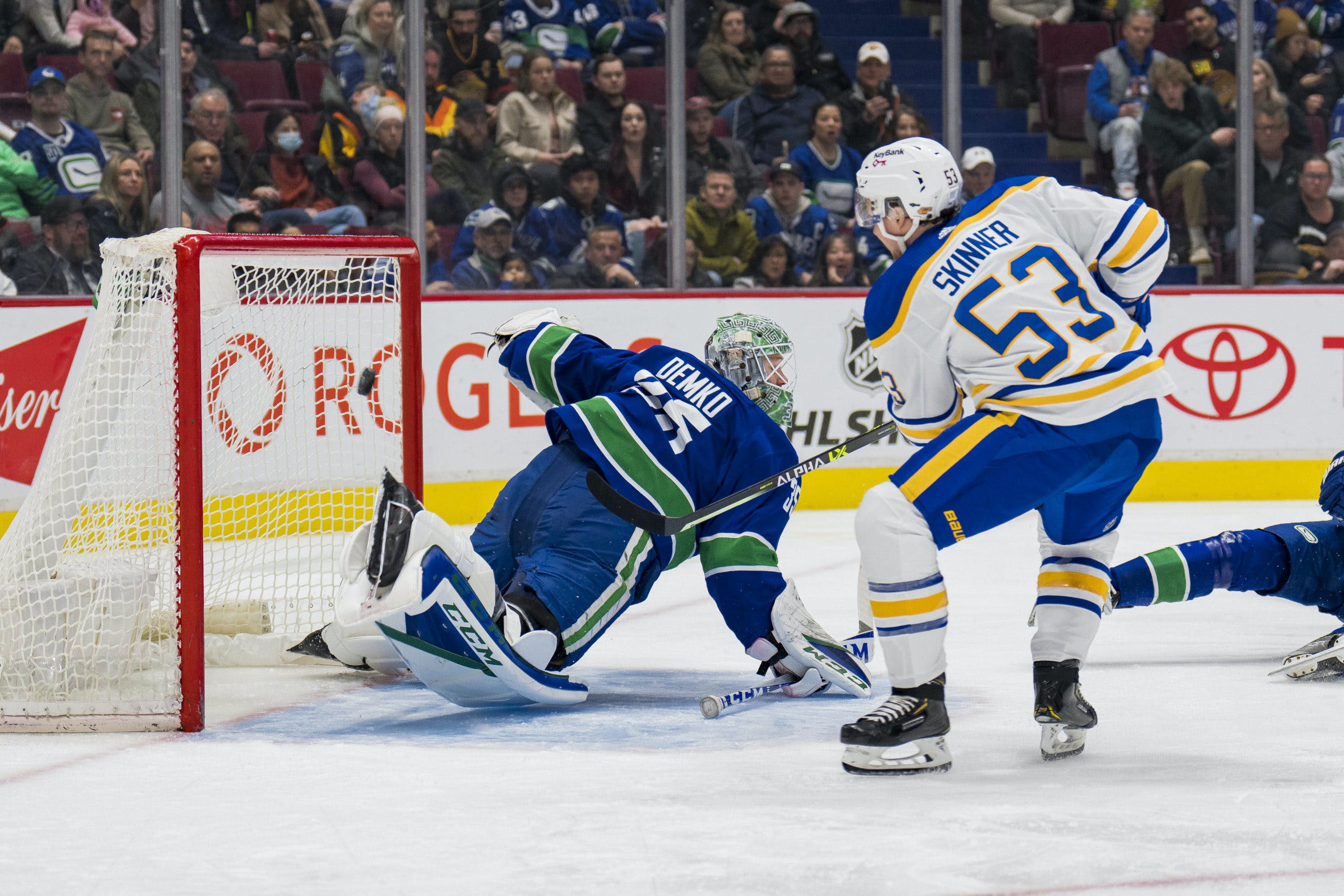 Photo credit: © Bob Frid-USA TODAY Sports
By David Quadrelli
8 months ago
Comments
After a busy day right before the Monday Trade Deadline in which the Vancouver Canucks shipped out Travis Hamonic and shipped out his contract and gained Travis Dermott as a result, the team had a game to play!
It was a demoralizing and crushing defeat 24 hours prior when the Calgary Flames, in essence, delivered what certainly felt like the final blow to the Canucks’ improbable playoff hopes.
But it ain’t over till it’s over, and we’re still going to be giving you wall-to-wall coverage of this team until all is said and done.
So with that in mind, let’s get into this game.

The Canucks didn’t have morning skate, and head coach Bruce Boudreau held his cards close to his chest, so there were many questions that remained unanswered heading into tonight’s game.
Advertisement
Ad
Advertisement
Ad
Namely, if the Canucks would hold any players out of their lineup due to an imminent trade.
The answer was no.

Thatcher Demko started for the Canucks, Craig Anderson for the Sabres.

As they so often do, the Canucks had a slow start.
They gave up four shots before getting even one themselves, and the Tyler Myers-Oliver Ekman-Larsson pairing was on the ice for yet another even-strength goal.
Casey Mittelstadt broke in after a turnover in the Canucks’ end and ripped the puck past Demko. 1-0 Sabres.
For a pairing that has been extremely effective for the Canucks this year, the OEL-Myers pairing has taken a drop recently that has been somewhat staggering.
Advertisement
Ad
Advertisement
Ad
The Canucks found their legs a bit after the goal, but that really isn’t saying much.
They were still slow, sloppy, and continuing to look like the worst version of themselves that we’ve seen since Bruce Boudreau took over as head coach.
Brad Hunt took the first penalty of the game when he got called for interference just before the halfway mark of the period, and Buffalo’s power play personnel hopped over the boards.
The Canucks’ penalty killers did a good job of keeping the Sabres at bay and clearing the puck whenever they got the opportunity to do so, and escaped unscathed.
The Sabres kept up the pressure back at evens and the first period ended up being nothing more than yet another stark and painful reminder of where this team is actually at.
Advertisement
Ad
Advertisement
Ad
Miller drew a penalty with just 34 seconds remaining in the first, and the Canucks’ power play got their first chance of the game.
In the short time they were on the ice, the first unit actually generated a few quality chances, and looked to build on that momentum going into the second.
That being said, the story of the period was certainly the Canucks’ slow start.
“Our starts have gotten us behind the eight ball a little bit,” said Luke Schenn. “There’s been some inconsistencies from a handful of guys. This time of the year, things get way harder. You can’t expect to play an easy game at this time of the year.”

The first unit started the second, but the most dangerous chance they had was an Elias Pettersson wrist shot from the point that was tipped wide by Brock Boeser.
Advertisement
Ad
Advertisement
Ad
Back at even strength J.T. Miller scored after a nice move to the forehand after protecting the puck on his backhand on the rush.

Miller fooled us all. 😂

1-1 after Miller’s 25th goal of the year.
Conor Garland got into a skirmish after the whistle and he and Dylan Cozens were given offsetting roughing minors to send this game to four on four action.
Jeff Skinner appeared to score after a turnover in the defensive end by Tyler Myers and made it 2-1 Sabres.
But wait! The Canucks felt Buffalo was offside and challenged the play.
Unfortunately, there wasn’t enough evidence to overturn the call, and it stood, which meant the Canucks were assessed a delay of game penalty.
Advertisement
Ad
Advertisement
Ad
The Canucks got another power play opportunity when Skinner took a hooking penalty.
Bo Horvat quickly converted from his spot in the bumper position after J.T. Miller passed him the puck from along the boards. 2-2.

Captain ties it up on the powerplay. 💪

Before the period came to a close, Thatcher Demko made an absolutely outstanding save off of Zemgus Girgensons.

After 40 minutes of play, this one was tied, with the shot total reading 23-20 in favour of the Sabres.

Vasily Podkolzin created a good chance early after making a power move from behind the Buffalo net and attempting to jam the puck past Anderson.
Advertisement
Ad
Advertisement
Ad
Bo Horvat shifted his way through the offensive zone and hit Brock Boeser with a tape-to-tape pass after creating space for himself.
Boeser loaded up and shot far side on Anderson, but the Buffalo goaltender was up to the challenge.
Conor Garland had the next great Canucks chance, but again, couldn’t beat Anderson.
The Canucks were given a power play with just under five minutes remaining and a golden opportunity to break the deadlock.
Horvat tipped a Quinn Hughes point shot and that was the Canucks’ best chance of the man advantage, but ultimately, they couldn’t break through.
As time dwindled down on the clock, there was one last strong J.T. Miller move to the net in regulation that led to a mad scramble in front of Anderson as both teams looked for the loose puck.
Advertisement
Ad
Advertisement
Ad
This game would need overtime to find a winner.

If there’s one thing you can usually say with confidence about the Canucks, it’s that they’re very fun to watch in overtime.
The 3-on-3 format greatly benefits the Canucks’ top gunners, especially Elias Pettersson and Quinn Hughes, who are puck-possessing machines, but they, unfortunately, didn’t even touch the puck tonight in OT.
And really, we can’t think of a better metaphor for the current state of this team than that — looking deflated and completely out of sorts in a situation they’re usually exceptional in.
3-2 Sabres final.
It was yet another game where this Canucks team has a slow start and struggles to answer why.
“I don’t want to say the word embarrassing, but it’s hard to swallow,” said J.T. Miller post game.
Advertisement
Ad
Advertisement
Ad
The Canucks head out on the road after failing to help themselves out in their quest for the playoffs, and will play next against the Colorado Avalanche on Wednesday.