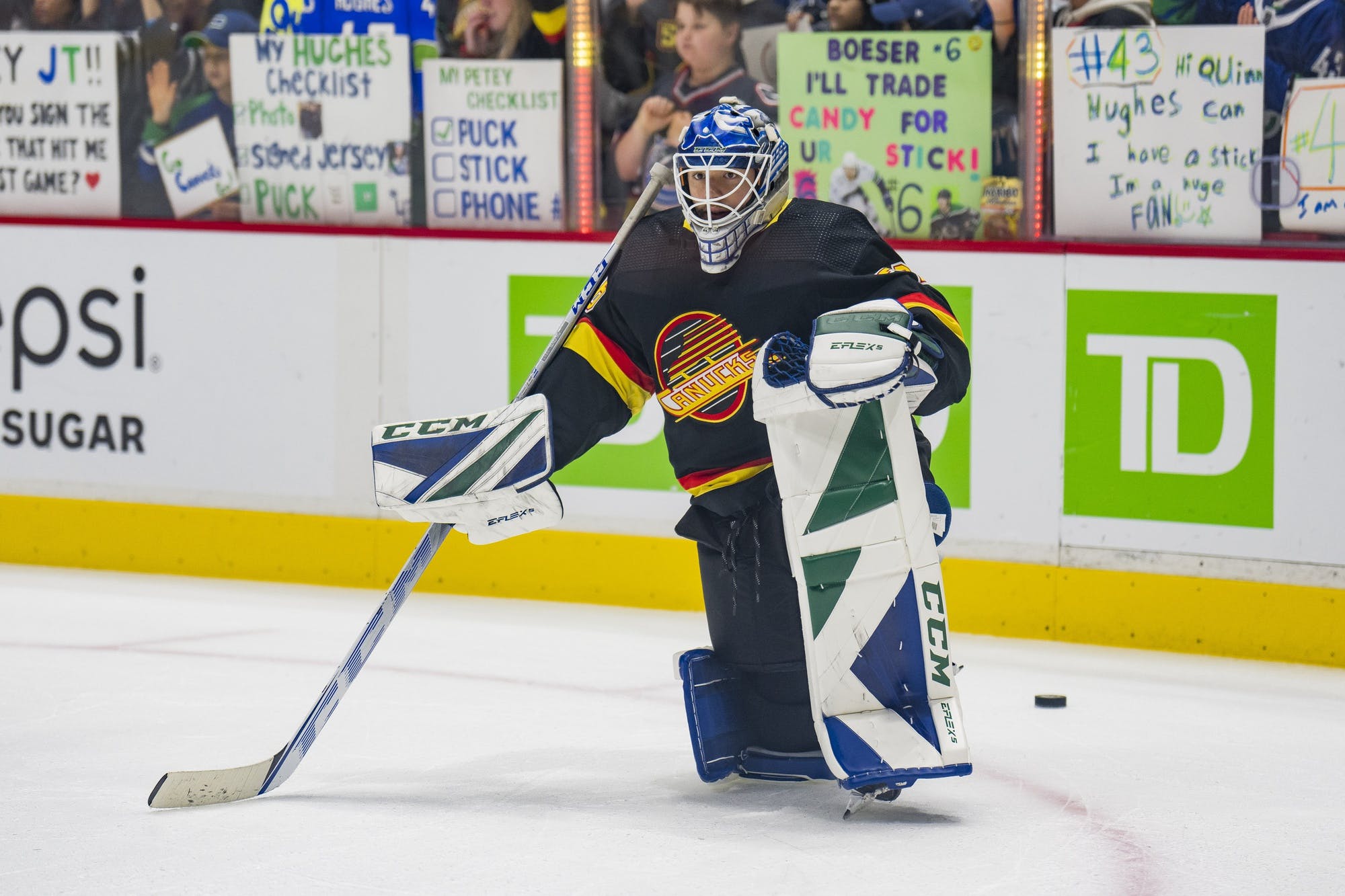 Photo credit: Bob Frid-USA TODAY Sports
By Stephan Roget
17 days ago
After a three-year hiatus, the Young Stars have once again descended upon Penticton, BC.
Except, according to some pundits, it’s only the Calgary Flames, Edmonton Oilers, and Winnipeg Jets that are truly living up to the tournament’s title.
The host Vancouver Canucks, on the other hand, have long been recognized as having a lower-end prospect pool, and have iced what appears to be a especially lacklustre roster with most of their best prospects already overseas or in college.
And yet, the young players that the Canucks have put on display in Penticton are also serving as a pretty potent reminder that presaging the quality of hockey prospects is an all-but-impossible endeavour.
Advertisement
Ad
Advertisement
Ad
Each year, full reviews are available within hours of the conclusion of the NHL Entry Draft. This year in particular, the Canucks were criticized for what many amateur scouts saw as a questionable set of selections. But while each player picked obviously starts out with some inherent value, it’s what happens afterward that is far more important. It’s the development that counts, and that development is rarely ever linear or predictable.
Fans of the Canucks definitely understand this truth from a pessimistic angle. They’ve seen enough Olli Juolevis and Hunter Shinkaruks and other such unmentionables to know that all the draft pedigree in the world can’t save a prospect from a flattened developmental curve.
Advertisement
Ad
Advertisement
Ad
But the preseason is the season of optimism, and that truth also works in the other direction.
Take Arturs Silovs, for example.
And while you’re at it, take Mike DiPietro, too…please?
On Friday night’s tournament-opening matchup for the Canucks, site-favourite Silovs put up 24 saves in a shutout performance. Coming hot off the heels of a strong showing for Team Latvia at the World Championships — during which Silovs clearly outshone NHL starter Elvis Merzlikins — this shutout only further establishes Silovs as the top goaltending prospect in the Canucks’ system.
But that wasn’t always the case.
Silovs was drafted in the sixth round of the 2019 Entry Draft at 156th overall. He’d just wrapped up a season split between the top Russian junior league and the top Latvian senior league, and was considered to be a fairly raw talent — as well as a definite longshot.
Advertisement
Ad
Advertisement
Ad
Contrast that with DiPietro, picked two years before Silovs and much earlier, going 64th overall in 2017.
By that point, DiPietro was already a star for the Windsor Spitfires of the OHL. A year later, he’d be starring for Team Canada at the World Juniors. By that point — the same point at which the Canucks drafted Silovs — DiPietro was considered one of the best goaltending prospects in the world, never mind the Canucks system.
If their development was linear from there, DiPietro would have pushed his way onto the NHL roster right now and Silovs would have been long forgotten about. Yet their circumstances in 2022 are almost exactly the opposite.
Advertisement
Ad
Advertisement
Ad
In the 2019/20 season, DiPietro played 36 games for the Utica Comets while Silovs played 36 for the Barrie Colts. Then, the pandemic hit, and both seemingly lost a full year of development.
DiPietro got stuck on the taxi squad and wound up playing only four games for the Comets in 2020/21. The Canucks couldn’t find anywhere for Silovs to play, either, and he wound up playing a grand total of seven games; six for two different Latvian teams and one for the Manitoba Moose on loan.
When the 2021/22 season kicked off, getting DiPietro’s development back on track was clearly a priority. He got 34 starts for the Abbotsford Canucks, but he struggled noticeably, and seemed to be greatly hampered from his near-year off. Eventually, he lost the AHL starting job — and the opportunity to become Thatcher Demko’s backup — to Spencer Martin.
Advertisement
Ad
Advertisement
Ad
Silovs, on the other hand, was shuffled between the AHL and ECHL all season as a minor league third-stringer. But it was he, not DiPietro, who rebounded best from that season of idleness. Silovs got in ten games for Abbotsford, ten more in Trois-Rivieres, and then was off to dominate the World Championships.
By the end of it all, he’d clearly surpassed DiPietro, who is now the de facto third-stringer in Abbotsford (if he’s not traded, that is).
Suggesting this would come to pass in 2019, when Silovs was drafted, would have been foolhardy. Suggesting it would come to pass at the outset of last season would have been heavily criticized.
Advertisement
Ad
Advertisement
Ad

But it’s September of 2022, and it has come to pass. Neither prospect’s development was linear, nor was it predictable. It just…happened that way.
Another Canucks youngster currently starring in Penticton offers another perfect example of this principle. Linus Karlsson picked up an assist on Friday’s game-winning goal and added an empty-netter to seal it. Of all the forward prospects the Canucks have brought to the tournament, Karlsson is probably the one most likely to see NHL game action this year.
Advertisement
Ad
Advertisement
Ad
But that wasn’t always the case. Far from it.
Karlsson was drafted 87th overall in 2018 by the San Jose Sharks. Then, in the midst of a middling Draft+1 year, the Canucks acquired his rights in exchange for Jonathan Dahlen — and it was kind of a big deal, at least at the time.
Dahlen, the son of a former NHL star and the 42nd overall pick in 2016, looked well on his way to big league success. He’d torn apart the Allsvenskan as a teenager for two years running, and then come over to the AHL to post impressive numbers as a rookie pro. The Canucks liked him enough to trade franchise icon Alex Burrows for him, which made it all the more controversial when they then turned around and flipped Dahlen for Karlsson — a prospect who appeared destined for mediocrity.
Advertisement
Ad
Advertisement
Ad
Flash-forward, again, to the present day. Where’s Dahlen? After several attempts to stick with the Sharks — and a couple of overseas interludes — he’s right back where he started, starring for Timra of the SHL on what sure seems like a permanent basis.
Karlsson, on the other hand, just ripped that same SHL a new one, breaking Elias Pettersson’s rookie records in 2021/22 with 26 goals and 20 assists through 52 games.
Now, he’s in Penticton, putting up points and earning his way ever closer to what now seems like an inevitable NHL opportunity.
Nobody says much about the controversial trade anymore.
Advertisement
Ad
Advertisement
Ad
Such examples are all over the Canucks Young Stars roster.

Arshdeep Bains on the scoresheet for the Canucks–definitely a moment that won't be forgotten for number 80.@ToyotaPacific | #Canucks pic.twitter.com/GWIC0FWlu9

That aforementioned game-winning goal on Friday was scored by Arshdeep Bains, who went through multiple NHL Entry Drafts without being selected before exploding into the WHL’s leading scorer last season.
Tristen Nielsen, who scored the Canucks’ second goal, and Chase Wouters, who centered their top line, are two players who haven’t even earned an NHL contract yet, but they each outperformed multiple NHL draftees on Friday.
Advertisement
Ad
Advertisement
Ad

Their stories bring to mind that of the aforementioned Burrows, who worked his way up from a stint as an undrafted junior defender into an ECHL contract into an AHL contract into a spot on the Canucks’ top line next to two Hall of Famers.
It wasn’t linear, and it sure wasn’t predictable. It was just development.
And that’s important to keep in mind when viewing prospects, either at this tournament or throughout the season to come. Don’t get too high on a prospect who is crushing it at a lower level, but don’t get too down on someone who is struggling, either.
Advertisement
Ad
Advertisement
Ad
The simple fact is that, until a prospect actually reaches the quality of an NHL player, there are just far too many possibilities, circumstances, and, yes, “what ifs,” to sort out to ever make a truly accurate prediction.
That’s why the only prospects that can ever really be fairly prognosticated are those rare exceptions that show up already NHL-ready.
The rest are nothing more than potential Young Stars, working for their chance to shine.