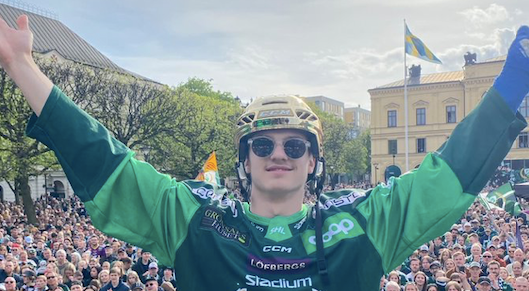 By Faber
6 months ago
Comments
Lucas Forsell has had a heck of a year since the Vancouver Canucks called his name with the 201st selection in the 2021 NHL Entry Draft.
Lucas Forsell is still only 18 years old and has already developed at an accelerated pace. This season, Forsell was nearly a point per game player in the J20 Nationell league as he posted 34 points in 35 games with Färjestad’s U20 team. His play in the top Swedish junior league was impressive but the more impressive stat is the 30 games played that the 18-year-old had in the SHL this year.
There’s a bright future for the young Swedish winger, who has been given chances with Sweden’s U20 team this year as an 18-year-old. He is eligible to play in this summer’s World Junior Championships and feels like he will surely get a chance in December at the 2023 World Juniors.
Advertisement
Ad
Advertisement
Ad

Dropping down to the J20 circuit for the day, Lucas Forsell notched three goals.

He's now firing at a 0.97 clip in the J20 with 15 goals and 18 assists. The value continues to be terrific. #Canuckspic.twitter.com/yL3Ml1RosP

Forsell fractured his thumb in a U20 friendly game and unfortunately missed the entirety of the SHL playoffs but was able to be with the SHL team for their playoff run.
It is too bad because Forsell was just beginning to play regular minutes in the SHL and was doing a great job transitioning the puck out of the defensive zone. Forsell finished the season with a 52.6% Corsi. That’s the third-best CF% on his SHL team Färjestad BK, a team that finished the year with a 48.8% CF%.
Advertisement
Ad
Advertisement
Ad
He scored four goals on the year and is likely to have a bigger role next season after inking a two-year contract at the midway point of the season.

The opportunity to be around his SHL team as they went on a tremendous run to the championship is good to hear. It’s too bad that he wasn’t able to contribute but having him around the winning team sets up an exciting 2022-23 season for the young winger.
Forsell will continue to rehab his thumb with hopes of getting a call to play with Sweden in August. At this point, making Sweden’s U20 team for the summer world juniors is a bit of a long shot but Forsell really looked like he took big steps in his game this season and is definitely on Sweden’s radar.
Advertisement
Ad
Advertisement
Ad

Had a Swedish friend send me this epic picture of Canucks prospect Lucas Forsell celebrating an SHL playoff championship.

It’s great for Forsell to see and learn what it takes to become a champion. Good sign of development for him over in the SHL. pic.twitter.com/dPYoFn6IG4

Right now, the kid is celebrating being a champion and this Canucks team needs more winners in their prospect pipeline.
Expect to see big things from Forsell over the next two years as he works his way up Färjestad’s depth chart. Forsell is always moving his feet, has improved his shot and continues to be an excellent playmaker in the offensive zone.
We continue to be impressed by the value of this seventh-round pick.
More from CanucksArmy:
Advertisement
Ad
Advertisement
Ad