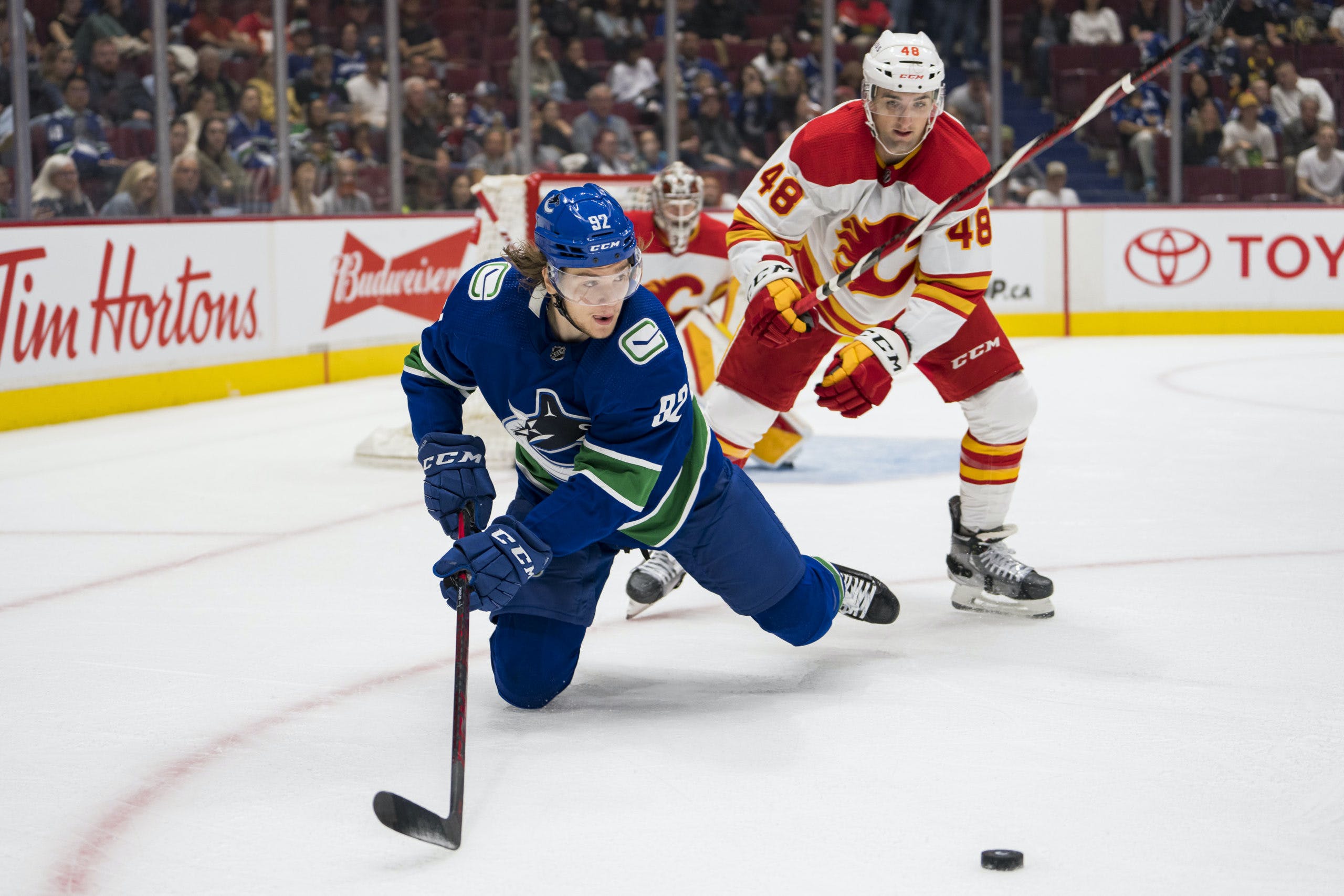 Photo credit: © Bob Frid-USA TODAY Sports
By David Quadrelli
2 months ago
Comments
The Vancouver Canucks played two games tonight, and we’re going to do our best to get you all the things you’d want to see/know about from both.
Both games resulted in losses at the hands of the Calgary Flames, but one was closer than the other.
Let’s start with that one.

Folks, we think Vasily Podkolzin might just make the team.
The 21-year-old Russian, who’s preparing for his sophomore season with the Canucks, scored the first preseason goal of the club’s season tonight in Vancouver.
The Canucks in Vancouver were getting shutout through two periods of play, but eight minutes into the third and final frame, Podkolzin opened the scoring for the Canucks after taking a pass from Tyler Myers and showing the kind of confidence that fans saw flashes of last season.
Advertisement
Ad
Advertisement
Ad

An honest to goodness #Canucks goal!

Vasily Podkolzin with a beautiful solo effort to cut the Flames lead to one in Vancouver. pic.twitter.com/6TigC6l6p4

In his rookie season with the Canucks, Podkolzin tallied 14 goals and 12 assists through 79 games played.
The Canucks pulled their goalie late in the third and Conor Garland buried a hard cross-crease Elias Pettersson feed to tie things up and send the game to overtime. Andrey Kuzmenko picked up the secondary assist on the goal, his first with the Canucks.

Great cross-crease pass by Elias Pettersson to Conor Garland, and Garland tucks in his own rebound to tie it late in Vancouver. #Canucks pic.twitter.com/OQLbiG13mP

Pettersson looked good tonight. He was engaged at both ends, and earlier in the game, set up Kuzmenko with a back door feed on the power play that the Russian winger couldn’t make contact on.
Advertisement
Ad
Advertisement
Ad
The Canucks would go on to lose in overtime after Podkolzin was called for a phantom tripping call that put the Flames on the power play late. 3-2 Flames final.

A phantom call on Podkolzin, plus a few more Arturs Silovs game savers for you. #Canucks pic.twitter.com/bNzH3Bbfs6

Spencer Martin started this game for the Canucks and showed a little bit of rust when he was unable to find his post on the second Calgary goal. Arturs Silovs was impressive in relief in Vancouver, making multiple big saves, especially in overtime (as seen in the video above).
Silovs made 19 saves on 20 shots, and Martin stopped 23 of 25.

Now for the ugly one…

The Canucks certainly didn’t send their best players to Calgary.
In Vancouver, they had Elias Pettersson and Bo Horvat on their top two lines with the same linemates that they had during training camp in Whistler.
Advertisement
Ad
Advertisement
Ad
In Calgary, the Canucks’ projected fourth line of Dakota Joshua, Curtis Lazar, and Jason Dickinson served as their first line, while their second line consisted of Linus Karlsson, Nils Åman, and Nils Höglander.
The good news is, this gave the Canucks’ youngsters a chance to line up against NHL competition, but they were certainly at a disadvantage squaring off against players like Elias Lindholm, Jonathan Huberdeau, Tyler Toffoli, and more proven NHLers on the Calgary side.
Now for the bad news…
The Canucks didn’t appear like they had much of a chance at any point in this one with Calgary backup Dan Vladar manning the Flames’ crease.
Even after Calgary’s fourth-string goaltender Oskar Dansk entered the game, the Canucks didn’t look great.
The watered-down Canucks squad would go on to lose by a final score of 4-0.
Advertisement
Ad
Advertisement
Ad

The Canucks won’t have any more split-squad games for the rest of the preseason, and will be back at home when the Seattle Kraken will be in town on Thursday night.