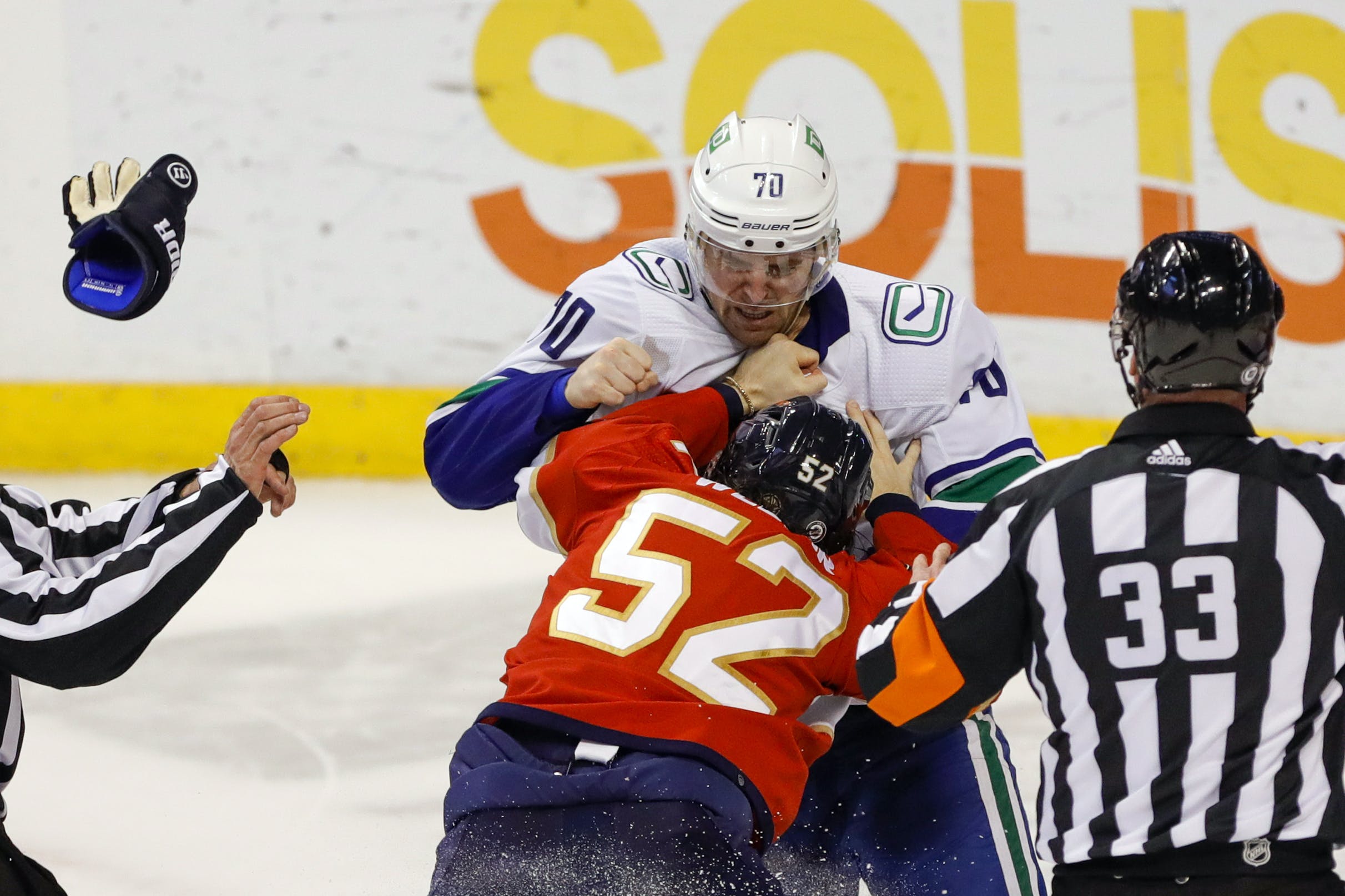 Photo credit: © Sam Navarro-USA TODAY Sports
By Lachlan Irvine
10 months ago
Comments
It felt like an eternity since the Vancouver Canucks last played a hockey game — or maybe only nine days — but Vancouver was back on the road for the first game of their most important stretch of the season, taking on the league-leading Florida Panthers in Sunrise.
Would the Canucks continue to defy all the odds? Would the Boudreau Boost live to see another day? Would Roberto Luongo abruptly grab an arena microphone and quit his special advisor role with the Panthers to become the next Canucks GM, WWE style? Only one way to find out!
Let’s go the line rushes.

Warmup lines for the #Canucks vs. @FlaPanthers

With the extended layoff, a few key changes brought the Canucks back to a more or less healthy lineup. Brock Boeser played alongside J.T. Miller and Vasily Podkolzin after missing the previous three games due to COVID protocol, while Matthew Highmore took over for Alex Chiasson, who entered protocols on Jan. 7.
Advertisement
Ad
Advertisement
Ad
Time to drop the puck at the FLA Live Arena, game on!

It didn’t take too long for the Panthers to draw first blood. Just over five minutes in Aaron Ekblad walked the blue line with the puck, dragging Elias Pettersson towards him and into Thatcher Demko’s lane of vision. Oliver Ekman-Larsson tried to box out Maxim Mamin at the lip of the crease, but ended up contributing to the sea of bodies in front of Demko as Ekblad ripped the shot. 1-0 Panthers.

From there the first ten minutes quickly unravelled. Just over a minute later, the Panthers worked the puck back up to the right side defencemen Radko Gudas, who put the shot wide as Sam Reinhart streaked into the slot. Reinhart executes a perfect deflection that Demko had absolutely zero chance on. 2-0 Cats, but not before J.T. Miller and Gudas get into a brouhaha.
Advertisement
Ad
Advertisement
Ad

The reason the fight happens at all is somewhat of a mystery, since Gudas didn’t appear to make any sort of controversial play prior to Miller challenging him. Pass it to Bulis’ Daniel Wagner might have the best explanation, a response to an Eetu Luostarinen hit on Tyler Motte, but Gudas ends up with the extra two minutes for ripping off Miller’s helmet.

This might've actually been the hit that led to J.T. Miller challenging Radko Gudas — either a case of mistaken identity or Gudas playing the role of designated fighter for Luostarinen.

The Canucks were essentially doing their best to hang on for the remainder of the period, as the Panthers dictated the play and gave Vancouver all they could handle in the defensive zone. But the great equalizer kept them in it: an equalizer named Sergei Bobrovsky.
Advertisement
Ad
Advertisement
Ad
With eight minutes to go in the first, Conor Garland got the puck along the left corner boards and drew the Panthers defencemen in before whipping a backhand pass right onto Jason Dickinson’s stick. Dickinson doesn’t get his full power behind the shot thanks to Frank Vatrano’s stick, but the puck slides under Bobrovsky’s pad before he can get a read on it. 2-1 Panthers.

It's a scoring period for sure, as Dickinson gives the Canucks a chance with this goal 👇

First, the good news. The Canucks actually outshot the Panthers 11-7 in the first 20 minutes, which seems impossible given which team was in the driver’s seat. But the Canucks also showed a significant change in their mentality from previous rough starts — the resiliency to keep pushing. And it paid off in the form of Dickinson’s tally and a one-goal game heading into the second.
Advertisement
Ad
Advertisement
Ad
With all that said, it was clear that the Canucks had their work cut out for them. It wouldn’t be a stretch to call this Panthers team the most talented one Vancouver’s faced in their 25+ years’ worth of meetings. But for once the Cats’ Achilles heel is the man in the crease.
The Canucks best chance at staying in this game involved throwing everything and the kitchen sink at Bobrovsky, who’s been struggling mightily of late. If Vancouver could keep Bobrovsky uncomfortable with tricky shots, they might sneak a few extra pucks into the net.

At first the Canucks appeared to get the Bobrovsky memo, because the second period was all Vancouver early on. At one point around midway through the second, the Canucks were dominating the shot count.
Tyler Motte got called on a bit of a soft penalty, and the Panthers’ power play pounced. Working the puck around a scrambling Canucks penalty kill unit, Jonathan Huberdeau gets all the time and space he needs to snap a shot that Sam Reinhart once again gets a piece of. 3-1 Florida.
Advertisement
Ad
Advertisement
Ad

First, we have Jonathan Huberdeau running roughshod over the #Canucks penalty kill to make it 3-1 Panthers. pic.twitter.com/3fvjK65Mbx

Just under 45 seconds later, the Canucks get victimized by an insanely pretty passing play. If Garland’s backhand spin pass was the appetizer, Anton Lundell’s between the legs sauce to Maxim Mamin was the main course. 4-1 Panthers.

Maxim Mamin is the recipient of an Anton Lundell back pass. 4-1 Florida. #Canucks pic.twitter.com/UZqcIngPUF

The Canucks did their best to stem the tide in the late stages of the frame, but Bobrovsky did put on an impressive display during a Vancouver power play, and then Florida put together a statement play with a minute remaining. After a faceoff in the Panthers’ end, Ekblad chips the puck out of the zone past Oliver Ekman-Larsson, before Aleksander Barkov turns on the jets and dekes out Demko on the breakaway. 5-1 Panthers.
Advertisement
Ad
Advertisement
Ad

There’s really only one takeaway from the Canucks and Panthers’ respective play during the second period; the difference between good teams and truly elite ones.
The Canucks weren’t playing particularly badly in the middle frame. If anything, their play improved from the first 20 minutes. But while Vancouver was forced to put together a barrage of shots to try and stay in this game, the Panthers have the speed and skill to turn any swing in momentum on a dime. And they showcased that ability thrice in the second period.

The pace of play calmed down slightly in the third period, with the outcome in little doubt. But the Canucks didn’t go away quietly either, a small testament to what a difference a month — and a coaching change — can make, outshooting the Cats 17-6 in the final 20.
Advertisement
Ad
Advertisement
Ad
You’d be hard-pressed to find a group that’s needed a goal more lately than the Canucks’ fourth line, and it came to fruition five minutes into the third. Brad Hunt got a quick shot away through a mess of skates that banked off both Tyler Motte and former Panther Juho Lammikko before settling in the net behind Bobrovsky. 5-2 Panthers.

Posting the Juho Lammikko goal for one nice highlight to go out on. #Canucks pic.twitter.com/EIun9oBVkU

From that point on the Panthers locked down the neutral zone and defensive zone, squashing any hope of another Canucks comeback in the process. Tanner Pearson won one last fight against MacKenzie Weegar in the final two minutes, but the Panthers won the war, ending the Boudreau Boost at nine games and keeping themselves ahead of the cross state rival Lightning in the race for the President’s Trophy.
Advertisement
Ad
Advertisement
Ad

It’s hard not to look in Jason Dickinson’s direction for player of the game honours, scoring just his second goal since October 21st and throwing four hits in just 12 minutes of ice time. J.T. Miller also made his presence known tonight with five shots and a first-period fight that seemed to rally the troops from a rough start.

Finding the happy medium between the Benning/Green Canucks of October and November and the Rutherford/Boudreau version from December on has never been more important than now. Tonight, we got a lot closer to figuring out what that looks like.
The Canucks look to be, in essence, a flawed but hard-working team that won’t let a bad scoreline stop them from competing. While they clearly didn’t have the horses to keep up with an absolutely stacked Panthers squad tonight, they did their best to punch above their weight class anyway and even got a few struggling forwards off the schneid in the process.
Advertisement
Ad
Advertisement
Ad
Bruce Boudreau’s squad didn’t play particularly poorly tonight. They just don’t seem ready to take on the absolute best teams in the NHL yet, and after how this season started, that’s perfectly fine. There are still four big games left on this road trip for us to get the full picture, but if you asked upper management after tonight, they’d probably tell you it’s already getting crystal clear.