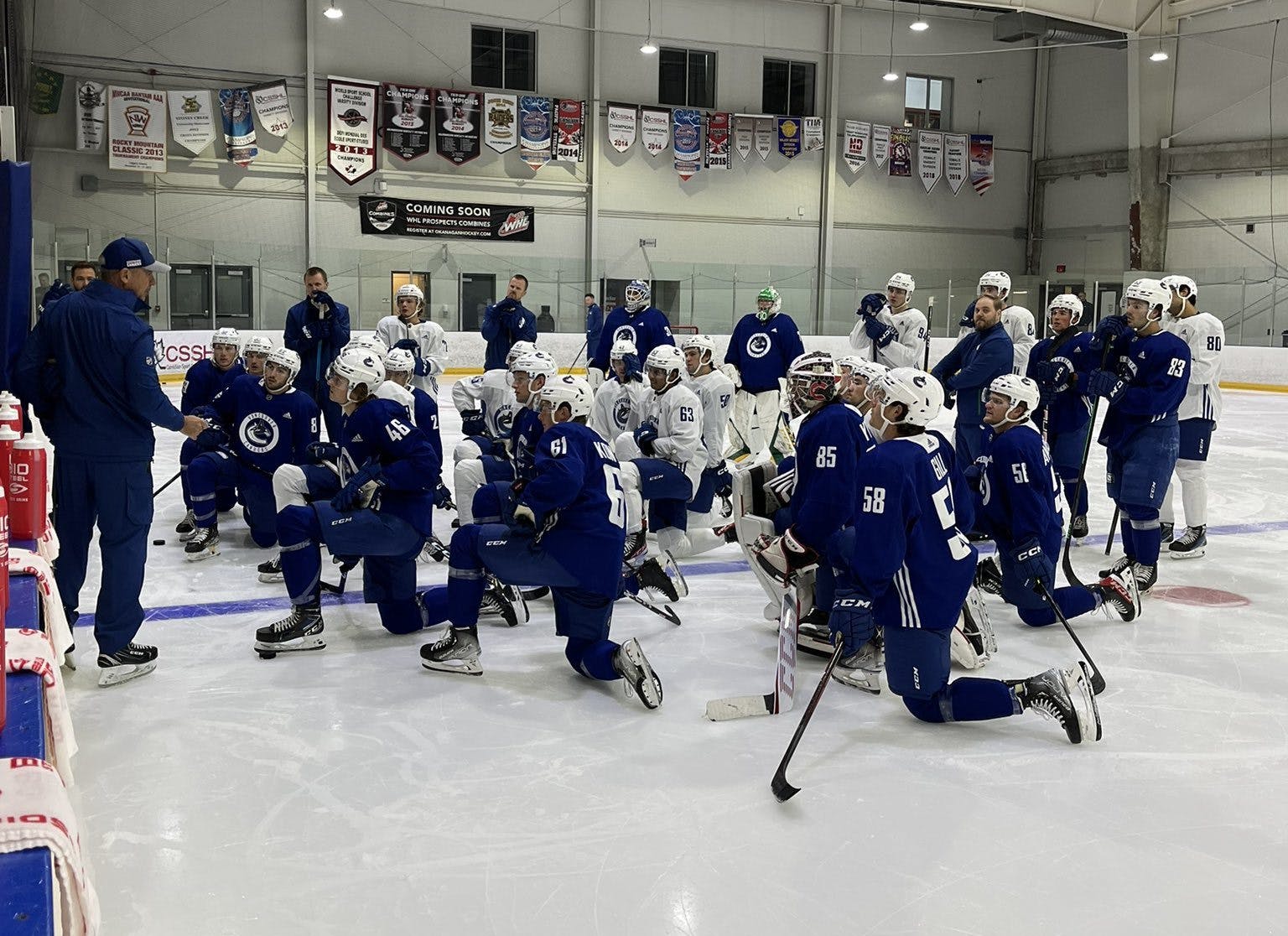 Photo credit: Vancouver Canucks on Twitter
By Lachlan Irvine
2 months ago
Comments
In some ways, the Vancouver Canucks’ prospects entered their Young Stars Classic finale against the Edmonton Oilers playing with house money.
They’d won their first two contests against Calgary and Winnipeg by a combined 7-1 scoreline, and gotten strong contributions from every part of their lineup.
But a few timely errors cost Vancouver their chance at a perfect record, as the Oilers walked away with a 5-2 win and the first place finish in Penticton. Linus Karlsson’s pair of goals pushed him into the tournament scoring lead, but it was all the offence the Canucks could muster.
Let’s take a look at some key parts of Vancouver’s final prospect tune-up.

While the full Canucks roster couldn’t piece together the same effort as their previous two games, Linus Karlsson seemed to get stronger as the tournament went on. His connection with fellow Swede Nils Aman has flourished throughout, and it came to fruition right after an Edmonton penalty expired to cut a 2-0 Oilers lead to one.
Advertisement
Ad
Advertisement
Ad
Defencemen Quinn Schmiemann also deserves plenty of credit for Karlsson’s first tally, as he held the puck in the attacking zone with pressure on him before feeding the puck into the slot.

In the third period, Karlsson scored one of the tournament’s nicest goals when he caught Oilers netminder Olivier Rodrigue cheating off his left post.
Karlsson floated the puck between the goalie’s pad and glove to tie the game at two early in the final frame.

Linus Karlsson with the cheeky bank shot from a bad angle for his second goal of the game to make it 2-2. #Canucks pic.twitter.com/o4eu62WxL2

After the game, Karlsson noted his confidence growing and the adjustments to playing on North American ice sticking as the games went along.
Advertisement
Ad
Advertisement
Ad
“The first game was not that good, but it went better and better over the tournament,” Karlsson said. “It’s fast, you don’t have that much time with the puck. So you have to be a little bit quicker out there, but you can get chances from anywhere.”

Linus Karlsson meets with the media following his two goal performance in the final game of Young Stars in Penticton.@ToyotaPacific | #Canucks pic.twitter.com/uaiOpy2Kks

To the Canucks’ credit, they didn’t play a particularly poor game overall. But the four times the Oilers beat Arturs Silovs came largely as a result of inopportune miscues or completely fluke accidents.
Defensemen Chad Nychuk had a particularly rough outing in that regard. Midway through the second period, Nychuk let centre Filip Engarås go to the front of the net and screen Silovs as Reid Schaefer, selected No. 32 overall by the Oilers in June, rifled home the game’s opening goal.
Advertisement
Ad
Advertisement
Ad

Reid gives us the lead. 🙂 pic.twitter.com/CzOVKjKkOS

On the Oilers’ second goal of the game, Nychuk gave 2020 first-rounder Dylan Holloway way too much room to cut towards the net, ultimately resorting to a lazy stick check as Holloway scored shorthanded.

Even after the Canucks worked to pull even, a strange bounce in the third period killed their momentum.
A Max Wanner shot took a strange deflection high into the air near the left faceoff dot, and Silovs completely lost sight of the puck as it fell behind him and into the net. The strange goal ultimately stood as the winner.

A goal is a goal, right? pic.twitter.com/fpHSjM4lS4

Even without the offence firing on all cylinders, many Canucks still had strong outings.
Former Vancouver Giants Tristan Nielsen and Alex Kannok-Leipert continued to show their strong work ethic and willingness to go to the dirty parts of the rink to win possession. Arturs Silovs allowed four goals, but they all came off grade-A chances (or the weirdest deflection he’ll see all year).
Max Namestnikov went undrafted in June, but his speed and intensity were impressive throughout Monday’s contest. He also earned himself teammate points by dropping the gloves with Darien Kielb after the Oilers defender threw a cheap late-game hit on Connor Lockhart.
And despite an undisciplined penalty during the second period that put the Canucks in a 4-on-3 situation, Danila Klimovich put forth an overall strong effort against Edmonton.
Advertisement
Ad
Advertisement
Ad
The 2021 second-round pick routinely put the Canucks in scoring situations, perhaps none better than this one in the first period.

Cleans up a broken play in the neutral zone, avoids multiple checkers, enters the zone with control and draws two defenders then hits a teammate with with a nifty pop pass to create a Grade-A chance. pic.twitter.com/vgDoe3hl5r

Except for Namestnikov, every one of these players will get opportunities to build off their Young Stars showings in Abbotsford. New Abby head coach Jeremy Colliton sees the early makings of a decent AHL team from these three games.
“I feel like I know them very well now after three games and some days together,” Colliton said. “That’ll help us hopefully hit the ground running once we do get going in October.”
Advertisement
Ad
Advertisement
Ad
The Canucks’ prospects will now pack their bags for Whistler. Training camp is slated to begin on Thursday, with the first preseason action against the Calgary Flames slated for Sunday.