Advertisement
Ad
Jack Rathbone tore up the AHL and was NHL-ready in January, and now he’s in Vancouver 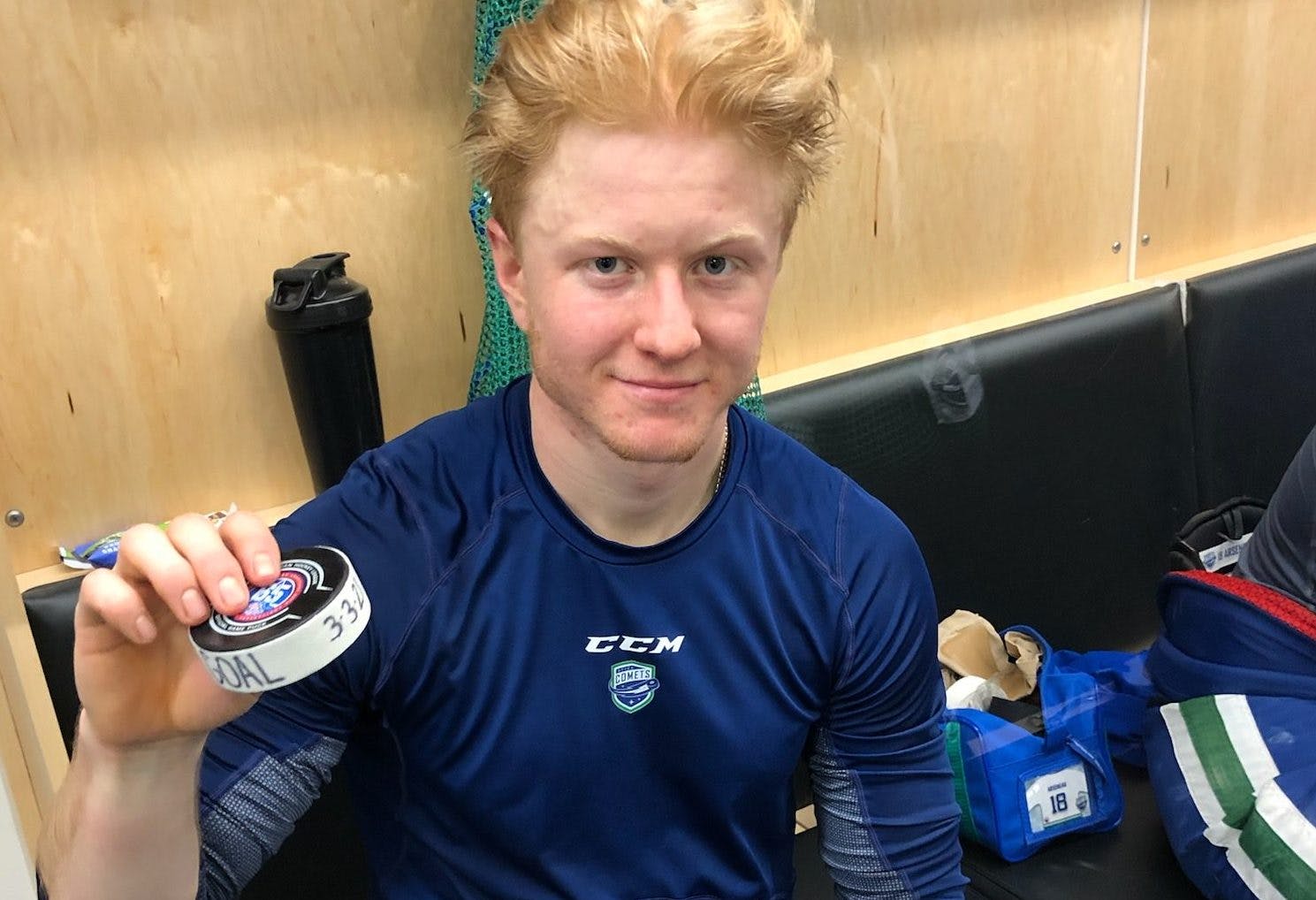 Photo credit: Utica Comets
By Faber
1 year ago
Comments
We are getting down to the end of the prospects rankings and with that, we are also nearing the top.
The Canucks took a late-round swing on the offensive high school defenceman back in the fourth round of the 2017 NHL Entry Draft. That draft is beginning to look like Jim Benning’s best as he left with Elias Pettersson, Kole Lind, Jonah Gadjovich, Mikey DiPietro and Jack Rathbone when all was said and done.
Rathbone was the fifth player selected by the Canucks in that draft but he could end up being the second-best pick when we look back at this draft.
There are a lot of things to like about Rathbone’s game. He is a left-shot defenceman who skates very well and has a gorgeous-looking shot. Most importantly, however, he can move the puck like an NHL defenceman at 21-years-old.
The first thing that has popped off the screen during his first professional season has been his breakouts.
Advertisement
Ad
Advertisement
Ad
Rathbone is a good skater. Not just a good skater for his age, but a good skater compared to NHL speed. In his eight AHL games this season, he has impressed everyone in the Comets organization from his teammates all the way up to his head coach Trent Cull.
Cull raved about the young defenceman after his first pro game. “Jack walks the line in the o-zone as good as anyone I’ve seen in this league,” said Cull. “He’s such a good student, he wants to learn and he’s just a really good kid. Then you see how he snaps pucks and has that ability to move it and do it at a really good level. It’s something that’s a blessing. Every coach loves that, you love when a guy can snap and move pucks because that means you’re not spending time in your D zone.”
Advertisement
Ad
Advertisement
Ad
There is certainly a high ceiling for Rathbone with his offensive potential. His shot is already pretty dang hard but the thing that is most impressive is just how the shot looks. It’s a beautiful shot that looks like it has room to grow into being one of his major strengths in the future. Right now, he sets that shot up with the quick movements that he is able to make with the puck at the line.
He’s got this little fake-shot jump step that opens up space for him on the left side of the zone as he uses it to attack the goaltender. It’s something we have consistently seen in the AHL and noticed at Canucks training camp as well.
Here’s an example from the AHL:

It’s definitely his move. In speaking with fellow Canucks prospect Aidan McDonough, who happens to be a lifelong friend of Rathbone, he said that Jack’s fake shot, deke is known throughout the Massachusetts area.
The weak parts of Rathbone’s game are going to be his size and strength. Rathbone is 5’11”, so he isn’t short but also isn’t going to overpower many players in the corners. He is listed at 190 lbs and doesn’t get pushed around a ton but definitely isn’t going to have immediate strength as a plus-level skill at the NHL.
Defensively, he is very smart and knows when to pressure defending off the rush. He has an active stick and from the viewings I had of him in the AHL this season and a limited amout of viewings in the NCAA, I’d think that his active stick is going to be a great boost to his defensive game when he does eventually play in the NHL. He reacts quickly in the defensive zone and does a good job of simply clearing the puck into the corner to disrupt possession in his own zone.
Advertisement
Ad
Advertisement
Ad
The hope is that Rathbone’s impressive start in the AHL will mean a smooth transition to the NHL. He has recently been called up to the Canucks and if the team wants to give some young players a shot, Rathbone should be near the top of that list.
He looked like he has a shot at making the team out of training camp as his skills were on full display and he didn’t look out of position against what was a majority of NHL calibre players.
It’s clear that there is an NHL future for Rathbone. The question is will it be a Derrick Pouliot type of career or will he hit his ceiling and be a Torey Krug type of offensive defenceman. With Quinn Hughes on the Canucks, it does mean that there will be similar left-shot defencemen on the roster but this is the way that the NHL has been moving towards for years. If you can move the puck, skate well enough and have an active stick while defending, you can carve out an NHL career.
Advertisement
Ad
Advertisement
Ad
Rathbone has all those skills and has displayed them on almost all of his AHL shifts this season. He clearly plays defence at a level that is too good for the AHL and should be given a shot in the NHL this season to see if he can continue his success at the highest level of hockey.
In what felt like overconfidence in prospects a couple of years ago, the Canucks could realistically have a defence core where the left side consists of Hughes, Rathbone and Juolevi as soon as this season. These three could be the backbone of the defence corps if Rathbone is able to find offence at the NHL level and hold his own in the defensive zone against the best scorers in the world.
There’s not much to knock in his game from what we have seen him do this season at the AHL level.
Advertisement
Ad
Advertisement
Ad
That is exactly what we hoped he could do when he was sent down back in February. Rathbone is a high-end NHL prospect and that is why he comes in at number two on my prospects rankings list.