Advertisement
Ad
Bo Horvat’s season ended at the worst possible time, but was still the best of his career to date: 2021/22 Year in Review 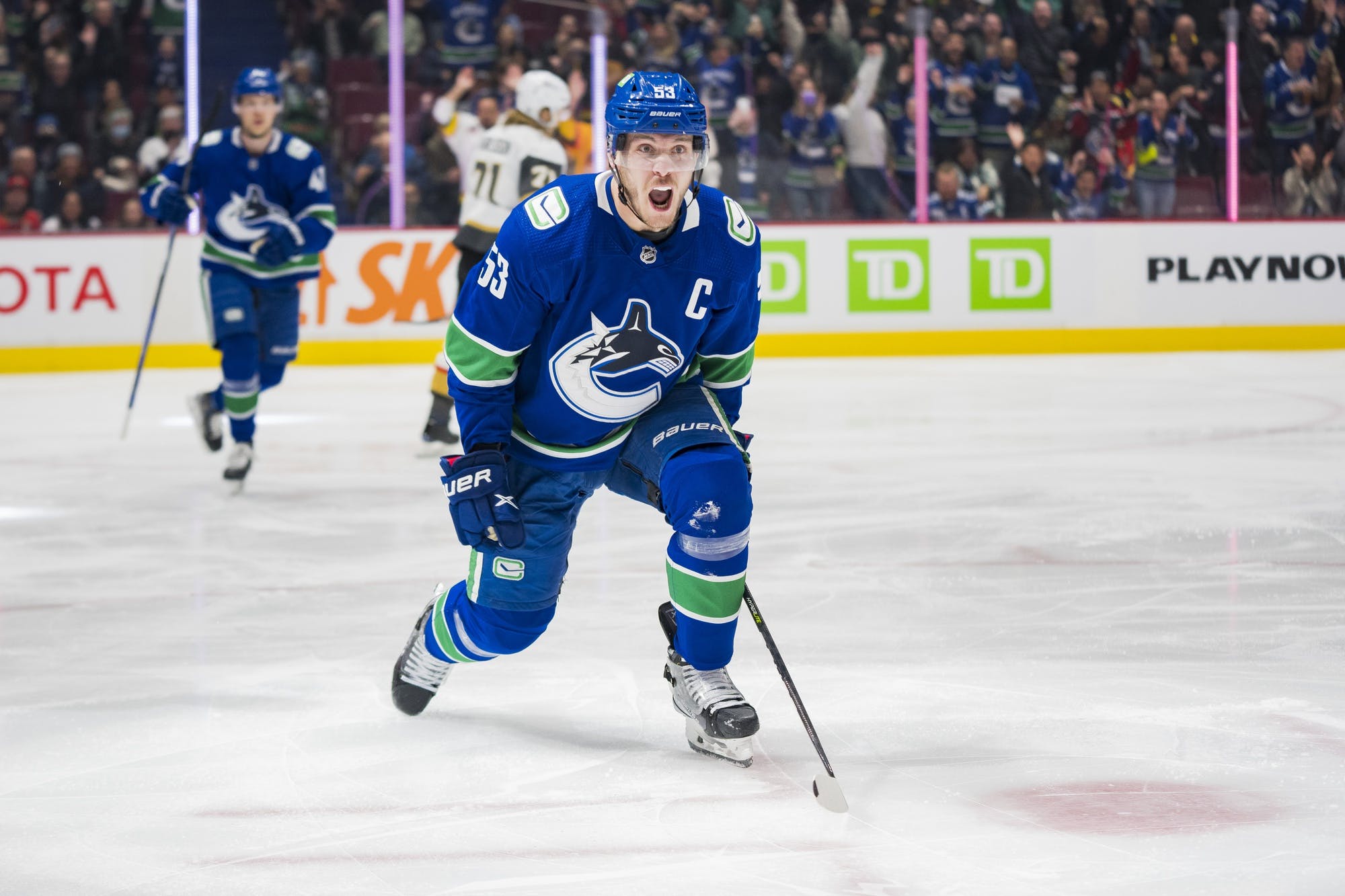 Photo credit: © Bob Frid-USA TODAY Sports
By Stephan Roget
8 months ago
Comments
Bo Horvat’s 2021/22 season ended two weeks ahead of schedule on April 14, 2022. The captain of the Vancouver Canucks made an awkward-looking shot block with the back of his calf, breaking the end of his tibia and effectively breaking off any slim chance his team had of chasing down a playoff spot.
The Canucks won the next game after Horvat’s injury, then proceeded to drop all three after that, firmly eliminating themselves from contention.
All in all, it was a disappointing end to the year for the 27-year-old Horvat, but that shouldn’t take away from what was probably the best season of hockey in his career to date.
In just 70 games, Horvat reached a new career high in goals, cracking the 30-goal mark for the first time ever. That put him one goal off the team lead, co-held by Elias Pettersson and JT Miller, each of whom had 32 goals in 80 games.

The rest of his offensive statline paced at or near his prior best performances, despite some trying circumstances and the difficulty of his deployment.
Missed time aside, Horvat’s per-game paces and percentages make it clear that his game took a step forward in 2021/22. He blew his previous goals-per-game rate out of the water, and his overall points-per-game was right in line with his other best seasons.
Advertisement
Ad
Advertisement
Ad

Faceoff-wise, Horvat was better than ever, and better than anyone else in the NHL not named Patrice Bergeron.
There may be some cause for concern if Horvat’s shooting percentage was also well over and above where it normally is, but that wasn’t the case. His 16% was the highest of his career, but not by any great margin — so there’s no reason to fear a sharp regression in 2022/23. Horvat shot, and scored, from just about everywhere this past season, and it shows.
From HockeyViz.com
The only stat column that stands out as lackluster is the assists. Even measuring on a per-game basis, Horvat’s helpers lagged well behind what he usually provides. There’s a multitude of explanations for why that might be, but it starts with a rotating cast of inconsistent wingers.
Advertisement
Ad
Advertisement
Ad
From Dobber’s Frozen Tools
Horvat spent time with ten different line combinations at even-strength in 2021/22, and found vastly different results with each. He and Tanner Pearson displayed their usual chemistry, but all three of Conor Garland, Nils Höglander, and Jason Dickinson struggled to produce consistently while on Horvat’s wing despite ample opportunity.

Horvat’s best stretch of the season came alongside the rookie Vasily Podkolzin and the veteran PTO Alex Chiasson, but that line combo was only together for a couple of games.
It’s also worth noting at this juncture that while Horvat’s linemates may have been inconsistent, he was certainly not. He, like the rest of the team, had a bad stretch in November — going seven games without a point — and again in late January/early February. That second slump of three points in eight games came as Horvat recovered from another bout with COVID-19, one that he reported as much more taxing than his first encounter with the virus.
Advertisement
Ad
Advertisement
Ad
And let’s not forget the fancy stats.
Even-strength stats via NaturalStatTrick.com
The first number that jumps out is that on-ice shooting percentage of 7.77%, easily the lowest he’s ever had to deal with. Combine that with Horvat’s own 16.0% on the year, and it paints a pretty clear picture of a center surrounded by snake-bitten linemates. Suddenly, that low amount of assists makes a lot more sense.
In terms of possession, shot control, and scoring chance control, Horvat didn’t just set new career records, he finished above 50% for the first time in his career. That meant that Horvat’s line set the tone and the pace of play whenever they were on the ice.

Horvat up high to tie the game! ⬆️🤩

The expected goals and high-danger chance numbers are a little lower than the rest, but there’s a reason for that — and that particular context is what truly makes this season stand out as Horvat’s very best.
Advertisement
Ad
Advertisement
Ad
As has been the case in the past, Horvat played a shutdown role for the Canucks in 2021/22 almost by default. The initial plan was for Dickinson to come in and fill that role so that Horvat could be unleashed into a more offence-focused deployment, but that obviously didn’t work out.
From HockeyViz.com
Horvat and his line were put out against the opponent’s top-six on a very regular basis, and they started a majority of those shifts in their own end. That’s the reality of being a shutdown center. But whereas Horvat had previously struggled to find much success in such a role, in 2021/22 he finally figured it out — and it couldn’t have come at a better time for the Canucks.
Horvat’s line went out against the best the opposition had to offer on a nightly basis. When the Connor McDavids of the league hit the ice for an offensive zone faceoff, they could count on Horvat waiting for them in the circle nearly each and every time. On many shifts, Horvat and his linemates had to recover the puck in their own zone, break it out, and bring it down the ice to the offensive zone — and yet, based on his possession numbers, they succeeded more times than they did not.
Advertisement
Ad
Advertisement
Ad
At even-strength, Horvat stared down the best players in hockey and scored just as much as they did. On the power play, he racked up 19 points. He also killed more than a minute of penalties per game for the first time in his career, and found success there, too.

Really, there wasn’t anything that Horvat didn’t do and do well for the Canucks in 2021/22.
And while the story didn’t end anywhere near the way he would have wanted, there’s still plenty of reason for celebration.
Celebrate that, at the age of 27, Horvat is still getting better and entering the prime of his career. Celebrate that all reports indicate that he wants to stay in Vancouver beyond the end of his current contract, and that we could hear news on an extension by July.
Advertisement
Ad
Advertisement
Ad
Celebrate the birth of Horvat and wife Holly’s second child, daughter Tulsa, born the day after the Canucks’ season officially ended.
With that broken tibia still needing a few more weeks of rehab, Horvat will have plenty of time at home with Tulsa in the near future. After that, it’s on to a full offseason of training and preparation for a 2022/23 campaign in which the postseason will be a clear and definitive goal.
Expect Horvat to return even more motivated to perform for his team. Even coming off the best season of his career, he’s never been one to rest on his laurels.