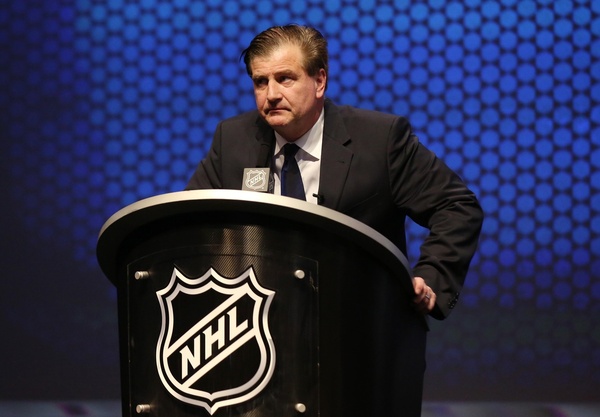 Photo Credit: Bill Streicher/USA TODAY Sports
Jim Benning’s OHL scouting trip was rather impressive, catching 6 games in 8 days. To recap, here was his schedule:
Over the course of the 8 days, Benning managed to view all top OHL prospects, including every OHLer ranked by TSN”s Craig Button’s in his top 30. Here’s a recap of some of the highlights of Benning’s trip:
Max Jones – London Knights (ISS #3, PCS pace 21%)
Max Jones gave Benning quite a viewing, with two points and a pair of fights. According to friend of the blog, OHL scout Todd Cordell, Jones has been a 67% possession playing on the Knight’s second line and is able to enter the offensive zone with control 80% of the time. Both metrics are impressive. It’s hard not to like what Jones brings to the table. He goes hard to the net, has elite tools, and he plays with an edge. Here he is cruising through the neutral zone with ease, before absolutely laying out a Guelph defender.
Advertisement
Ad
Advertisement
Ad
Matthew Tkachuck – London Knights (ISS #4, PCS pace 62%)
Benning got to witness the Tkachuk, Mitch Marner, and Christian Dvorak line absolutely torch the Guelph Storm on route to a 10-4 blowout. Tkachuk himself was full value in this one, his elite skill set on display for a 1 goal, 4 point night. The Canucks would really have to Torts up the rest of their season to be in any position to pick Tkachuk, but as far as pipe dreams go, it’s a good one.
Here is the prettiest Tkachuk highlight of the game, with him and Marner showing off some ridiculous passing:
Jakob Chychrun – Sarnia Sting (ISS #2, PCS pace 15%)
Like Tkachuk, it’s highly unlikely the Canucks will be in a position. He’s seen a slight dip in production this year as compared to his 16-year-old season, but excellent in his game against Saginaw. Here Chychrun opens the scoring with a lethal wrist shot:
Advertisement
Ad
Advertisement
Ad
Alex Nylander – Mississauga Steelheads (ISS #7, PCS pace 34.4%)
If there is rule Jim Benning should have learned by now, it’s not to pass on a Nylander at the draft. Nylander and Mcleod were quiet against the Erie Otters in Benning’s first viewing but lit up Sudbury in Benning’s second viewing. Here is Nylander showing off his top end slap shot:
Michael McLeod – Mississauga Steelheads (ISS #6, PCS pace 28%)
McLeod had an impressive game against Sudbury, showing excellent speed, passing, and playmaking abilities. McLeod and Nylander have developed amazing chemistry together since Nylander joined the team this season. I went through the Steelhead game sheets, and the two have been on the ice together for approximated two-thirds of their shifts at even strength, as we can see, both players have been good separately, but when they play together they significantly tilt goal differential in the Steelheads favor:
Advertisement
Ad
Advertisement
Ad 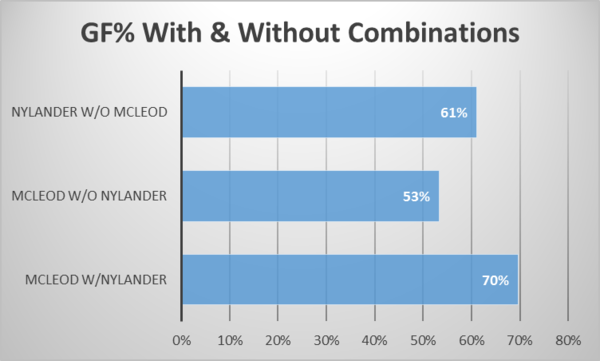 Here he is finishing off an impressive feed from linemate, Nick Bastian:
Logan Brown – Windsor Spitfires (ISS #8, PCS pace 70%)
Big centers like Brown (6’6, 218lbs) who have the type of offensive package he does are exceedingly rare, and they typically go on to successful NHL careers. Based on the 23 points he’s scored in his first 16 games, he’s on pace for a stellar 70% PCS, in a cohort which includes players like Brendan Shanahan, Trevor Linden and Vinny Lecavalier. He was relatively quite in his game against a solid Erie team, but he did set up this goal:
Alex Debrincat – Erie Otters (ISS unranked, Button #24, PCS 40%)
Benning saw the Otters play three times in his trip, and the Debrincat, Strome, and Raddysh line was absolutely dynamite in every game. I’m always a bit leery of the point totals put up by players that get to play along with guys like Dylan Strome, but to my eye neither Raddysh nor Debrincat were passengers. Debrincat is absolutely torching the OHL (27 goals and 41 points in 20 games. Benning loves him (compared him to Johnny Gaudreau), PCS loves him (Pat Kane is in his 40% PCS cohort), and the eye test loves him. Here he is turning on the jets to lose Michael McLeod for the goal:
Advertisement
Ad
Advertisement
Ad
Taylor Raddysh – Erie Otters (ISS unranked, Craig Button #29, PCS pace 41%)
Probably the most interesting player for me during this road
trip with Benning was Taylor Raddysh. The 6’2, 200 lb right winger has amassed
33 points in his first 22 games of the season, which is a stat line that should
make him an automatic first round pick, but it appears his play has been
discounted by many scouts early on due to the signal boost he receives from
playing with Dylan Strome and Alex Debrincat, who he’s played an estimated 70%
and 85% of his even strength shifts with, respectively. To dig a bit deeper
into the impact of his teammates on his production, I culled through the Erie
game sheets to calculate goals for differential for the Erie top line: 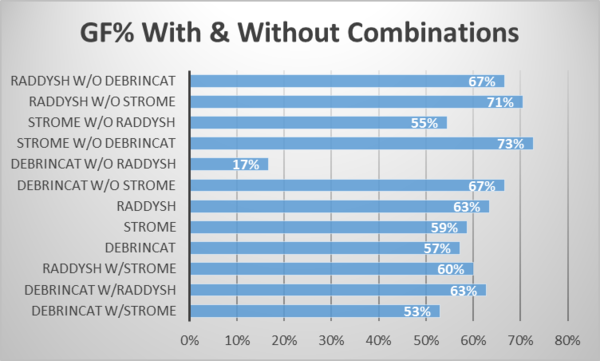 What we see in the graph above, is that the Erie linemates
tilt goal differential across the board, and Raddysh looks to be a key part of
that, so during the Erie games, I looked closely to see if Raddysh was for
real, or if he was waterskiing behind his talented line mates. I have to say I
was really impressed with what I saw.
Advertisement
Ad
Advertisement
Ad
Here is an example, with Raddysh cruising through the
neutral zone to thread a beautiful pass to Debrincat:
Closing Thoughts
This is a list of the players he viewed and where TSN’s Craig Button ranked them. I’ve highlighted players from Mississauga and Erie, who Benning viewed twice and three times, respectively:
Not to read too much into Benning’s choice of which games to watch, it was interesting to see that Benning chose to see players like Taylor Raddysh, Alex Debrincat, Michael McLeod, and Alex Nylander on multiple occasions.
If Benning were to be able to acquire one or two late first, or early second round picks, by say trading Radim Vrbata and Dan Hamhuis before the deadline, I would not be surprised at all to see him use a pick in that range to select a player like Alex Debrincat or Taylor Raddysh based on their sparkling showings during this scouting road trip.
Advertisement
Ad
Advertisement
Ad

Others in this series: