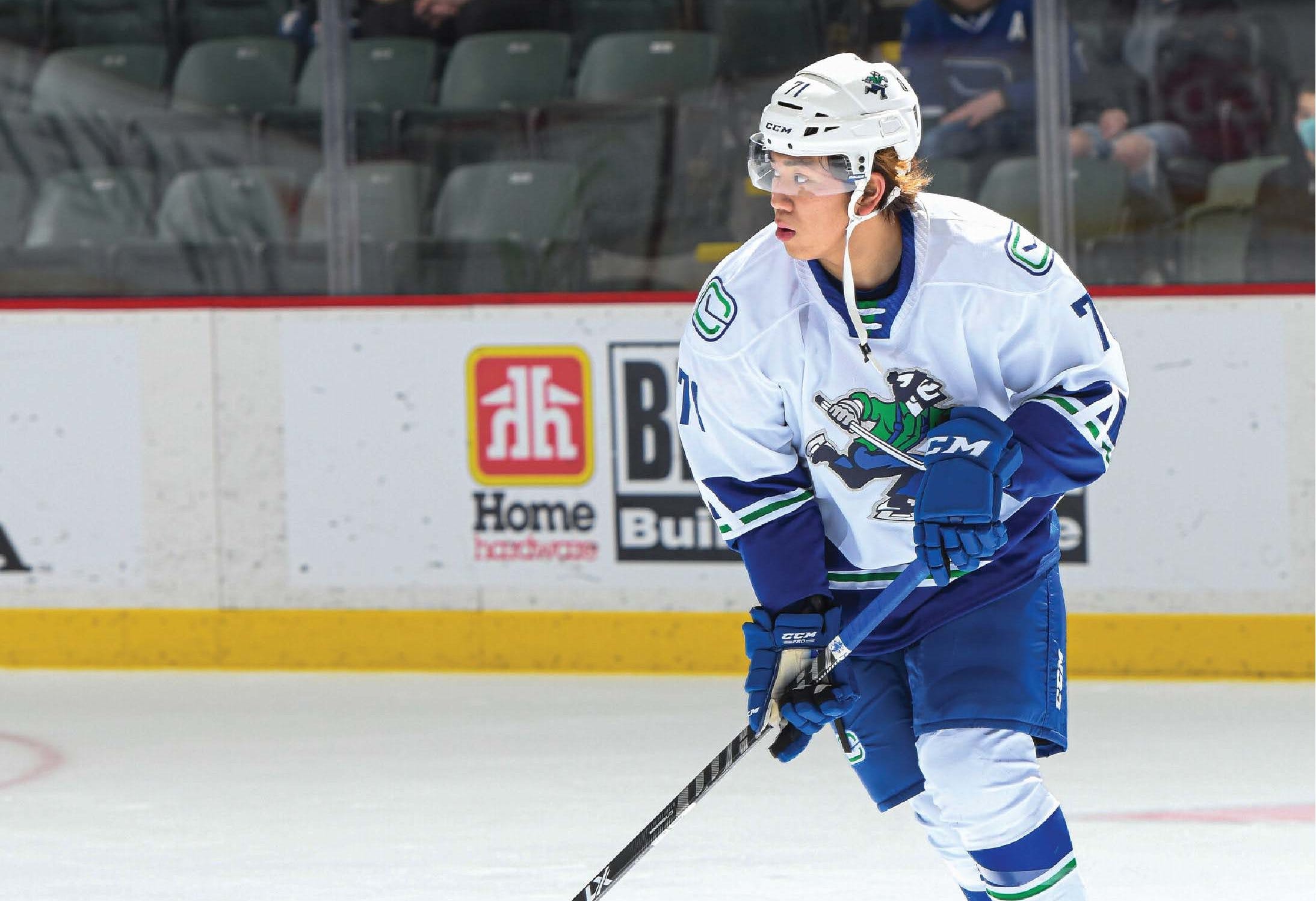 By Mike Gould
10 months ago
Yushiroh Hirano is on the board.
Hirano was included in the Abbotsford Canucks’ starting lineup for their game against the San Diego Gulls on Saturday. The 26-year-old winger wasted no time in opening the scoring for his team — and, in the process, becoming the first Japanese-trained player to score a goal in the American Hockey League.
After winning the game’s opening faceoff, the Canucks quickly managed to get a two-on-one scoring opportunity in the Gulls’ zone. Canucks forward @Nic Petan feathered a pass over to the left side for the product of Tomakomai, Japan to one-time past San Diego goaltender @Francis Marotte.
Hirano’s first AHL goal came just 10 seconds into the first period of Saturday’s game. Petan and @Noah Juulsen picked up the assists on the milestone marker.
Hirano, who stands 6′ and weighs 216 pounds, has taken a long and winding road to reach the AHL.
He entered the Swedish hockey ranks with the Tingsryds AIF junior club in 2014–15 after spending preceding seasons playing at Shirakaba Gakuen High in Japan. Hirano also played for Japan’s national U18 and U20 teams at various lower-tier World Junior tournaments.
Hirano made the jump to North America for the first time as a 20-year-old, playing for the 2015–16 Youngstown Phantoms in the USHL. He ranked third on that team in scoring with 46 points in 54 games, finishing behind NHL-affiliated prospects @Cam Morrison and @Chase Pearson.
After returning to Japan to play two seasons in the Asia Leauge with the Tohoku Free Blades, Hirano joined the ECHL’s Wheeling Nailers in 2018–19 and immediately established himself as a valuable player at that level.
Hirano spent two seasons with the Nailers and amassed 32 goals and 88 points in 119 games. He also earned a one-game AHL callup with the Wilkes-Barre/Scranton Penguins in 2018–19, tallying his first AHL assist in the contest.
On Jan. 5, 2022, the Abbotsford Canucks signed Hirano to a professional tryout opportunity. He had started the 2021–22 season with the ECHL’s Cincinnati Cyclones, piling up 16 goals and 29 points in 25 games.
Hirano made his AHL debut with the Canucks on Jan. 7, firing two shots on goal in a 4–3 overtime loss to the Bakersfield Condors. He’s taken at least one shot on goal in all seven of his AHL games to date, including Sunday’s rematch against the Gulls currently in progress.
The Canucks ultimately won Saturday’s game by a 5–3 score. In addition to Hirano’s goal, @John Stevens scored twice for Abbotsford and @Will Lockwood and @Ashton Sautner both tallied once.
In the aforementioned rematch game, the Canucks currently trail the Gulls by a 2–1 score late in the first period.
Uncategorized
Recent articles from Mike Gould