Wyatt Kalynuk is more than your average depth signing By Noah Strang
6 months ago
The Vancouver Canucks were active during the early part of the NHL’s free agency period, making several signings. While the most notable signings were forwards — namely Ilya Mikheyev and Curtis Lazar — the Canucks did add depth to their defence group with some two-way contracts.
One of the defencemen that the Canucks managed to come to an agreement with is Wyatt Kalynuk. At first glance, it’s easy to pass over this signing as inconsequential. However, a closer look at Kalynuk reveals an intriguing player that is a good addition to the organization, especially considering the low commitment needed to sign him.
The Canucks are severely lacking organizational depth. The lack of draft picks, and misuse of the ones they did have, over the past few seasons has left the cupboards bare. While signing a 25-year-old seventh round pick with 26 career NHL games under his belt isn’t going to solve that issue, it does help.
Kalynuk is a late bloomer that has shown an intriguing set of offensive skills from the blue line. He’s still young enough where he could add to his game and become a legitimate NHL contributor. Even if he doesn’t, Kalynuk is an intriguing player to add to the system that can help Abbotsford while providing a call-up option for the big club.
More than your average depth signing, Kalynuk is exactly the type of lottery ticket that the Canucks should be acquiring. While he’s only played a few games in the NHL, he’s shown enough during those periods that Canucks fans should keep a close eye on his play this year.

Kalynuk’s hockey roots trace back to the town of Virden, Manitoba, a town with a population of a few thousand. He played with the Virden Minor Hockey Association and made countless fans that now follow his NHL career closely.
“Always one of the best guys in the room. It didn’t matter how good you were at hockey; he was always there to help whenever needed and just be a good friend,” said Kyle Braybook, a childhood teammate, in an Empire Advance story on Kalynuk. “The second thing would be just how skilled he was and, if you dug a little deeper, you realized it was because of the unrelenting work ethic he had.”
Eventually, Kalynuk made his way to the University of Wisconsin. He played three seasons in the NCAA. Here are his stats compared to other Canucks prospects that have played at that same level in recent years.

NCAA stats of Canucks defenders
In his final season at the University of Wisconsin, Kalynuk was the team’s captain, named to the First-Team All Big Ten, named to the Big Ten All-Academic Team, and was a Big Ten Distinguished Scholar. He signed as a free agent with the Chicago Blackhawks after failing to come to an agreement with the Philadelphia Flyers who drafted him in the final round of the 2017 NHL Entry Draft.

What does Kalynuk bring to the table?

Kalynuk has shown an ability to get on the scoresheet at every level he’s played. Because he’s managed to put up points, he projects favourably in models such as the one below that heavily considers raw point totals. 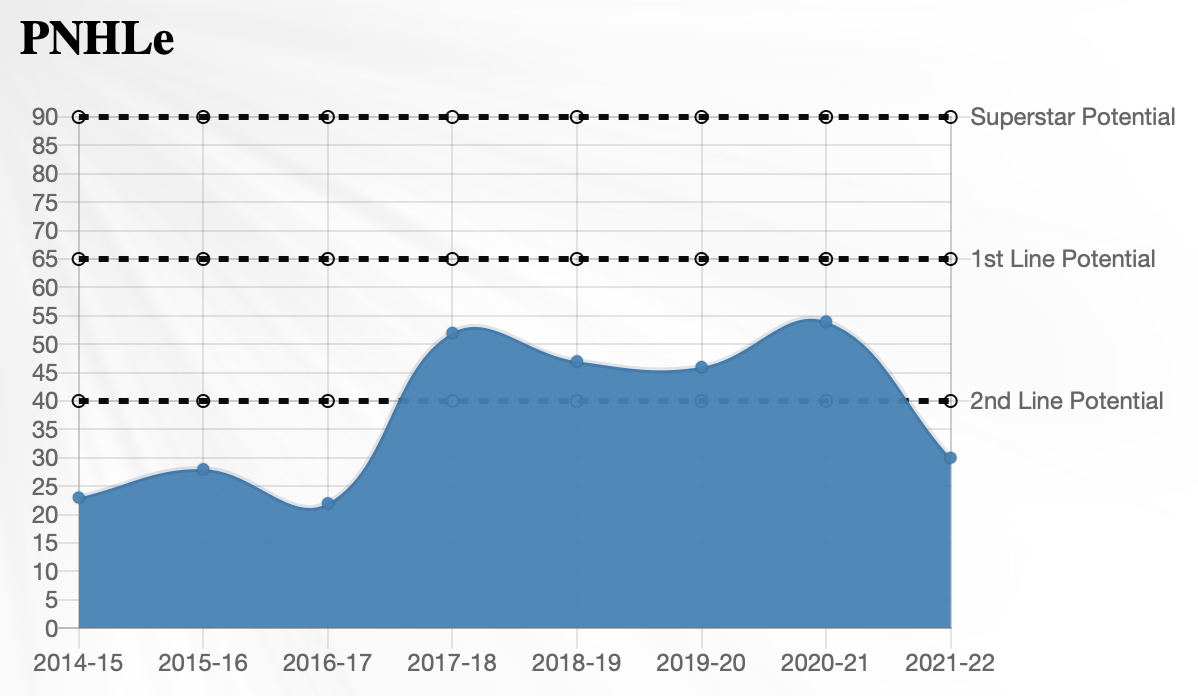 A left-shot defenceman, Kalynuk is a smooth skater that can wheel his way out of trouble. He likes to jump up into the play and can act as another dangerous option on any offensive attack. During his rookie season, Kalynuk managed to score 9 points in 21 games, which is very good production for a player seeing his first NHL action.
He’s not the biggest or most physical defenceman and for that reason, he can sometimes struggle in his own zone. Despite the good point production during his brief NHL cameo, Kalynuk’s advanced stats were concerning. The Blackhawks were outplayed, out-chanced, and outscored while he was on the ice at 5-on-5.
Defensive struggles are normal for most young defencemen and the Blackhawks’ struggles as a team only exacerbated this issue. The next step in his journey is going to be for Kalynuk to show that he can be relied upon to play solid defence against NHL competition.

What should expectations be for Kalynuk?

Kalynuk’s one-year, two-way contract is essentially a “prove-it” contract.
Kalynuk has a history with new Abbotsford Canucks head coach Jeremy Colliton. He played under him in Chicago and that previous relationship should help Kalynuk earn the trust of the coaching staff with the AHL team.
If Kalynuk can stand out in the AHL this season and earn a showing with the NHL club, that should be considered a success. The Canucks brutal travel schedule always leads to injuries and there will be opportunities for depth defencemen to slide into the lineup.
This signing cost the Canucks next to nothing and they managed to add a player with exciting offensive potential. No free agent signed for under a million dollars is going to come without flaws and Kalynuk definitely still has areas of his game he needs to work on. However, this is exactly the type of player that the Canucks need to be adding to the system.
More from CanucksArmy:
Uncategorized
Recent articles from Noah Strang