Advertisement
Ad
The Calgary Flames may be imploding right before our eyes: Around the Pacific 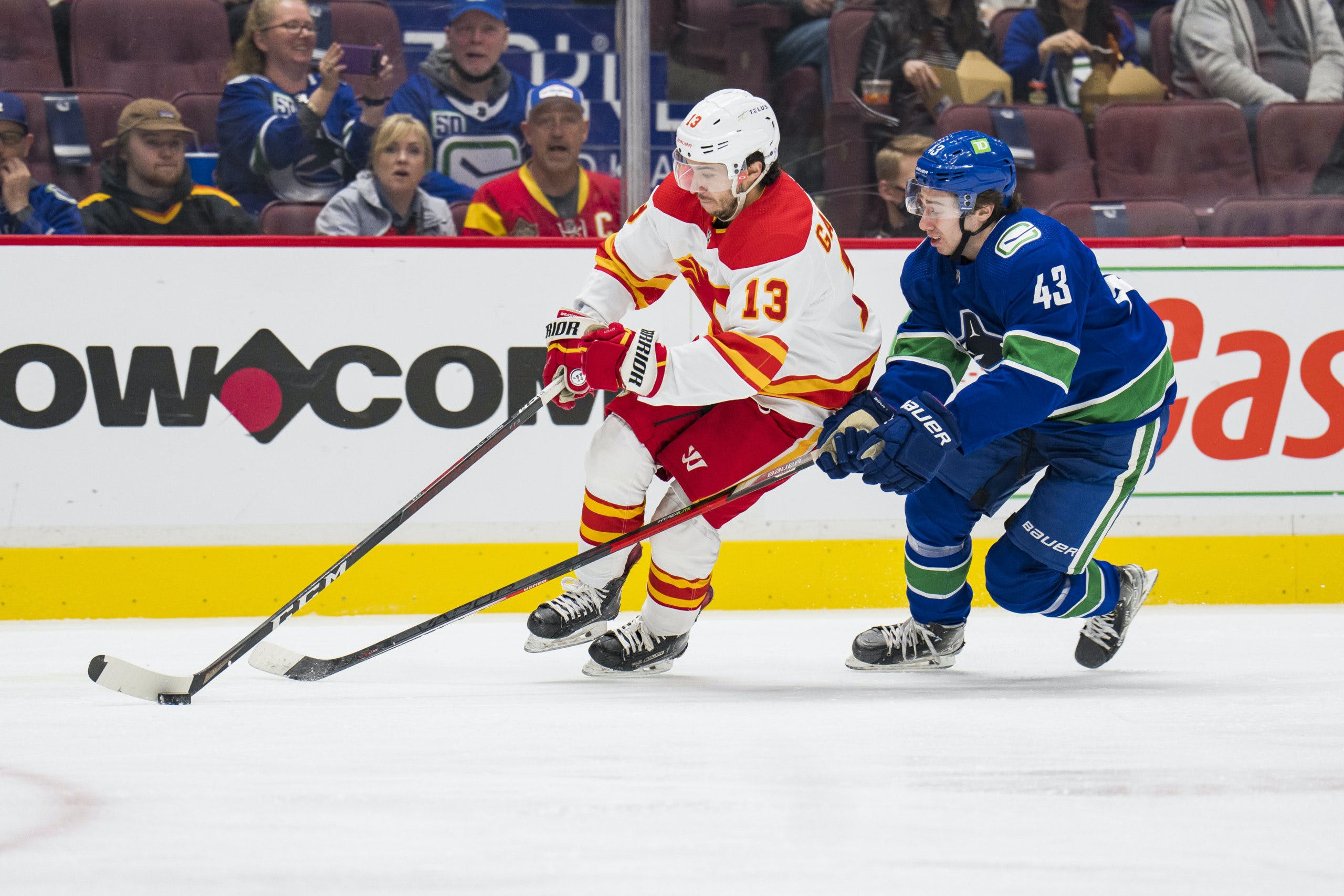 Photo credit: © Bob Frid-USA TODAY Sports
By Noah Strang
6 months ago
Comments
Last season, the Calgary Flames finished with 111 points, good enough to win the Pacific Division and establish themselves as legitimate Stanley Cup contenders. Only a few months later, the franchise is staring down the very real possibility of a long and ugly rebuild that could take many years.
How did this fall from grace happen in such a short period of time for the Flames? And what can the Canucks take away from it?
The Flames imploding would mean another playoff spot open to Pacific Division teams. The Canucks finished just a few points outside of a playoff spot last season and have bolstered their forward depth. Could the Flames faltering be just what the team needs to make the postseason?

The Flames entered this offseason with star forward Johnny Gaudreau free to choose his own destiny as an unrestricted free agent. While he’s been a strong player for a while, Gaudreau took his play to the next level last season as he scored 40 goals, had 115 points, and was a Hart Trophy candidate.
It was reported by Frank Seravalli that the Flames offered their star forward a contract worth more than $80 million over the course of eight years. There are only eight forwards across the entire league with an average annual value of more than $10 million.
Advertisement
Ad
Advertisement
Ad

My sense is #Flames have put an offer on the table for Johnny Gaudreau – north of $10 mil x 8 years – that would make him not only highest-paid player in Calgary franchise history, but among richest in #NHL.

If Gaudreau walks, it likely won't be because of money.

When Gaudreau decided to sign with the Columbus Blue Jackets instead, inking a much smaller contract worth $68.25 million over seven years, he left at least $15 million on the table. This sent the Flames organization into a panic, especially with it being reported that Flames management found out about Gaudreau’s decision just shortly before the news went public.
The fallout from Gaudreau’s decision has just meant more bad news for the Flames. Restricted free agent Matthew Tkachuk now seems to be unwilling to make a long term commitment to the organization. The Flames elected to take him to arbitration but that decision seems to just be delaying the inevitable: a trade for a bundle of prospects and picks.

Is it time for a full rebuild in Calgary?

Matthew Tkachuk scored 42 goals last season and had 104 points. He’s still just 24 years old and plays a bruising style that any team would love to deploy. If traded, he should fetch a large haul that could be the start of a quick rebuild in Calgary.
Advertisement
Ad
Advertisement
Ad

It wasn’t long ago that Canucks fans were watching fan-favourites depart the Pacific Northwest and make the move to Alberta. Jacob Markstrom and Chris Tanev were two long-time Vancouver Canucks that signed in Calgary following the 2019-20 season. Both of those players now seem likely to be traded to contenders for future assets if the Flames do decide to kickstart a rebuild.
It wouldn’t be surprising to see the Flames also get assets out of players like Tyler Toffoli and Blake Coleman. There are some young defencemen on the roster that would make it easier to start the process in Noah Hanifin, Rasmus Andersson, and Juuso Välimäki. Building around those three players on the backend is a good start, though a process that will still take multiple years of lottery picks.
Advertisement
Ad
Advertisement
Ad

The dangers of free agency

Johnny Gaudreau leaving with nothing to show for it has put the Flames in a very difficult position. While J.T. Miller isn’t quite as good as Gaudreau, and not as important to the Canucks future success as Gaudreau was to the Flames, it would still be devastating to see him walk next summer.
Letting Miller enter next summer without an extension would be a massive mistake for the current management group, even if it did help the Canucks make a small playoff push next season.
The Flames’ sudden fall from grace shows how small your contending window can be in the NHL. After last season, many would have said that the Flames had a good mix of veterans and players about to hit their prime. It seemed as if that was just the first playoff run with more to come. Instead, it’s a stark reminder about how difficult it is to win in the NHL and how tough it is to build a team that can contend for many years.
Advertisement
Ad
Advertisement
Ad
More from CanucksArmy: